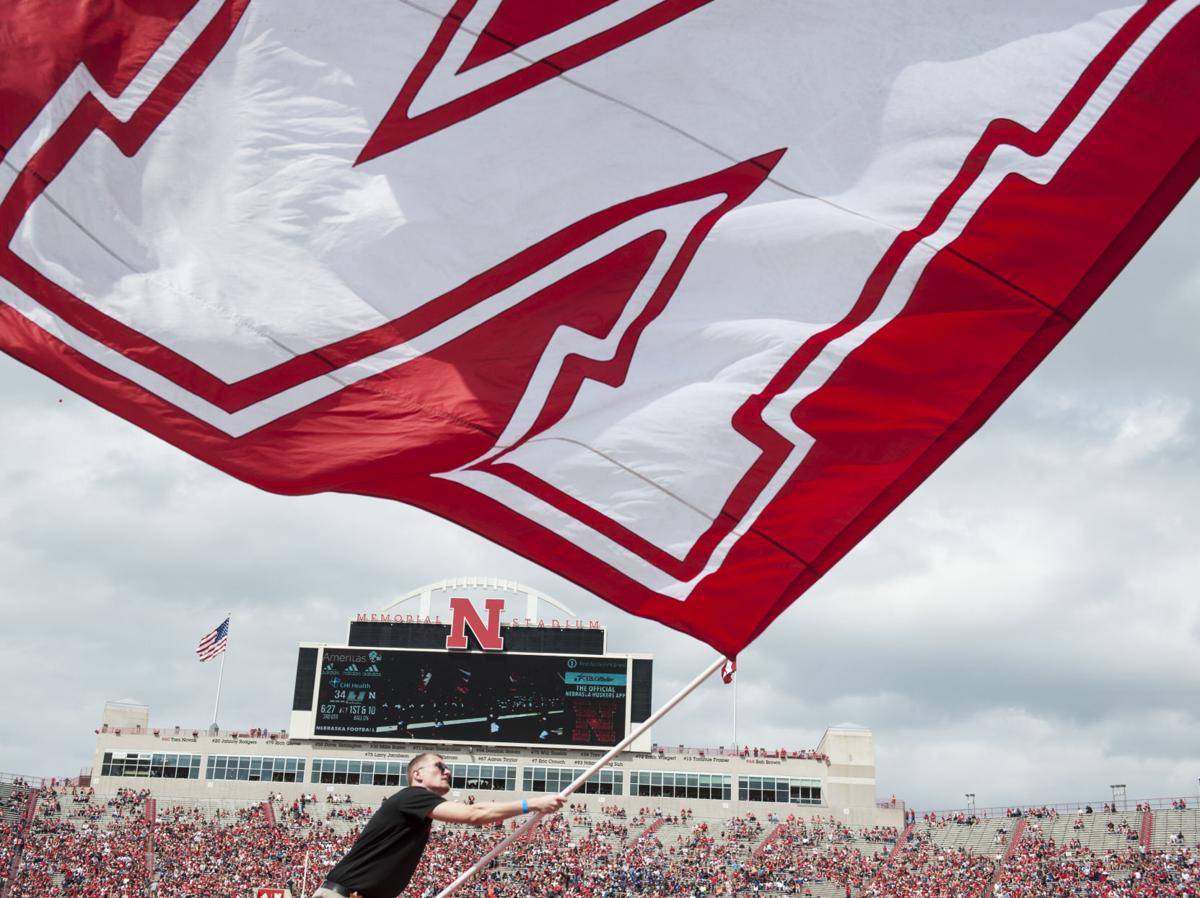 The Nebraska flag is waived following a touchdown during the 2017 Red-White Spring Game at Memorial Stadium. 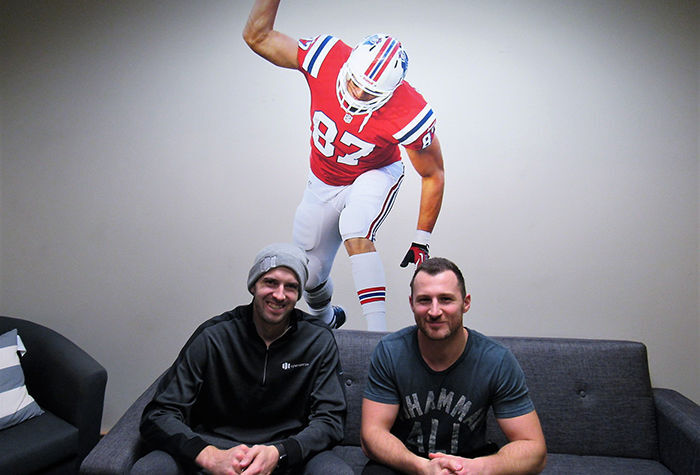 Opendorse founders Blake Lawrence (left) and Adi Kunalic sit in a company conference room that is dominated by a mural of former New England Patriots' tight end Rob Gronkowski, who is an Opendorse user.

Adi Kunalic would have loved to have the opportunity in his playing days that Nebraska's college athletes have in front of them now.

A former NU kicker, Kunalic is one of the founders of Opendorse, an athlete marketing platform, and the company's president. From his office just a long field goal away from the University of Nebraska's campus, Kunalic, Opendorse CEO, former NU linebacker Blake Lawrence and their employees are right in the middle of the new world of name, image and likeness opportunities that allowed college athletes to begin making money at midnight on Thursday.

Everyone has thoughts on what NIL might look like in the coming days, weeks and months. Kunalic does, too. But any money athletes make, Kunalic said, is significant. In his playing days, Kunalic said, a monthy scholarship was about $670. Today, that amount is double, if not more.

"But I would have loved back then to even get $20 to do a video shoutout. It would have meant so much to me to have an extra $20, $30, $50 a month from doing activities with people that really want to work with me," Kunalic said. "So I think that’s what I’m excited to see is some of the athletes — and not just football players, but across all the sports — who have an opportunity to monetize, it’s going to be exciting."

The following is a Q&A with Kunalic on the NIL landscape: What it looks like now, where it might go, and what opportunities may arise for the new generation of college athletes.

What are you hoping to learn over these first days, weeks and months about how this all will work?

AK: "It’s like the famous Mike Tyson quote — everyone has a plan until you get punched in the face. And so I think we can have all the experience and all the planning and everything that we have, but there’s always the unknown.

And this is such a new thing that is happening. A complete market is created overnight. I have to be honest: I’m excited to learn and see all the different things that are going to pop up.

But I think something that’s another key piece in this is, it doesn’t always need to be the brand, or the local sponsor. I think those are generally the entities that get the most buzz. It is also going to be your local business owner who is just like, ‘Man, I would really love to do something with all the Nebraska volleyball players. I want to be able to support them, and I’m going to think of a creative way to show up to something or whatever,' and that’s how they’re going to engage.

What kind of money might an athlete be in line to make?

I think there’s going to be some athletes that are going to make a lot, and those guys might end up having actual marketing reps and whatnot.

But I think that an average athlete in our estimates — and this is across the board, including the nonrevenue sports — we’re thinking around $2,000 a year.

So I think that’s a safe range. I think obviously some are going to go above that, and some athletes may not want to dabble with it as much.

But I think the coolest part is that all athletes will be able to do it. It’s not just one specific group or sport or niche. It’s everyone. And I think that’s what’s exciting about it."

This will be far more than social media opportunities, too, right?

AK: "Everybody I think tries to wrap it into social media, because social media is one of the easiest ways to do it.

But I think it’s going to include all types of activities. It could be that an athlete wants to host a camp. And they invite a bunch of folks to it, and they charge every camper that’s there a hundred bucks, and if you have 10, that’s a thousand bucks right there.

Or say they want to create their own T-shirts, or they want to do a speaking engagement. There’s going to be a number of activities that are going to come out of this.

How long will it take before all this feels like a normal part of college athletics?

AK: "As with anything, being on the business side of things, you always assume everyone is in the know. And that they’ve been kind of keeping up with everything that’s happening as it relates to NIL the last year, year and a half.

But I think that most athletes probably don’t fully comprehend or understand it.

Programs like Nebraska, for example, they’re in a really good spot. Because they were the first school to start up a NIL education program (Nebraska partnered with Opendorse in March of 2020). And they’ve been educating their athletes on what NIL means, how they should think about it, what it means to have a personal brand, how to really invest time into social media to become more appealing to people who want to work with them.

So the programs that have been doing that, they have a little bit of an upper hand just because their athletes have been at least pre-educated on the influence that NIL has and what it actually means.

Now, I think we’re going to realize as schools roll out their own NIL policies and how they administrate them — these are summer months, so it’s not like this is in the middle of the school year, and everybody’s on campus and you can go and easily talk to them.

I think the communication around what it means to athletes, and how to kind of corral everyone together and really inform them, I think that’s going to be a key part in this."

On eve of Name, Image and Likeness, Runza says it will offer Nebraska athletes endorsement deals

The Nebraska food chain is offering deals to the first 100 current athletes who opt in and promote the restaurant's rewards app on social media.

NCAA clears athletes for compensation as state laws kick in

The NCAA cleared the way for athletes to profit off their name, beginning Thursday.

While the NCAA fought against NIL ruling, many universities have taken a proactive approach, though the unknown is causing trepidation for universities at every level.

The NCAA took another step toward blanket protocols related to name, image and likeness.

Nebraska added walk-on kickoff specialist Brendan Franke to its program after he showed a powerful leg in a June workout.

Bryce Benhart just naturally gets noticed. And if he can put his size to consistent production, the Husker offensive lineman will stand out even more.

From Raising Cane's to sweet tea deals to 'Buddy Buckets' shirts, here's a look at some early notable NIL deals

The deals are coming fast and furious for college athletes looking to capitalize on the new name, image and likeness landscape.

For Shannan Lum, being recruiting coordinator for NU's men's program is more than a chance to be trailblazer

Shannan Lum seems to have fit in quickly as Nebraska's men's basketball  recruiting coordinator, the second woman to hold the title at a Power Five school.

Following NIL, Ernie Chambers says it's only a matter of time before universities pay athletes

Sen. Megan Hunt said her success passing the Fair Pay to Play Act happened in part because of a “rising coalition of voices.” That consensus doesn’t exist for universities to directly compensate players, she said.

The Nebraska flag is waived following a touchdown during the 2017 Red-White Spring Game at Memorial Stadium.

Opendorse founders Blake Lawrence (left) and Adi Kunalic sit in a company conference room that is dominated by a mural of former New England Patriots' tight end Rob Gronkowski, who is an Opendorse user.