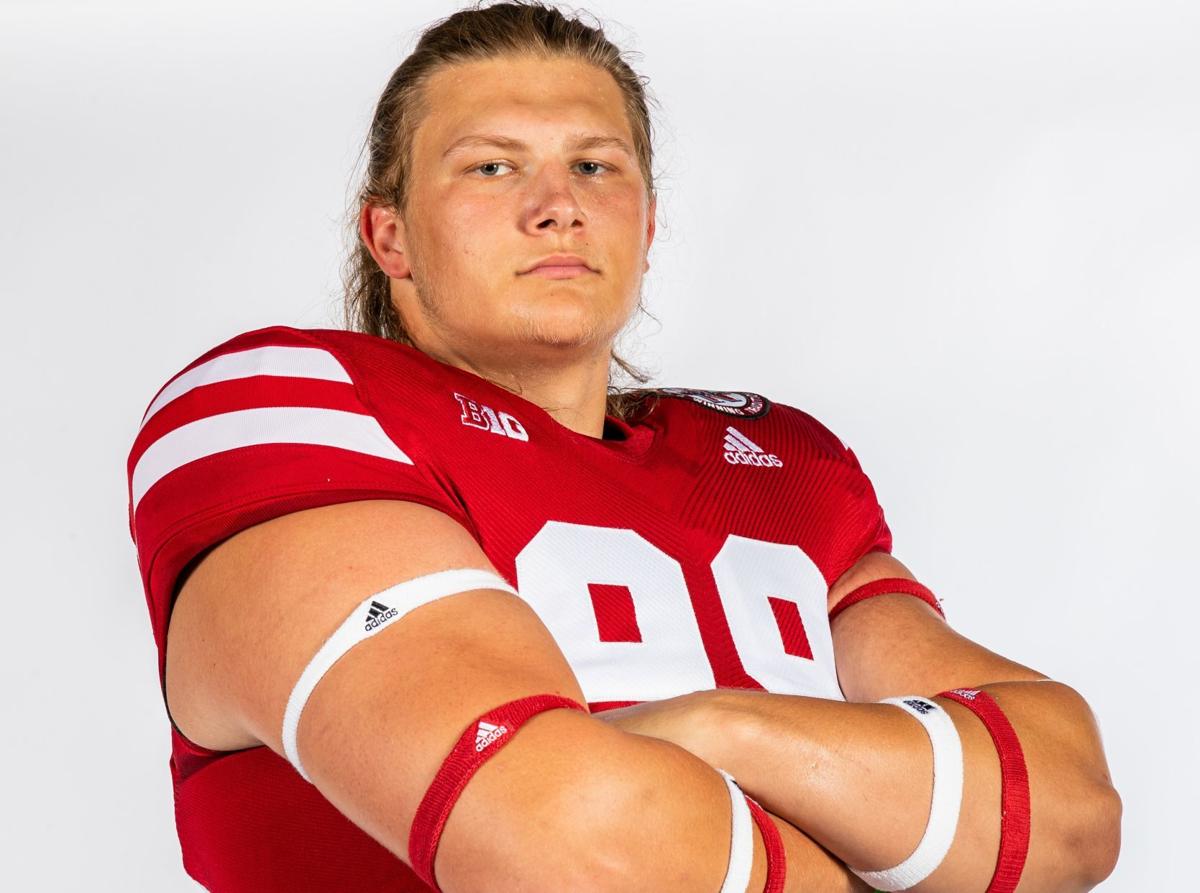 Ty Robinson is looking to build on his true freshman reps on the defensive line. 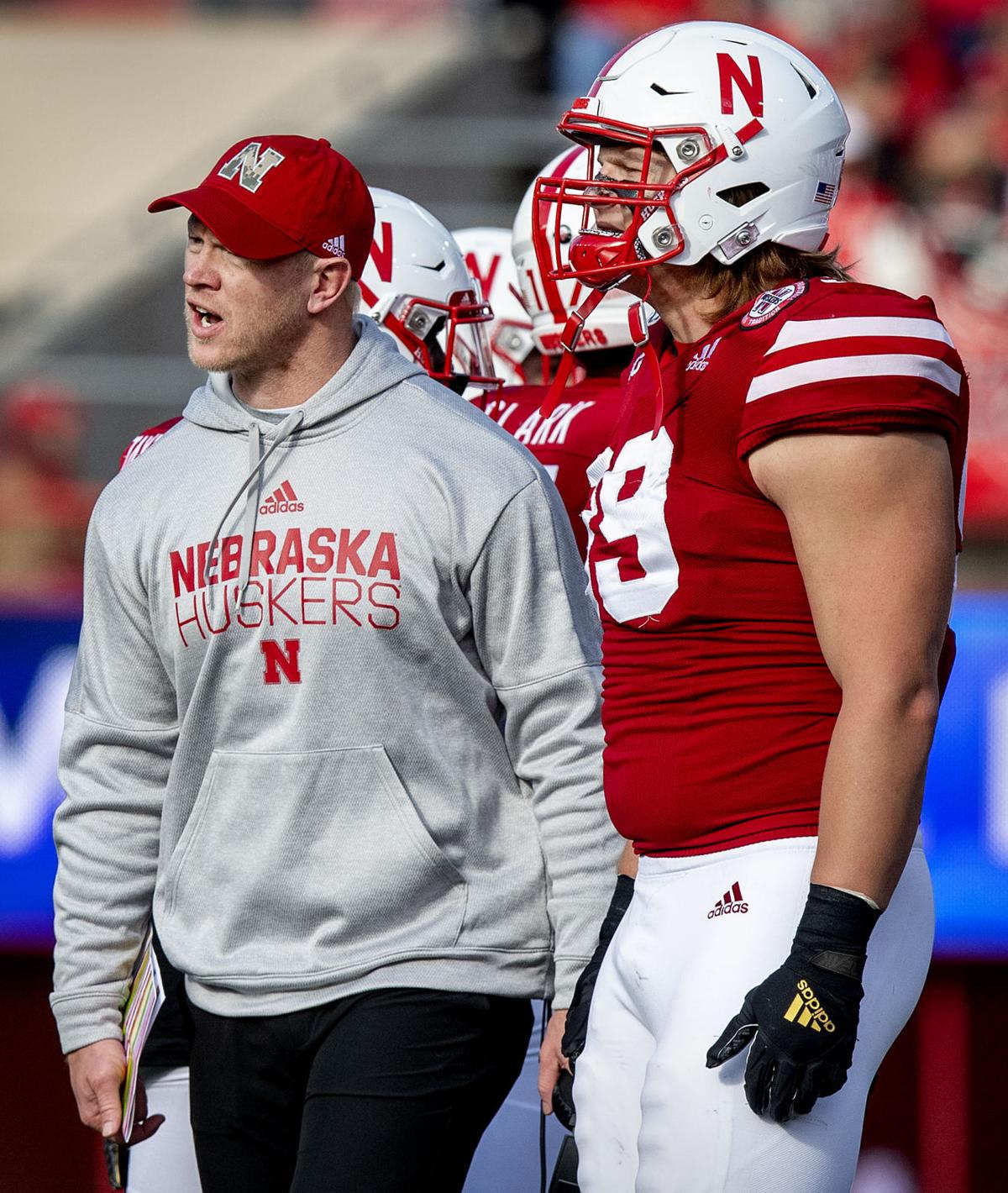 Ty Robinson knows a thing or two about baptism by fire on the football field.

The Nebraska redshirt freshman defensive lineman made his collegiate debut last year playing on the interior against Wisconsin’s Rimington Award-winning center Tyler Biadasz and one of the most prolific rushing attacks in the country.

You want a "Welcome To College Football" moment? That would certainly suffice.

Robinson, the Gilbert, Arizona, native and former four-star prospect, held his own against the Badgers and then appeared down the stretch for NU against Maryland and Iowa, too.

So when he takes the field on Oct. 24 against Ohio State, it won’t be completely new territory for him. However, Robinson is expected to fill a much bigger role for the Huskers this year, and in that way, he’s a good microcosm of Tony Tuioti’s entire front-line group. Most of the guys have played before, but not many beyond senior Ben Stille have been more than role players. All of them are going to be asked for much more in 2020, which begins against two of the best offensive fronts in the country in the Buckeyes and the Badgers.

“The thing I love about these young guys is that they don’t know any better. All they know is to be scrappy and play hard,” Tuioti said. “We know the challenge is out there. That’s why these young men come here to the University of Nebraska, because they know they’re going to play against some of the best offensive linemen in the country. There’s no better way to step up the challenge each and every week. …

“Our young guys are going to have to learn on the fly. It’s just like, you’ve just got to drop them at the deep end of the pool and they’ve got to swim.”

That conversation in many ways begins with Robinson. One guy doesn’t make a defensive line, of course, and the 6-foot-5, 325-pound Robinson will have plenty of rotation mates regardless of if he ends up playing mostly defensive end, mostly inside or a combination of both, as Tuioti says he’s capable of.

Robinson, though, is among the most promising young defensive linemen the Huskers have had in some time. In the past couple of weeks alone, he’s drawn rave reviews from several of his teammates.

“He’s playing nose and playing end and he’s just been bringing that dog with him every day,” junior nose tackle Damion Daniels said. “From the day he stepped on campus, you could just tell like, ‘This is a new dude.’ I just can’t wait to see him play.”

Echoed fellow junior Deontre Thomas, “The biggest difference I see is him just being a dog. He’s been out here throwing guys around, going with the No. 1s and just making a big improvement. I’m eager to see him play. He hasn’t got in a lot of games, but we’re ready to see him play.”

When he does take the field, he could be lined up across from either of a pair of projected first-round picks in Ohio State center Josh Myers or guard Wyatt Davis. Maybe it’ll be veteran left tackle Thayer Munford or former five-star recruit Nicholas Petit-Frere.

One thing is for sure: Robinson says he’ll be a much better player this year after getting his feet wet in 2019.

“It finally made me realize I wasn’t in high school anymore playing against these grown men,” he said. “And I also realized that I can’t really rely on my talent anymore. It’s a lot more technique and knowing what’s going on and what’s going to happen. It definitely helped me open my eyes to the big picture of what I need to do better at.”

Watch Now: The latest glimpse of a Nebraska football practice, from the turf at Memorial Stadium

Robinson gave credit to Stille, the most veteran player in the room, for taking him in and watching film with him all offseason, imparting little observations, thoughts about technique and planning and picking up on the subtleties of the game. He gave credit to the strength staff and fellow defensive linemen Damian Jackson and Chris Walker, who invited him to be their workout partner. He gave credit to Tuioti for pushing him even when he feels like he’s making progress.

“I feel like he always sees something that I can work on better,” Robinson said. “His quote is always 'good, better, best.’ So you might have a good play, but it could be better. I feel like that’s how it is with every play. You have a good play or great play, but you can always have a better play. That’s his coaching mentality towards us going forward.”

Tuioti likes what he sees so far.

“Ty’s made some tremendous strides, especially now that we’ve started camp and being in pads,” he said. “I’m really excited for him. … I’m expecting a lot out of him and he’s expecting a lot out of himself. He’s getting better and better every day. For him it’s just about live experience. He’s got the talent and the size, and for a big man he can move pretty well. When he gets into live game situations, he’s got to continue to grow and get use to that tempo and pace, because that’s hard to replicate in practice.”

That’s the case for Robinson, but also for most of his mates up front, too.

“It just kind of taught me that you’ve got to step up to the plate whether you’re ready or not,” he said. “You’ve just got to throw yourself in there. … I feel like I’ve progressed enough from last year to this year that I can at least do my part of the job, hopefully well, but I feel like I can produce for this team more than last year.”

Watch now: Tuioti drops several names that are 'ready to go' on DL

Watch now: Robinson says it 'helps' to work out with skilled trainer Duval

Nigel Bridger scored three touchdowns as Class A No. 5 Lincoln Southeast (7-0) rolled to a 49-16 win at Bellevue East on Friday night.

Dedrick Mills will get plenty of chances this season to run the ball as NU's "bell cow" back. He's probably kicking the stall in anticipation.

The teams will continue a growing tradition of playing Black Friday, which serves as Nebraska's lone Friday game this season.

'It finally paid off': Norris 2021 TE James Carnie's recruitment took off and now it's done. He's a Husker

You may have noticed Nebraska's 2021 class now has three tight ends within an hour's drive of Memorial Stadium — and more takeaways.

About one month after connecting on a 58-yard field goal, Kelen Meyer picked up a walk-on offer. It didn't take long for him to accept.

The assertion is the latest indicator that Luke McCaffrey is making a hard charge at challenging Adrian Martinez.

Ty Robinson is looking to build on his true freshman reps on the defensive line.