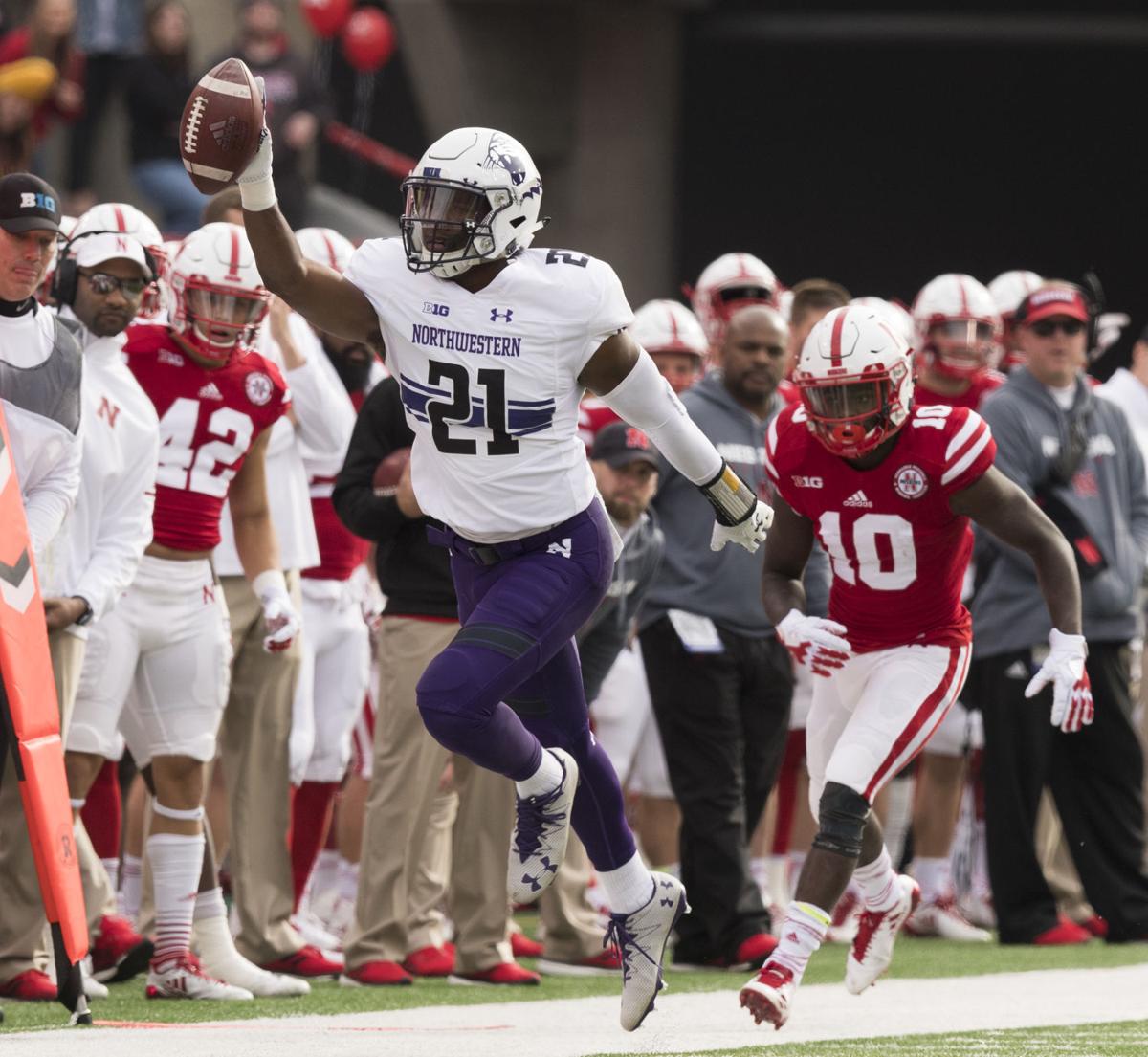 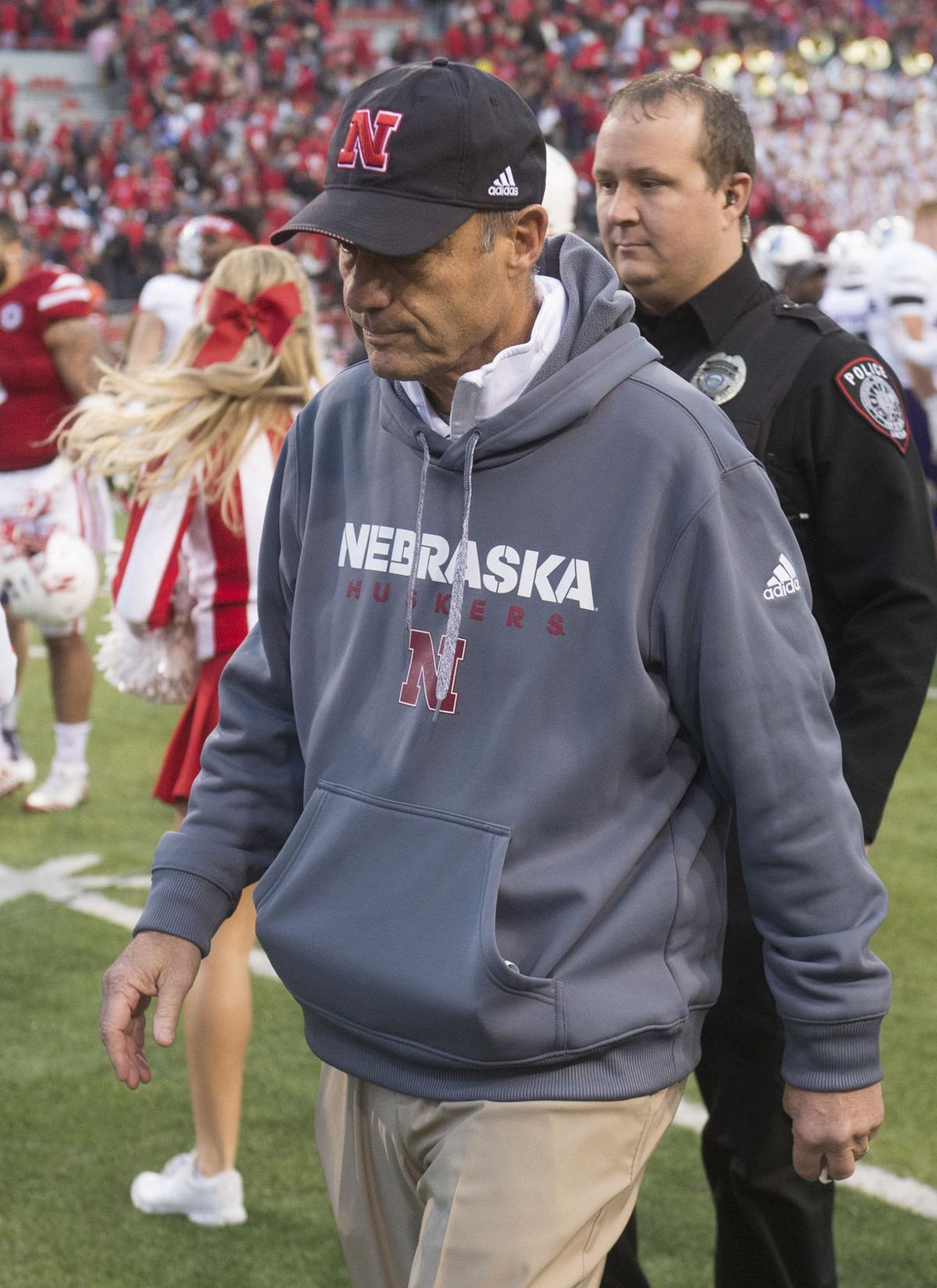 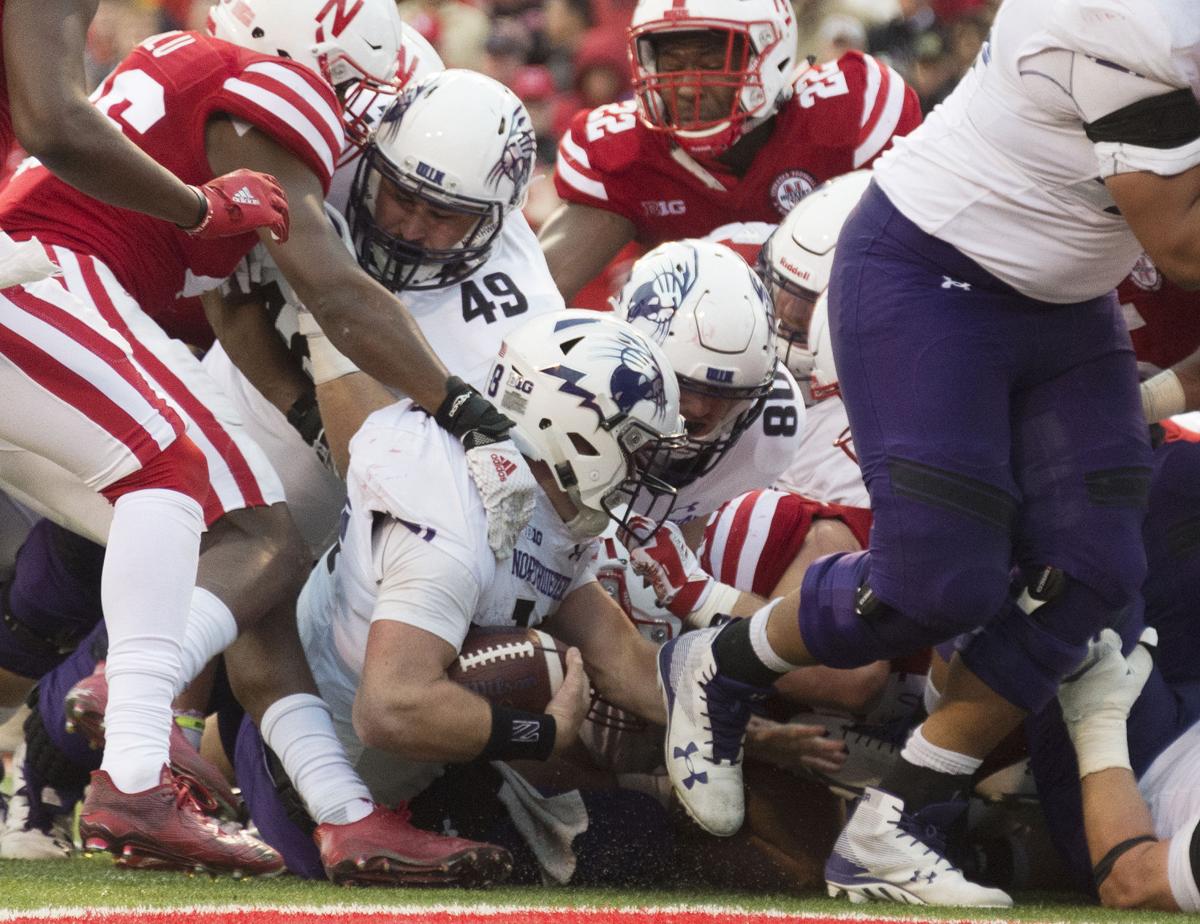 Northwestern quarterback Clayton Thorson (18) scores in overtime to give the Wildcats a 31-24 victory over Nebraska on Saturday at Memorial Stadium.

As the Memorial Stadium game clock wound into the final 11 minutes Saturday, Nebraska looked poised to finally wrestle control of an evenly matched game from Northwestern.

Junior quarterback Tanner Lee hit JD Spielman for 23 yards from his own 43 and a Wildcats personal foul moved the ball all the way to the 19. The Huskers have struggled in the red zone recently, but the hosts were already leading by seven points and now had a chance at a kill shot.

On the sideline, Husker coach Mike Riley ran the game situation through his head and reminded his side, “a field goal makes it a two-score game.”

Nebraska, which has too often settled for three instead of getting seven in the red zone, now certainly wishes it had the chance to send Drew Brown on the field one more time.

Instead, Lee dropped back to pass on first-and-10 and, despite seven protectors, was leveled by Joe Gazino, who ran a stunt and came free up the middle. The ball, intended for redshirt freshman JD Spielman, who all involved said was open, instead fell well short and into the arms of Wildcats’ standout safety Godwin Igwebuike.

Lee’s third interception of the afternoon wasn’t the end for the Huskers — Northwestern still had to drive 84 yards and tie the game with 5:32 left; still had to halt Nebraska’s bid for a winning score at the plus-40; still had to score on its first overtime possession and quickly snuff out the Huskers’ chance — but the end, by a 31-24 count, came bitterly for a team that’s failed to capitalize all too often this fall.

“That’s the deflating, disappointing part,” Riley lamented after his team fell to 4-5 overall on the season, 3-3 in the Big Ten and further away from relevancy both in its own division and in the hunt for bowl eligibility. “We had our chances to take a lead that would have made them get two scores in the fourth quarter and we didn’t do it.”

In fact, the Huskers had three golden opportunities to finally put a team to the Memorial Stadium turf — NU is 2-4 here this season — and keep it there.

Instead, they head into the final three weeks of the regular season with a deepening pool of questions about what went wrong rather than a growing set of solutions.

“I absolutely think you need to do what we did last week (several times) over time (in order to) to have an identity about being able to do that and respond,” Riley said, referring to a game-winning drive against Purdue. “I would have to just say that we’re not yet there.”

Nebraska seemed like it might break through in that department on its first offensive possession of the second half.

The Huskers had already turned a three-point halftime deficit into a 21-17 lead thanks to senior outside linebacker Marcus Newby’s 49-yard interception return for a touchdown in the opening minute of the third quarter.

Then the Blackshirts forced a punt and Nebraska took over at its own 15. They put together an 18-play march that chewed up 9:24. When Devine Ozigbo rushed for 5 yards and then 1, the Huskers had a first-and-10 at the Wildcat 11 and a chance to go up 28-17.

Instead, the hosts managed just 5 yards on their next three plays and settled for a 23-yard Brown chip shot. The crowd cheered and the home sideline clapped, but the head coach sensed then that his team might be in trouble.

“That frankly did worry me, when we didn’t score a touchdown right there,” Riley said. “I thought that would’ve been the perfect drive to try to capitalize on for a touchdown. Seven points instead of three, that was disappointing.”

Said Lee, “One of the big things this week was to make sure we finished in the end zone, and so that was disappointing, you know to go on a big drive like that and not be able to punch it in. So, have got to be better there. It takes a lot of pressure off of our defense, who played well enough to win tonight.”

Nebraska started at its own 7 with 5:24 remaining and moved to Northwestern’s 40, but Lee and the offense found no last-second magic this week. Instead, the drive stalled and, heading into a slight wind, the Huskers punted instead of asking Brown to try to hit from 57 yards with 45 seconds remaining.

Thorson's heave from the Huskers’ 42 as the fourth quarter expired was knocked down.

Overtime, however, was not nearly as even as regulation.

Wildcats running back Jeremy Larkin picked up 12 yards and then 6 before backfield mate Justin Jackson churned for 5 more, quickly moving the visitors to the 2-yard line. Northwestern found success on the ground throughout, rolling up 232 yards on 45 attempts en route to a balanced, 475-yard afternoon.

It did take four tries and coach Pat Fitzgerald leaving his offense on the field needing a couple of inches on fourth down, but Thorson eventually plunged into the end zone to give Northwestern the lead.

Nebraska did not take long to fold. Lee fired incomplete on first down and was sacked on a second-down screen attempt for a 10-yard loss. He hit senior tight end Tyler Hoppes for 8 on third-and-20, but had a fourth-down throw for De'Mornay Pierson-El batted down.

So, too, are the Huskers’ season hopes largely swatted.

Lee hadn’t turned the ball over since a first-quarter interception against Wisconsin was returned for a touchdown on Oct. 7, but reverted to early-season form with three interceptions.

“I still love this team. Tough situations keep coming up, but I think we are all going to be better for it and because of it.”

Wildcats cornerback Kyle Queiro picked him off twice in the first half, but the Wildcats failed to turn either into points.

Husker senior safety Joshua Kalu made sure Queiro’s first interception was for naught, picking off Thorson four plays later. The senior quarterback appeared to think he had Kalu one-on-one against his slot receiver on a deep crossing route, but Newby dropped into help coverage and threw off the timing of the play. Thorson’s throw was right at Kalu inside the 10, and the Houston native returned his seventh career pick 32 yards to the 39.

The Huskers drove 61 yards in 10 plays from there, including a 16-yard burst from Devine Ozigbo to start the march. Lee threw the first of his two first-half touchdowns to reserve wide receiver and Lincoln East graduate Bryan Reimers on a 22-yard connection.

The Huskers pulled even again in the second quarter on Jack Stoll’s first career touchdown. The redshirt freshman tight end hauled in a 32-yard on-the-run throw from Lee on a play-action bootleg. That capped a two-play drive that began with a 40-yard JD Spielman jet sweep.

Lee’s second pick came in the final minute of the first half as the Huskers tried to respond to Charlie Kuhbander’s field goal late in the second quarter. The Destrehan, Louisiana, native hit Morgan for 11 yards to open the drive and advance NU to the 46. Lee’s next throw, though, was a bad one on a deep out for Pierson-El that was straight at Queiro, who returned it to the 35. The Wildcats gained just 8 yards on four plays, though, and Kuhbander missed a 45-yard try, forcing Northwestern to settle for a 17-14 halftime lead.

While the Wildcats failed to capitalize in the first half, it was the Huskers who wilted down the stretch.

“We’re obviously disappointed in our finish,” Riley said. “It felt like there had been some good football, and then it kind of felt deflated, right into the overtime.”

The Wildcats eked out a 31-24 overtime win over the Huskers on Saturday at Memorial Stadium. Photos by the Journal Star photo staff.

Tanner Lee used the same word again and again after Nebraska's loss to Northwestern, so much so he even called himself on it.

Despite run-stopping struggles, loss to Cats came down to inches for Diaco, Blackshirts

About 4 inches separated the ball from the goal line. You could maybe argue 3.

In the minutes after Nebraska’s 31-24 overtime loss to Northwestern, the Huskers’ postgame interview area felt more like a morgue than a weight room.

At this point of the season, with Nebraska at 4-5 overall and 3-3 in the Big Ten, it all feels pretty awful if you bleed Husker red and hunger for sure signs of progress.

It'll be the Bob Diaco Show this week in Lincoln. Grab some popcorn.

Northwestern quarterback Clayton Thorson (18) scores in overtime to give the Wildcats a 31-24 victory over Nebraska on Saturday at Memorial Stadium.