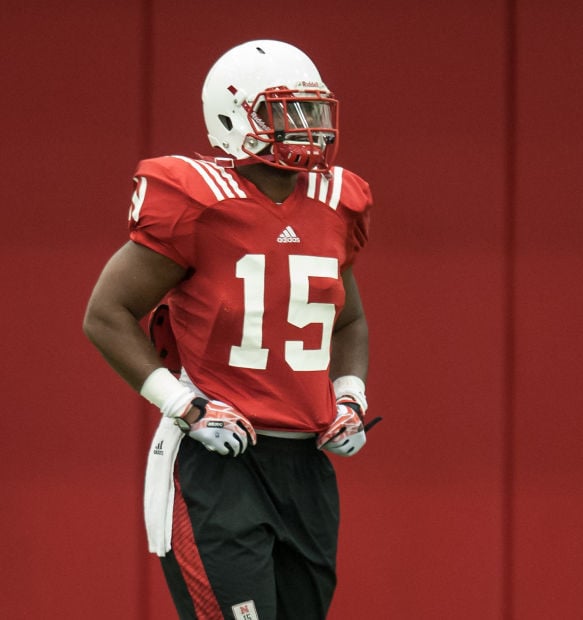 Michael Rose-Ivey is one of Nebraska's leaders at linebacker. 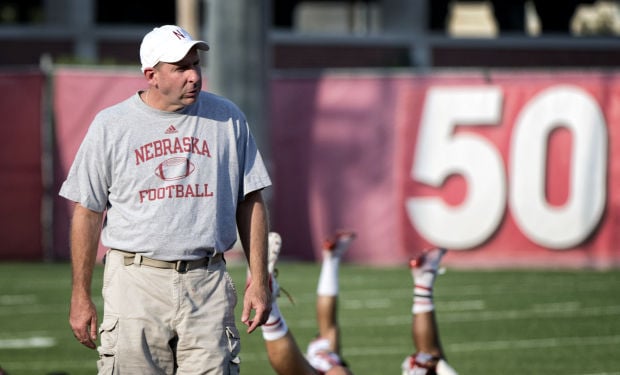 Head coach Bo Pelini at Nebraska's first practice of fall camp at Hawks Championship Center on Monday, Aug. 4, 2014. Pelini says the dynamic between players and coaches has changed since he took the job at Nebraska seven years ago.

Considered key figures in Nebraska's 2014 quest just a few days ago, Michael Rose-Ivey and Charles Jackson are now just spectators like the rest of us. At one point during the practice, they stood arm in arm, two good legs between them, brothers setting off on the same rehab mission.

Combined with Friday's announcement of a season-long suspension to safety LeRoy Alexander, three key puzzle pieces are off the table one week into fall camp. If you add Avery Moss to the discussion, there's four missing parts that, just eight months ago, many could have pegged as starters come Aug. 30.

But the show doesn't pause for sympathy, and with the season opener against Florida Atlantic just three weeks away, Husker head coach Bo Pelini wasn't about to engage in a mopey narrative about the week that was.

Saturday's practice produced its own rough hits, with quarterback Tommy Armstrong leaving early after an awkward collision with safety Corey Cooper. If seeming woozy at first, Armstrong didn't show signs of injury anywhere else as he left the field. Pelini expects him to be fine.

The status of redshirt freshman running back Adam Taylor, who appeared to suffer an ankle/foot injury, wasn't quite as clear immediately after practice.

The losses of Rose-Ivey and Alexander, though, were the lead topics in the post-practice interview session. Rose-Ivey's injury was suffered Friday night, and according to Pelini, it came without contact.

The sophomore linebacker said on his Instagram account that he tore his ACL, and possibly his MCL, too.

"I feel for Michael," Pelini said. "Obviously it's a bad break for him."

With the injury, sophomore Josh Banderas, who was neck-and-neck with Rose-Ivey, now becomes the clear-cut favorite at MIKE linebacker. Getting the reps behind him right now is senior Trevor Roach, who moved back to the middle after working at BUCK.

"He's played a lot of football for us," Pelini said of Roach. "He's a good football player."

At safety, meanwhile, Cooper and Nate Gerry are getting most reps with the top unit. But just as important is the development of the guys behind them on the second line — D.J. Singleton and true freshmen Kieron Williams and Luke Gifford.

Williams, a late addition to the last Husker recruiting class in May, has had some eye-catching moments the first week, though obviously the grind is just beginning for him.

"I think Kieron is aggressive, he has good instincts," Pelini said. "He's got a long way to go as far as his understanding of everything. The more we install … it's all kind of running together for him, but that's to be expected right now. But he's showing a lot of good things early on."

If the last week suggested anything, it was that some younger players might need to grow into bigger roles than perhaps initially expected. And, yeah, a couple of weeks without any key injuries would sure be nice, too.

Two-a-days begin Monday, but first, a day off. Time to take a deep breath.

Few jobs are locked up this early in fall camp, and that seems especially true on the right side of Nebraska's offensive line, where Husker co…

Nebraska fans should try not to overreact to Husker defense's personnel setbacks this past week, Steven M. Sipple writes.

DB Charles Jackson out for the season

The Huskers suffer their first big blow of the fall. Charles Jackson is out for the season.

Michael Rose-Ivey is one of Nebraska's leaders at linebacker.

Head coach Bo Pelini at Nebraska's first practice of fall camp at Hawks Championship Center on Monday, Aug. 4, 2014. Pelini says the dynamic between players and coaches has changed since he took the job at Nebraska seven years ago.