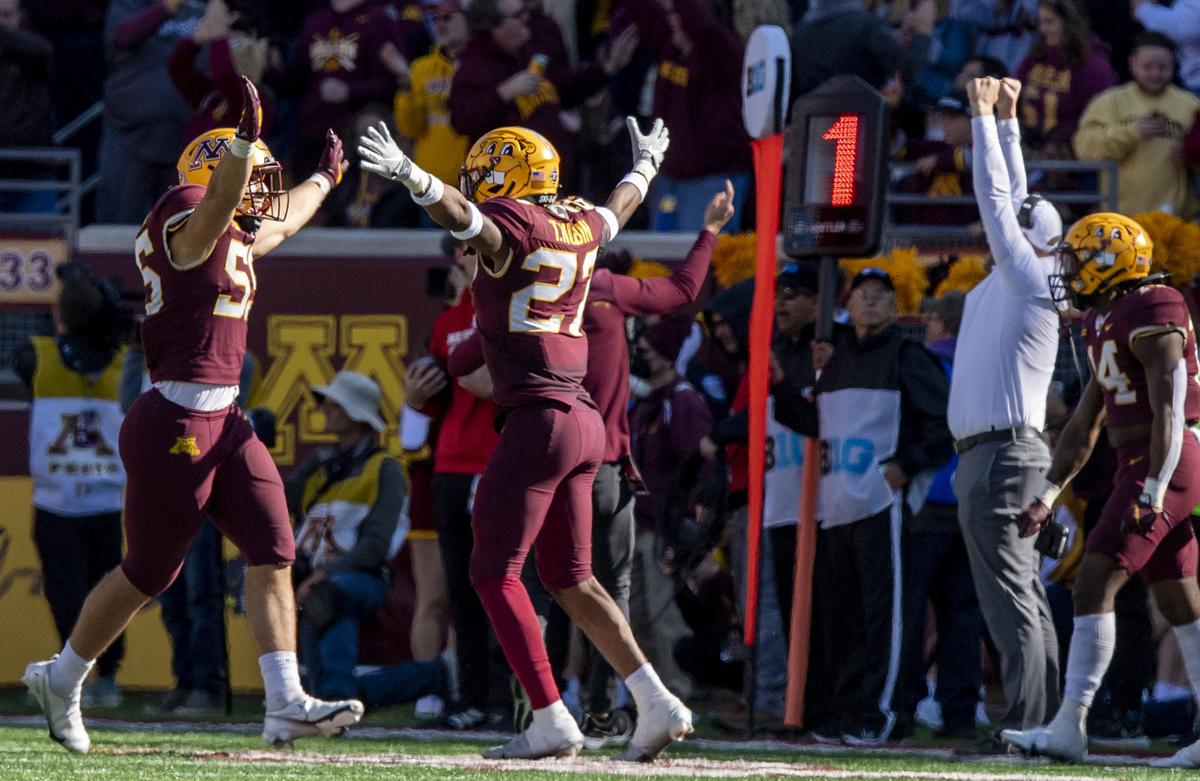 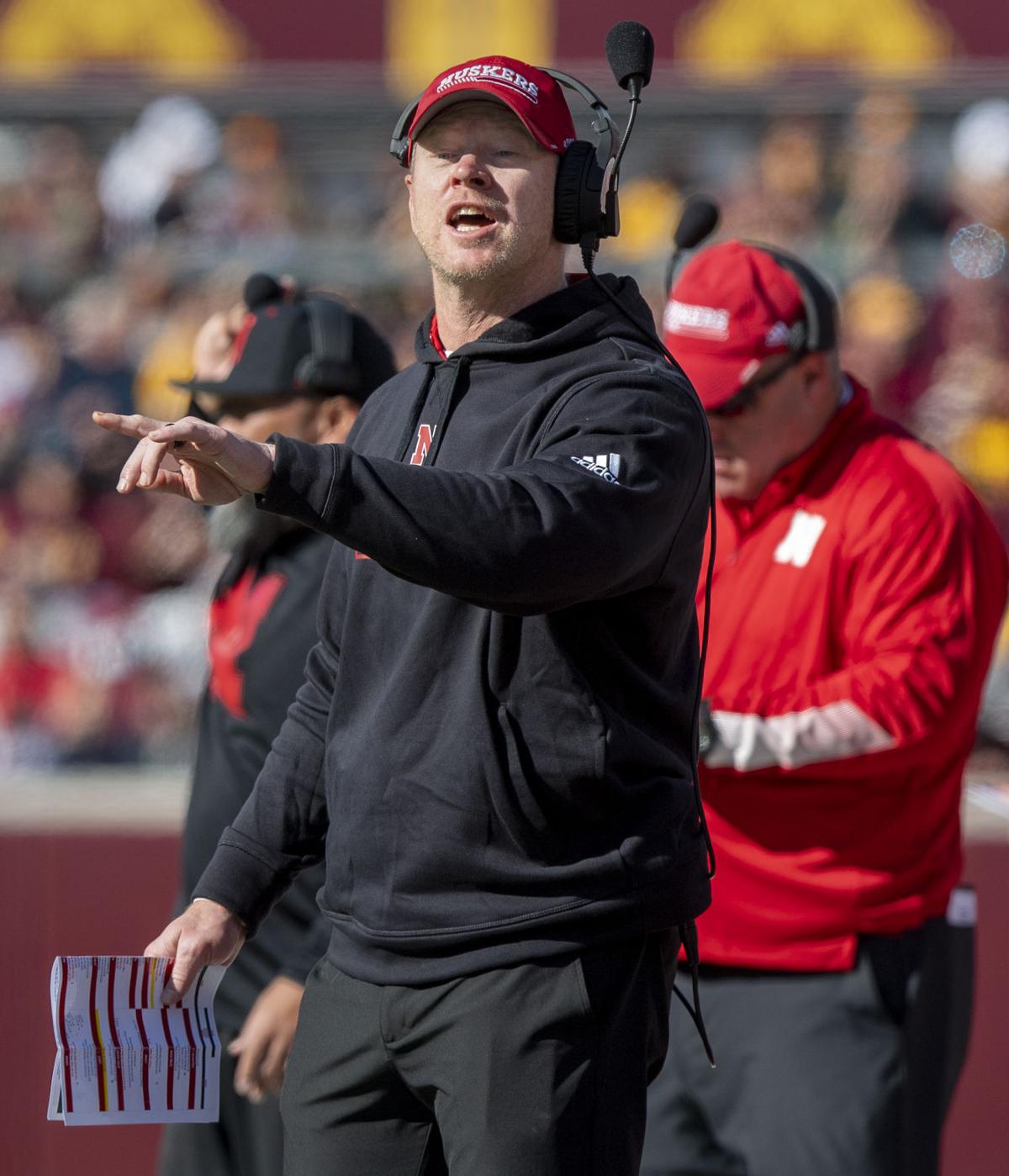 Nebraska coach Scott Frost directs the team against Minnesota during the first half Oct. 16 at Huntington Bank Stadium in Minneapolis.

MINNEAPOLIS — All the way back in the dog days of July, when the heat shimmered off the Indianapolis blacktop and the promise of Year 4 glimmered out in the distance ahead of Scott Frost and his Nebraska football team, the head coach stressed the importance of a fast start.

He knew it. His team knew it. Wind under the wings. Momentum. The chance to build a sense of progress and accomplishment. Any amount of lift mattered for a program weighed down by a razor-thin margin for error, a habit of finding ways to lose and the growing weight of impatience, yet buoyed by more reasons to believe than in any of the previous three seasons. Nobody backed down from the idea that Aug. 28 at Illinois would set the course for Frost’s 2021 team.

Fast forward to the middle of October, and Frost on Monday stood at a podium in Lincoln and again stressed the importance of a fast start, this time against Minnesota. You hit the jets early and you’re in great shape. You’re airborne and cruising above the turbulence.

You don’t? P.J. Fleck’s Gophers will drag you into the dirty air and bounce you around until you crack.

The Huskers inexplicably, incomprehensibly showed up without energy on Aug. 28 against a hapless Illinois team and found themselves playing catch-up, not just for the rest of that opening loss but for the entirety of the season to date.

The Huskers inexplicably, incomprehensibly showed up without energy again Saturday — for the first time, actually, since August. They found themselves once again playing from behind.

“We’ve got to, as a staff, get them a little more juiced up to play,” Frost said Saturday. “I didn’t think we had quite the same energy, and that’s on us. …

One of the great reporters of all time, the late, decorated foreign correspondent Anthony Shadid, once said that sometimes the most powerful way to tell a big story is with a small story.

“Little details got us beat,” Frost said. “I know the guys are kind of tired of hearing that. I’m tired of saying that. But that’s what it is.”

Even after the listless start Saturday, though, the Huskers got themselves back in the fight.

In fact, the offense and defense combined to tilt the field so heavily in Nebraska’s favor in the second half on Saturday against the reeling Gophers that it felt like only a matter of time before the game swung.

Four times the offense took the field with the opportunity to take the lead in the second half, twice thanks to interceptions and twice thanks to the first two three-and-outs of the afternoon for the Blackshirts.

Instead, those four drives resulted in two turnovers on downs, a missed 27-yard field goal and a safety. Zero points. In fact, they somehow trailed by seven instead of five after a stretch of dominating play.

After Nebraska’s 0-1 start to the season, too, it got off the mat. Took care of the next two games and went to Oklahoma fixing for an upset. It looked for a while like they might do it, or at least that they’d get Michigan State the next week when they took control in the fourth quarter. Or maybe the next week against Michigan. Surely then.

All along, it felt like only a matter of time. Inevitable. “It’s going to happen,” Frost has said more than once.

Five losses. All by one possession. Dealer’s choice on which one leaves the bitterest taste, but you could make an argument for any of them.

Each passing week at this point is like another second-half drive gone begging. Each narrow loss the season’s equivalent of tripping on a fourth-down carry from maybe 6 inches outside the end zone.

Way back when Frost was standing at that lectern in Indianapolis, if you’d imagined how Stille would be sizing up his team eight games deep and headed into a bye week, you could have dreamed up any number of different scenarios. You might have even dreamed up 3-5 if you’re the pessimistic sort.

But five losses like this? Each has been a whopper in its own right and they stack on top of each other to form a reality that is either confounding or infuriating depending on the perch from which you observe the program and is exhausting for all involved.

In that way, maybe the bye week comes at a decent time for Nebraska.

Ultimately, distance in college football doesn’t get measured by fourth-down inches (or a replay review of whether Adrian Martinez crossed the goal line one play earlier), but rather on the scoreboard and in the standings. Nebraska’s 1-4 in the Big Ten.

On the other side of the bye week, home games against Purdue and Ohio State, another off week, a trip to Wisconsin and a home date with Iowa await. The Huskers have to win three out of four to ensure they qualify for a bowl game.

To borrow a Frost phrase, we’ve seen this movie before. Saw a Saturday matinee in Minneapolis, actually. Nebraska didn’t get its work done early and now it’s playing from behind. Chance after chance gone by the wayside and, sure, the clock’s not at zero, but it’s bleeding steadier than a 7:42 Gopher touchdown drive.

What did we learn Saturday? Well, it’s safe bet that Nebraska’s got punches left to throw. Frost reiterated Saturday that he knows his team won’t quit.

He’s probably right. It’s not only an admirable trait, but it’s also probably the best thing that can be said about the 2021 Cornhuskers.

Any guesses on how it will turn out?

Parker Gabriel and Chris Basnett break down Huskers-Gophers, and field your questions

It's a crystal clear, brisk October morning in Minneapolis. One pregame note is the offensive line, which is a little bit shorter on depth than usual.

Here are four areas that factored into Nebraska's loss at Minnesota on Saturday.

Lisa Falck sported her red No. 88 jersey, and wore her emotions on her sleeve — "Oh my gosh, I've got tears in my eyes."

MINNEAPOLIS — Connor Culp’s voice wavered and his responses came slowly as he reconciled another set of tribulations.

The closer Nebraska's offense gets to pay dirt this season, the more it sputters and spins its wheels in the mud outside of it.

A look at some talking points after the Huskers' game against Minnesota on Saturday.

Yes, Nebraska will have plenty of time to recover physically after playing eight straight weeks to open the season. But there’s also work to do.

Scott Frost hit a few key talking points on his weekly television show, including the health of Deontai Williams and Adrian Martinez.

Nebraska will come off its bye and host a division foe in the afternoon.

Nebraska's 2022 recruiting class is already small and it got smaller on Tuesday evening.

Iowa stumbled. So who is the new No. 1 in Parker Gabriel's Big Ten power rankings?

The Hawkeyes fell from No. 2 to No. 11 in the AP poll. Where do they slide in our weekly power rankings, and who takes over the top spot?

After career-best game, Austin Allen trending toward one of best TE seasons in recent Husker history (and maybe ever)

The Aurora native said he hoped the "flood gates are open now" after a big game against Michigan. He followed that up with a career-best outing.

Nebraska coach Scott Frost directs the team against Minnesota during the first half Oct. 16 at Huntington Bank Stadium in Minneapolis.