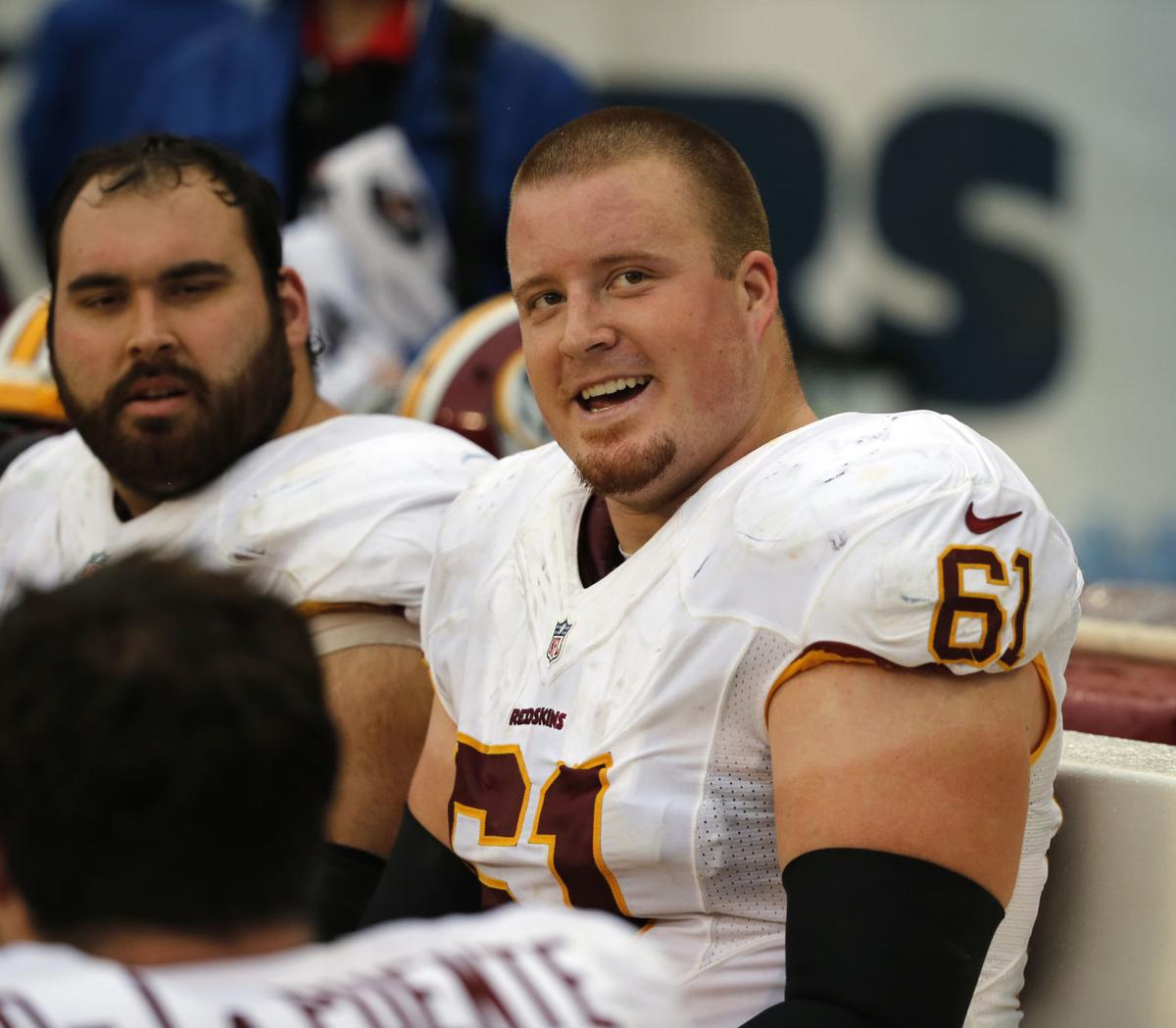 Washington's Spencer Long watches from the bench during the second half of a game last season against the Bears in Chicago. 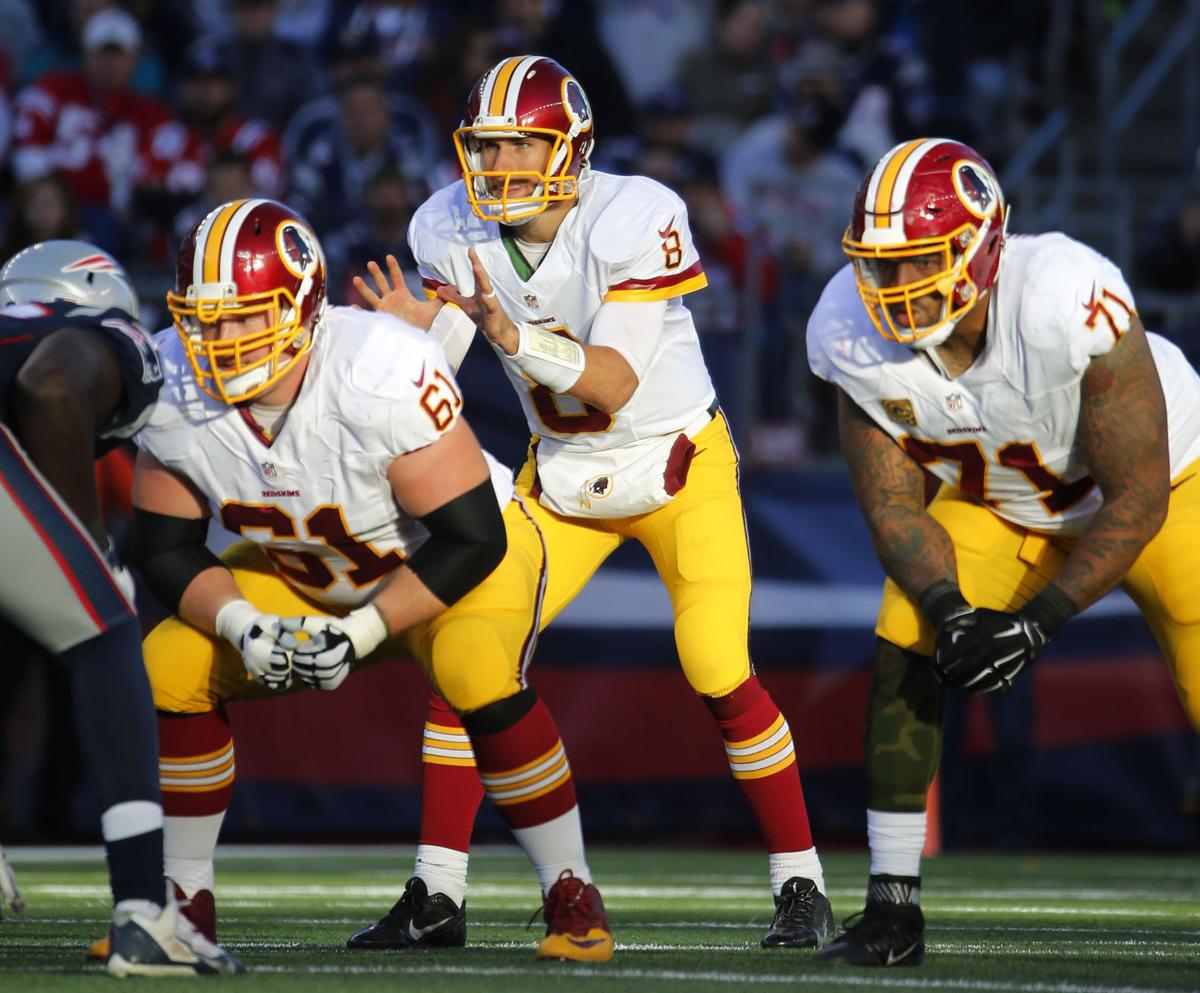 Washington quarterback Kirk Cousins waits for the snap with guard Spencer Long (61) and tackle Trent Williams (71) during a game last season against New England. Long, a former Husker, is spending his summer in Lincoln working out with other former NU offensive linemen.

It seemed a most pleasing sight for Billy Devaney. As a collection of NFL wide receivers and running backs, including former Huskers Ameer Abdullah and Kenny Bell, made a slow trek down the sidewalk toward another day of work with Nebraska wide receivers coach Keith Williams, four very large men were already on the field in sweat-stained shirts.

There was Spencer Long, earning a paycheck in the NFL with Washington, and Jeremiah Sirles, doing the same with the Minnesota Vikings, along with fellow former NU offensive linemen Marcel Jones and Givens Price.

Devaney, Nebraska's executive director of player personnel who spent many of his professional years in NFL offices, looked on knowing this sure can't hurt.

Former Huskers, including those who take up roster space at the next level, coming back to their alma mater to work out in the summer months is definitely a good look, especially to those current Huskers with ambitions of playing pro ball themselves.

This is not a new routine for Long, who went from a walk-on who didn’t play a snap his first two years to an all-conference player and third-round pick in the 2014 NFL Draft. He comes back every summer to work out.

"All I know is that when I was here and I would see some NFL guys come and train, it vouched for the program and pumped me up to be part of something that would extend beyond just Nebraska football,” Long said.

"It was important to see the loyalty from players that used to play here to come back and use the facilities, and how they would treat players that don’t play anymore. They don’t just shut them off, they invite them back in and treat them like family. And that’s a big deal for guys that are playing currently or going to play for Nebraska."

Long is often joined in workouts by Sirles, Jones, Price and Brent Qvale of the New York Jets. Matt Slauson, who just agreed to a deal with San Diego, also used to come back when he was with the Chicago Bears.

Sure, part of the benefit is having top-level facilities to make sure your body is right before training camp. It’s also about being pushed.

Long and his buddies continue to drive each other just like they did back in their Husker days.

"It’s everything,” Long said. “If I were to come back here and work out by myself, it’d be hell. It’s never as fun when you’re doing that. You don’t get as much work and you don’t push yourself as hard.”

As Williams said, great programs in their best eras have had NFL players returning to campus every summer to grind.

Their returns remind the college players that success isn’t just gained by reputation or anything like that. You have to keep working.

Long knows all about that.

When he first got to the NFL, he said it was impressive how fast the game moves. He’s been adjusting to it and now hopes to make a big move this season.

"Obviously, the main goal is to get a starting job and then go from there,” Long said. “Obviously, Pro Bowl would be nice, but I’ve got a ways to go. It’s steppingstones. I got to get up to the first one, make a starting lineup, earn a living, make the 53 (man roster). Little things first. The big stuff will come later, hopefully.”

Whatever happens next, Long’s is a good story to have hanging around Nebraska’s campus this summer.

Abdullah, his former Husker teammate, brought up Long unsolicited last week as someone who is the ultimate testament about what hard work can bring.

"I just saw the countless hours he put in day in, day out, trying to be the best player he could be for Nebraska," said Abdullah, who has also made Lincoln a training spot this summer. "I know he never thought he was going to be a starting left guard in the NFL. When I come back and see him, I always look at him and smile.”

Long doesn’t mind reflecting on the journey he had to get to this point. He was a Husker scout-teamer for two years, and wasn’t even originally an offensive lineman.

Then he started every game at Nebraska for 2½ seasons before suffering an injury. You don't want to get stuck looking in the past, but those memories can also serve as their own sort of fuel, too.

It’s all about having the right balance. Working out with old friends on that field where you grew as a player is another form of motivation.

You remember it took a lot to get to where you are now, and it’s going to take even more going ahead.

"It's just good," Long said. "I get to play football for a living, so how can I complain?"

The bar has been set somewhere close to those clouds and Nebraska's wide receivers haven't been shy themselves in helping place it there.

NFL receivers gather in Lincoln to train under Williams

Take it back a decade. This was when Kelly Mosier was attending the University of Nebraska-Lincoln and it seemed like every week there was a h…

Former Husker Maher getting his kicks in the CFL

From his high school days as a Kearney Bearcat to the Hamilton Tiger-Cats of the Canadian Football League, Brett Maher’s life as a kicker has …

Washington's Spencer Long watches from the bench during the second half of a game last season against the Bears in Chicago.

Washington quarterback Kirk Cousins waits for the snap with guard Spencer Long (61) and tackle Trent Williams (71) during a game last season against New England. Long, a former Husker, is spending his summer in Lincoln working out with other former NU offensive linemen.