The 6-foot-9, 255-pound Allen on Wednesday was named first-team all-Big Ten by the league's media.

He also was named the conference's tight end of the year.

He becomes the first Nebraska tight end to earn first-team all-conference honors since 2003, when Matt Herian of Pierce earned the honor.

A native of Aurora, Allen finished this season with school tight end records for receptions (38) and receiving yards (602).

He finished the season on a personal strong note, with receptions of 27 and 28 yards during Friday's 28-21 loss to Iowa. Nebraska ended the season with a 3-9 record, including 1-8 in the Big Ten.

Allen wound up the season with 12 receptions of longer than 20 yards. What's more, he became only the fourth Nebraska tight end to record multiple 100-yard receiving games in a season (doing so against Minnesota and Wisconsin), and the first since Tracey Wistrom in 1999.

Allen graduated in May of 2021 with a degree in mechanized systems management. As of last week, he was ranked as the No. 5 tight end nationally by Pro Football Focus. Although he just completed his fifth season in Nebraska's program, he had one season of eligibility remaining because of the COVID-19 eligibility freeze in collegiate athletics. But he opted last week to turn pro.

In addition to Allen's honor, Nebraska sophomore center Cameron Jurgens was named third-team all-Big Ten by the coaches. The Beatrice native spent his true freshman season at tight end before switching to center in the spring of 2019.

Running back of the year: Kenneth Walker, Michigan State. 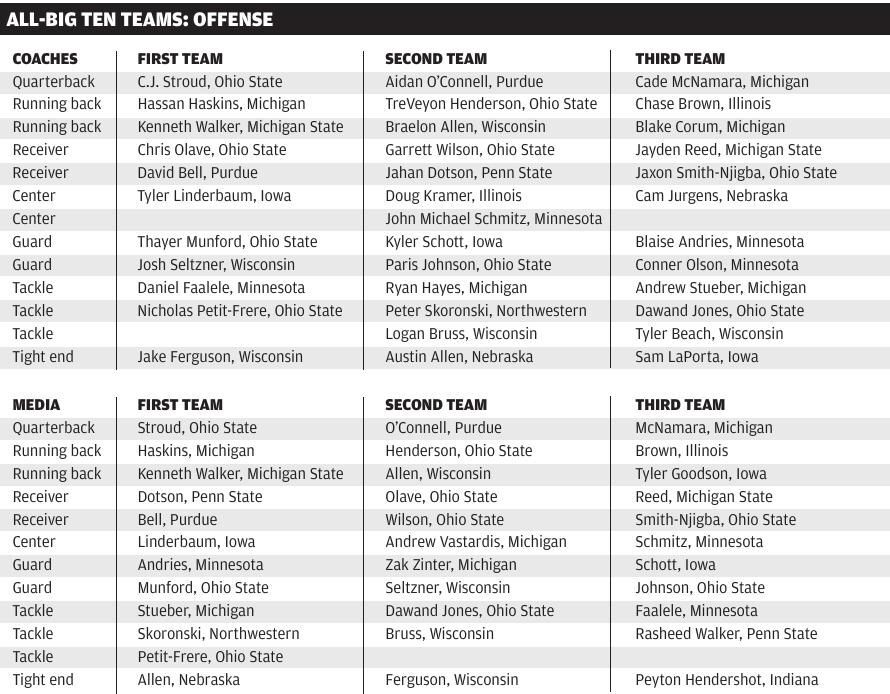 As the regular season draws to a close, here's a look at where teams stand in the power rankings.

Nebraska coaches will spend a significant portion of the time between now and Dec. 15's early signing period on the road recruiting and hostin…

The latest news and notes in Nebraska football recruiting, beginning with the Huskers addressing a need in the portal.

The four-year starting quarterback and only three-time captain in school history is entering his name into the NCAA’s transfer portal.

Steven M. Sipple: Martinez's remarkable grace and three other takeaways on his departure

Nebraska quarterback Adrian Martinez was forever calm and positive in an environment that often became tense and negative because of all the losing.

Husker recruiting ticker: More transfer offers go out on defense; some familiar names in the portal

The latest news and notes in Nebraska football recruiting.

He started at quarterback and ran the option for Tom Osborne and enjoyed his best year in 1990. Now, he's touted for his recruiting chops.