In a 2021 season where Nebraska losing close games became the norm and the only drama was the exact manner they’d find to fall short on any given gameday, Scott Frost’s fourth team saved perhaps its most inventive work for last.

In this bizarro world of this particular autumn, that also meant it was perhaps also the most predictable.

Nebraska, a team that struggled mightily on special teams all season long and developed a propensity for ill-timed turnovers and clinched a fifth straight losing season because of it, on Friday at Memorial Stadium lost to an Iowa team that put together another gleaming record because of its dominant special teams units and ability to take the football away.

The path to get to that result featured some new faces, namely Husker freshman quarterback Logan Smothers, who started hot in his first career start but also turned the ball over twice in the fourth quarter, and 22 straight points from the visitors over the 15 minutes, 27 seconds after Nebraska had worked its way to a 21-6 lead.

Even then, even after leading for 46:56 of game time, the final result felt predictable. Sure enough, Iowa owned the fourth quarter, 19-0.

“It’s unfortunate that a team so great can do so many things good and it just turns out bad,” said Cam Taylor-Britt, the talented four-year contributor who played his final game at Nebraska and now will begin preparing for the NFL. “I have no answer for this game, honestly. It just feels like it’s an ongoing dream and it happens week in and week out that we have some of the top teams in the country (held) to a certain amount of points, certain amount of yards, doing our thing and just one play or one hiccup just knocks the whole tower down.”

There are two ways to look at this season finale.

One is as just a footnote at a critical inflection point in the arc of the program under Frost. The Huskers on Friday said goodbye to a group of seniors — the exact number is not yet known, considering the fact that several have the choice of returning in 2022, trying their hand in the NFL Draft process or transferring.

Your Report Card: Iowa vs. Nebraska

It is possible that whatever junior quarterback Adrian Martinez, who spent Friday taking in the sights and sounds and Senior Day festivities in a black cap, letterman’s jacket and large immobilizing brace on his surgically repaired right shoulder, decides in the coming days is much more consequential for the program than whether NU lost by seven or won by two against the Hawkeyes.

So, too, are the four coaching vacancies Frost must fill. The head coach has several players who are off to the NFL and several more he’ll try to convince to stay for another season. His program has high school recruits to land and transfers to try to sell on the idea that Nebraska is an instant impact player or two away from parlaying an unsightly 2021 season into a much-improved 2022. The difference between 4-8 and 3-9 is unlikely to be the difference in landing those players and certainly has no bearing on whether Nebraska is able to identify the correct ones.

There is so much to do, and the clock started ticking in earnest not when Iowa quarterback Spencer Petras took a knee and rolled the final seconds off of the Huskers’ season, but when Frost fired four offensive assistant coaches back on Nov. 8.

There is, however, a second way to think about another blue Black Friday for Nebraska.

From kickoff, this felt like a rivalry game. It felt intense when Smothers engineered a pair of 75-yard touchdown drives in the first half and a 94-yard beauty in the third quarter. It felt like bad blood when Kirk Ferentz, according to the Iowa radio broadcast, took umbrage with the public address noise level while his offense tried to operate. It felt like a potential breakthrough for the Huskers — big or small would have been to each individual to decide — when they took a commanding 21-6 lead at the end of that nine-play, 94-yard march.

Smothers barreled his way to his second rushing touchdown and you could almost start to think about the Crimson and Cream invasion of the West sideline to lay hands on the Heroes Trophy for the first time since 2014.

It did not feel like an afterthought or a mile marker or a let’s-get-this-over-with-and-get-on-to-the-offseason-work kind of afternoon in front of 86,541.

“Everything we’ve been through this year as a team, 99% of teams would have folded and quit,” Frost said. “There’s no quit in these guys.”

But then Iowa’s rock-solid kicker Caleb Shudak knocked his third field goal through the uprights and trimmed the lead to 21-9 with 27 seconds left in the third quarter.

Latest special teams lapse rings the loudest for Frost, who enters offseason with a big third-phase question to answer

Nebraska went three-and-out — Smothers and Jaquez Yant botched an exchange that turned what looked like a productive Smothers run into a second-and-11 — and Iowa’s resplendent special teams came through with the biggest play of the game. Defensive back Henry Marchese stormed off the left flank of NU’s three-man punt protection shield untouched and blocked William Przystup’s punt and Kyler Fisher scooped it up and scored from 14 yards out. Now it’s 21-16 and the game is fully in Iowa’s control, even if the Huskers still led.

It was the kind of moment that perhaps had staying power in both versions of Friday’s events, the micro view and the macro. Perhaps the way Marchese explained it to Iowa reporters after the game — that his punt return group all week figured that if NU punted from the left hash, they had a good chance of dialing up a block and getting home — is why Frost sounded closer than ever after the game like a coach who needs a full-time coordinator to handle special teams.

“Special teams, two weeks in a row, and this year, I’ve got to do a better job making sure that we’re up to speed on that,” Frost said six days after NU gave up a 91-yard kick return touchdown to Wisconsin in a seven-point loss. “I think we made a lot of progress, but I don’t know if the timing was off, if we were late, if somebody missed an assignment. I didn’t see it. I’ll watch it in about 10 minutes.”

Back in the fray, Nebraska pushed the ball across midfield but Smothers fumbled another exchange — this time with Brody Belt — and Iowa recovered. The Hawkeyes did nothing with the ball but pinned NU deep in its own territory and Smothers took an intentional grounding penalty for a safety to make it 21-18 with 9:56 to go. Shudak tied the game with his fourth field goal 2:35 later and then Tyler Goodson (23 carries, 156 yards) finally broke free for a 55-yard run, setting up a Petras 2-yard touchdown for a 28-21 Hawkeye lead with 2:58 to go.

Smothers led Nebraska down to the Iowa 28 in the final minute, but then threw to the post just as Levi Falck, running an option route, read the defense differently and broke off his route. Jermari Harris recorded Iowa’s 22nd interception of the season, and the game was over.

“It’s kind of been death by paper cuts this year, and the same thing happened today,” Frost said. “I stand there and want to stop the negative things from happening, stop the momentum and talk to the kids, and that was a lot of bad plays in a row. Credit to them, they made the plays when they needed to and we didn’t.”

The 2021 Nebraska football season has so many statistics that defy logic, it’s difficult to decide which is the most incredible. They are the first team in college football history to lose eight games by one possession in the same season. They played nine Big Ten games and scored exactly as many points as their opponents. Final record in those games: 1-8.

They gave up nonoffensive points in seven of those losses. Including the nine Iowa tallied on the punt block and safety, opponents scored 43 points via defense and special teams. The margin in those seven Nebraska losses: 44.

Frost has been in charge at his alma mater for four full seasons now and has overseen two separate six-game losing streaks, including the second half of this campaign.

The analytics say Nebraska is one of the 25 or 30 best teams in the country. The eye test in September, when losses like this one were new-ish and came against Oklahoma and Michigan State and Michigan, maybe could tell a similar story.

The scoreboard? Entirely different story. Nebraska finished with its worst single-season winning percentage since 1957 and Frost is now 15-29 overall. He is 6-17 against the Big Ten West and the only team in the division NU has won its most recent game against is Northwestern, which it pounded 56-7 back on an October afternoon that instead of a turning point became a lone bright spot.

The next team on Nebraska’s schedule is, you guessed it, the Wildcats. In Dublin, Ireland, on Aug. 27, 2022. How weird will that be? How weird has this been?

So many moving pieces will occupy the interim. For the next nine months exactly, the question is whether all of the upcoming happenings will result in any actual change.

Photos: Check out the sights from Nebraska and Iowa's latest Black Friday clash

Jaquez Yant went UP 🚀@HuskerFBNation makes it 14-3 in the first half against Iowa 👀 pic.twitter.com/LIYaKsxqlo

The scene: Adrian's senior salute, and the view of gameday for a new fan from Liverpool

Adrian Martinez's future with the Huskers is unclear, but he received a warm ovation from fans during the pregame senior ceremony.

Here are four statistical categories that factored in the outcome — Iowa 28-21 — in Nebraska's game Friday at Memorial Stadium.

Iowa's Henry Marchese saw the need for a big play, and he made it, and Kyler Fisher cashed it in as the Hawkeyes beat Nebraska again.

A look at some talking points after the Huskers' game against Iowa on Friday at Memorial Stadium.

After allowing just two 100-yard rushers in the Huskers' first 10 games, the Blackshirts gave up back-to-back big running back performances.

On NU’s final five offensive possessions — three with the lead, one tied and one trailing — the home team managed just a net of 8 yards on 10 carries.

Sizing up a crucial, difficult-to-navigate stretch that has already begun for Husker HC Scott Frost

There is hardly any time for wound-licking. Scott Frost and the Husker program have a crucial three weeks ahead — here's a closer look.

Bill Busch joined Nebraska's staff in February as a defensive analyst. Could he become the Huskers' next special-teams coach? Don't rule it out. 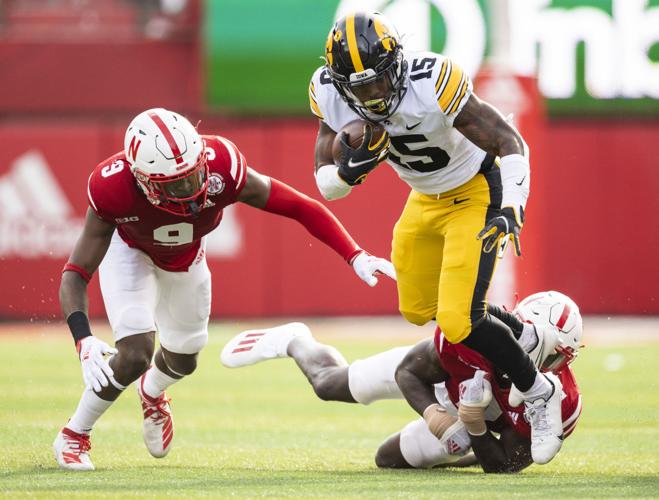 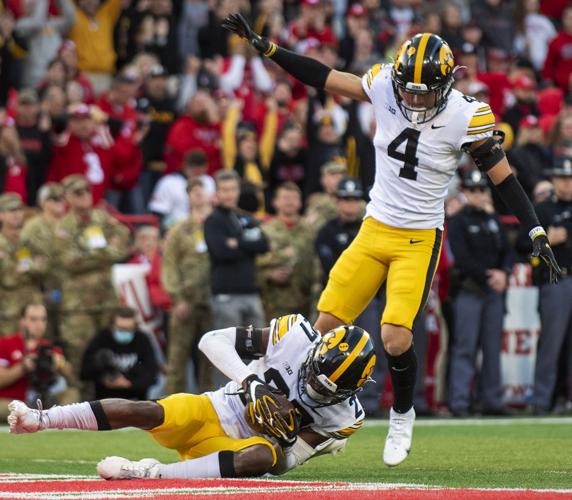 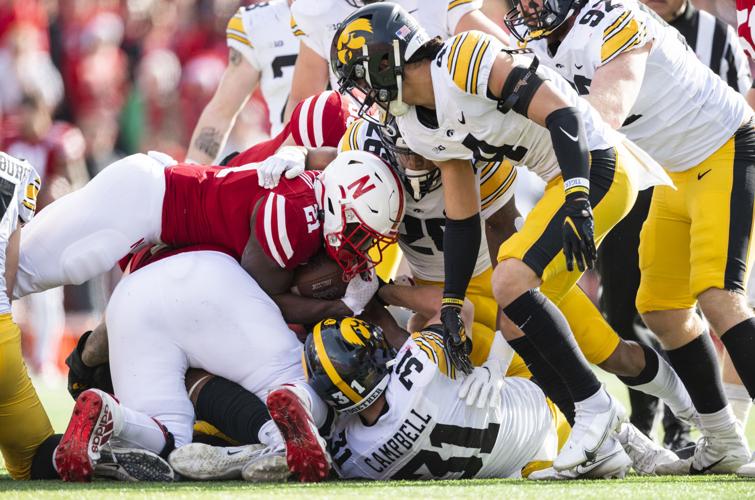 Nebraska's Marvin Scott (21) gets stopped by a number of Iowa players in the first quarter Friday at Memorial Stadium.