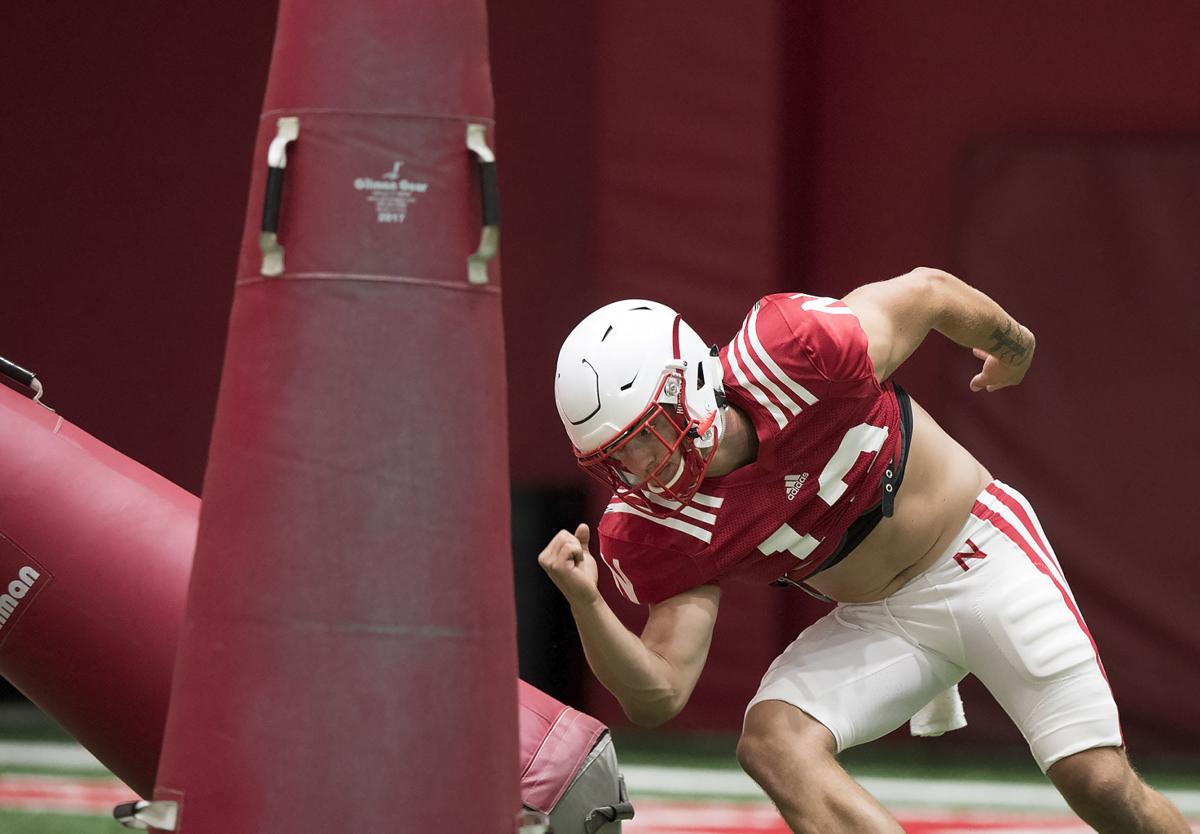 Nebraska outside linebacker JoJo Domann runs a drill during practice on Aug. 14, 2019, at Hawks Championship Center. 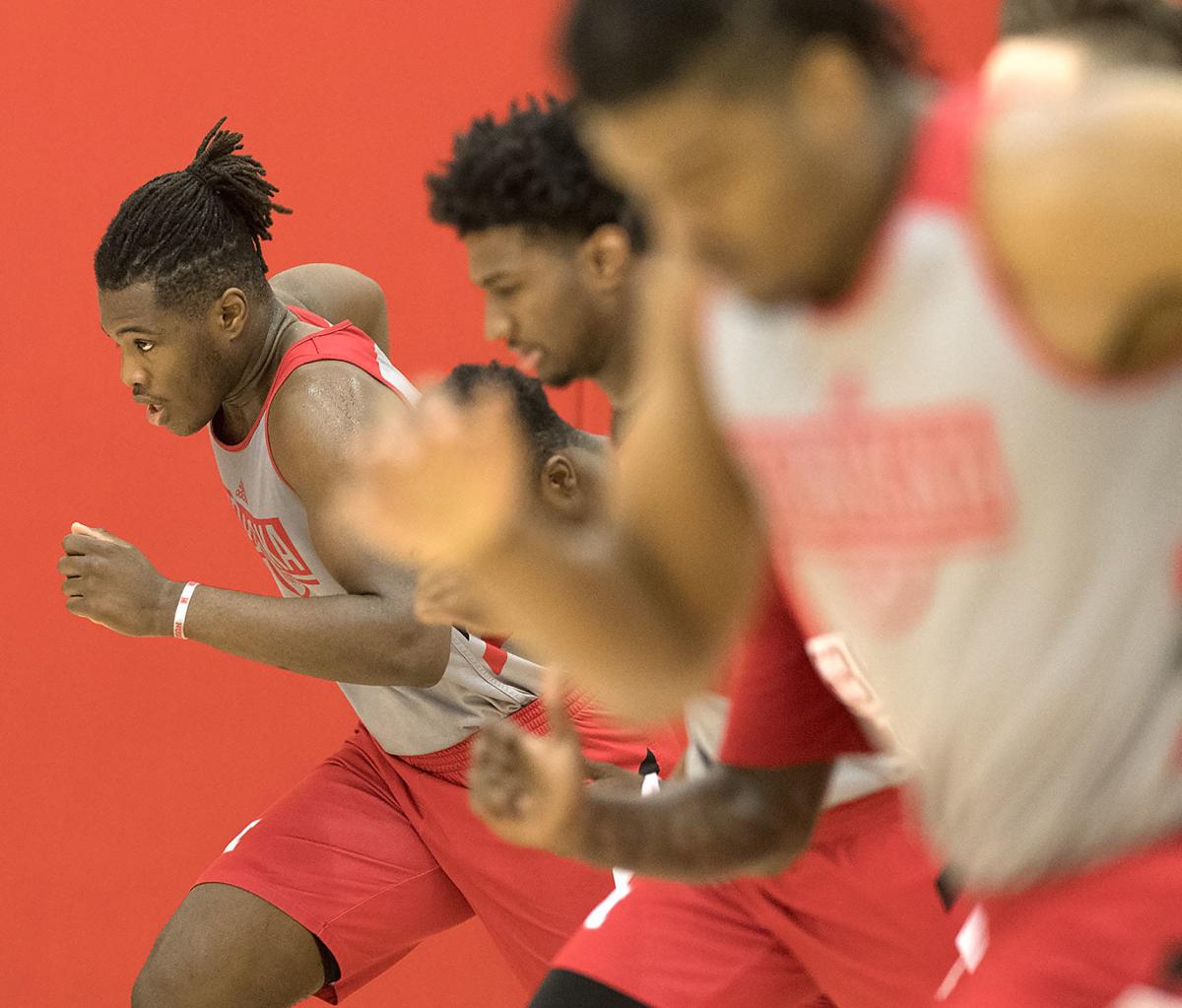 Yvan Ouedraogo (left) runs alongside teammates during the first official practice at Hendricks Training Center in September 2019. The NCAA's Division I Council on Wednesday voted to allow college football and men's and women's basketball player to return to campuses for voluntary workouts in June.

The NCAA’s Division I Council on Wednesday voted to allow college football players and other student athletes to return to voluntary, on-campus workouts when a current ban ends at the end of May.

That decision is the latest in a series of steps that point toward Nebraska football and others around the country beginning to slowly work back into action in June after a hiatus that has extended over two months due to the coronavirus pandemic.

The council's vote applied to football and men's and women's basketball, and lasts through the month of June. Schools over that time can also continue eight hours per week of virtual team activities.

“We encourage each school to use its discretion to make the best decisions possible for football and basketball student-athletes within the appropriate resocialization framework,” M. Grace Calhoun, the council chair and Penn's athletic director, said in a news release. “Allowing for voluntary athletics activity acknowledges that reopening our campuses will be an individual decision but should be based on advice from medical experts.”

Another hurdle remaining: The Big Ten has its own ban on all organized team activities that is set to end June 1. If that moratorium is also lifted, NU and other schools will likely be back to work in some capacity.

The vote from the Division I council came with stipulations. Schools must follow all federal, state and local guidelines regarding the coronavirus, including social distancing measures, group size restrictions and anything else. In addition, workouts must be initiated by student-athletes. Coaches cannot be present, cannot direct workouts and can't have workout results reported back to them.

It would still mark a significant development, though, considering the Husker players who have been in town over the past two months have not been able to use the team’s weight room in North Stadium.

Ohio State athletic director Gene Smith on Wednesday told reporters that the Buckeyes are targeting a June 8 return to campus for their players, with voluntary workouts set to begin around then, assuming the Big Ten’s decision follows the path of the NCAA’s.

In a recent radio interview, Nebraska head coach Scott Frost said he believes his team has done a good job of staying in shape while working out on their own during the shutdown.

“I think we're handling that as well as anybody," Frost said then. "I'm really confident in our guys’ conditioning right now and the fact that they've continued to be able to get work done. Obviously, that's a little bit easier here in Lincoln because this hasn't been as bad in Nebraska as some places. But we have an idea of what every single one of our guys is doing, where they're doing it, who they are, who they're in contact with.

"For the kids that stayed in town, we know what's going on with them. For the kids back home, we're trying to help them find solutions to stay in shape. I think our kids will come back and practice for sure when the time is right. Especially if everything opens up on June 1, that will give us plenty of time to get ready for a camp."

Most of the players are already back in Lincoln, having filtered in over recent weeks. There will be many more logistical challenges — the remaining players coming back from different parts of the country, scheduling small groups, managing a large number of players overall, etc. — but the first big move toward returning to football appears to be drawing closer.

Chris McGraw comes from Division III Otterbein (Ohio) University, where he was sidelined with an injury for the entire season.

Piatkowski, who averaged 21.5 points as a Husker in 1993-94, sometimes wonders what it would have been like to play for the Chicago Bulls during the dynasty years.

John Cook said he doesn't expect to play many games outside of the league; and discussed the potential of fans at the Devaney Center.

Nebraska should be longer, stronger and more athletic in 2020-21 than at any point in Fred Hoiberg's first season as head coach. What could it mean?

Moos makes it official: NU to begin bringing student-athletes back to campus on June 1

Moos said Nebraska's plan for bringing student-athletes back to campus is detailed and thorough enough that the Big Ten requested that it be shared with other schools in the conference.

The latest in Nebraska football recruiting includes a look at the Huskers' virtual presentation through the eyes of a California lineman.

Husker AD says variety of scenarios being considered, including a shortened football season

At this point, Bill Moos says, he can't say for certain that Nebraska will play all — or even any — of its non-conference games.

Teddy Prochazka and Henry Lutovsky are NU's two longest-tenured 2021 commits, and they've found their own unique ways of competing this spring.

No more 'Last Dance,' but Hoiberg recalls his first dance with Michael Jordan and the Bulls

With "The Last Dance" over, read about Husker coach Fred Hoiberg's first dance against Michael Jordan in the NBA.

Nebraska outside linebacker JoJo Domann runs a drill during practice on Aug. 14, 2019, at Hawks Championship Center.

Yvan Ouedraogo (left) runs alongside teammates during the first official practice at Hendricks Training Center in September 2019. The NCAA's Division I Council on Wednesday voted to allow college football and men's and women's basketball player to return to campuses for voluntary workouts in June.