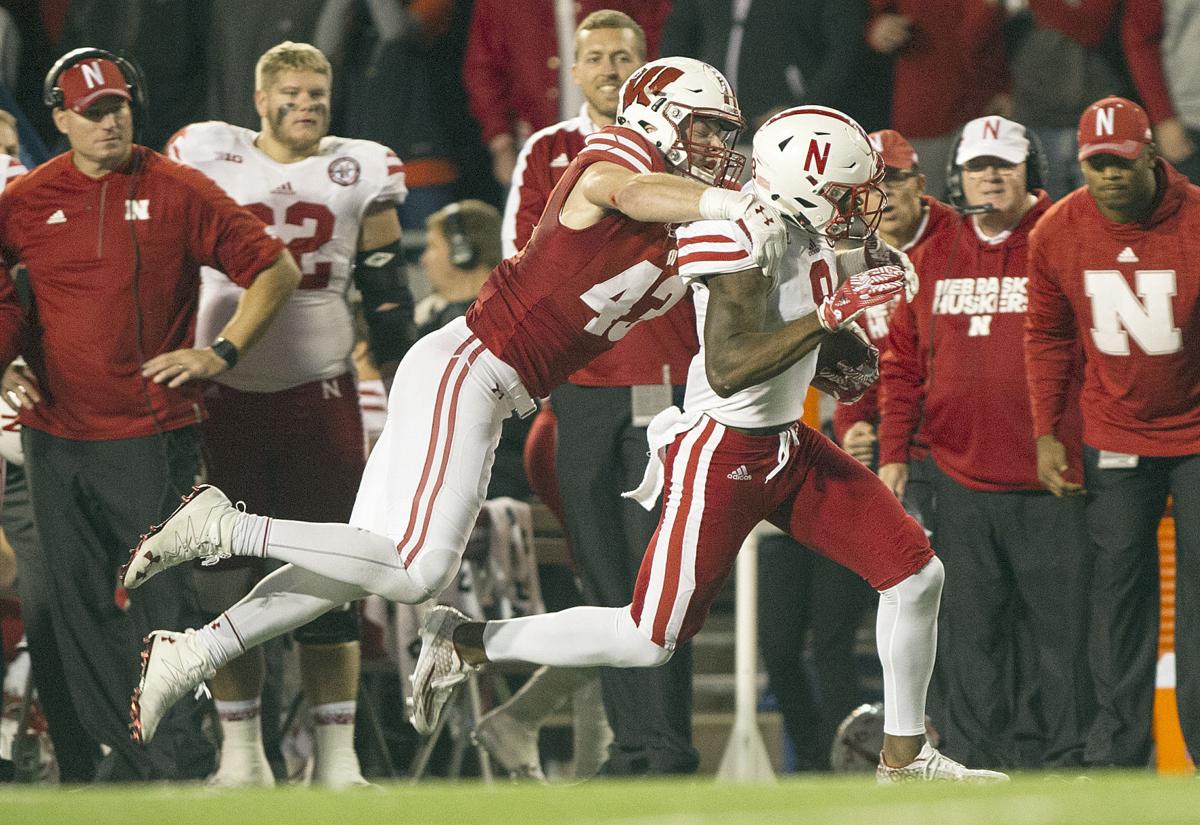 Nebraska's Stanley Morgan picks up a big gain in the fourth quarter on a pass from Tommy Armstrong Oct. 29 against Wisconsin in Madison, Wis. 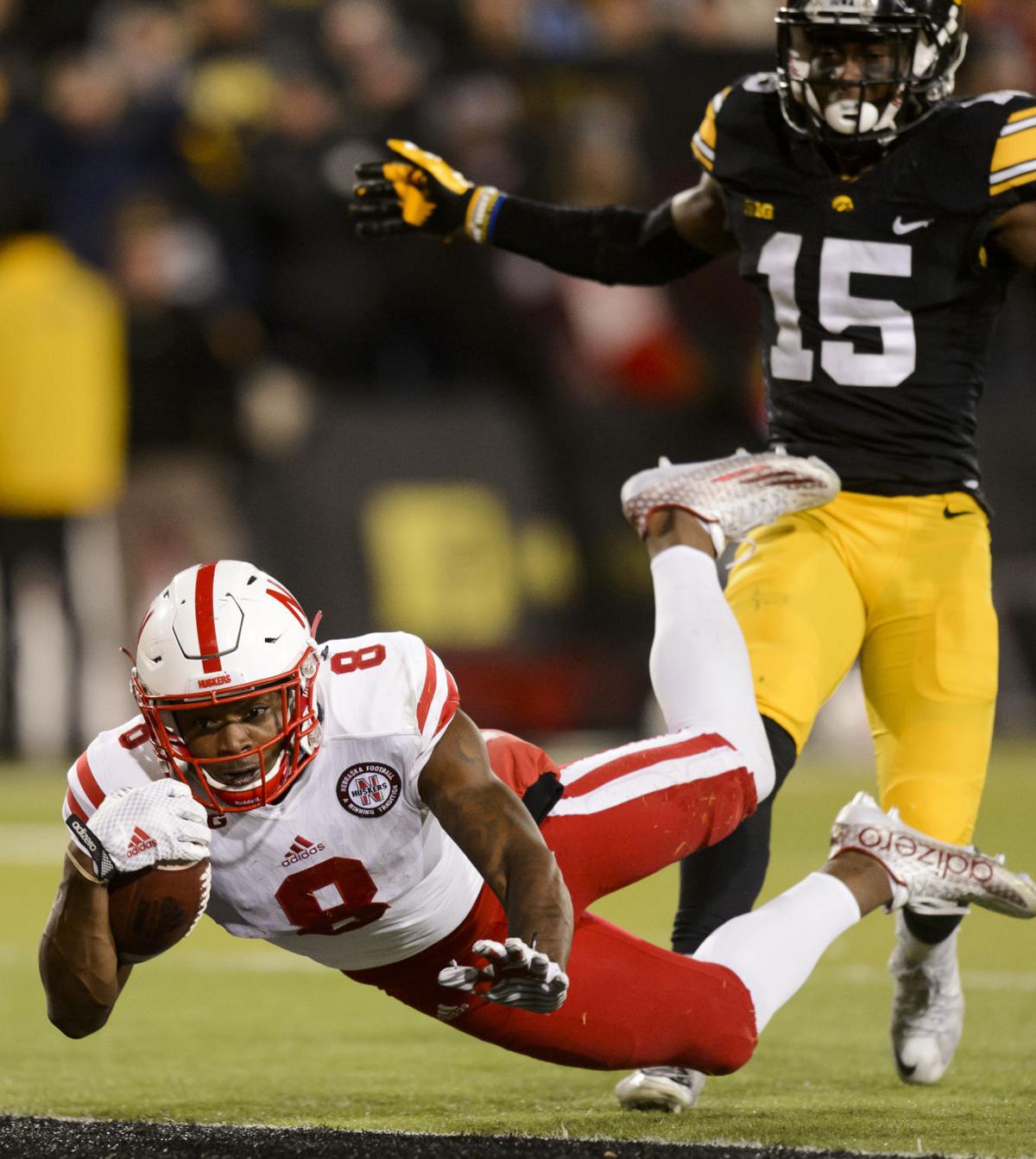 Nebraska wide receiver Stanley Morgan dives in for a touchdown, beating coverage by Iowa defensive back Joshua Jackson (15) during the third quarter  Nov. 25 at Kinnick Stadium in Iowa City, Iowa.

There's this go-to routine a few Huskers use in an attempt to make a football teammate crack while he's talking to the media. They'll stand amid the circle of reporters, quiet and serious, sometimes right off the shoulder of their friend until he notices their presence and loses his train of thought.

It's a fun joke, but admittedly worn a bit thin by now. So give wide receiver Stanley Morgan points for originality when on Tuesday he decided to mess with cornerback Chris Jones in a slightly different manner.

Jones had his back about a foot from a wall, surrounded by media. Morgan decided to shuffle between Jones and that wall as though that was the best route to the locker room. Then he shuffled back the other way, deadpan expression, and did it again.

There's definitely a goofy side to Morgan. His teammates certainly see it.

But after Morgan concluded his joke Tuesday and found a clearer path to the locker room, Jones had something serious to say about him.

"Every day, that kid, he gets better," the cornerback said. "Stan, he goes out there every day and gives it his best shot whether he's not feeling it or it's a day where he's on-point."

The Huskers need that, because it's a critical transition time in Morgan's career. The receiver from New Orleans is about to move from his young-gun stage at Nebraska to one of the old men in his position group. (Old men in this case is uttered with jealousy, understanding most would give up red meat to be 20 and gifted with such athleticism.)

Gone next year are Jordan Westerkamp, Alonzo Moore and Brandon Reilly. The 6-foot-1, 200-pound Morgan will be a junior, and as proven as any weapon Nebraska has in the passing game.

Wide receivers coach Keith Williams is going to miss those seniors a lot, but he believes Morgan is ready for whatever added responsibility might come his way in 2017.

"I feel good about it," Williams said. "He's ready. He's played a lot of football and he's been around some good veterans. He learned from some good guys, so the transition should be smooth for him."

Morgan is going to miss the older guys, too. He fit in quickly with them and they taught him a lot.

"Those guys have been in the huddle since I got here. It's just a comfort having those guys with me. ... Now I'm going to the leader next year, be one of those guys to step up. It's going to be a little different," he said.

Different doesn't have to be bad.

It'd be a relatively easy guess that different is going to mean more targets for Morgan next season in an offense that will have a different quarterback, likely Tanner Lee or Patrick O'Brien.

Among players who will be on the roster in 2017, only De'Mornay Pierson-El has more career catches than Morgan. Pierson-El, having played half a season more than Morgan, has 60 to Morgan's 55.

But Morgan has double the catches of Pierson-El this season, and his 30 receptions for 425 yards this fall were second only to Westerkamp. This follows a freshman campaign in which he caught 25 passes for 304 yards.

If any more proof is needed of the faith his team has in him, recall the final play of the Nebraska-Wisconsin game in overtime. With the Big Ten West Division at stake, it was Morgan who was targeted in the end zone.

It's been a "crazy fast" ride to this point, Morgan will tell you. Remember, he only got on campus in the summer of 2015. He never redshirted.

He sees the positive in that. "It's great to see that I have a lot to work on, and can just keep working."

Morgan isn't about to guess how different the offense might look next year with a new style of quarterback, or exactly how that change will impact him, though many will assume it to be favorable.

For certain, Nebraska's passing game will need to find more consistency. Dissect it as you will, but the Huskers ended the regular season completing just 50.8 percent of their passes.

The quarterback's missed throws own a slice of that pie, as do throwaways because of scrambles from defensive pressure. But within those misses are also a few plays some receivers will be the first to say they could have made.

Morgan is a hard grader and that isn't about to change.

"We're very tough on ourselves," Morgan said. "We didn't do what we wanted to do, but we got the job done as best as we can. But I know we wanted more out of this year than we had and I know all the guys will back me up if I say that."

The good news for him is there are more Saturdays in his future to be a game-changer. The best, it would seem, is still ahead for No. 8 on offense. That's certainly what No. 8 on defense thinks.

"Every chance I get to go against him, I want my best to come out and I want his best to come out," Jones said. "For him to step up the next couple years, it's going to be tremendous to watch him."

Nebraska's quarterback situation has been in a state of flux for a month, and it remains that way as the Huskers prepare for the Dec. 30 Music…

Chris Jones has a valuable opinion in sizing up Nebraska's younger wide receivers. The senior cornerback sees them all the time while they're …

The comment was innocent, and certainly not meant to disparage the Nebraska football program or its Big Ten cohorts.

Nebraska receivers coach Keith Williams is set to enter a plea to a DUI charge.

Nebraska's Stanley Morgan picks up a big gain in the fourth quarter on a pass from Tommy Armstrong Oct. 29 against Wisconsin in Madison, Wis.

Nebraska wide receiver Stanley Morgan dives in for a touchdown, beating coverage by Iowa defensive back Joshua Jackson (15) during the third quarter  Nov. 25 at Kinnick Stadium in Iowa City, Iowa.