Moos shuts down talk of Huskers playing football this fall: 'That was not permissible'
0 Comments
Share this
1 of 2 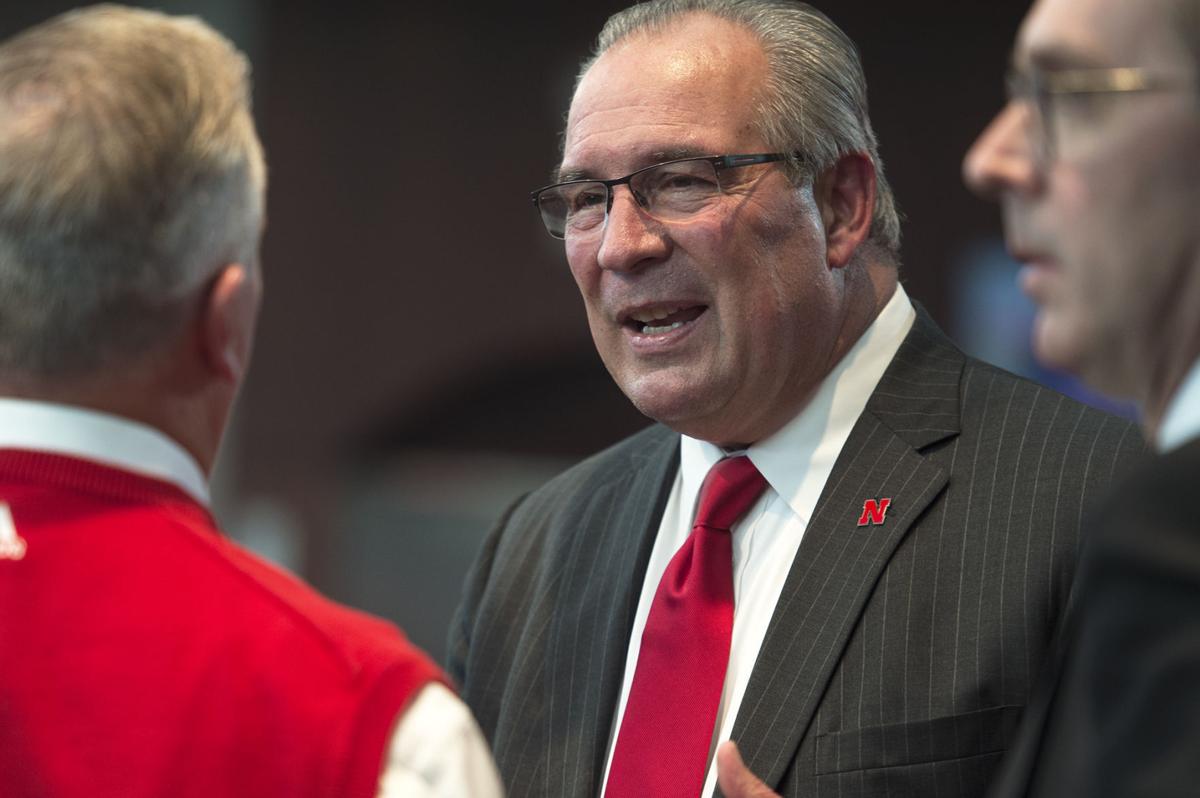 Bill Moos talks with members of the University of Nebraska administration following a news conference in October 2017 at Memorial Stadium, when Moos was named Nebraska's athletic director. 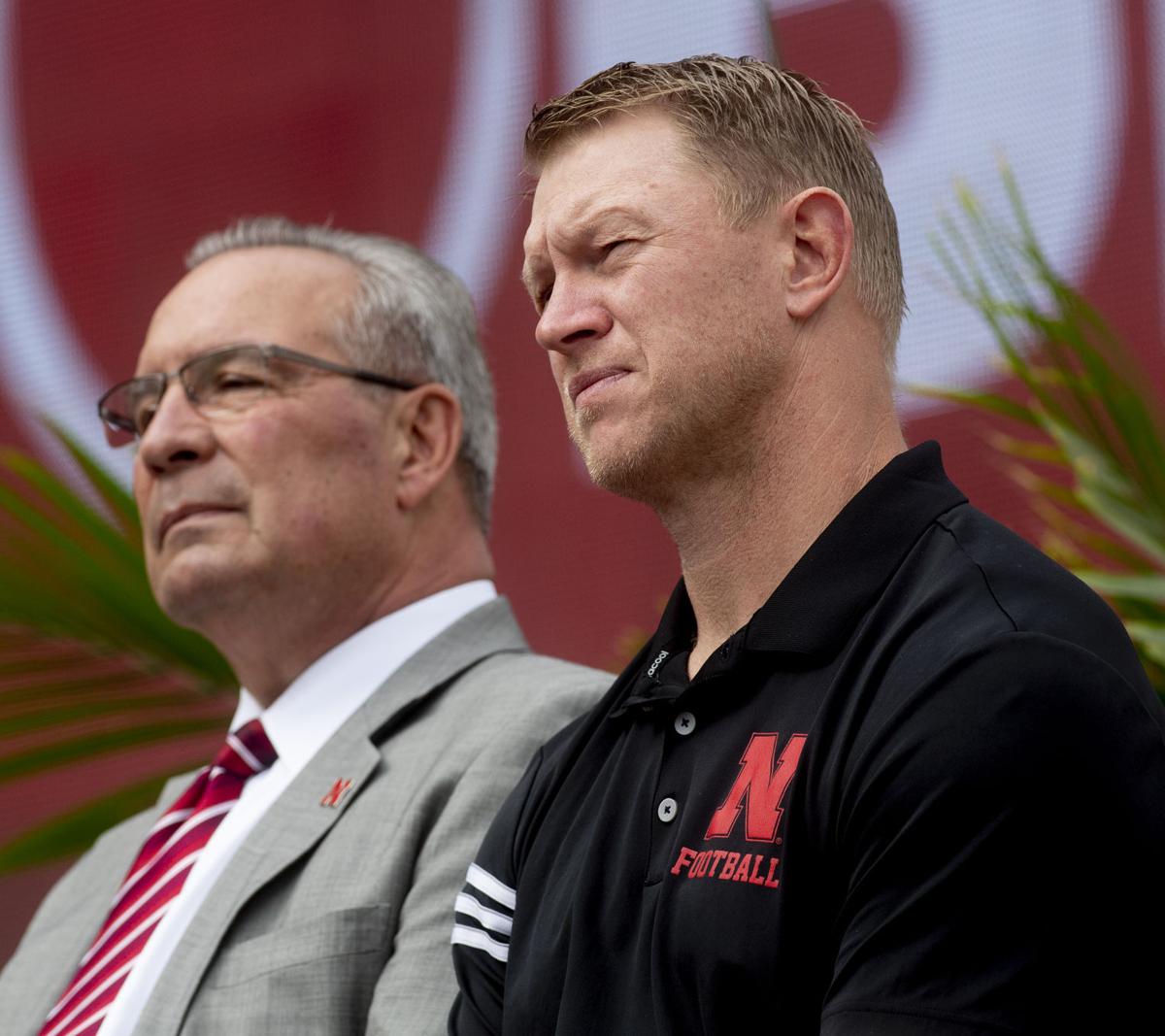 Nebraska's efforts to play football this fall are apparently over.

NU athletic director Bill Moos said Thursday on the "Husker Sports Nightly" radio program that until a day earlier the Huskers had held out hope of playing despite the Big Ten postponing its season Tuesday, but that it ultimately will not happen.

"That was not permissible, primarily, I feel, because the season really wasn't canceled. It was postponed," Moos said. "That means that hopefully we're going to play in the spring or sometime after (Jan. 1). That would have made it difficult to still play a series of nonconference games in the fall and then come back and play a conference season in the spring.

Steven M. Sipple: Frost catches heat from pundits, but has absolutely no reason to apologize

"At least, that's how the conference felt. That's not how Scott (Frost) and I felt. At the end of the day, we are proud members of the Big Ten. It's a prestigious conference and we will be in compliance. We thought, all the way until actually (Wednesday) that we might have a chance to do that."

Nebraska had been preparing for the possibility of playing other teams and both made and received calls about potential opponents, but Moos said the focus instead would have to be about potentially playing in the spring.

"This has taken five months and then it all came to an end fairly quickly," Moos said. "And that certainly is frustrating. I feel for our coaches, who have been working so hard, and for our fans who were getting excited, and most of all for the student-athletes, who have worked very, very diligently and had their hopes (up).

"Hopefully we can keep their morale where it can be and keep moving through this."

In the end, the distinction between a postponed season and a canceled one is what kept NU, Ohio State and others from playing this fall. Several coaches have already started talking in earnest about a second-semester season in hopes of seeing that come to fruition even though there will be extensive logistical challenges and many see it as an unlikely option. Both Buckeye head coach Ryan Day and Purdue coach Jeff Brohm have released detailed plans about how a potential second-semester season might look.

He made it clear he thought that NU was uniquely positioned in the league to host competition this fall despite the coronavirus pandemic.

"We have done everything to a T in regard to testing protocols," Moos said. "We could write the book on how to get a football team, volleyball team, soccer team ready for competition in the midst of a worldwide pandemic. And so we felt that if indeed the season was canceled, that we needed to be prepared to look at some options and some alternatives to hopefully play six, seven, eight, nine, 10 games with opponents from outside of the Big Ten."

Moos said he didn't feel as though the back-and-forth between NU and the Big Ten and the Huskers' status as the only school in the league to openly disagree with the conference's decision to postpone fall sports will harm the relationship between the two.

He also lavished praise on Frost, NU's football coach, and how he's handled the past week and, more generally, the march through the pandemic the past five months.

"I thought it was outstanding. Scott Frost is not only very articulate, he’s very smart, he’s passionate, he’s caring," Moos said. "He isn't just saying these things to be talking. He means this, and we need to remember — and our fans need to remember — that he made those comments before any decision was made on the season and such. He voiced what he felt, I thought he was very appropriate and respectful to the Big Ten, as we all are.

"Let me tell you, Scott Frost will have a great record as the football coach at the University of Nebraska, but how he has handled this and what his priorities have been is what he’s all about. I watched him and listened to that and never have I ever been in doubt that he’s the right guy to be leading this football program, and I hope everybody realizes how fortunate we are to have him."

Moos also addressed the major budget implications that a postponed football season will have on NU's athletic department, noting that the 17 staff cuts and 10% budget reduction carried out earlier this summer were with a potential $12-15 million deficit in mind. Without football, that deficit is now projected to be north of $100 million.

"If we can get some television revenue or parts of it from a nontraditional (football) season, that will help," Moos said. "We've been meeting for quite some time and now have a solid feel for the dilemma we're facing. My senior staff right now as we're speaking is in our conference rooms looking at all the different ways we can address this.

"That is a daunting exercise."

Still, Moos said he's confident that perseverance will win out in the end.

"This is an amazing state and we will lock arms and we will march through this much like we did in the aftermath of the floods last year," Moos said. "We'll get there. It will make us stronger and we will come out better in the end. I have a strong, strong care and feelings for the people that are going to be affected both in our department, at the university, in Lincoln and throughout the entire state of Nebraska."

Here's what people, including Nebraska players, are saying about the Big Ten's decision to postpone fall sports

I’d do anything to strap it up and play for @coach_frost one more time. That’s the type of man you want running your team and representing your state! #GBR

Honestly, if we did a red vs. white scrimmage every week for the fall I wouldn’t care...I just want to play

sooooo what does that mean for us early enrollees??? https://t.co/vjZIgJPhqm

one thing, then the opposite. do better @bigten https://t.co/dz2DIsCdob

I believe that these players deserve to see the medical evidence that drove this decision...how and why is it different from what other conferences are hearing?

Nebraska and the @Big12Conference door may in fact be opening.

This is a cowardly move. The guys behind the desks make a anti player move yet again. When do we get a voice? Why is it just “well let’s try” when it comes to school and work? We want to play and we want to play in the fall. #LetUsPlay pic.twitter.com/UhIqMLrg1y

They released a schedule like seven hours ago. To postpone that quickly after the fact is truly a shocking lack of vision and clearly massive communication issues.

The Big Ten is a disaster. And spring isn’t happening. Feel bad for Big Ten fans.

Hard to fathom what is happening. I feel so bad for the players, many of whom build their lives and futures around the game. So brutal. 2020 can go jump off a cliff.

Nebraska has entered the transfer portal.

A staff member from a prominent Big 10 program just told me he is "pissed. Sad. Speechless. Shocked. All mixed into one." Says the players are devastated.

Nebraska has at least one suitor for a game this fall.

Steven M. Sipple steps in with five thoughts from a "historically dark day" for Nebraska and explains why the move feels shocking.

Nebraska has been recruiting Thomas Fidone hard since first offering him last fall. Now, the wait could be almost over.

Glen Snodgrass and his wife, the parents of NU linebacker Garrett Snodgrass, are crafting a letter to the Big Ten on behalf of Husker parents.

As football stumbles forward, college hoops is looking for ways to put on a season. And yes, talks of 'bubble' floating around

"Very confident" is a phrase not uttered in relation to sports right now. But college basketball officials seem adamant on a season.

"I don't think there should be any concerns at all about these athletes going out on a football field and playing a game."

Bill Moos talks with members of the University of Nebraska administration following a news conference in October 2017 at Memorial Stadium, when Moos was named Nebraska's athletic director.