Milt Tenopir, one of the architects of 'The Pipeline,' dies
0 Comments
Share this
1 of 3 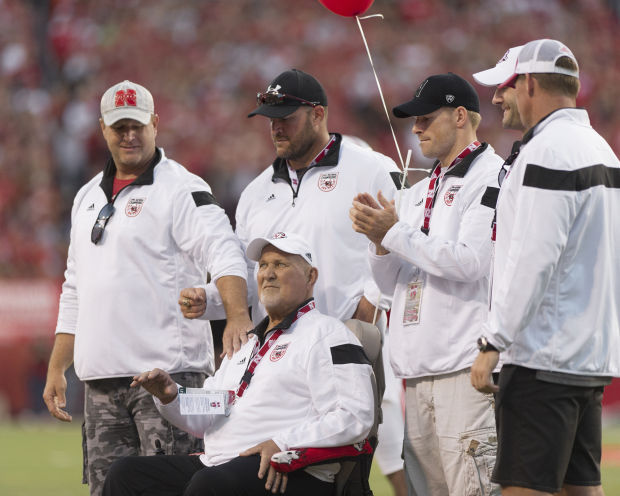 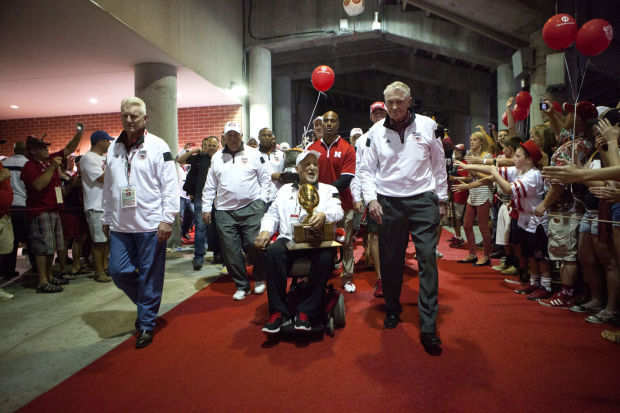 Milt Tenopir (center) holds the 1994 national championship trophy as the '94 Huskers have their own tunnel walk before the kickoff of the 2014 Miami game at Memorial Stadium. 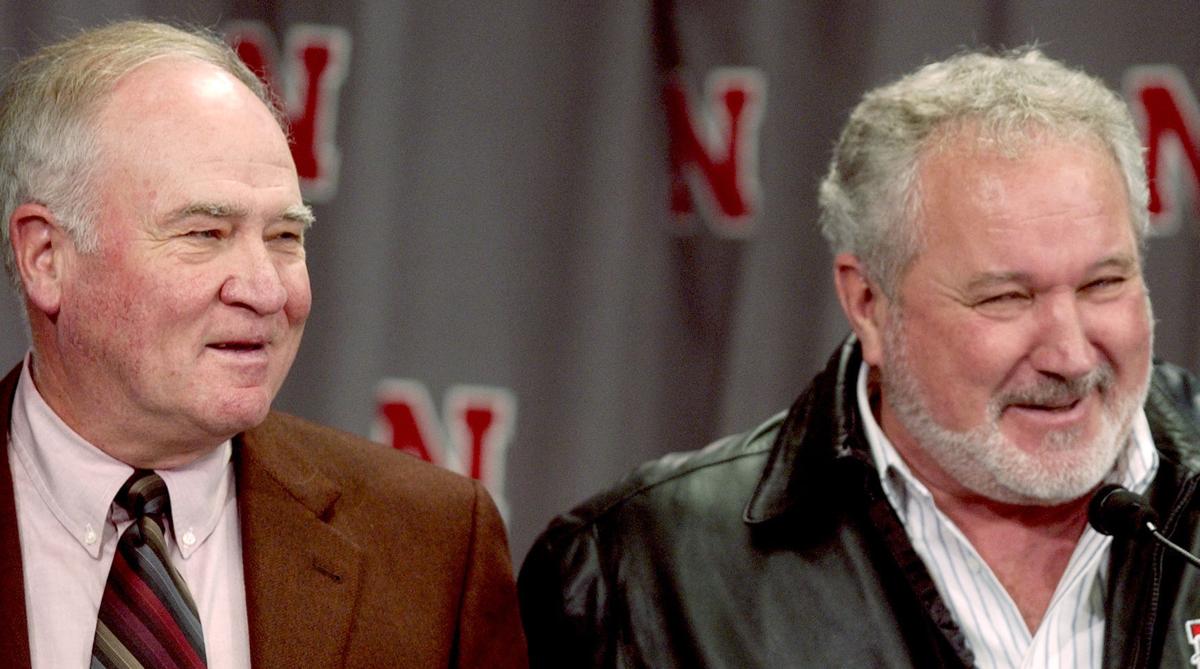 Milt Tenopir, who built the "Pipeline" and coached the best offensive lines in Nebraska football history, died Monday at age 76 after a long battle with leukemia.

Jim Tenopir confirmed his brother's passing to the Journal Star on Monday night.

"He was such a great coach because he, like Dan Young — and from what I heard, Cletus Fischer before him — was like a father to his players, and you didn't want to disappoint Milt, ever," said Joel Wilks, a walk-on from Hastings who eventually started on the 1994 NU offensive line. "I saw him just last weekend. He was laying in the hospital and I walked in and he yells, 'Buddah, you weren't the biggest or the most talented, but you had the most pancakes in the line.'

"Milt did that for every player he coached."

Tenopir, who retired in 2003, coached the likes of Dave Rimington, Dean Steinkuhler, Brenden Stai, Zach Wiegert, Aaron Graham, Jake Young, Will Shields and 21 total All-Americans. He had 27 players who were taken in the first three rounds of the NFL Draft.

Former Nebraska defensive coordinator Charlie McBride, who visited with Tenopir recently, said, "I think the thing I'll remember most about Milt is the passion for his job, what he did and how much the players meant to him. He was one of those guys that players really loved. There wasn't anybody who didn't like Milt."

"I hired three high school coaches — Milt at McCook, Frank Solich at Lincoln Southeast and Dan Young at Omaha Westside — as grad assistants, and they left good jobs and made big sacrifices to come to Nebraska," Osborne told the Journal Star on Monday. "Milt was one of the main reasons we had good offensive lines after good offensive lines every year."

While he rose to be a giant in his profession, Tenopir just as fondly recalled when he was an up-and-comer in Lincoln. He remembered getting about $1,000 his first year as a grad assistant. He also drove a dump truck in the day and painted houses at night. "It was a good year, though," he quipped. "I bought my kids 10-speed bikes, I remember that."

Tenopir always credited the late Dan Young, who died in 2010, with equal billing for the offensive line production that dominated the nation year after year. The two coached together 19 years.

Tenopir once said, "Everybody says ‘Milt did this and Milt did that,' and it wasn’t Milt Tenopir. It was Milt Tenopir and Dan Young."

He said that one benefit of retirement, even though he still attended many practices, was that he got to see the games live without waiting for game film on Saturday nights. He also said, "I don't have to worry about the red zone anymore."

Even so, when a grad assistant would offer him a copy of the tape from each game last year, Tenopir would gladly accept. He didn't grade players like the old days. "Well, in my own mind, I might," Tenopir admitted.

One of Tenopir's greatest accomplishments came in 1995. His offensive line lost four starters to graduation, including Stai and Wiegert, and only Graham was back as a starter. That season, Graham led the rebuilt line and Nebraska averaged almost 400 yards a game rushing on its way to the national crown.

One of Tenopir's final moments in the public spotlight came in September of 2014 when he helped lead the 1994 national championship team out of the Memorial Stadium tunnel as part of the team's 20th reunion.

"Cletus Fischer, then Milt and Dan, all had that passion for football and their players," Osborne said. "He was very much respected by all the coaches and all of his players, maybe more than anybody I've ever known."

Osborne said the most important part of Tenopir's success was his honesty and his loyalty to his players and the team.

"He would be firm but never denigrate or embarrass any player and he earned their loyalty and devotion," Osborne said. "Just look at how the current players greeted him at practice last Thursday."

Added former Husker lineman Tom Welter, "He kept his motor running and revved us up because were his kids, and if he got on you, you probably deserved it. I know I did."

Just last week, Tenopir made an appearance at a Nebraska football practice.

"Coach Tenopir's here," Mike Riley told his team when Thursday's practice concluded. "Right through that door, there he is. Why don't you guys, if you want to, go out that way, give him a high-five, tell him it's good to have him?"

The players all came in together and on the count of three yelled "Milt!" and then proceeded to shake hands with the former coach. Quarterback Tommy Armstrong and offensive lineman Nick Gates stopped a bit longer to greet him.

Tenopir was diagnosed with leukemia in May of 2014. He knew something was wrong because he would become overly fatigued while working in the yard of his Lincoln home.

"I couldn't even plant a tomato plant," he said then. "It just kicks you in the butt."

Born and raised in Harvard, Tenopir graduated from Sterling College and started coaching in Haxtun, Colorado.

He is survived by his wife, Terri, and children Kim, Todd and Pamela, and stepchildren Dana and Daniel. He is also survived by brother Jim, who is the executive director of the Nebraska School Activities Association.

Photos: Milt Tenopir through the years

With strengthened bond, Cavanaugh eager for fall challenge with O-line

The question not asked, but probably should have been, How many burnt ends does it take to feed an entire offensive line?

Cavanaugh embraces Husker O-line past while building for future

“To me, my biggest message is always going to be, it’s not what they do (on defense), it’s what we do,” says Husker O-line coach Mike Cavanaugh.

Reactions from Nebraska players, present and past, and Husker coaches to Milt Tenopir's death on Monday.

An act of kindness never forgotten

After the 2014 news of former Husker offensive line coach Milt Tenopir's health issues, a letter arrived to the Journal Star providing a snaps…

Celebration of Milt's life set for Sunday at Memorial Stadium

A celebration of Milt Tenopir’s life will be held Sunday at Memorial Stadium from 4 to 6 p.m. on the third level of West Stadium.

Matt Hoskinson reeled off Milt Tenopir's qualities Tuesday, one after another, but one jumped out.

Former Husker assistant coach Milt Tenopir was remembered at a celebration of his life Sunday at Memorial Stadium.

A letter for Milt, written by his 'sons'

Milt Tenopir (center) holds the 1994 national championship trophy as the '94 Huskers have their own tunnel walk before the kickoff of the 2014 Miami game at Memorial Stadium.