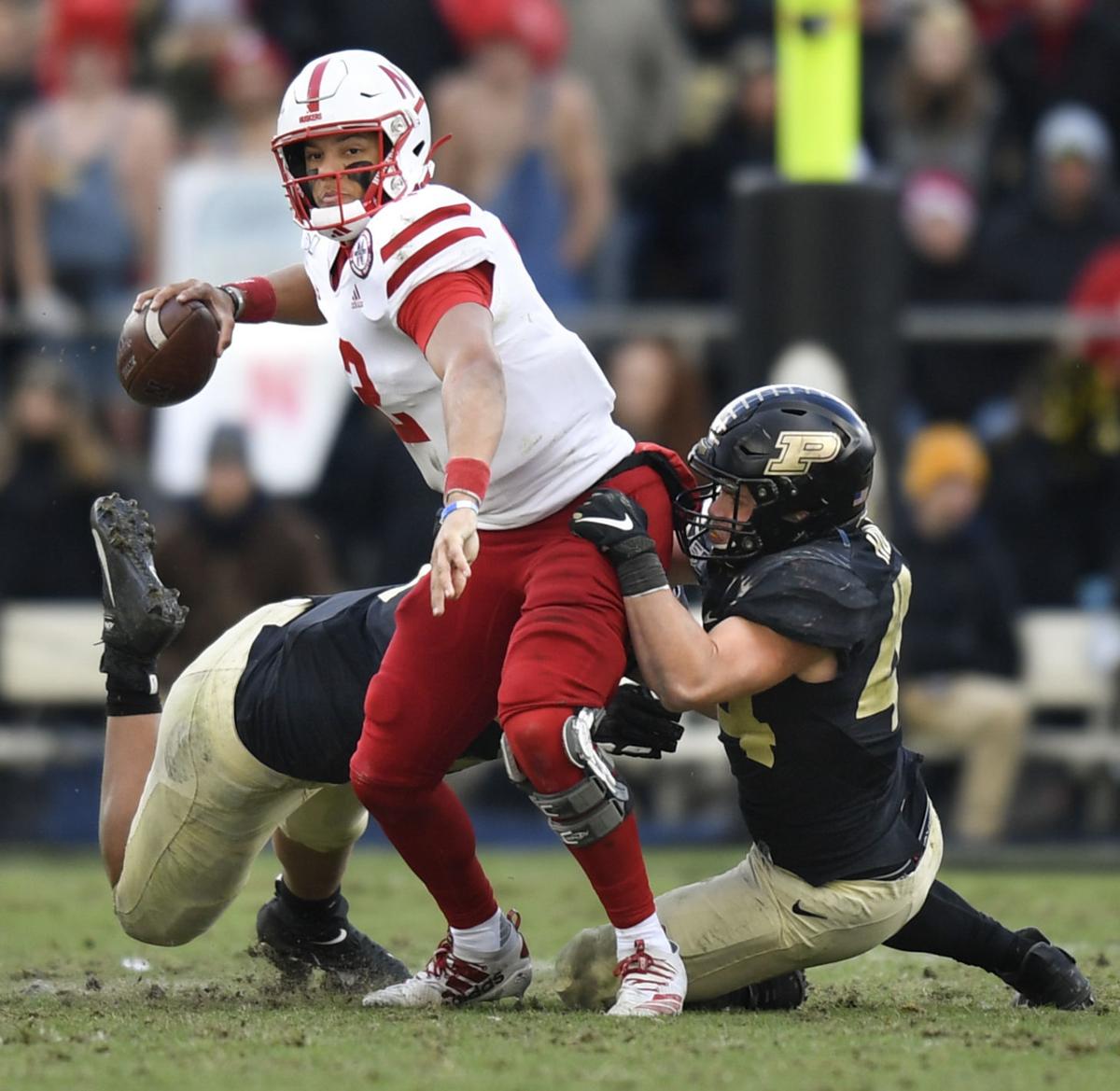 Nebraska quarterback Adrian Martinez (2) is tackled by Purdue defensive end Robert McWilliams III (94) and linebacker Ben Holt (44) in the second half on Saturday at Ross-Ade Stadium in West Lafayette, Ind. 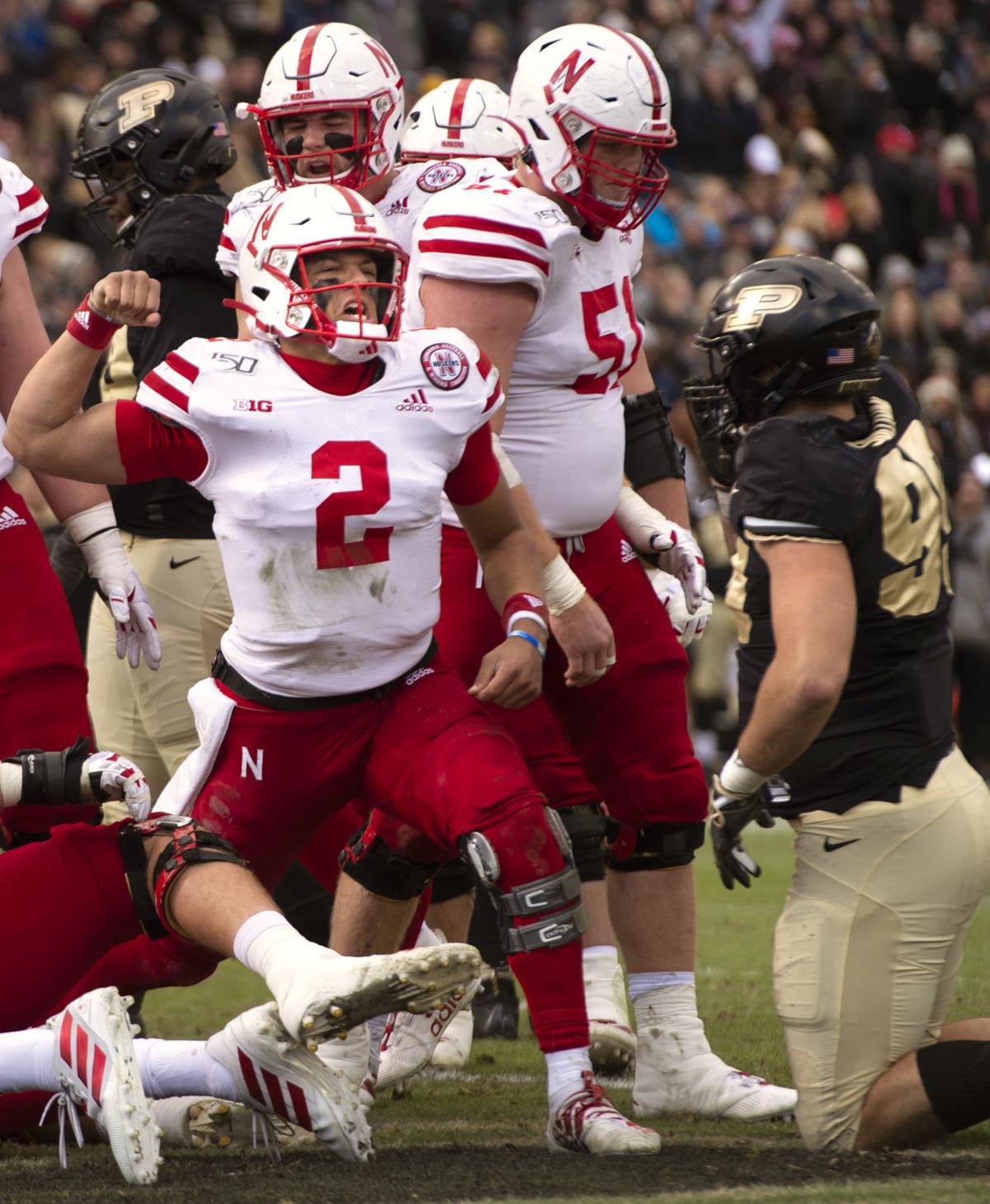 Nebraska quarterback Adrian Martinez (2) celebrates his first touchdown of the game against Purdue during the second half Nov. 2 at Ross-Ade Stadium in West Lafayette, Ind.

WEST LAFAYETTE, Ind. — Playing for the first time in a month after getting injured against Northwestern, missing the Minnesota game, rehabbing during the bye week, then not playing against Indiana, Adrian Martinez had his moments.

Both good and bad.

The sophomore quarterback threw for 247 yards but didn't have a touchdown and threw NU's first interception since Oct. 5 against Northwestern. He led Nebraska with 58 rushing yards, but also threw a pass into the ground and out of bounds that counted as a fumble.

He found JD Spielman for a 40-yard pitch-and-catch on Nebraska's first offensive play — and missed receivers who appeared to be open later on.

"I try not to think of the elements and I never want that to be a reason for my errant throws or missed throws. There’s no excuses," Martinez said after the game. "I made the correct read and the throw wasn’t delivered where it needed to be and that’s on me. I think the game could have started a lot differently if I executed my job better. That’s on me."

Martinez overshot a wide-open Kanawai Noa for what would have been a sure touchdown in the first half, and threw multiple passes to the perimeter into the ground.

Your Report Card: Nebraska at Purdue

In the fourth quarter, he threw behind an open Jack Stoll deep in Purdue territory, then responded with a 17-yard run one play later and ended the drive with a 2-yard touchdown plunge that put NU up 20-17.

“I felt good, I was excited to get back out there. I felt 100% healthy and was feeling good, ready to go," Martinez said. "There’s no excuse to missing some reads and throws early in the game. I felt like I was ready from the start.”

Martinez finished 22-for-39 through the air. The 39 pass attempts were Martinez's most this season while his 22 completions tied a season high.

"Adrian was great, as always. He played as well as he always does, and he was a great leader for us when we got down," receiver Kade Warner said. "He knew he was going to have to lead us back to victory and he did everything he could today. So I’m really proud of him."

But, oh, those misses. Martinez admitted he'd like to have a few back. A couple of times, when it looked like there was room to run, Martinez instead tried to force a throw. Twice the NU offense was bailed out by Purdue penalties and one ill-advised throw into the end zone was dropped by a Purdue defender.

Perhaps most importantly, Martinez appeared to come out of the game healthy. He was still sporting the brace on his left knee that he wore throughout practice, but he bulled for both of Nebraska's fourth-quarter touchdowns.

"I thought he played pretty good, actually," running back Dedrick Mills said. "Just got to make a few more throws and people got to catch the ball. It’s just as simple as that."

Game On: A closer look at how the Huskers and Boilermakers match up

Time to level up. Parker Gabriel breaks down Saturday's matchup between Nebraska and Purdue.

Steven M. Sipple grades the Huskers' performance against the Boilermakers.

WEST LAFAYETTE, Ind. — Lesley Dause knew where she wanted to be.

WEST LAFAYETTE, Ind. — There’s typically a simple recipe to win football games, and it calls for winning both the field position and turnover …

Steven M. Sipple: Whether it's Martinez or Vedral, offense needs big day for Huskers to prevail

Bottom line, this isn't a great matchup for Nebraska. Granted, Purdue is a wet noodle when it comes to running the ball. But the Boilermakers average 301.3 passing yards and possess enough weaponry to pose a major threat to the Huskers' leaky pass defense.

"We can be better": For Huskers, detail work begins in red zone, on conversion downs

In the moments after Nebraska blew a 17-point lead at Colorado and lost 34-31 in overtime back on Sept. 7, Husker coach Scott Frost made an ob…

WEST LAFAYETTE, Ind. — Freshman Wan’Dale Robinson had just made an excellent cut on a third-and-5 run to Nebraska’s left, picking up a first d…

As Purdue's offense made play after play against Nebraska during the critical late stages of Saturday's game, I scribbled something in my notebook that I thought was meaningful. But Ben Stille and Barrett Ruud's comments suggest it wasn't particularly meaningful.

Nebraska and Wisconsin won't know the official kickoff time of Nov. 16's matchup between the teams at Memorial Stadium until this weekend.

Redshirt freshman cornerback Braxton Clark made his first career start Saturday against Purdue and made a positive impression on an otherwise dull day for the Huskers.

Nebraska quarterback Adrian Martinez (2) is tackled by Purdue defensive end Robert McWilliams III (94) and linebacker Ben Holt (44) in the second half on Saturday at Ross-Ade Stadium in West Lafayette, Ind.

Nebraska quarterback Adrian Martinez (2) celebrates his first touchdown of the game against Purdue during the second half Nov. 2 at Ross-Ade Stadium in West Lafayette, Ind.