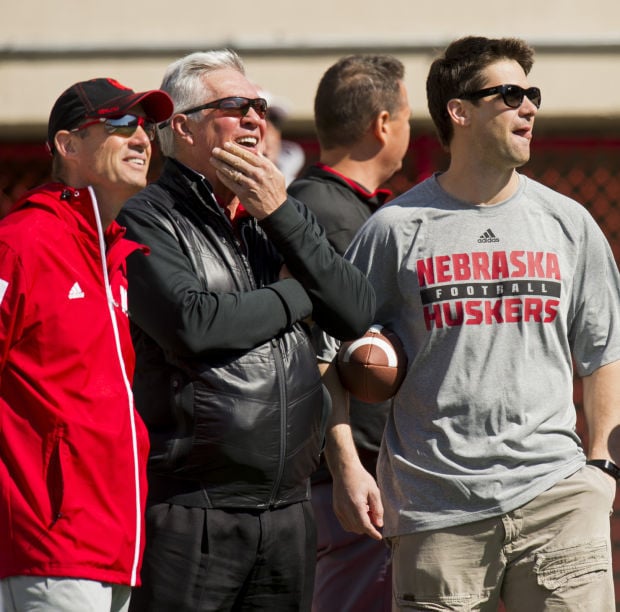 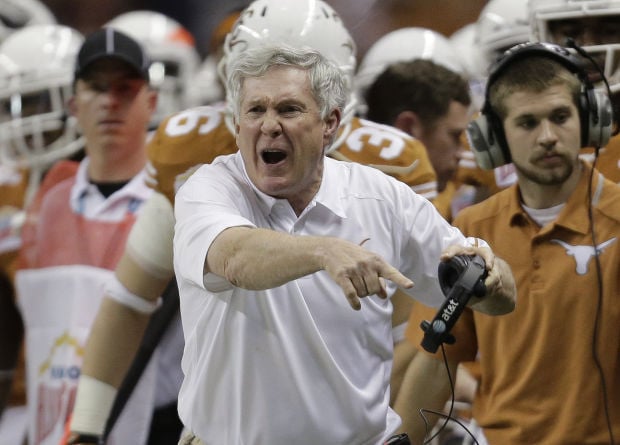 Texas coach Mack Brown argues a call during the Alamo Bowl against Oregon in 2013 in San Antonio. It was Brown's last game as Longhorn coach.

Allow the brain an extra second to process it. Yes, that’s Mack Brown speaking with a Husker logo as a backdrop. Yes, it is.

Now move on with rational thought, and accept that the man who used to coach Texas, and whose teams were always a bush of thorns to Nebraska, was in Lincoln this weekend and, dare it be whispered within these borders, plenty likable.

Like when he joked about how he started breaking out in hives during his tour of the Husker facilities, a tour that took him to the Ndamukong Suh Strength & Conditioning Center.

“I think I helped him build that,” Brown quipped. “Because, in the ’09 game, he knocked everybody out we had and that got that salary way up. So I think I really built that weight room more than people think I did.”

Or when talking about the 1998 game in Lincoln, a Longhorn upset spurred by Ricky Williams that ended Nebraska’s 47-game home winning streak.

“I told Ricky to put his helmet on and duck your head, because they’re probably not going to be nice, because nobody left the stadium,” Brown said. “And they started to chant, ‘Heisman, Heisman, Heisman.’ And Boyd Epley was standing on the sideline, and reached out and shook both our hands and said, ‘What a great game.’ I had such respect for Nebraska from that moment.”

Or when recalling the 1999 game in Austin, admitting that’s one win he doesn’t think his team should have had against Nebraska. The Huskers fumbled it away that day, losing 24-20, the only loss in what otherwise may have been a national championship season.

As Brown explained how Nebraska had the best team in the country that year, a voice from the back shouted “Amen!” It was former Husker secondary coach George Darlington. Brown took a break from the story and walked over to shake hands with Darlington. A few minutes later, Brown was asking someone to take a picture of him with Darlington and former Husker O-line coach Milt Tenopir.

They all were smiling.

As Brown talked to the media Saturday after delivering the keynote speech to about 450 local coaches at the Nebraska Coaches Clinic, what stood out above all else is the fact it's one of NU’s biggest former rivals who understands best what longtime friend Mike Riley is about to undertake as the Husker head man.

Now an analyst for ESPN/ABC, Brown recalled when he was being pursued for the Texas job, asking former longtime Longhorn coach Darrell Royal why he should take it.

"Because 22 million people care about what you do every day of your life," Royal told him.

Well, what's the down side? Brown asked. Why haven't you been consistent? Same answer. "Because 22 million people care about what you do every day of your life."

If you don't deal with that attention just right, it can overcome you. It's a challenge Brown knows Riley will face at a place such as Nebraska.

"Mike doesn't mind stopping and taking pictures and signing autographs," Brown said. "But like I had to do, he's going to have a balance there. He's going to have to get from here and there (and) you're not going to be rude, so sometimes you have to say, 'Send it to the office right now, I can't do it right now.' And you can't speak everywhere everybody wants you to speak. Because, like Texas, this state loves their coach. And the coach has got a powerful position here."

It's finding that right balance in a place where passion for the program is so high that Brown said he and Riley have talked the most about in their conversations.

Brown also doesn't sugarcoat the fact that whether you're at Texas or Nebraska, it comes down to winning.

“All of us have to win games,” Brown said. “Whether we like it or not, the graduation rates and all the things people are talking about now aren’t as important anymore as winning. Because we’re kind of into a semi-NFL model now. The top-tier teams, it’s about winning. It’s about filling stands and making enough money to pay for all the other sports.”

The on-field results for Riley at Nebraska will be determined soon enough. But from what Brown knows about the coach and Husker football, he sees a match.

He calls Riley one of the nicest guys around, but also said people need to understand Riley is tougher than people think.

"He's tough. He's disciplined. He's smart. I think we throw the word around too often probably, but he's as close to an offensive genius as you can be. Because I've seen him take a great running back and have him rush for 2,000 yards. I've seen him take a great quarterback and throw it all the time and have him throw it for 2,000 yards," Brown said.

"I think Mike is perfect for this place. He's so much like a Frank Solich and a Tom Osborne, because he's humble, he's smart, he's polite. But at the same time, he's going to do a good job coaching football."

A few minutes later, Brown was standing next to Riley at Memorial Stadium, watching practice.

Not a Big Red rival on this day. Just a friend.

The journey has been long and sometimes arduous for Nebraska receiver Jamal Turner, granted a medical redshirt season after he missed all but two games last season because of a torn Achilles tendon.

"What?!?" Mike Riley exclaimed it jokingly when asked after Saturday's practice about being a week from the Red-White scrimmage.

Practice No. 12: Taking it inside the stadium

With the Nebraska Coaches Clinic going on, the Huskers took their work inside Memorial Stadium for the first time this spring.

More at Life in the Red

News, tidbits and more from the Husker Extra team at the Life in the Red blog.

Texas coach Mack Brown argues a call during the Alamo Bowl against Oregon in 2013 in San Antonio. It was Brown's last game as Longhorn coach.