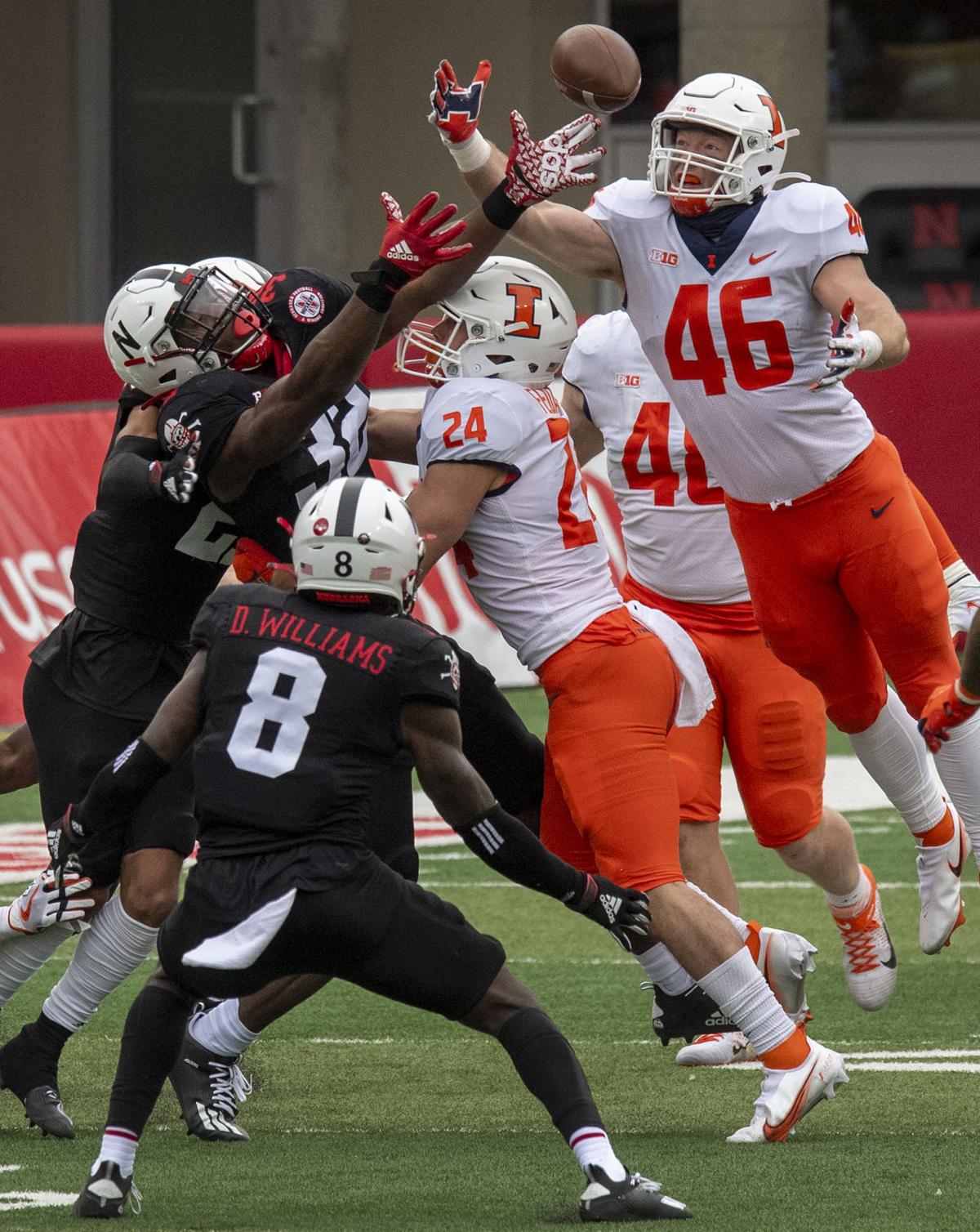 Illinois' Alec McEachern (46) and Nebraska's Niko Cooper (32) reach for a fumble on a kickoff return in the second quarter Nov. 21, 2020, at Memorial Stadium. 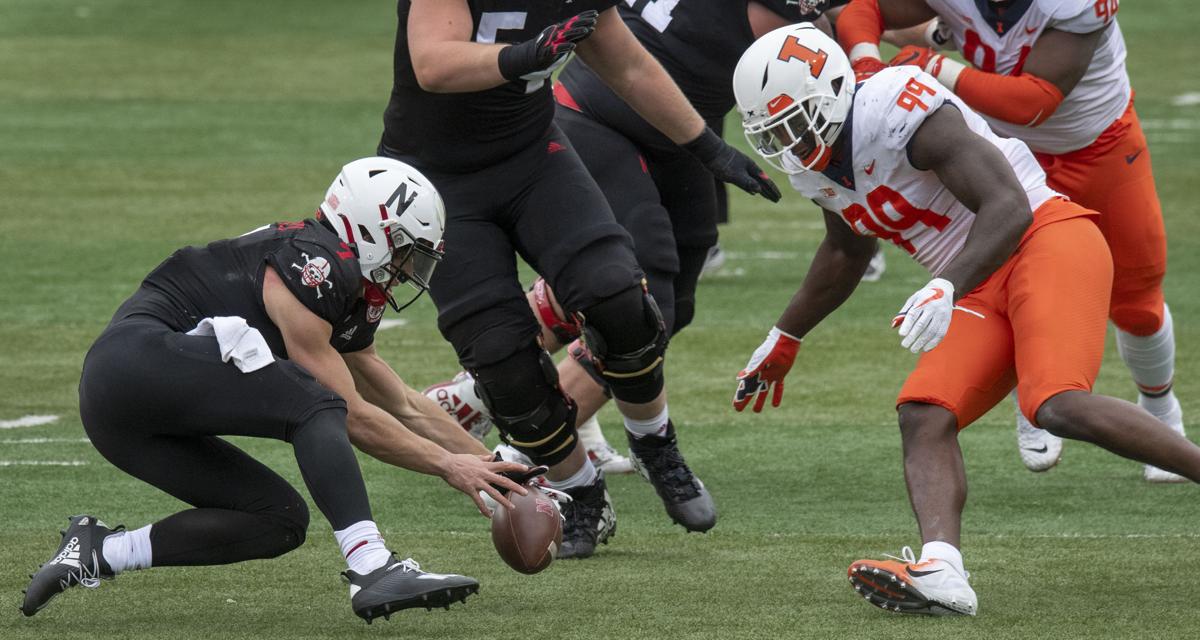 Nebraska quarterback Luke McCaffrey (7) chases after a bad snap along with Illinois' Owen Carney Jr. (99) in the second quarter Saturday at Memorial Stadium.

Can the Huskers make it two in a row? This afternoon marks the first game of the season Nebraska has been favored — the betting line has floated around 14 points all week.

Big Red fans are feeling good about their teams chances; in our Twitter poll, nearly 95% selected, "Huskers got this."

2:40 p.m. That'll do it. Illinois comes to Lincoln and beats Nebraska 41-23 at Memorial Stadium. The Huskers drop to 1-3 this season and will most certainly be scratching their heads after this one.

2:34 p.m. Adrian Martinez enters the game and takes Nebraska to the end zone, capped by a 4-yard pass to Levi Falck.

Illini lead 41-23 with just over two minutes left in the game.

2:26 p.m. Luke McCaffrey tries the deep ball — and he is intercepted. Nebraska's fifth turnover of the game.

2:00 p.m. Terrible moment at Memorial Stadium. Nebraska linebacker Collin Miller had to be carted off the field after a collision with an Illinois ball carrier.

Fellow ILBs Will Honas and Luke Reimer are kneeling together at the goal line, holding each others hands and looking at the ground as medical personnel prepares Miller for the stretcher. Just brutal.

There's a quarter to go yet in this one.
Illinois 38, Nebraska 17 #Huskers have four turnovers, have given up 428 yards and have allowed 8/12 third-down tries. Plus the fake punt.

Ugly doesn't begin to describe it.

1:44 p.m. The Huskers pick up a fourth down, but Wan'Dale Robinson fumbles, recovered by Illinois.

1:37 p.m. Nebraska's two-score deficit is short-lived. It's Illinois by 21 points after the visiting team sustains another long drive, finished off by Brandon Peters' 1-yard TD sneak.

1:22 p.m. Wan'Dale Robinson with Nebraska's play of the game. He takes a handoff and bobs, weaves and contorts himself 32 yards down the field to Illini 1-yard line. It really was an impressive play.

Then, Luke McCaffrey takes it from there, punching it in to trim Illinois' lead to 31-17.

1:13 p.m. Illinois tacks on a field goal via James McCourt's right leg. The drive was extended by a fake punt on fourth time. Perhaps more detrimental for the Huskers than three points is that Illinois ate up nearly seven minutes of time on that drive.

12:38 p.m. Huskers try to sneak in a score before halftime, but Luke McCaffrey is intercepted on a deep pass to Levi Falck. Just not clicking today for the redshirt freshman.

I'm no expert, but so far today, receivers getting open has not been the issue. Couple of drops, several instances of the ball not being delivered.

12:12 p.m. Nebraska drives the field, punches in a fourth-and-goal from the Illini 1-yard line, but the score is nixed by Cameron Jurgen's holding penalty. Huskers have to settle for a field goal, which Connor Culp drills from 30 yards to trim Illinois' lead to 21-10 with seven minutes left before halftime.

Penalties cropping up for the Huskers:

Four penalties for 41 yards so far for the #Huskers, including one that took a touchdown off the board and one that turned a third-and-15 for Illinois into a first down on a touchdown drive.

#Huskers force a three-and-out. Needed that.

11:56 a.m. Nebraska picks up a first down but the drive stalls from there. Two costly drops, especially Austin Allen's mishap on a second-down play that could have made for a more manageable third down.

Nebraska trails 21-7 with 13 minutes left in the first half.

11:37 a.m. Nebraska turns it over. No controversy on this one. Cam Jurgens' fourth-down snap sails over Luke McCaffrey's head, who scoops the ball and tries to make a play but his pass is intercepted. Leading 14-7, Illinois takes over on its own 35 with 2:32 left in the first quarter. It's worth noting McCaffrey had two errant passes on potential "chunk" plays for the Huskers, an area the group places plenty of emphasis on.

11:29 a.m. Back and forth we go. Illinois reclaims the lead on another Chase Brown rushing touchdown. His 35-yard run down to the Husker 2-yard line set up the score. Illini having success on the ground.

11:07 a.m. Tie game. The Huskers march down the field for the equalizer, punctuated by Luke McCaffrey's 5-yard run. 12 plays, 71 yards. NU ran the ball on the last six plays of that drive. Marvin Scott had four carries for 20 yards.

11:05 a.m. Well. 7-0 Illinois. Nebraska fumbles on its first play from scrimmage on what appeared to be an incomplete pass by Luke McCaffrey. The play, perhaps inexplicably, was not reviewed. Then, Illinois goes 21 yards on three plays, capped off by Chase Brown's 3-yard touchdown run.

One of the weirdest starts you'll see. Incomplete pass or fumble?

Is this a backward pass? pic.twitter.com/tEglSSJ4kk

11:01 a.m. Illinois wins the coin toss and elects to defer. Huskers to start with the rock. It's game time.

Game On: Storylines, players and matchups to watch (plus a prediction) for Huskers vs. Illinois

Luke McCaffrey is a 'ball of energy.' Now, can he put a charge into the Huskers' offense?

Held on the radio: Updates on the Huskers RB room, including the status of Sevion Morrison and Rahmir Johnson

A unique Husker gameday: What's it like to do public address to no public? Was that the band on the field?

For Nate Rohr, public addressing is, perhaps not surprisingly, a little bit odd when his booming voice reverberates more off empty metal bleachers.

Game On: Storylines, players and matchups to watch (plus a prediction) for Huskers vs. Illinois

Parker Gabriel takes a closer look at the Huskers and the Illini ahead of Saturday's game.

On Friday, Nebraska cracked the top five for a 2021 lineman out of Michigan and also picked up a walk-on from across state lines.

Some folks suggest Frost should simplify system for young players, but that would be dangerous in an outstanding coaching league.

Remember that rugged, season-opening four-game stretch on the schedule? That's in the past. So can the Huskers make a run?

Watching the game from home? Watch it with us. We're reacting to Huskers vs. Penn State live.

The Huskers are 0-4 when wearing the black jerseys. Maybe it's time for a proper burial of the alternate uniforms. Or a burning.

Steven M. Sipple weighs in with his report card from the Huskers' loss to Illinois.

Third-down woes on both sides contribute to NU's rough day

The Illini faced 17 third downs against the Blackshirts on Saturday. They converted 11 of them.

One way to shake off a stinging loss is to win the next game. All the better if it happens to be against a border rival. Watch the game with us.

Follow along live as the Huskers try to string together two wins in a row for the first time this season.

Illinois' Alec McEachern (46) and Nebraska's Niko Cooper (32) reach for a fumble on a kickoff return in the second quarter Nov. 21, 2020, at Memorial Stadium.

Nebraska quarterback Luke McCaffrey (7) chases after a bad snap along with Illinois' Owen Carney Jr. (99) in the second quarter Saturday at Memorial Stadium.