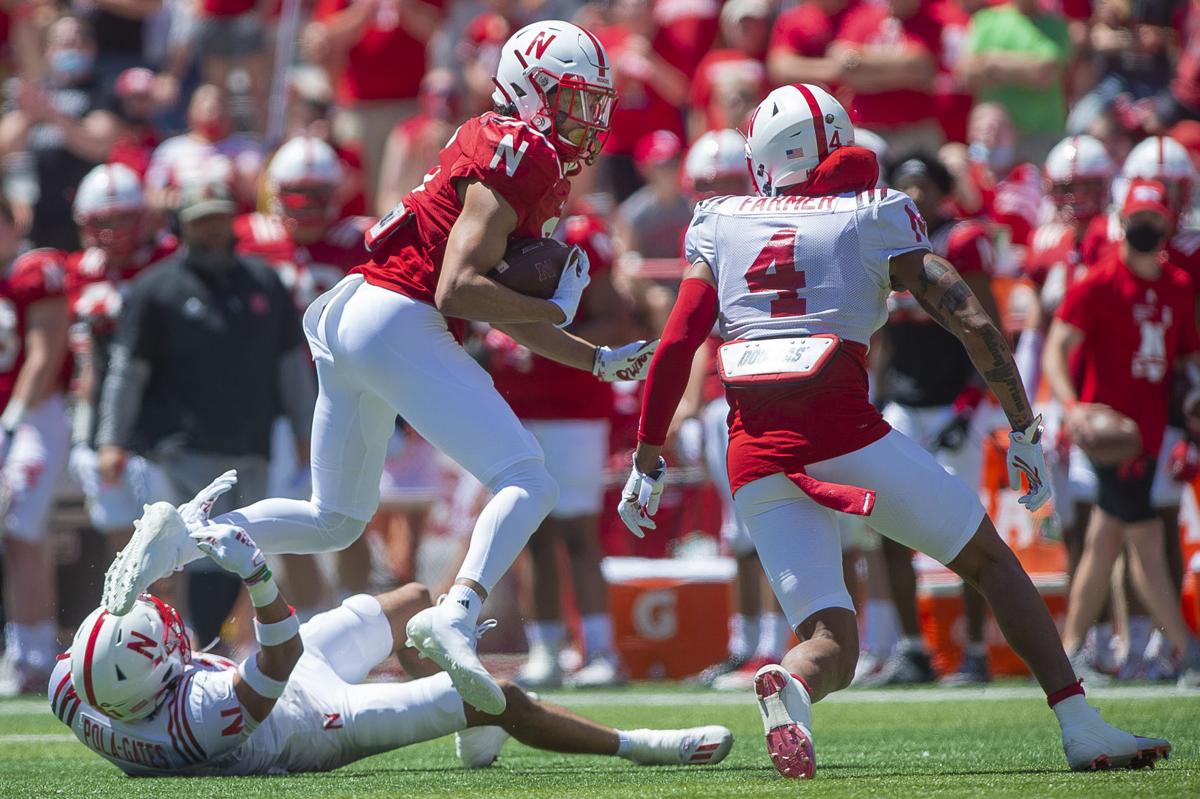 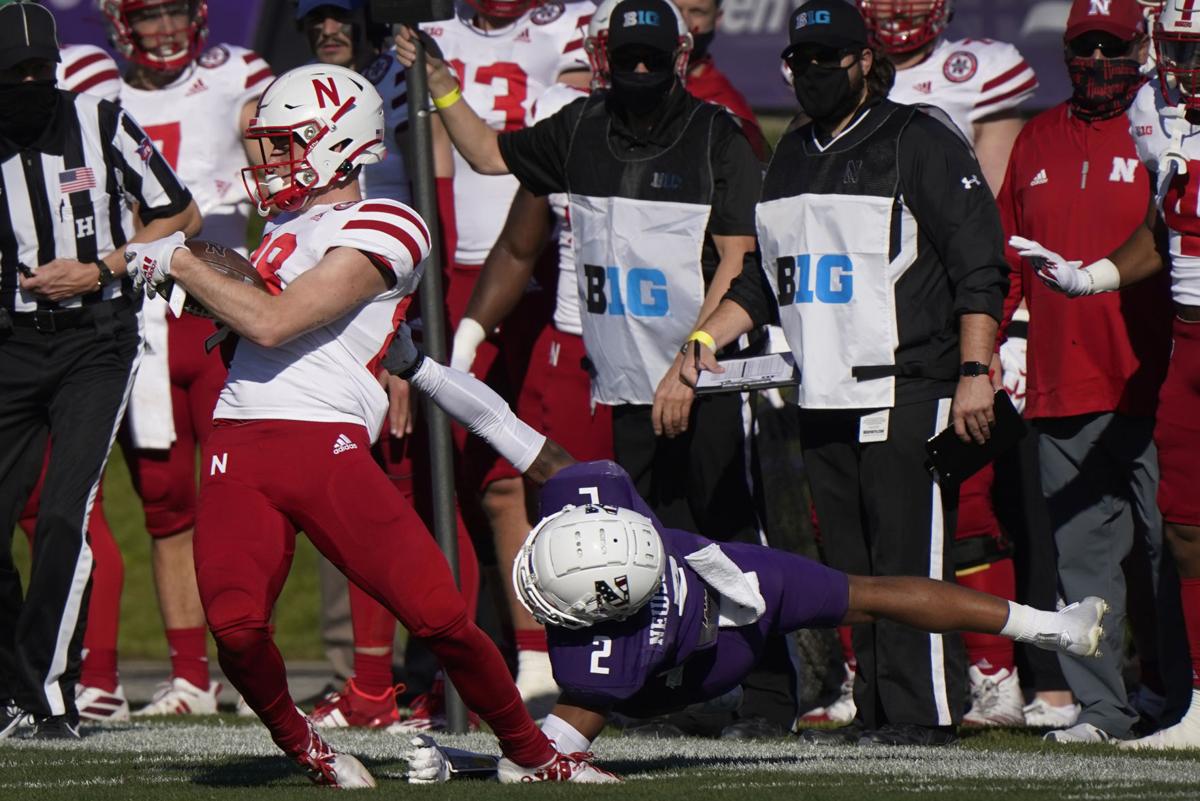 Nebraska wide receiver Levi Falck (left) is tackled by Northwestern defensive back Greg Newsome during a game on Nov. 7, 2020, in Evanston, Ill.

Perhaps no Nebraska skill position player’s route to playing time during the strange 2020 college football season better represents the challenges NU faced and the team’s overall struggle to generate production during a 3-5 season than Oliver Martin.

The Iowa transfer arrived on campus in August as a walk-on, did not learn he was eligible to play until November and then still managed to start four of the five games. Martin finished with five catches for 63 yards.

His story or Zavier Betts’ gradual ascension into a role player or Omar Manning’s one game played and one target or running back Marvin Scott’s brief time as Nebraska’s top running back option all highlight both the promise and the question marks that pervade the Huskers’ skill position groups as they prepare for the 2021 season.

Tight end is a known quantity for junior quarterback Adrian Martinez and the Nebraska coaching staff thanks to junior staples Austin Allen and Travis Vokoklek.

Receiver and running back? Entirely different story. Everybody hunkered down in Memorial Stadium this month preparing for Aug. 28 seems to believe Nebraska will be more dangerous this fall — maybe much more dangerous.

“Receiver is a spot where there’s going to be competition, and not necessarily because we don’t know who some of our lead guys are going to be, but a bunch of receivers get an opportunity to play and I want to find out who the best ones are,” NU coach Scott Frost said Thursday. “The depth and talent at that position is the best I’ve been since I’ve been at Nebraska.”

That sentiment, though, is based more on projection and practice than game production at Nebraska at this point.

The unknowns at running back are clear and well-trodden territory. Scott and Rahmir Johnson are the only two of the six scholarship backs to have logged carries for Nebraska, a combined 53 for 156 yards.

The receiver group, though, is not much more accomplished, at least as far as production at Nebraska. Frost hasn’t announced a scholarship for Martin yet, but he’s a safe bet this fall, so let’s call it 11 scholarship receivers for NU.

None of them appeared in a game for Nebraska before last year. Only Wyatt Liewer was even on the roster in 2019. Will Nixon, Samori Toure, Latrell Neville, Kamonte Grimes and Shawn Hardy have not yet played at all for Nebraska.

The other six combined last year for 31 catches and 379 yards.

Of course, that is still better than Nebraska’s situation last year, when it was tasked with preparing a bunch of first-year receivers and since-transferred Wan’Dale Robinson for duty in the midst of a pandemic. At least this group had some time together last year and a full, uninterrupted spring ball plus the summer to get to know each other.

“I think showing up and putting in the work is half the battle, so great turnout, make sure you show up and are focused on your route, depth, the timing and nailing all those things and solidifying that,” Martinez said of the summer work. “I feel like we definitely did that this offseason. There’s obviously still work to be done.”

Added Toure, “Spring ball was big when it came to chemistry and we made a lot of progress through there. It's definitely gotten better through the summer and the times we’ve thrown, and also specifically just in workouts. Me seeing him put in the work, him seeing us receivers put in the work, it just makes you closer. I think we’re in a good spot going into fall camp.”

Perhaps that’s why Martinez answered as he did on Thursday when asked if this felt like a new group of skill players.

“It’s funny you say that because it doesn’t feel, really, like a new group to me,” Martinez said. “I think we’ve done a great job of forming chemistry off the field that’s really helped the on-field transition come along a lot faster. We’ve also got a lot of work kind of on our own time. I think that’s definitely added to that fact.”

On Thursday, former Football Championship Subdivision transfers Toure and Falck were cast as being some of the leaders in the receiver group. Both are sixth-year seniors, but Falck just arrived last summer and Toure in January.

“I think we definitely did springboard from spring ball straight into summer conditioning,” Toure said. “From what I’ve been hearing, this was one of the best summers that we’ve had here in a long time. I think specifically the receiver group has made a lot of strides since spring ball. We’ve been pushing each other all summer and demanding more out of each other, and I think it’s going to show during the season. …

“We’re going to lift and do conditioning every day, but outside of that, you’re mainly working on footwork and catching footballs. We’ve been on the Jugs (machine) all summer, just catching up to 1,000 balls a day some of us. A lot of cone drills and a lot of Jugs.”

The game experience together will come later.

Asked what qualifies as success, Scott Frost said he's been asked that question "100 times." One by one, his players gave much blunter answers.

With his sixth season on deck, JoJo Domann ready to embrace role he saw others manage in 2016

How long has the linebacker from Colorado been around? He forced a fumble in the 2016 Music City Bowl. You know, when NU won nine games.

A loaded notebook for your fall camp eve perusal. We start with Frost on vaccine rates and move to an interesting position battle.

All-time Nebraska great Ahman Green, who retired from the NFL in 2009, coaches e-Sports at Lakeland University. But he feels a tug to coach football, and would come home to do it, he says.

The hardcore grind of August hasn't arrived yet. But the Huskers have some veteran defenders to help supply energy if needed. Find out who.

Preseason camp 'really fun' for Chinander, whose defense is past the basics and onto complex equations

Erik Chinander says it feels like the "groundwork" is already laid this fall, which is what the staff has been building towards since 2017.

Life in the Red: After playing 'as well as anybody' in spring, Husker LB Henrich off to fast start in camp

After listening to the defensive coordinator, it's time to crank up the conversation around the 6-foot-4 linebacker from Omaha Burke.

Chinander praises newcomers, but playing time may be hard to come by for young NU defenders

While a bunch of third-year redshirt freshmen will have big roles, the actual newcomers have a steep climb to try to find their way onto the field.

Nebraska wide receiver Levi Falck (left) is tackled by Northwestern defensive back Greg Newsome during a game on Nov. 7, 2020, in Evanston, Ill.