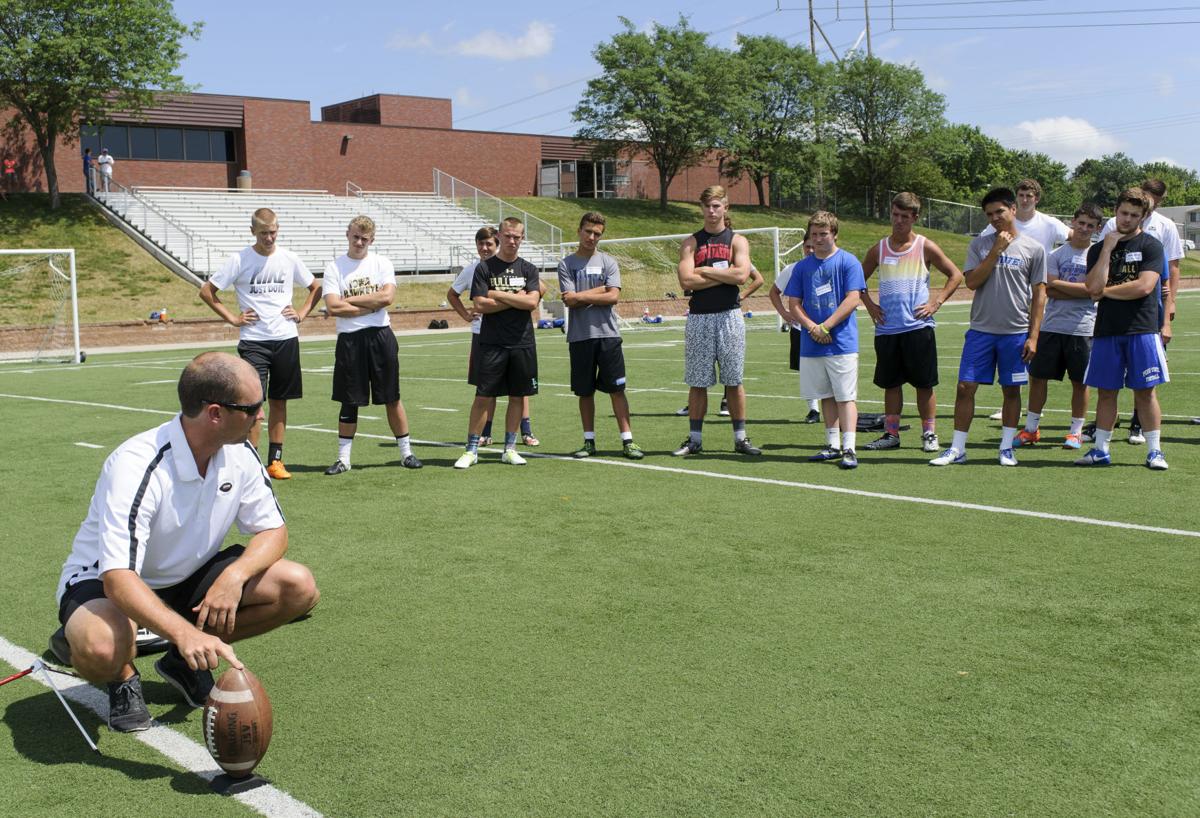 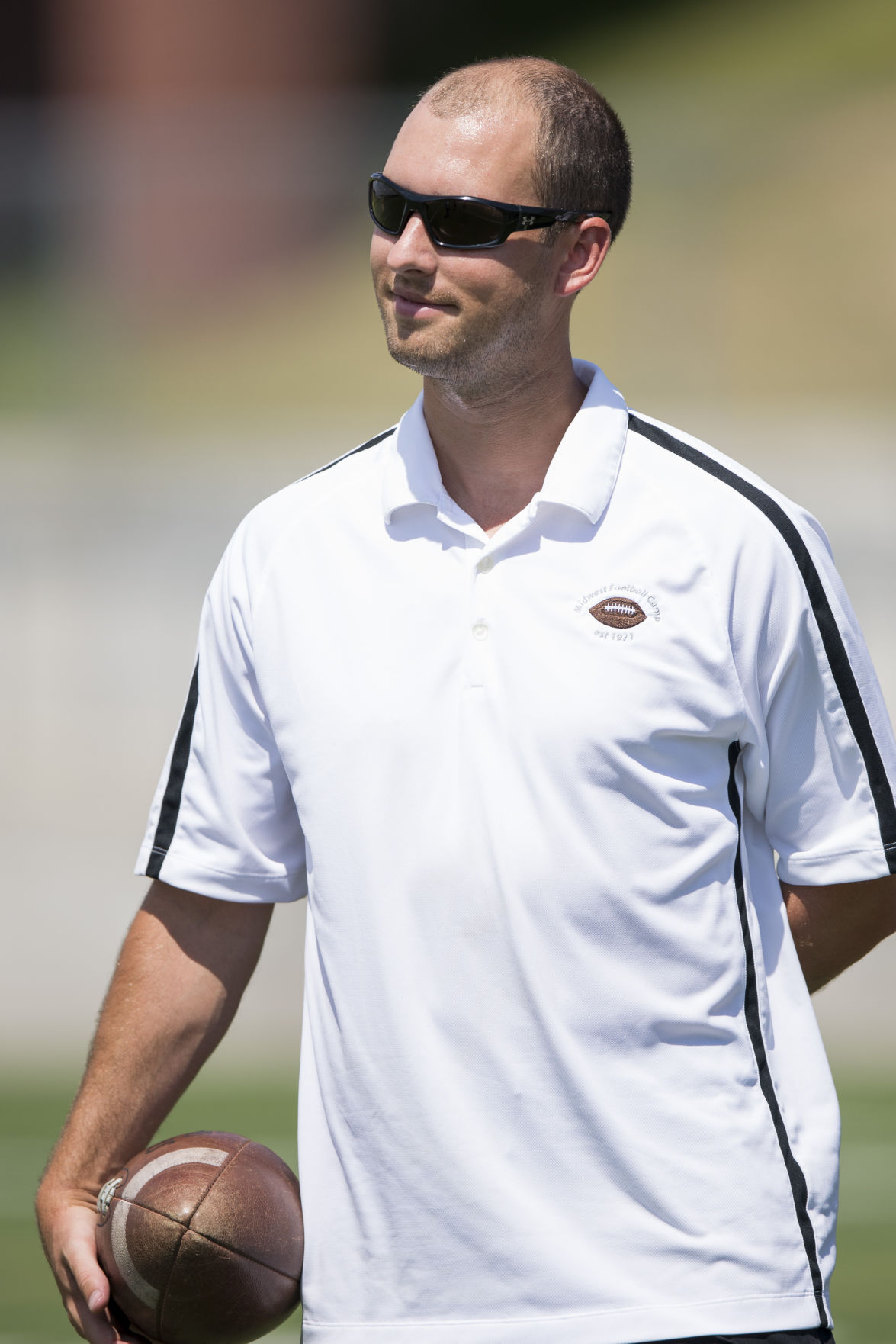 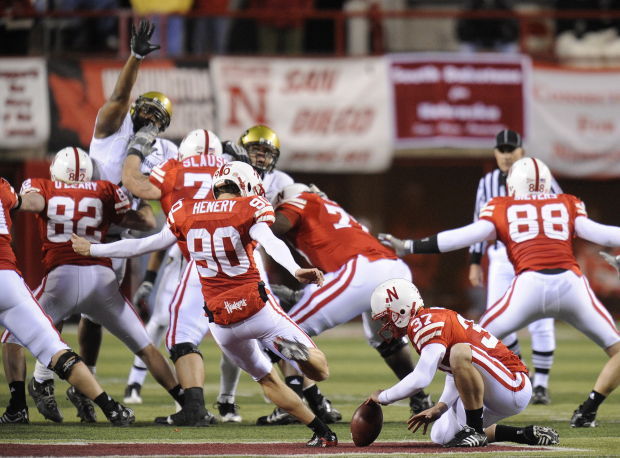 Alex Henery's 57-yard field goal against Colorado in 2008 remains one of the greatest moments in recent Memorial Stadium history. 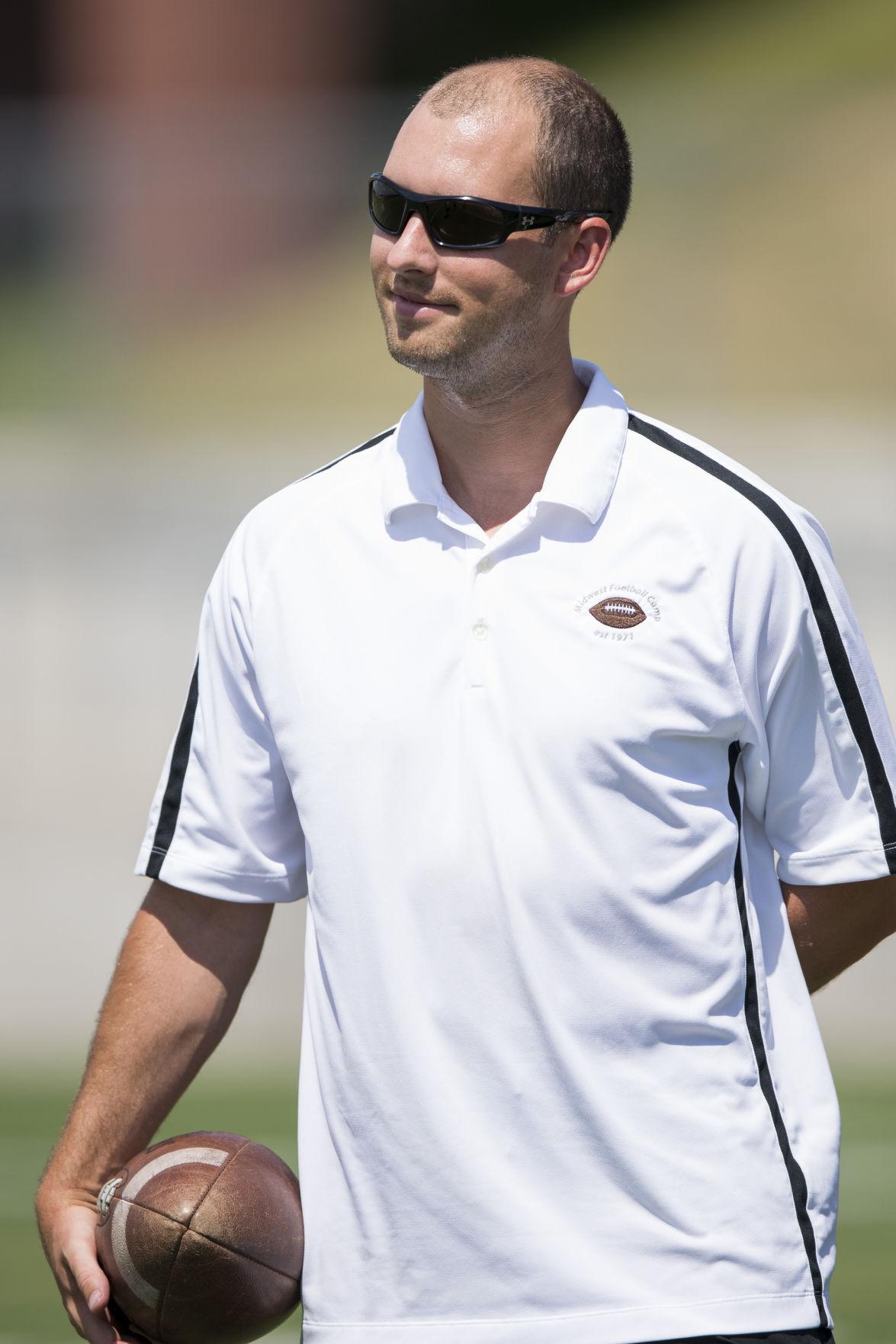 There will be no 57-yard attempt today. Not that Alex Henery minds if it comes up as he takes a seat on a bench at a local high school football field as the teenagers he's been teaching run to take a water break.

It's not constant, but still often enough that someone will approach him and mention the kick, the best kick in Nebraska football history outside of maybe that unplanned one that prompted a Matt Davison miracle catch.

"Yeah, I've lost a little hair so I'm hidden a little bit more. But I think that Colorado moment will live with me forever," Henery says. "It was a good time at Nebraska."

But time marches forward, still undefeated. You lose a little hair atop the head, the teams stop calling on the phone and one day you're in front of a classroom of sixth-graders, breaking the ice by asking, How many of you remember the kick?

"I think I got maybe five hands," Henery says. "I guess you could say I'm old now. The kids these days don't remember the moment."

He’s not old, really. He’s 28. And while some kids might not remember it, most adults do. Those who saw it in person remember it as one of the loudest sounds that ever came out of Memorial Stadium, the kind of earthquake that finds a football game when something you don't expect to happen actually happens.

Nebraska was toast. Down 31-30 to Colorado in the final regular-season game of 2008 to decide if the Huskers would play in a New Year's Day bowl game. Out of timeouts. Less than two minutes left. Bo Pelini asked a skinny sophomore kicker if he could make what would be the longest kick in school history.

Henery looked his coach in the eyes, a critical component in making Pelini think it could work. "I made it in warm-ups," the kicker told him.

He made it again. It cleared the crossbar by about 2 yards. Top it with a Big Suh rumbling pick six, and the party was on. Henery had just become a household name in the state. "It was a good kick, I guess," he said in the postgame while wearing an Omaha Burke T-shirt.

Eight years later, still not one for overstatements, he'll admit it was better than good. "It was a great kick in a pressure moment."

He'd go on to post what was then an NCAA record for accuracy, making 96.67 percent of his extra points and field goals during his career (Florida State's Roberto Aguayo just clipped the mark last year by finishing at 96.73).

"The career at Nebraska was kind of just like you're shooting and you can't miss," Henery says.

He still credits his long snappers, T.J. O’Leary and P.J. Mangieri, and his holders, Jake Wesch and Brett Maher. “We had a good thing going.”

He was drafted higher than most kickers could dream — fourth round by the Philadelphia Eagles.

That was in 2011. Used to him making any kick from anywhere, Husker fans no doubt assumed Henery would be kicking on Sundays for many years.

But as he sits on a bench at Papillion-La Vista High School during a summer kicking camp, he’s sure his pro kicking days are over.

"Yes, I'm pretty much, I'm done," he says. "I haven't received a call in over a year-and-a-half. You got to pick when you move on and I had a good opportunity come to me, so I've gone a different way now."

Things are plenty good. He's married, lives in West Omaha, has a 1½-year-old boy named Landen, a good job at the real estate company Tetrad Property Group. He instructs at a couple of kicking camps and even does some private lessons.

"It's great while it lasts and then once you're not in it anymore, it's hard to know when to pull the plug. When do you stop pursuing?" Henery says.

He has stopped waiting for the phone to buzz. It doesn't seem a sad story to him. Life moves on.

Still, you can't talk to Henery about kicking without also asking that one question, 'What happened?'

Scott Hale has about 30 teenage kickers circled around him and he's giving them the straight talk.

A kicker must be willing to take failure on his shoulders. Miss one and no one wants to hear about a bad snap or a bad hold, even if there was one.

A quarterback can make a bad throw on first down and still have two downs to make up for it, says Hale, who runs the Midwest Kicking camp that Henery used to attend as a teenager and now helps instruct twice a year.

"If you’re a kicker and you miss that 35-yarder at the end of the first half, you don’t get to go back out and try it again," Hale says. "You may not get another chance the rest of the game. It’s a tough spot to be in."

Henery knows how much one kick can affect everything. He had a couple of quality years with the Eagles. His field goal accuracy as a rookie even set an NFL record. He hit 87 percent his second year. But it dipped to 82 percent the next season. “And then I missed a kick in a playoff game.”

A 48-yarder. No piece of cake, but the kind of kick you are judged on. He missed a couple the next preseason. The Eagles picked out a new guy.

“My kickoffs weren’t as productive as I’d like,” he says. “That was probably the point that killed me the most. It’s the NFL. Every day you're competing. It’s just kind of how it goes."

Henery got another opportunity soon after with the Detroit Lions. But it lasted only a couple of weeks. He missed three kicks one Sunday and that was that. It was hard to fathom for Husker fans.

He says Detroit was tough because he arrived to the job out of rhythm. "But there's no excuses. I liked everywhere I was at. … Four years is more than I ever dreamed of getting when I started."

There are so many parts to kicking. For so long it all worked for Henery. But he never took it for granted.

"It's a lot like golf,” Henery says. “One day you can be great, the next day you can have some little thing that’s throwing you off.”

All the makes will be remembered far longer than a few misses. Those left an impact.

“There are kids around here saying, ‘Hey, if I really excel at this, I can earn a scholarship doing this. There’s a pathway here,’” Hale says.

Hale points to the one of the bigger kids on the field whom Henery is teaching. A kid from Burke, the same high school Henery attended. Cole Frahm is his name. He’s got potential.

Does Frahm remember Henery’s 57-yarder? You could say so. He wears No. 90 in high school because Alex wore it in college.

Talk about making a mark.

"He was the reason I got into kicking," Frahm says. "I was sitting in my parents’ bedroom thinking, ‘No way.’ Then he drills it. I'm like, ‘That's pretty good. Maybe I might be able to do that.'"

The three hours when the collisions take place can be the most peaceful for Andy Vaughn. From the time the ball is placed on the tee until tha…

Fresh off a workout on a Friday morning in June, the daily trip to the scale having just revealed him to be 14 pounds less than his playing we…

When Robert Porcher IV arrived back home in Orlando, Florida, this past weekend, he found his thoughts for the next couple of days still cente…

Former Huskers back in Lincoln for alumni camping experience

They came out one-by-one for what was a reunion of sorts, jogging through a line of kids with hands extended for high-fives.

There was just something about being on that field, dropping back and planting his feet on that painted red "N," firing spirals into the arms …

Chasing NFL success, Abdullah enjoys Nebraskans treating him as 'one of their own'

Ameer Abdullah gets a kick out of it, really.

The turnovers always are brought up first when it comes to that Black Friday game, and that's only right, since Nebraska had four and Iowa had none.

Alex Henery's 57-yard field goal against Colorado in 2008 remains one of the greatest moments in recent Memorial Stadium history.