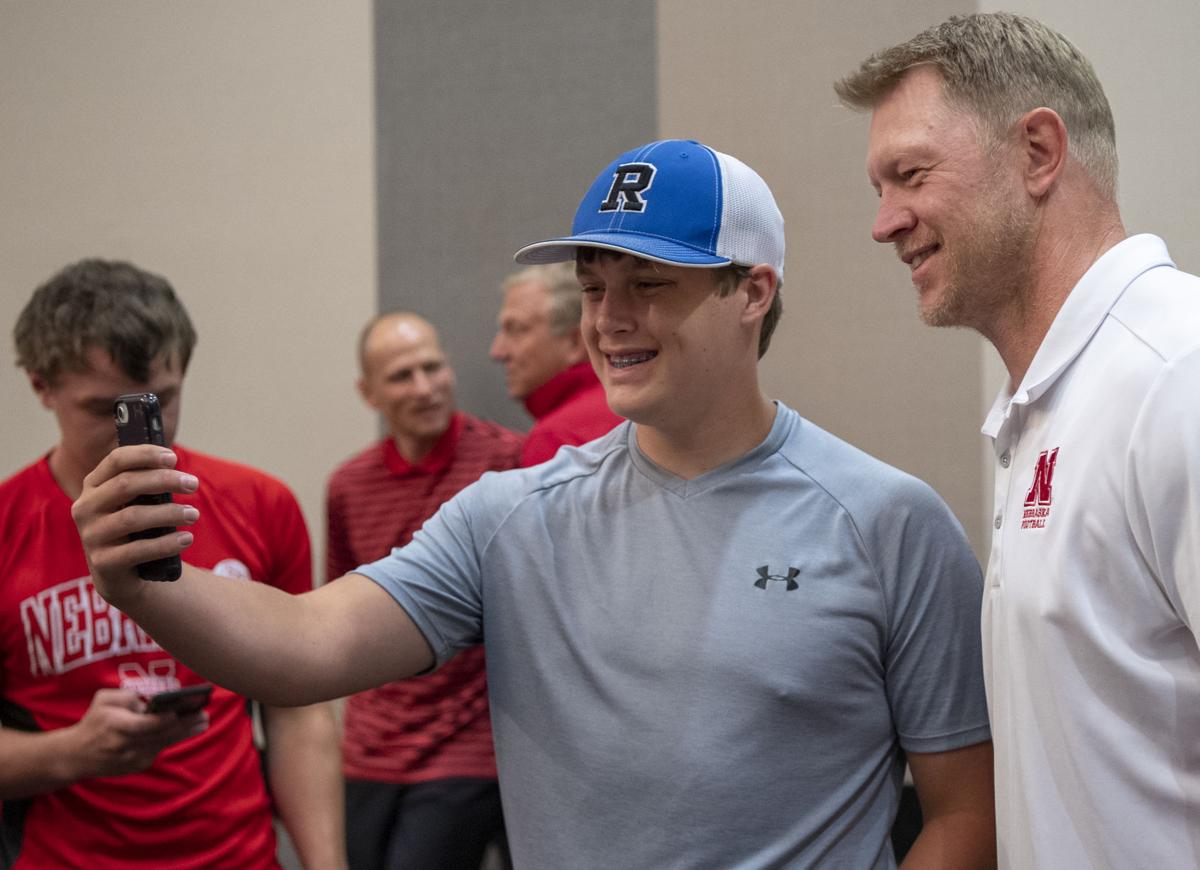 Nebraska football coach Scott Frost (right) poses for a selfie on Wednesday during the the annual Big Red Blitz at the Younes Conference Center South in Kearney. 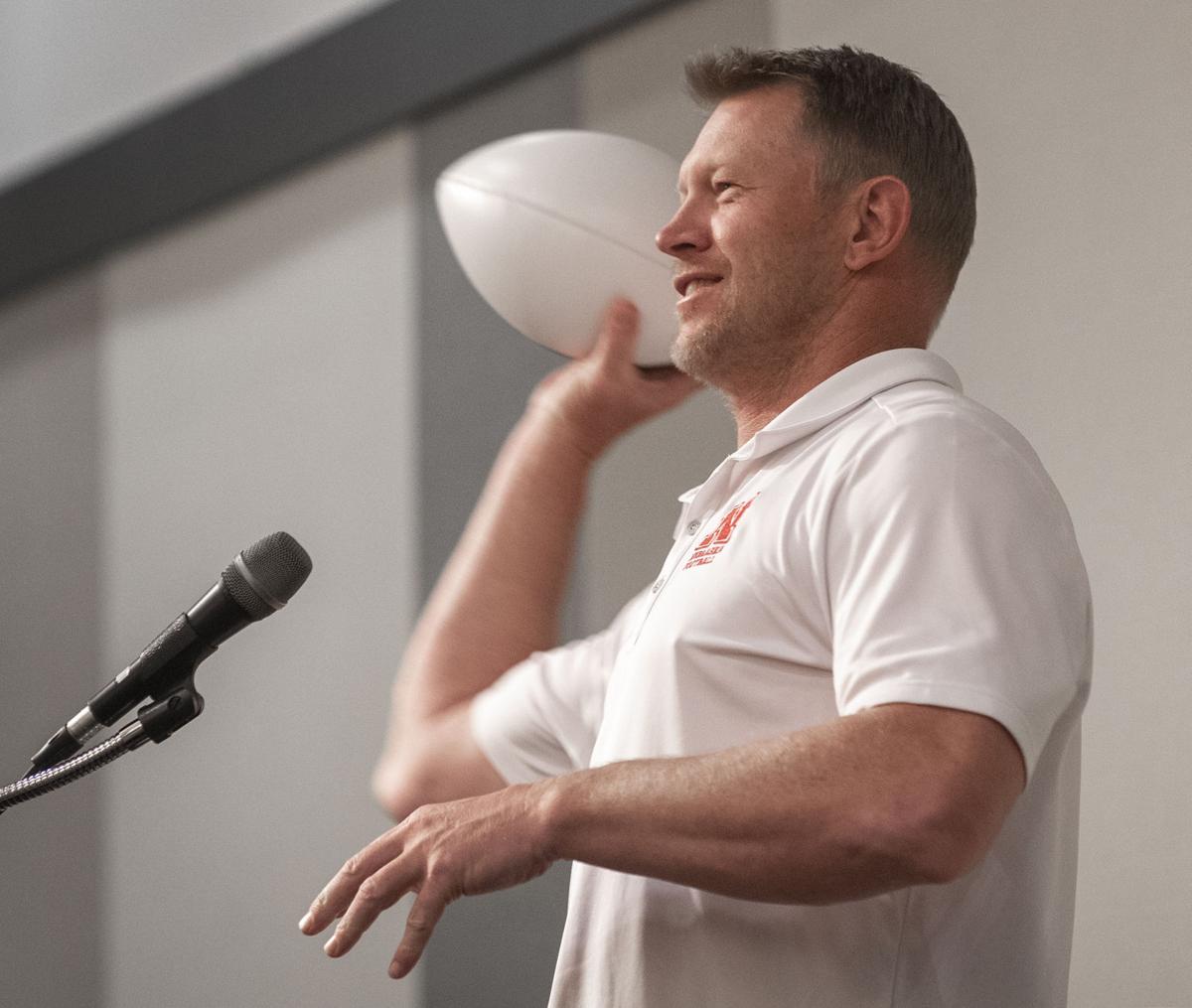 Nebraska football coach Scott Frost tosses an autographed ball to attendee who asked a question he liked on Wednesday during the the annual Big Red Blitz at the Younes Conference Center South.

A young guy in the unofficial crowd of 121 in the gym at North Platte Community College — count provided by Frost himself while he waited to take the microphone — impressed the Nebraska coach by knowing a "Top Gun" reference despite not being born until 18 years after the movie came out.

Frost wound up and sent an autographed ball in his direction, but it slipped and came up short. To be fair, the ball was a smooth white rather than pebbled leather, but even so, the flutter ball drew a laugh.

“That’s why I played defensive back in the NFL,” Frost said with a smile.

Relishing the chance to talk with a smaller group, Frost decided on a game with the audience. The rules were simple: He asked the crowd a question and then someone in the crowd would return one.

Topics ranged from Maverick and Goose and "North Dallas Forty" to a survey of whether it was him or Eric Crouch who prompted the purchase of the No. 7 jerseys in the crowd. Frost was impressed by a guy who longboarded to the gym and was headed back the same way in 100-degree heat. The coach knew a former boyfriend from Wood River of somebody in the crowd — “I don’t know if that deserves a prize or a lifetime of shame,” he cracked about dating someone from his former home — but also figured anybody from there knows 90% of everybody else.

Frost’s public appearances aren’t usually like this, laid back and informal and full of laughs, but he seemed to enjoy it. All 121 — or just about all of them — lined up for autographs and photos afterward.

The fourth-year Nebraska coach arrived here not in summer relaxation mode, though, but rather in the midst of one of the busiest stretches of the college football calendar in recent memory.

That, of course, is because the NCAA lifted a year-plus dead period beginning on June 1 and official visitors, unofficial visitors and campers have been on campus in Lincoln nearly every day since.

One day before Frost came out this way, Nebraska hosted 2023 in-state prospect Maverick Noonan on an unofficial visit. A couple of days before that, six official visitors. Just before that? A big set of players working out for the staff in hopes of earning scholarship offers.

The balance, though, is that for as busy as June is, Nebraska is trending toward a smaller scholarship recruiting class in 2022. Perhaps as small as 15 scholarship players, Frost confirmed to the Journal Star on Wednesday.

“It’s a huge challenge. I’ve been pouring over it for months now and everything changes," Frost said. "Juniors become sophomores and sophomores become freshmen. The one positive thing is the majority of our team is freshmen and sophomores. Vast, vast majorities. Because of that, I think we’re going to end up signing a smaller class this year and probably a smaller class next year, too. That’s bad, but the good of it is that I really believe with the talent we have in the program, we have what we need to win right now with those guys and we’re going to get the chance to work with that group for a long time and go to battle with those guys for a long time.

“There’s a coaching saying, ‘Get old and stay old,’ and we haven’t been old since we’ve been here, but we’ve got a lot of experienced guys coming back and they’re going to get more and more experience and we’re going to play with the same guys for a long time.”

In the meantime, though, Nebraska has four players committed for the 2022 class and won’t aim to take more than somewhere in the mid-teens until it has a clearer picture later this fall.

“There’s going to be attrition here and there, some that you want and some that you might not," Frost said. "We’re still kind of waiting to hear how the rules fall. If we have super seniors (in 2022), do they count against our 85 or not, and I’m not completely sure of that answer right now, so it’s kind of a floating number right now.

“The key is, we’re not going to take anybody unless we think they can help our football team. We’ll be a lot more selective this year. Coaching isn’t about winning signing day, and we’re certainly not going to win signing day with a smaller class, but we just have to make sure the pieces we get are going to fit with what we have and make us better.”

June’s been a long and grinding month for Frost, his staff and coaches around the country, to say nothing of the high school athletes and parents who have traipsed all over. Frost, though, thinks the ability to work players out on campus for up to an hour during unofficial visits has helped.

"Getting kids to Lincoln is the best thing we can do," Frost said. "We have a great chance if we can get them here, so we’re playing catch-up a little bit. It’s great to be able to evaluate a little bit. These kids are getting pulled in every direction. Everybody wants to see them work out, so being out in the plains a little bit by ourselves, it’s a little harder to get kids here than some other places that are closer to other places. There’s still challenges to it, but it’s definitely helped. It’s probably a good thing we’re signing a smaller class this year."

Roster getting healthy: Frost said every player on the roster at this point is trending toward being healthy for the beginning of the season except for senior inside linebacker Will Honas and likely freshman tight end Thomas Fidone, both of whom suffered serious knee injuries during spring ball.

That includes USC transfer Markese Stepp, who missed most of spring ball after the NU staff discovered a foot injury that had limited Stepp dating back to his days with the Trojans.

“He looked good in a couple spring practices and we found out what was really wrong with his foot,” Frost said. “We got it fixed and we expect him to be back for the beginning of fall camp.”

Frost talks transfers: NU, like every school in the country, has seen plenty of players transfer this offseason. The two highest profile examples, of course, are wide receiver Wan'Dale Robinson (Kentucky) and quarterback Luke McCaffrey, who went to Louisville this summer but left there and ended up at Rice.

On the flip side, Frost praised the work FCS transfers Chris Kolarevic (Northern Iowa) and Samori Toure (Montana) have done since arriving in Lincoln. Frost could not talk about Ohio State transfer defensive back Tyreke Johnson as of Wednesday morning because his status in the program had not been formalized. He is expected to arrive on campus in the next few weeks.

There was some minor shuffling (see: Dublin) and some rumors (see: Oklahoma), but here's the 2021 Husker football schedule, as it currently stands.

New Nebraska defensive back Tyreke Johnson explains what sold him on Nebraska, how difficult it was to leave Ohio State and more.

Pierson-El returned three punts for touchdowns in 2014 at Nebraska.

He is the third 2022 commit this month, following tight end Chase Androff and quarterback Richard Torres.

A look at what Nebraska is getting in newly minted Class of 2022 verbal pledge RB Ashton Hayes (Reno, Nevada).

Nebraska defensive coordinator Erik Chinander said it’s been great to be able to have players come in for workouts in Lincoln.

Nebraska football coach Scott Frost (right) poses for a selfie on Wednesday during the the annual Big Red Blitz at the Younes Conference Center South in Kearney.

Nebraska football coach Scott Frost tosses an autographed ball to attendee who asked a question he liked on Wednesday during the the annual Big Red Blitz at the Younes Conference Center South.