But standing inside Memorial Stadium, the structure where Alberts made his name known to the state of Nebraska, many feelings came back for the Butkus Award winner.

"I love this place," Alberts said as he stopped to collect his emotions. "I love the University of Nebraska. I learned so much as a young man.

"I don't take this responsibility lightly. I will do everything I can to work as hard as I can for this place."

Once in awe as a teenager living in Cedar Falls, Iowa, that Nebraska would even consider offering him a football scholarship, Alberts is returning to Lincoln to lead Nebraska Athletics.

How do you grade Nebraska's hire of Trev Alberts as athletic director?

With his family by his side, and coaches and his mentor there too, Alberts was introduced as NU's 14th athletic director Wednesday. He'll officially begin Monday after leading the University of Nebraska at Omaha athletic department for 12 years. Alberts' base salary will be $800,000.

"I would have never left UNO for any other job but Nebraska," he later added.

Alberts replaces Bill Moos, who announced his abrupt retirement on June 25. Chancellor Ronnie Green, who led the search for Moos' replacement, said Nebraska looked at national and internal candidates — about 25 of them, including eight lead candidates.

But Alberts was at the top. He checks all the boxes, Green said.

The search: How Nebraska whittled down a list of 25 candidates, with help from current players and coaches

The overview: The Trev Alberts story

The reaction: What are people saying about the hire at a local and national level?

The timeline: From Blackshirt to Nebraska AD

"Trev knows what it means to put everything you've got into competition and to succeed at the highest levels. He's first and foremost student athlete-focused," Green said. "He's a game-changer. He appreciates the big changes that are undergoing right now in college athletics."

At the forefront of those changes are name, image and likeness, which began on July 1. Alberts will oversee a department that just moved its radio network and multimedia rights in-house and is in the middle of a $150 million facility upgrade.

"Trev is dedicated to putting in the hard work to ensure that we are competitive five years, 10 years, 20 years from now in Husker Athletics," Green said. "The longevity of that commitment is important (and) our future is bright. We have the right people in the right places."

The last time fans saw Alberts representing Husker red, he was chasing down quarterbacks as one of the nation's top linebackers in the early 1990s. He was the first Butkus Award winner in NU football history, the Big Eight defensive MVP and the 1993-94 Big Eight male athlete of the year.

After a short NFL career riddled by injuries and a run as a college football television analyst, including a stop at ESPN, Alberts returned to Nebraska in 2009 to lead Omaha's athletic department.

Alberts said when he played football he had no inclination to be an athletic director. But advice from Tom Osborne, who coached Alberts, put him on a different path after the TV gig was proving to be tough on a family with young kids.

"He said, 'In my experience, a life of service will be far more rewarding and fulfilling in the end,'" Alberts recalled.

His tenure at Omaha did not go without controversy. Less than two years after taking the job, Alberts spearheaded UNO's move to Division I, but it came at a cost. The Mavericks eliminated their football and national championship wrestling programs.

Under Alberts' watch, Omaha added a state-of-the-art facility in Baxter Arena, and the school opened the gates to a new baseball/softball complex, which was 100% funded by donors, this past spring.

Alberts was instrumental in securing $100 million of private and corporate funding for Omaha athletics, the school said Wednesday.

"We worked through complex financial challenges and (I) was frankly given a master's degree in business over a 12-year period that I could never repay them for," Alberts said.

The challenges and successes at Omaha prepared Alberts for his next role, he said. And though he had paid attention to what was going on down I-80, Alberts said it was very important that he give Omaha athletics his full focus.

He was all set to keep it going, too, but then Moos stepped down, and Alberts liked the pitch he heard from Green and NU system President Ted Carter.

Carter called Wednesday not only a great day for Husker Athletics, but a great day for the state of Nebraska. He emphasized the importance of the moment, calling it a "remarkable point."

Alberts was relentless in how he played football at Nebraska, becoming one of the greatest linebackers to don the "N" helmet. NU leaders are encouraging him to bring the same approach nearly 30 years later as athletic director.

In a wild day, one thing was clear: Moos is going to miss Nebraska — no "apparently" needed. The rest of Husker Nation is left holding on for the ride.

A look back at Trev Alberts' career, from signing to play at NU in 1989 to returning Wednesday as the Huskers' next AD.

Trev Alberts is the new AD at Nebraska. Reaction from the state and nation

From astronauts to politicians to national writers, here's a sweep through social media for reaction on Nebraska's hiring of a new AD.

Introductory news conferences for major hires have become old hat for Nebraska fans in recent years. Then along came the former Husker great.

A native of Suwanee, Georgia, Quinton Newsome emerged in the spring as the top corner opposite returning starter Cam Taylor-Britt.

What had Will Bolt 'nodding my head' during Trev Alberts' speech; Fred Hoiberg reacts, too

As for what the Husker baseball coach liked? For starters, the "no-excuses" part of it. 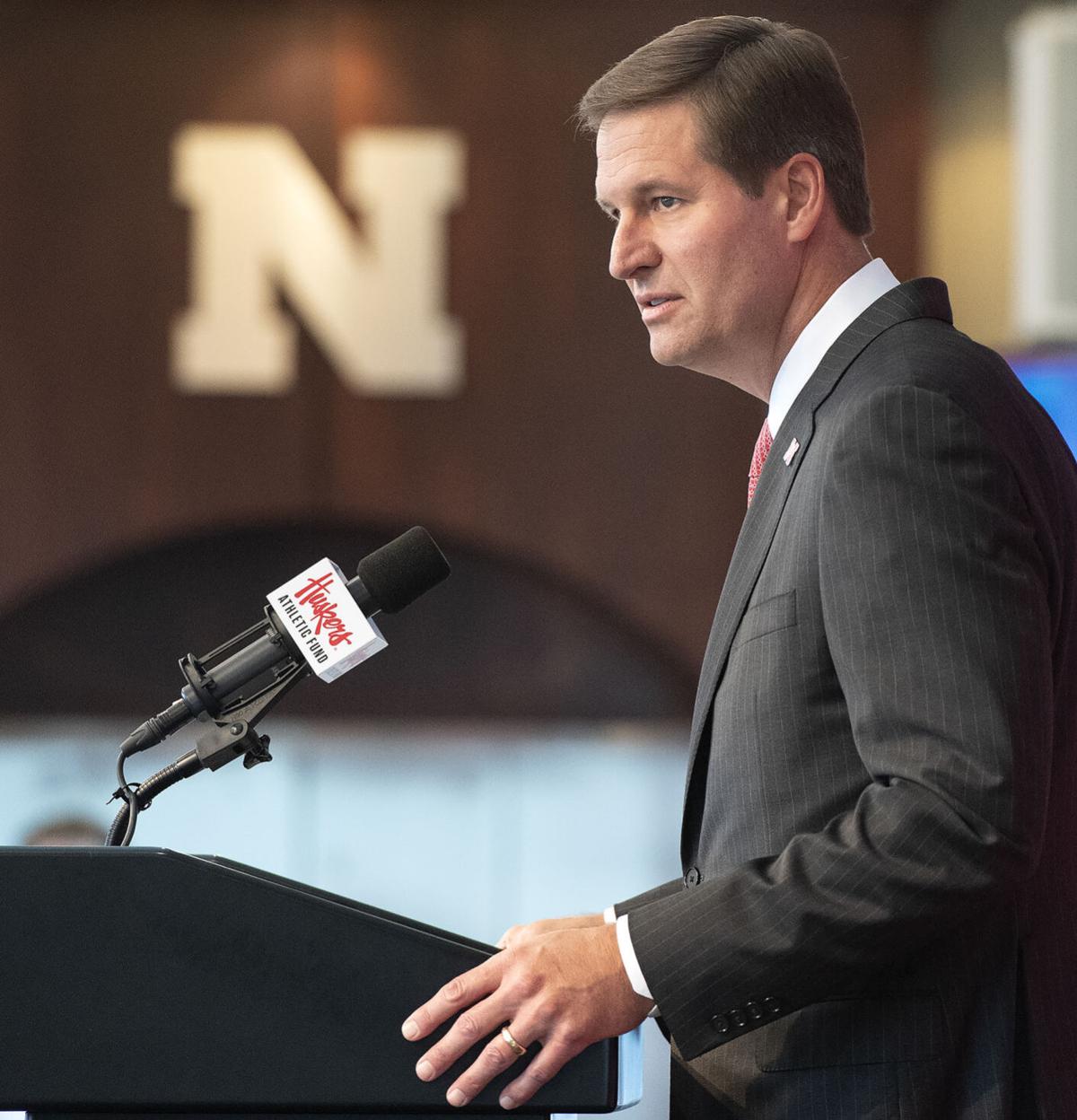 Nebraska athletic director Trev Alberts, shown here during his introductory news conference, has a five-year contract that can top $1 million annually with bonuses. 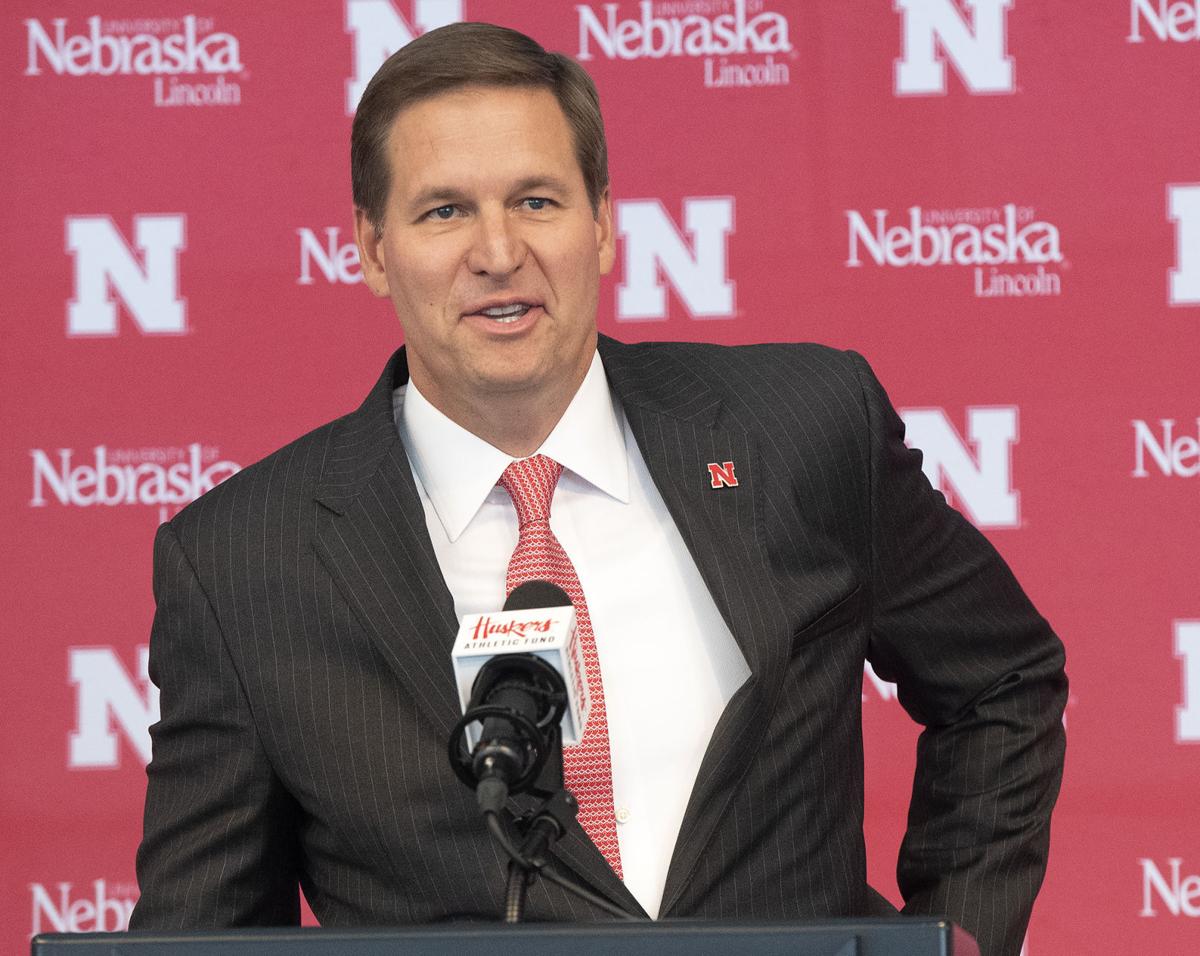 Nebraska introduces Trev Alberts as its athletic director during a news conference July 14 at Memorial Stadium.