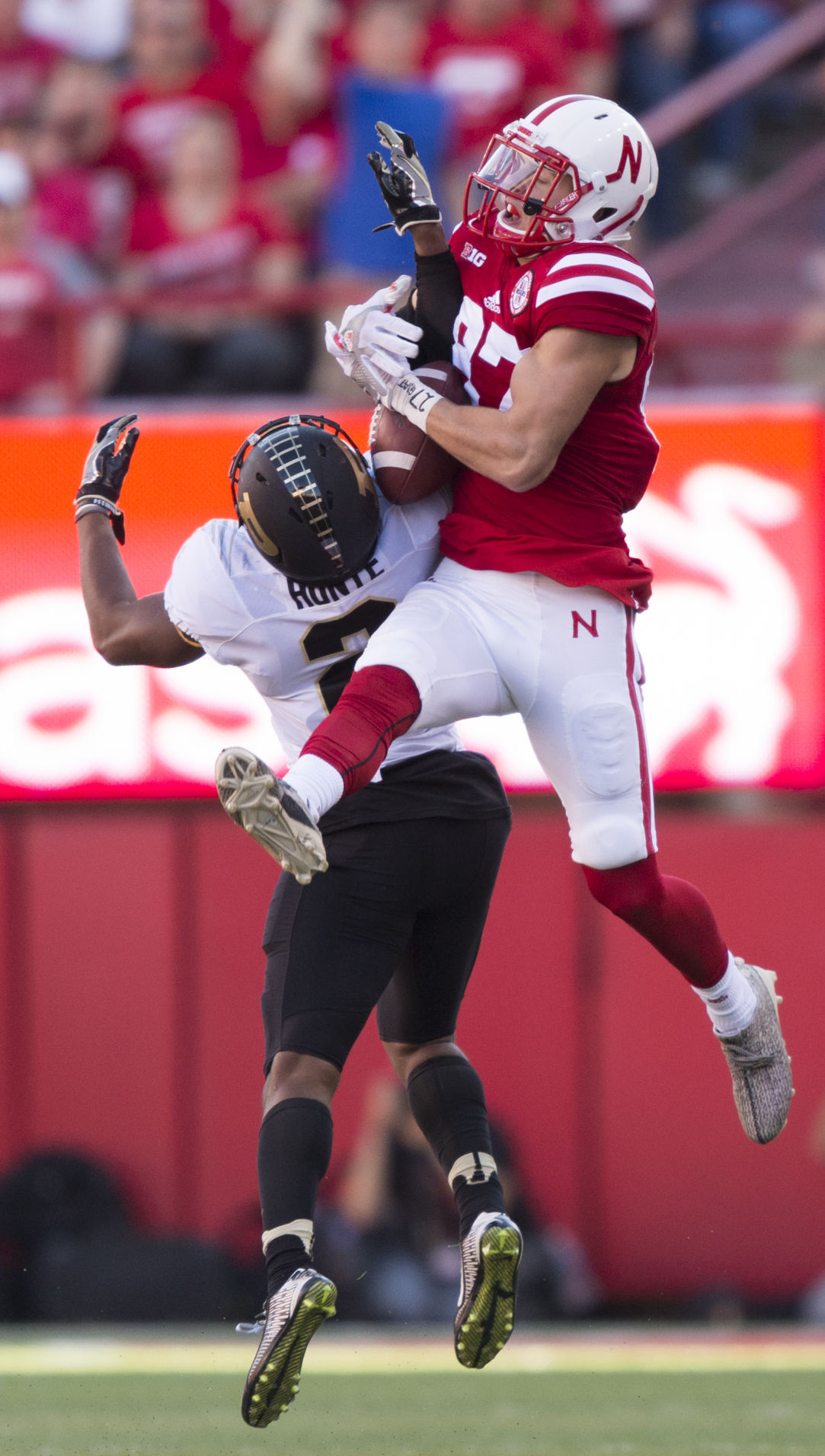 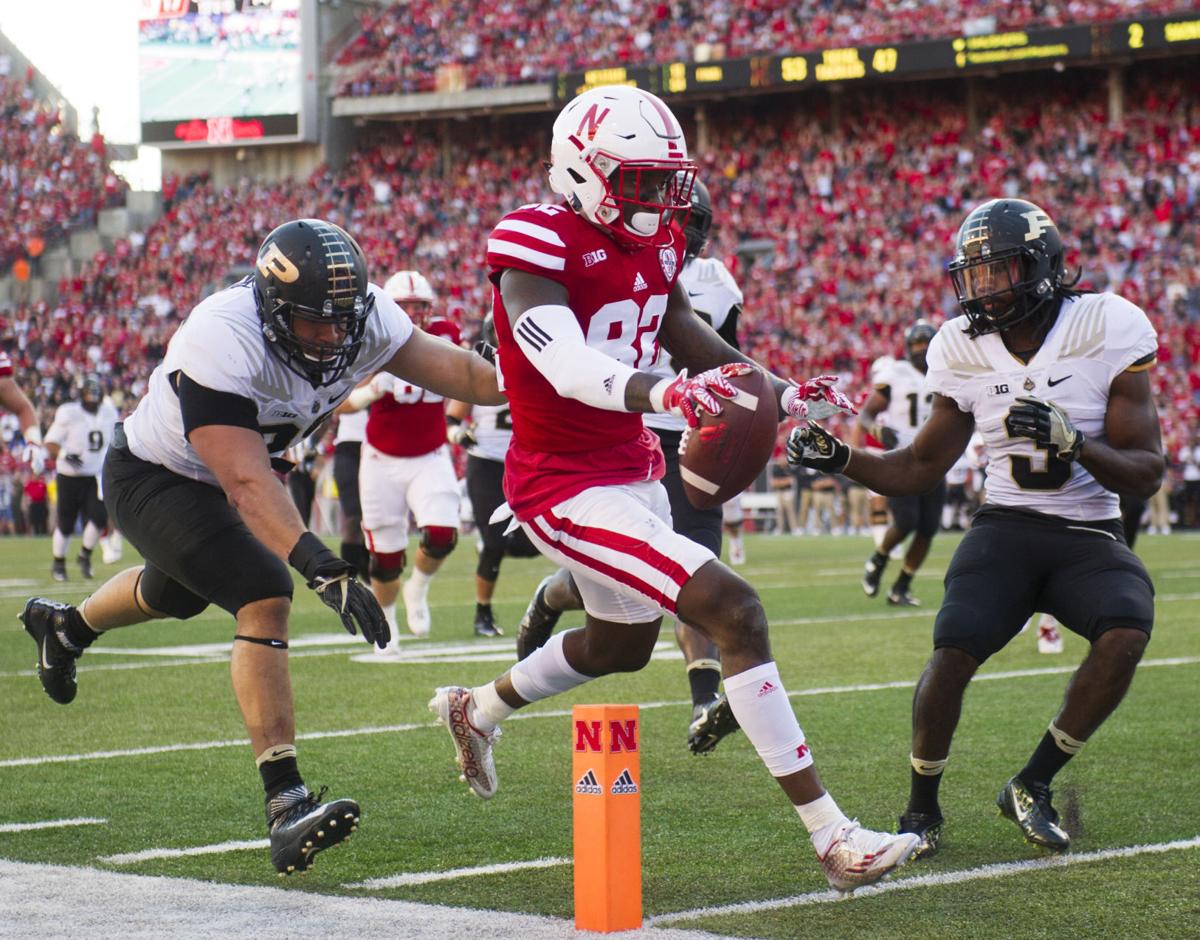 Nebraska wide receiver Alonzo Moore (82) scores in the fourth quarter as Purdue's Evan Panfil (95) and Leroy Clark (3) are late on the play at Memorial Stadium on Oct. 22.

Who knew Bill Murray's character in "Groundhog Day" was a follower of Husker football?

Yes, here was another Saturday of football like ones before it, with the Huskers once again laboring through a rough patch in the second quarter, making their loyal following squirm, then turning it on late, enough to beat Purdue 27-14.

Hey, it's a bottom-line biz. Still a 0 in the loss column. That doesn't mean Husker coach Mike Riley was overflowing with joy.

"We were always just struggling today, it felt like to me," Riley said. "I do appreciate how we do struggle and how we do eventually have enough in us to make some plays and win the game. It's just kind of glimpses to me of how we could be if we could just find a little more consistency in the running game primarily. Because we can do the rest of it."

It's the first time Riley has been the head coach of a college team that is 7-0.

But is that team ready to go up to Wisconsin and win a top-10 matchup? Plenty will be skeptical after Saturday’s work.

Inside the Husker locker room, though, the belief that somehow, someway, they'll get it done seems to remain as strong as ever.

When senior linebacker Josh Banderas was asked what he thinks we're about to learn about Nebraska football in Madison, he said:

"No matter what team is in front of us, we’re going to prepare the same and find a way to win somehow."

Banderas and the Blackshirts found their footing after an inauspicious start, not giving up another point after Purdue took a 14-10 lead on an 88-yard pass from David Blough to DeAngelo Yancey with 10:52 left in the second quarter. That play, occurring on third-and-11, "really caused everything to be like it was for so long," Riley said.

The Huskers' lack of a run game sure didn't help. There's little doubt Wisconsin defenders, who form an impressive front seven that again owned the day in a 17-9 win at Iowa on Saturday, will be licking their chops watching Nebraska's O-line struggle against a Purdue team that ranked 124th against the run.

When someone asked offensive coordinator Danny Langsdorf after the game if Terrell Newby, who had 82 yards on 22 carries, had trouble picking his lanes, the coach rightly responded, "There weren't any."

"What it appears the best way to describe what we are right now is, there is no rhythm," he said.

The Huskers finished with just 157 yards on 37 carries, numbers greatly spiked by three long Tommy Armstrong runs that covered 57 of those yards.

It didn't help that left tackle Nick Gates was clearly playing at less than 100 percent with a bad ankle, and that right tackle David Knevel’s ankle knocked him out of a game early for the third time this season.

"I still think that O-line is pretty dinged up, whether they’ll admit it or not," said senior wide receiver Brandon Reilly. "But once that fourth quarter comes, it seems like those 3-, 4-yard runs, we break a few."

But since Nebraska generally couldn't get it done by land, it had to do it through the air. Of its 409 total yards, 252 came through the passing game.

Husker receivers came through, with De’Mornay Pierson-El giving Nebraska a 17-14 lead with 7:45 left in the third quarter when he caught a bullet of a slant pass from Armstrong and outran the secondary for a 40-yard touchdown.

On Nebraska’s next drive, Reilly caught a 24-yard pass on third-and-16 from the Husker 12-yard line that kept alive an 11-play, 82-yard touchdown march.

It ended with Alonzo Moore doing a tightrope walk down the sideline for a 24-yard touchdown on a jet-sweep play.

Close to stepping out? "I was real close,” Moore said. "I seen my pinkie toe. Thank God my pinkie toe is smaller than the rest of my toes."

It gave the Huskers a 24-14 lead with 14:05 left. They added a field goal. Stopped Purdue on a drive that reached the Nebraska 34. They kept the thing on the rails, now having outscored teams 98-13 in the fourth quarter.

If it wasn't easy on the eyes, Reilly said confidence remains "through the roof" for this team.

"Last year at halftime if we were down, there was a lot of doubt throughout the locker room," he said. "Everyone is still relaxed even if that first half wasn’t too pretty."

Flawed but unbeaten, the Huskers will head to Madison with a two-game edge in the standings over both the Badgers and Hawkeyes.

They'll have to win against a Wisconsin team that has dropped them 59-24 and 48-17 in Nebraska's two previous visits to Madison since NU joined the Big Ten.

But these are new coaching staffs. It's also true a Nebraska win would basically bury the Badgers in the Big Ten West race.

Husker no huddle: The pain in the neck edition

A running collection of updates and more from Saturday's game against Purdue.

No. 8 Nebraska hosted the Boilermakers at Memorial Stadium on a perfect October Saturday. Photos by the Journal Star photo staff.

Steve Sipple gives his grades for Nebraska performance against Purdue.

It was a stunner.

Notebook: Kieron Williams in the right place even when in the wrong place

Kieron Williams seems a most honest guy. Before you give him too much credit for his two interceptions Saturday, he's got to get something off…

Yays and Nays: Blackshirts showing an ability to move quickly past a bad play

Nebraska wide receiver Alonzo Moore (82) scores in the fourth quarter as Purdue's Evan Panfil (95) and Leroy Clark (3) are late on the play at Memorial Stadium on Oct. 22.