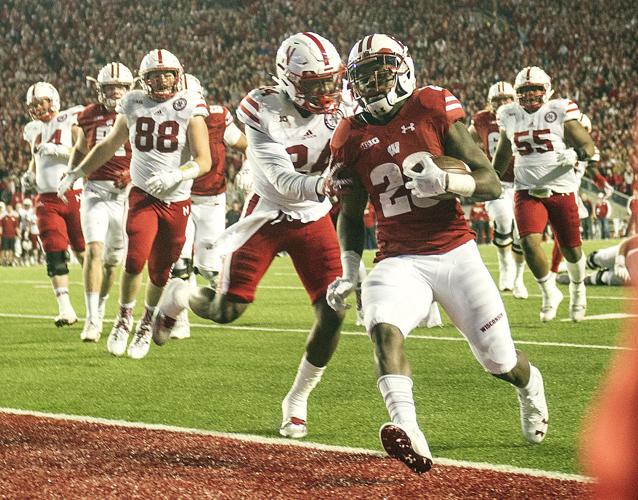 Wisconsin's Dare Ogunbowale slips away from Nebraska's Aaron Williams to score in overtime on Saturday at Camp Randall Stadium in Madison, Wis. 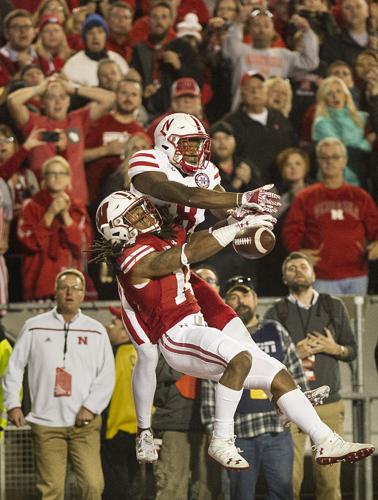 Wisconsin's D'Cota Dixon (left) breaks up a pass to Nebraska's Stanley Morgan on the final play of the game as the Huskers fell to the Badgers 23-17 in overtime Saturday at Camp Randall Stadium in Madison, Wis. 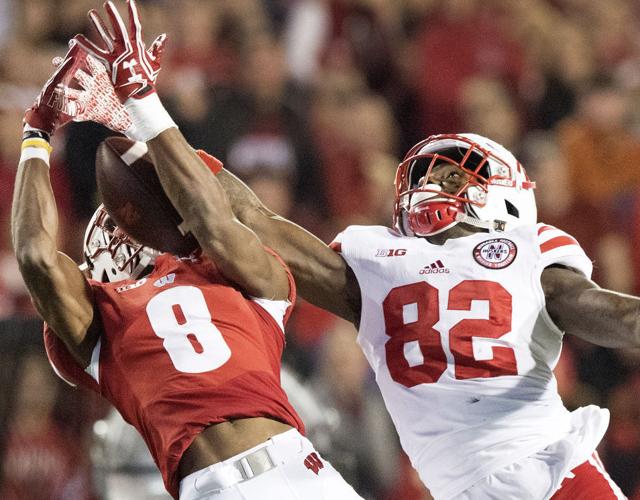 MADISON, Wis. — The Huskers called "Foltzy." It came up Foltzy.

This was all leading somewhere, wasn't it? Nebraska junior kicker Drew Brown sure thought so as he paced the sideline, waiting for what had to happen now, waiting for his foot to meet a football and make a rowdy crowd go silent.

"I think the entire team felt it," Brown said. "I thought it was destiny."

It did not end that way. It ended with a deafening roar, as Nebraska quarterback Tommy Armstrong lofted a fourth-down pass from the 23-yard line to the end zone, to Stanley Morgan for a .... nope, nope, the thunder inside of Camp Randall Stadium told all.

Wisconsin cornerback D'Cota Dixon knocked it to the turf and Nebraska had lost 23-17 in overtime in a game with so many twists and turns, and even spine-tingling moments, like the Huskers winning the overtime toss because the commemorative coin came up showing their late teammate.

"It was not to be," said Husker head coach Mike Riley. "It was really disappointing to lose it. I will say everything about our team that I know is confirmed, that they'll continue to fight.

"We certainly got to improve some things to finish out where we want to. There's no doubt about it. But as far as what we have to work with, it's all good."

Even after Wisconsin took just four plays to score a touchdown in overtime, an 11-yard run by Dare Ogunbowale, who wounded the Huskers for 120 yards on just 11 carries, that "destiny" Brown referenced was there to be grabbed.

Wisconsin kicker Andrew Endicott, who had missed a 45-yard field goal in the final two minutes, pushed the PAT in OT wide-left.

"Oh, s---, don't give us that," NU senior tight end Sam Cotton said of what he thought. "Don't do that. You can't set it up any better for us. We just have to finish."

The Huskers could win it by traveling 25 yards. They only got 2.

Terrell Newby gained 3 on the first play and lost 1 on the next. "I thought we had a good draw. We had been hitting that draw," offensive coordinator Danny Langsdorf said of that second-down run. "They had a run-through on the backside that got us."

Now it was third-and-8. Armstrong fired a pass across the middle. The ball hit the turf. So did Jordan Westerkamp nearby, after a bump from Wisconsin linebacker T.J. Watt. No call. Fourth down.

Asked if he felt there was contact, Riley said, "It looked like it to me. I don't know. I didn't have the greatest vantage point, so I don't really know that it's necessary for me to comment any further. But it looked like something was going on over there where he was impeded. But I couldn't see it really."

Fourth-and-8. So much noise. Armstrong let it go.

"I thought we had the last play," Langsdorf said. "I thought Stan popped through there nicely. We had a little bit of push there. Probably if we could've thrown it a hair quicker and get it to them, I thought he had come out of that open for a split second."

Badgers rejoiced. Huskers walked off the field with their first loss of the season. They still have a one-game edge on Wisconsin in the Big Ten West race, but nothing gets easier with a trip to Ohio State next on the docket.

"It was kind of anticlimactic. ... The confidence when we took the field, we were going to win that game right there (in overtime)," Cotton said. "And then, obviously, it just didn't work out."

The Blackshirts, too, would like another shot at their defensive series in OT, although that wasn't going to keep senior linebacker Josh Banderas from being proud of the defense and his teammates.

"We know where we need to go," he said. "No one is hanging their head. And there's no reason to hang their head. We played hard. We fought. We showed what kind of heart we had. We're going to keep moving from there."

The Huskers had once again owned the fourth quarter, rallying from a 17-7 deficit, and moving past two first-half interceptions to cut it to three with 13:45 left when Armstrong scored on a 2-yard run to finish off a 14-play, 75-yard drive.

Armstrong was just 12-of-31 in the air for 153 yards against a Badger secondary that hotly contested most everything.

"I thought Tommy fought like crazy," Riley said. "You know, I think especially in a tight, close-to-the-vest game like this, everybody will evaluate very, very closely the reads that he had to make, both in throwing the ball and the run-pass stuff.

Certainly there are some late-game series the Huskers will want back. Nate Gerry had two interceptions in the fourth quarter, including one that set NU up on the Badger 46.

Nebraska didn't move the ball a yard on three plays after that first Gerry pick. Had to punt.

The Huskers drove to the Wisconsin 18 later in the quarter but had to settle for a tying field goal.

And on the final series of regulation, they pressed to midfield with a minute left before hitting a wall when one big completion might have given Brown a chance to win it there.

Two years ago, the Huskers made a slow trek out of the locker room in this stadium, embarrassed.

This was different. This was the pain in the heart of coming close but missing, just missing.

"I don't think anybody on our team was thinking, 'Well, I hope we can walk away with a moral victory here,'" Cotton said. "I think we can compete with anybody."

A running collection of updates and highlights from Saturday's game.

Brian Christopherson gives out a game ball and other thoughts from Saturday's game.

No. 11 Wisconsin prevailed 23-17 in overtime over No. 7 Nebraska on Saturday at Camp Randall Stadium. Photos by the Journal Star photo staff.

Huskers not dwelling on past, but know Wisconsin wall must be scaled

MADISON, Wis. — What use, really, is an extended conversation about that cold day that grew colder by the touchdown?

Steven M. Sipple: Waffling about a Big Ten brawl that seems too close to call

MADISON, Wis. — In the spirit of campaign season, trust me on this one.

Plenty of pride, but no moral victories for Husker defense

MADISON, Wis. — There was a swagger with this Nebraska defense. You could see it during the game, after Nate Gerry's second interception, when…

The Badgers handed the Huskers their first lost of the season on Saturday in Madison.

Notebook: Blackshirts lament the run that helped take them down

MADISON, Wis. — Nebraska's sideline had diagnosed the play, yelling "sweep!" before the ball was snapped on Dare Ogunbowale’s final run in overtime.

You knew Nebraska wouldn't march up and down the field Saturday night against Wisconsin's top-10 defense.

Despite loss, Huskers stay put in the Top 10

Are the Huskers really a top-10 team? That question kept surfacing.

Wisconsin's Dare Ogunbowale slips away from Nebraska's Aaron Williams to score in overtime on Saturday at Camp Randall Stadium in Madison, Wis.

Wisconsin's D'Cota Dixon (left) breaks up a pass to Nebraska's Stanley Morgan on the final play of the game as the Huskers fell to the Badgers 23-17 in overtime Saturday at Camp Randall Stadium in Madison, Wis.