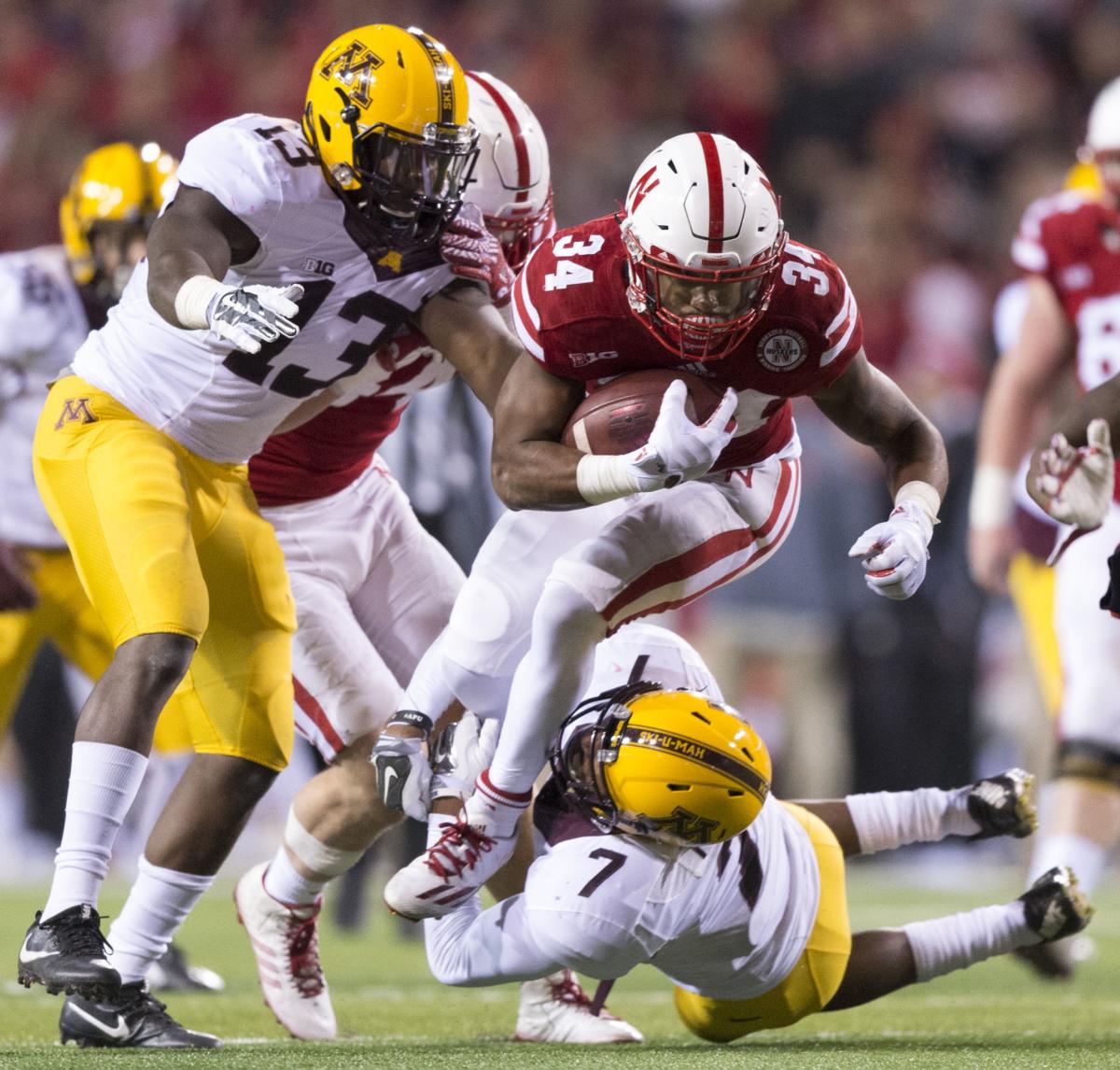 Nebraska running back Terrell Newby (34) is tripped up by Minnesota's Damarius Travis (7) and Jonathan Celestin on a fourth-quarter run Saturday at Memorial Stadium. 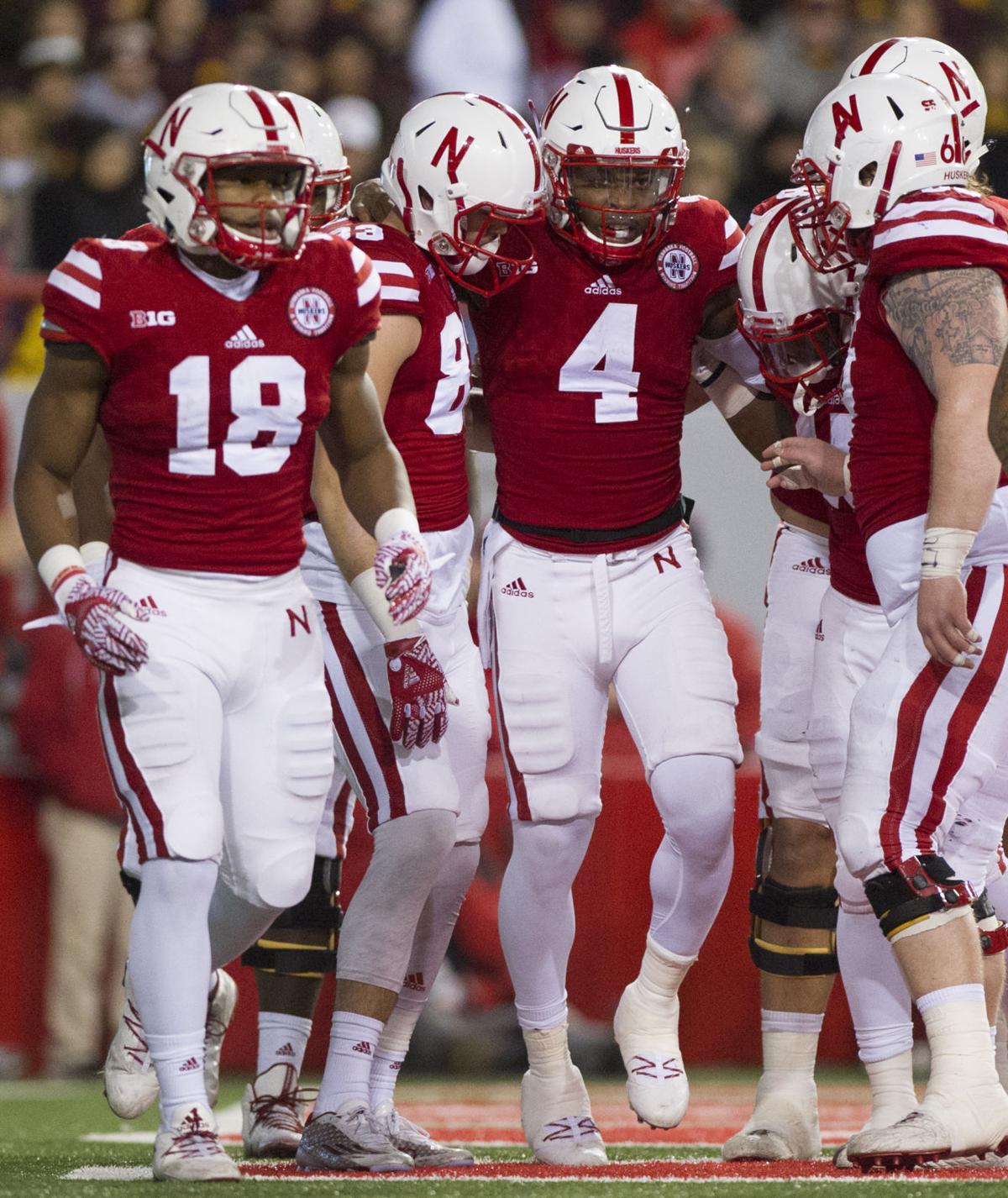 Teammates help a gimpy quarterback Tommy Armstrong (4) who was favoring his left leg after he scored the Huskers' go-ahead touchdown in the fourth quarter Saturday at Memorial Stadium. 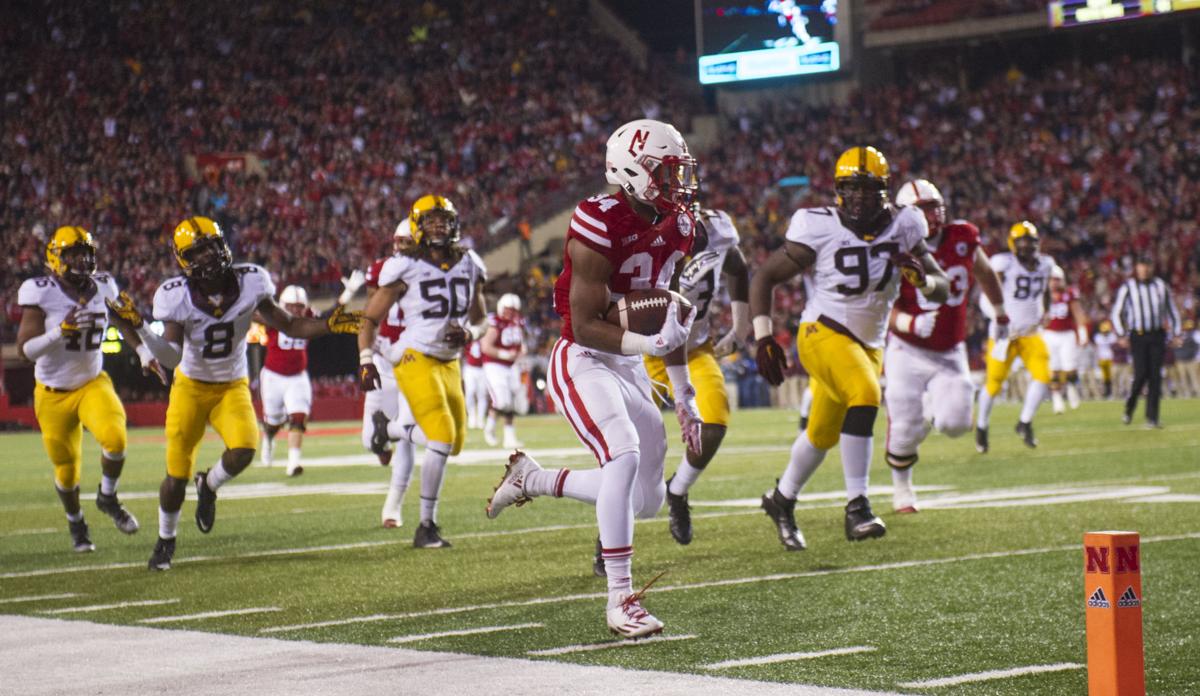 It's just sort of what they do, these guys. Walk to the edge of the cliff, peer down, cause their fans to say words that their mothers would not approve. And then, step back and find a better way.

Even if that means the senior quarterback having to get carried off the field by two of his big linemen, Jerald Foster and Tanner Farmer, after the game-winning touchdown because he's that beat up.

"Honestly, I told them to put me down at first. I just wanted to sit down," said Tommy Armstrong. "They said, 'No, we got you.' So they just picked me up."

Oh, but these Huskers aren't. Behind a gutty performance by Armstrong and a dominant second half of work by the Blackshirts, they rallied Saturday night for a 24-17 win against Minnesota that pushes the Big Red record to 8-2.

It doesn't erase last week's drubbing at Ohio State, but this win allows the conversation to move forward with these Huskers. Ten wins in the regular season are still in reach. The Big Ten West race isn't over if Wisconsin trips.

"I suppose by this time of year we could describe it as a typical Husker win," head coach Mike Riley said. "That probably would be appropriate with that game."

Typical in that for the fourth straight home game, Nebraska trailed at halftime, down 17-10, with Minnesota having had 38 plays to the Huskers' 22.

The first of those Minnesota points came only after the Huskers were called for having 12 men on the field during a punt. "Junior high teams can do better than that," Riley said.

When they gathered in the locker room at the half, the Huskers were irritated at themselves.

"A lot of guys were just talking even before the coaches got in there ... a lot of guys just getting after each other and telling us to continue to play," said senior defensive tackle Kevin Maurice.

"We left a lot out there," said senior wide receiver Jordan Westerkamp.

* The Huskers took the opening second-half possession 79 yards in 11 plays, converting three third downs and scoring on a 31-yard screen pass to Terrell Newby, in which the senior running back somehow slithered between a few Gophers around the 10-yard line and found the end zone. Tie game.

* Then the Blackshirts put their foot down. "I thought that was major-league football in the second half," Riley said.

Minnesota scored no points and gained only 93 yards in the second half.

* Armstrong played hurt, and played well. After going through a week of concussion protocol, the quarterback was cleared to play only Saturday.

He hurt his ankle on a quarterback sneak in the third quarter and had to leave for a series, then came back and led a 91-yard touchdown march in the fourth quarter that was as good as any NU offensive drive this season.

"I think we just kept fighting until we won," Riley said.

Minnesota coach Tracy Claeys was not as chipper. In explaining what changed in the second half, he said, "Well, we didn't block, and we didn't tackle. That's what changed, for whatever reason."

On the game-winning drive, Nebraska marched 13 plays. There was a 29-yard pass to De'Mornay Pierson-El. A third-and-11 strike from Armstrong to Alonzo Moore for 16 yards. A Jordan Westerkamp catch for 10. A Newby run for 9. A fourth-and-1 conversion.

And, finally, Armstrong scooting around the left side for a 13-yard touchdown with 7:17 left. His night was done. The hamstring was hurting now.

You are incredible, @Tommy_Gun4!

That wasn't going to keep the smile off his face after the win. Also, about next week? "My last home game here, I won't be sitting out for that, I promise you," he said.

If Armstrong's touchdown and dramatic ride off the field from teammates seemed the defining moment in the game, it hardly settled the deal.

The Blackshirts would need to make two final stands. And their final one would not come without things getting a little hairy.

The Gophers drove to the Husker 17 in the final two minutes. Minnesota quarterback Mitch Leidner had just completed a 25-yard pass to Tyler Johnson.

The Gophers no longer needed to hurry but did so anyway. Leidner fired across the middle, near the goal line and ...

Aaron Williams raised his fist in the air before the play was even complete.

"I had a feeling he was right there," Aaron said. "And then when I looked back for a split second, I was like, 'I hope he picked it.' ... I didn't even look to see what else he did with the ball," he said.

Kieron Williams ran it to the 14, slid and that was the last of the Gophers.

"It felt good just to be able to get over the hump of the last two weeks and be able to close the game out and get away," he said.

Riley admitted the biggest hurdle his team faced was a mental one after losing 62-3 a week ago.

"It should be pointed out that that combination doesn't feel really comfortable, except with this team," Riley said. "I really had faith that this team would come back and play. And they did."

Trailing at the half

Nebraska was down 17-10 at halftime Saturday, marking the fourth straight home game in which NU trailed at the break.

No. 19 Nebraska hosted Minnesota on Saturday at Memorial Stadium in a key Big Ten West Division battle. Oh yeah, there was a broken chair on t…

There was a point earlier in the night when his teammates probably wondered if he'd be on the same flight home with them.

Matt Millen arrived at Memorial Stadium at 11 a.m. Thursday. He chatted with Mike Riley for a bit but stayed on task.

Husker Extra's Brian Christopherson gives you the names and numbers to watch for Minnesota at Nebraska.

Steven M. Sipple: Husker win wasn't a swish, but it was definitely progress

Kieron Williams was in a celebratory mood, and nobody could blame him.

It's Big Ten football, so you know a trophy had to be involved.

The scene: Virtual reality telecast makes you feel right there

Deep in the heart of Memorial Stadium, in a loading dock nowhere near anything that was happening on the field, Martin Andersen and his group …

Yays & Nays: Huskers deserve credit for handling business in their own yard

It was near the end of May, some slow day in local sports news, when the Las Vegas books released their over/under projections for win totals …

Nebraska running back Terrell Newby (34) is tripped up by Minnesota's Damarius Travis (7) and Jonathan Celestin on a fourth-quarter run Saturday at Memorial Stadium.

Teammates help a gimpy quarterback Tommy Armstrong (4) who was favoring his left leg after he scored the Huskers' go-ahead touchdown in the fourth quarter Saturday at Memorial Stadium.