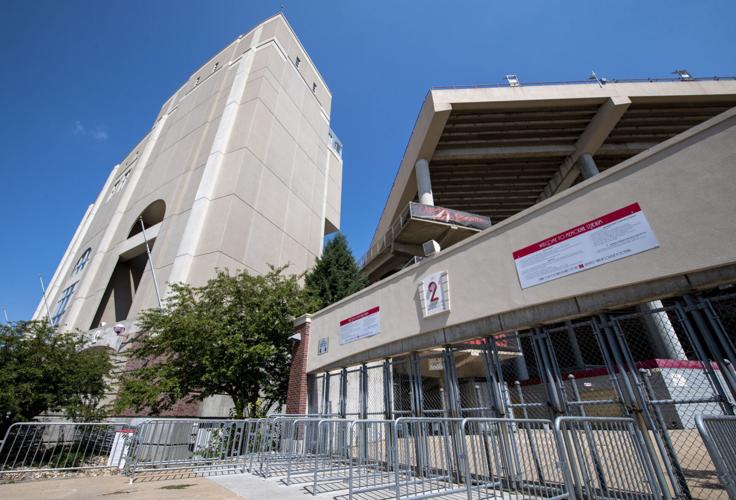 Memorial Stadium will be deserted for another fall Saturday after the cancellation of the Nebraska-Wisconsin football game. 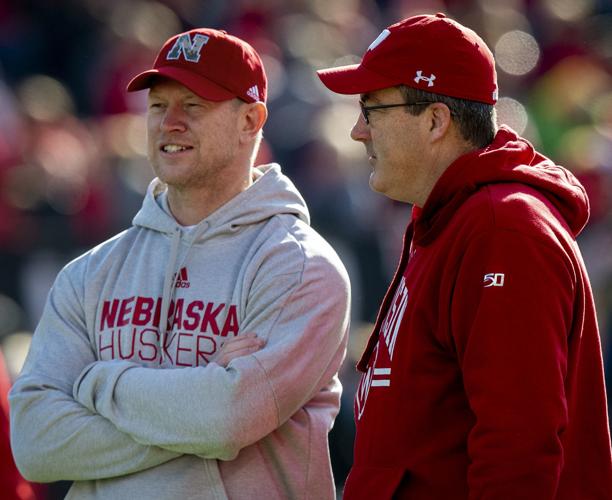 The coronavirus pandemic has claimed its first Big Ten football game, and it’s going to cost Nebraska its scheduled home opener on Saturday.

The Halloween matchup between the Huskers and Wisconsin has been canceled due to positive COVID-19 tests and ongoing concerns within the UW program, the school announced Wednesday morning.

The decision to pause activities and cancel was made by Wisconsin athletic director Barry Alvarez and Chancellor Rebecca Blank, "in consultation with the Big Ten Conference," according to a UW news release.

The game will not be rescheduled. The Big Ten confirmed that the game will be considered a "no contest."

Nebraska has not commented on the cancellation as of Wednesday afternoon.

Badger coach Paul Chryst on Monday expressed confidence that the game would be able to be played even among reports of trouble in his quarterback room.

However, Chryst later in the week found out he was among 12 people associated with the UW program (six players and six staffers, according to a school release) that tested positive for COVID-19 in the past five days. The school said more tests are pending and that it is pausing all team activities for seven days. He said during a Monday news conference that he felt fine physically — and he indicated none of the players or coaches who tested positive have had a significantly different experience than he has — but also disappointed.

"As we've gone about this, we were wanting the opportunity and our players want the opportunity to play," Chryst said. "Then, to not have that opportunity — and I know why and I support and understand why we're not — but when you have a hand in it, that's where there's disappointment."

Alvarez said the program had had just one positive test over the previous month, so the steep climb to 12 positives since Friday night's game caused him and Blank to feel as though they had to pause and attempt to "get our arms around," the outbreak.

The issues began Sunday night when reports surfaced that Badger redshirt freshman quarterback Graham Mertz had tested positive for COVID-19 on Saturday after throwing for five touchdowns in his starting debut Friday night against Illinois. Since then, Wisconsin’s next quarterback in line, Chase Wolf, also reportedly tested positive.

The Big Ten’s medical protocols have two different testing numbers that teams must report on a daily basis. They look like this:

And while a team must halt practice and competition if it is in the red zone in both categories, that is not the only way for a game to be called off. The protocol says if a program is orange-orange or orange-red, it should do multiple things including "consider viability of continuing with scheduled competition."

It is unclear if Wisconsin had reached "red-red" as of Wednesday morning's decision, but the fact that they have additional tests pending suggests the school expects its numbers to continue to climb as the week progresses.

The Wisconsin State Journal on Tuesday reported that the Big Ten “is working on further clarifications to address situations when rates are in those ranges, giving school presidents and chancellors and athletic directors the latitude to consult with medical and public health officials to determine whether a game should be canceled.”

Last week, Nebraska coach Scott Frost said he did have concerns about the conference trying to fit nine games into a nine-week window.

Red Report: Manning getting closer; return of Reimer; no change in plans; homecoming for Rogers

This is the second time in three years that Nebraska has had a game canceled. Frost’s debut in 2018 against Akron was scuttled by lightning. That year, at least, the Huskers had a bye week later that they were able to fill in with FCS Bethune-Cookman.

The situation is much different given the Big Ten’s pandemic-shortened season. After the conference decided to eschew the 10-game schedule it had built that maximized flexibility because it didn’t feel like it had enough answers on rapid testing or potential side effects of the virus to start in September, it pushed the start date back to Oct. 24. That meant attempting to play a schedule that features nine games in nine weeks, with no wiggle room, up to a league title game on Dec. 19. That’s a hard deadline because currently the College Football Playoff committee is set to select its field on Dec. 20.

Nebraska was already on track to have its latest home opener since 1985 with the slated Halloween start and now it will have to wait an extra two weeks. The Huskers' next scheduled game is an 11 a.m. kickoff on Nov. 7 at Northwestern before the team returns to Lincoln for a Nov. 14 matchup against Penn State.

The conference has guidelines for determining divisional champions and tiebreakers in the event that not every team is able to play every game. A team will have to play at least six games in order to be eligible for the title game unless the average games played in the conference falls below six. The Big Ten also has a series of tiebreakers involved to help determine a division champion in the event teams play an unequal number of games.

The most precious commodity of this football season is flexibility. The Big Ten lost it Aug. 11. Why there wasn't more of a desire within the league to simply pause and push back the initial start date 3-4 weeks is why we are where we are.

If we are going to wear masks, we should actually wear them. pic.twitter.com/ERnyM0y1UR

I have to write this or I won't be able to live with myself today. To Nebraska fans: Love your passion. You are always friendly as hell. But not every development/decision by the Big Ten is part of a conspiracy to stick it to your athletic department/teams.

We have paused team activities.

In reality, the #Huskers are catching a break by having a bye week following the Ohio State game. Remember, @coach_frost did not get an entire fall camp to prepare the team for the season. So this bonus week gives them a chance to better prepare for the remainder of the year.

Just imagine if Florida wasn't back to work this week and Missouri was sitting without a game this weekend...

Graham Mertz tested positive 10/24. He can ramp up under B1G rules and play vs. UM 21 days later on 11/14. Anybody whose initial antigen positive came Sunday or later, though, is out for that game.

Same kind of timeline/complications for any other team that has an outbreak.

So the @HuskerFBNation/@BadgerFootball game has been canceled.

This is why the Big Ten should have given itself flexibility. Could have shot for 10 games in 14 weeks, if needed.

#Huskers home openers under Scott Frost:
1) Cancelled because of severe weather
2) 66 yards in the second half in a close win over South Alabama.
3) Rescheduled/cancelled 4 times in 3 months because of COVID-19 concerns.

Mood when this weekends game is canceled 😔 pic.twitter.com/oEUQgnTgFq

My sense is Nebraska officials won't push back much on the rationale to cancel the Wisconsin game. We'll see on that. Could be wrong.

The key question: Is there a possibility of Nebraska playing a non-con foe this weekend? Would the Big Ten allow it?

It SHOULD be allowed.

It is what it is. Time to pull out the video on Northwestern. Next week both teams lose a day due to the election. Time to prepare.

Nebraska needs an opponent this week. @WKUFootball should play them tomorrow night, pick up $1 million and then head to Provo.

Wisconsin should be credited with a LOSS

(Unless they can prove the number of positive cases is at the threshold that the Big Ten set.) https://t.co/NcZAleSLjN

This is exactly why you don’t schedule an 8 games in 8 weeks. I hate everything. This is absolutely ridiculous. #GBR see you in Evanston 😔 pic.twitter.com/lp7h3C2qLz

Remember when all the coronabros in sports media were obsessed with myocarditis & saying CFB had to be canceled because of it? I sure do. It’s way past time for the Big Ten to wipe out the 21 day quarantine. pic.twitter.com/jlxBuZhDL2

No official decision has been made on the status of the game and an NU official said they haven't heard anything to suggest otherwise.

Facing fewer games, what if NU ends up tied at the top of the Big Ten West? Well, it's complicated

The process for determining Big Ten division champions and title game participants is complicated by COVID-19. Here's what you should know.

A nonconference game in Lincoln would happen in a safe environment, most likely with tighter testing protocols than even the Big Ten has in place.

Where do the Huskers go from here, in the wake of a canceled Halloween game against Wisconsin? The guys break it down.

Following Wisconsin's cancellation, the Huskers had an FCS opponent lined up. But the league voted against allowing Nebraska to play.

Future Husker with Seth Malcom: Eight-man star does it all for Fremont-Mills

Sipple blog: B1G denying NU chance to play makes little sense. So how about an explanation?

The Big Ten doesn't exactly put a premium on transparency, at least not under the current leadership.

Before they were Huskers: Jaimes was just a 'tough, nasty, competitive dude' at Texas power Lake Travis

"If somebody starts as a sophomore, especially on the offensive or defensive line, they're pretty dang good."

Watch now: Husker Extra Live talk through an up-and-down week that ends with a weekend off

Steven M. Sipple and Parker Gabriel talk through a wild (and disappointing) week in Nebraska football.

From Kevin Warren to Chattanooga, an inside look at how Bill Moos, Huskers tried to play football Saturday

Nebraska AD Bill Moos reflects on a hectic period as Nebraska tried to find a replacement game: "The least we could do is take a run at it."

Memorial Stadium will be deserted for another fall Saturday after the cancellation of the Nebraska-Wisconsin football game.