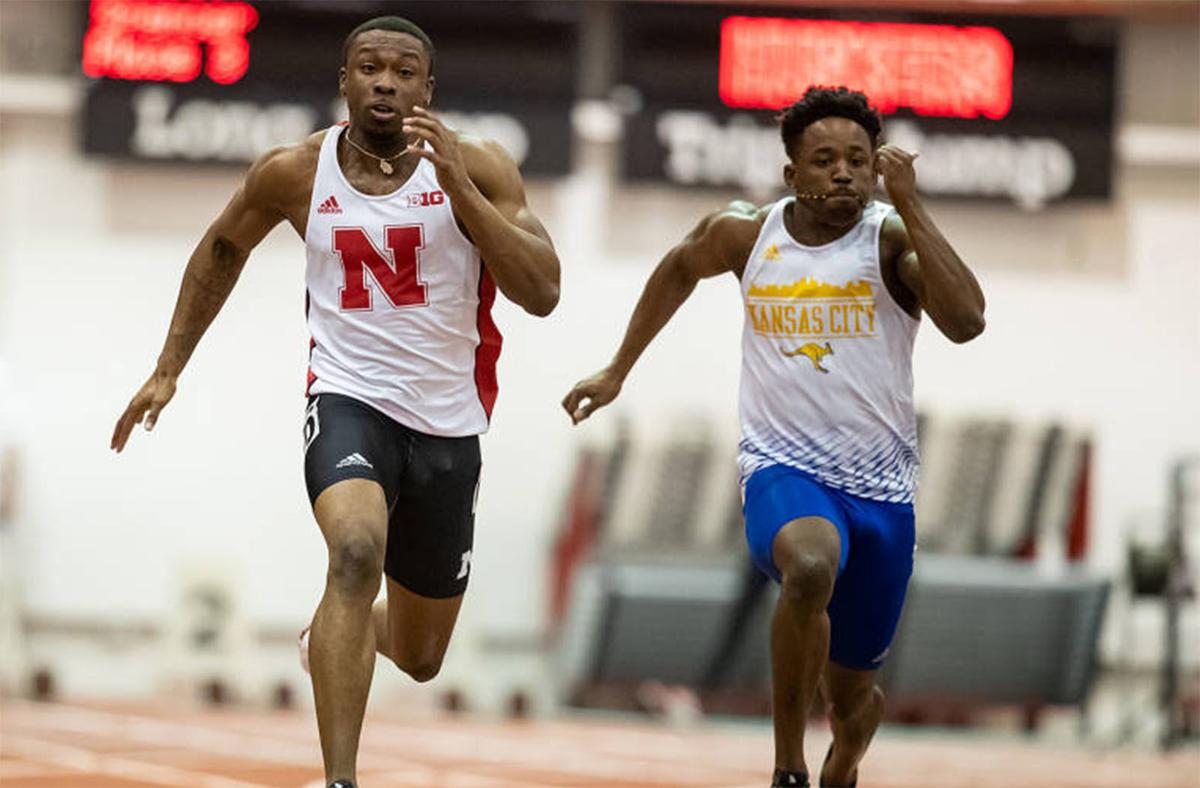 Jaron Woodyard has turned into a two-sport athlete at Nebraska, competing in football and track. 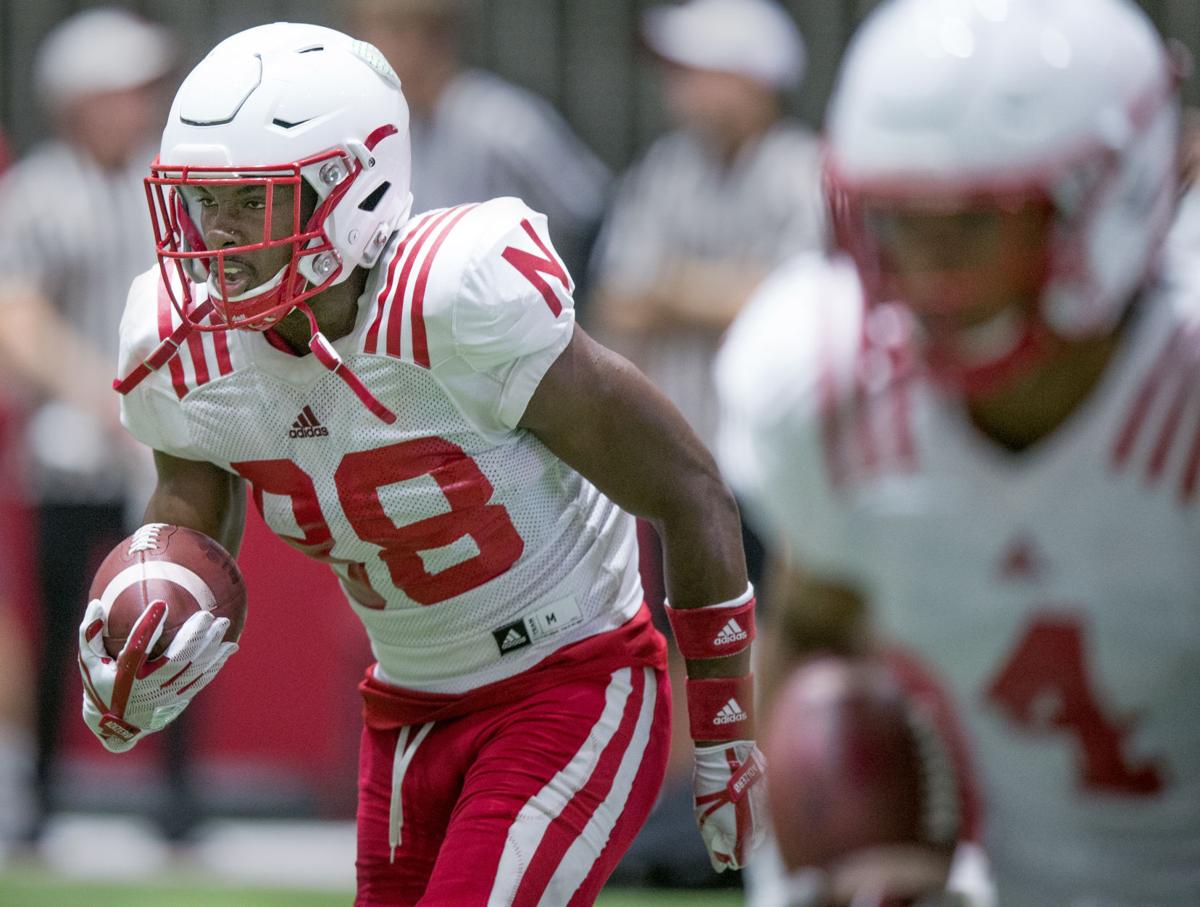 Husker receiver Jaron Woodyard warms up during football practice in August 2018 at the Hawks Championship Center.

Gary Pepin has learned to be at least a little bit guarded when a Nebraska football player says he wants to run track.

After all, a few have tried in recent years and not panned out.

“We haven’t had one that has been with us for very many meets or very many seasons for a long time,” the decorated NU track and field coach said Thursday. “I always wondered why they didn’t have any speed on the football team because we had a couple guys over the years that had come out, and they weren’t fast enough to make our sprint relay or anything, so they weren’t really very fast.”

Then, on top of that, sometimes a football player wants to be on the track team but doesn’t really love track.

Neither of those problems applies to wide receiver Jaron Woodyard.

The Husker senior and Arizona Western Community College transfer has been a pleasant surprise — and a welcome addition — to the NU sprint team, contributing both to the 4x100 relay and the 100 meters so far.

“It’s been exciting just because I haven’t ran in so long,” said Woodyard, who ascended the receiver depth chart this spring and worked mostly with the No. 1 unit by April's Red-White Spring Game. “Just being able to run again is a blessing and it’s fun.”

It all came together relatively smoothly. Woodyard ran some during the indoor season and now, with spring football in the rearview mirror, he’s able to run outdoors, too.

“I just asked Frost because he let his players run at Oregon and his mom was a coach here,” Woodyard said. “Then I just had to get permission from (head strength coach Zach Duval) and if it was a go from him, then it was cool with (Frost). I just had to balance the schedules out like running here and working out there.”

Pepin said sometimes talented track and football athletes in high school get to college and put on too much weight to retain or improve their speed. That hasn’t been the case for Woodyard, a testament to Duval, who touts his development program as one that helps athletes put on good weight and actually get faster at the same time.

Woodyard also ran on the “B” 4x100 relay squad that posted a 40.2 in Lubbock. On Saturday at the Nebraska Invitational in Lincoln, Woodyard will get to run the 100 and the 200, his first competitive race at the latter distance since high school.

“I haven’t run a 200 in a long time, but I’m not too worried about running it because that used to be my favorite event,” he said with a smile. “I know how to run the race and I know I have to get out. The 200 is a full-out sprint. As long as I’m conditioned and I’m relaxed, I know I’ll do pretty well.”

Arizona Western didn’t have track, so Woodyard had a multi-year gap before picking it up again at NU.

“That’s a tough layoff,” Pepin said. “At the same time, you and I both know who the fast guys were in our grade school. The fast guys have always been fast, and you’re either one of them or you’re not one of them.

“Well, he’s a fast guy. It’s just kind of a matter of getting back in the groove with that.”

Woodyard still has some ground to make up if he’s going to be a real threat in the Big Ten in the 100. His best time got adjusted to 10.5 due to altitude, putting him tied for 11th in the conference. Illinois’ Devin Quinn ran 10.06 in March and three others have posted 10.20 or better.

For most of the NU track team, this is a weekend to get in a new event or make up time lost to injury. Many Huskers will be held out because they’ve already hit qualifying marks or are “dinged up,” as Pepin said.

But Woodyard will be grinding away, looking to improve his time in the 100 and returning to a race he loves for the first time in years.

Overall, it’s been a good match and one Pepin hopes helps grow the relationship between football and track. He mentioned seniors Carlos and Khalil Davis, who have each been throwers in track for years, and redshirt freshman Camron Jurgens, who he hopes might be down the road. Maybe there will be more fast guys, too.

“(Woodyard)’s been a real bonus for us because he’s done a very nice job, he’s a real good guy, he’s a good team guy — he likes the other guys on the team and they like him — he comes to practice when he’s supposed to, good discipline and all those things,” Pepin said. “And he’s a good runner.”

What: Nebraska's final home track and field meet of the season.

As lousy as this year's NFL Draft felt for Nebraska, there are no guarantees the Huskers will make a lot of noise in next year's draft.

More of the same for Huskers on Saturday: Signs of promise, much work remaining

On a day that largely felt like a party at Memorial Stadium, the Red-White Spring Game itself felt workmanlike.

With Vedral's improvement, McCaffrey's potential, Huskers show they have viable options behind Martinez

Get ready for the Spring Game with an easy, breezy positional guide to the Huskers

A recent run of high-level high school talent in Nebraska and the Omaha area means opportunity for the Huskers, but also more recruiting competition locally.

Barrett Ruud was as reliable as the U.S. mail as a Nebraska linebacker, seemingly always in the right position to make a play. He seldom missed tackles, essentially always closing the deal. Sort of like he's done as a recruiter for the Huskers.

A roundup of the college track action from Saturday.

Saturday, when he received his diploma, it became official: Jermarcus "Yoshi" Hardrick, who completed his college playing eligibility at Nebraska in 2011, became the first person in his family — on either side — to graduate from college."I didn't know when it was going to happen, but I knew it was going to happen, man," the former Husker offensive lineman said Monday.

After 'terrible' walk-on tryout, NU's Wolinski transforms into one of the nation's top javelin throwers

The tryout for the Nebraska track and field team was a bit shaky.

A look at the Nebraska athletes competing at nationals.

Jaron Woodyard has turned into a two-sport athlete at Nebraska, competing in football and track.

Husker receiver Jaron Woodyard warms up during football practice in August 2018 at the Hawks Championship Center.