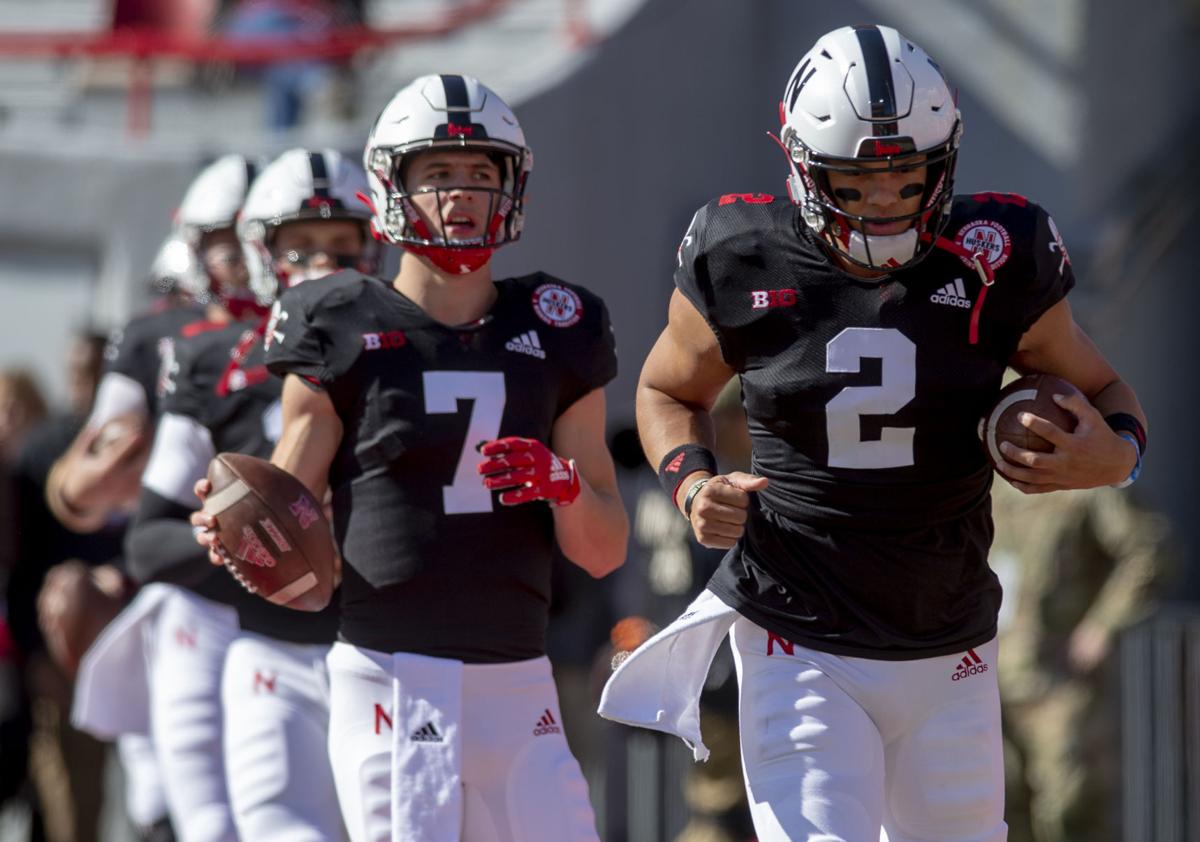 Nebraska quarterback Adrian Martinez (2) warms up before a game against Indiana in October 2019 at Memorial Stadium. 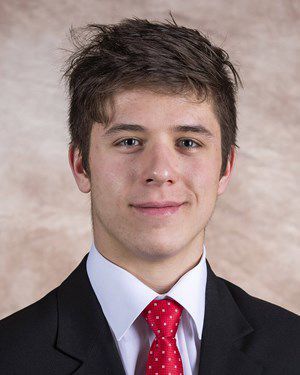 Adrian Martinez got right to the crux of the matter.

Yes, the Nebraska junior quarterback acknowledged, he knows he has competition from redshirt freshman Luke McCaffrey.

“When I was recruited, I was told it was an open competition and that’s the case regardless of what year it is,” Martinez told reporters Thursday. “The best quarterback is going to play. Period. Luke has been pushing me and I love it. I’m here for the competition.

An update on WR Omar Manning, thoughts on the QBs and more from Frost on the radio

One week after offensive coordinator Matt Lubick said that Martinez is NU’s starter “today” but that the evaluation was ongoing, Martinez didn’t sound like a player who was taking anything for granted.

“I would say I’m just trying to work harder physically, get myself in the shape I know I need to be in,” Martinez said. “And, in addition to that, I’m trying to take each day and make the most out of it. Try to live in the present, try to make the most out of that practice and not kind of look forward to two weeks, three weeks from now. If that means diving into practice tape more, working on my game as much as I can and really trying to do what the coaches are asking of me.

“All of that is just around self-improvement, trying to become a better leader. I think the little things are where I can become a lot better.”

McCaffrey’s ascendance has helped bring that out of Martinez.

McCaffrey said he feels like he’s made progress over the past 10 months both in his mechanics and in the weight room, noting that he’s up now to 205 pounds. Not surprisingly, quarterbacks coach Mario Verduzco said he sees McCaffrey putting more “thrust” behind the ball when he’s throwing it.

“I feel very confident in that,” McCaffrey said. “Most of the credit there, I know, goes to Coach Verduzco because of the different ways he’s been able to fix little things in my stroke here and there, and then over time it turns into one final piece. That’s something we work on every single day.”

From a physical standpoint, Verduzco said his top two are “very similar in a lot of ways in terms of their skill set.”

The biggest gap on paper between McCaffrey and Martinez is in the experience department, considering Martinez has started 21 games — he’s missed three across the past two seasons due to injury — and McCaffrey has appeared in just three. Martinez has already set or matched myriad school marks in his first two seasons, including a record four games of at least 400 yards of total offense and total yards per game (295.1 as a freshman in 2018). However, Verduzco said he didn’t put an outsized amount of stock in the experience gap.

“I don’t think it’s probably as big as maybe it would be if Lukas had never got any reps, No. 1,” Verduzco said. “No. 2, Lukas has got a boatload of reps with both the No. 2s and the No. 1s during camp. So I wouldn’t say that’s a huge factor."

The redshirt freshman appeared in three games last fall, completing 9 of 12 passes for 142 yards and two touchdowns, and also averaging 7 yards per carry with another score in limited duty.

“It was huge just being able to get in a game situation and be able to run this offense in some truly live reps, especially as a quarterback, (where) in practice you aren’t always getting hit,” McCaffrey said of his time on the field in 2019. “That’s huge and that’s something that’s very valuable moving forward.”

Martinez had offseason surgery on his left shoulder but said Thursday that he feels as good as he has in quite a while. In 2019, he completed 59.4% of his passes for 1,956 yards and 10 touchdowns against nine interceptions while rushing for 626 yards (4.3 per carry) and seven more scores.

The two clearly expressed mutual respect and admiration for each other, too.

McCaffrey said, “I’m so thankful to have a guy like him, a leader like him who’s ahead of me that I can look up to, and since the first day I’ve been on campus he’s welcomed me with open arms and kind of shown me the way of the road here.”

Said Martinez, “It’s not my decision, but Luke is a very talented player and I know he can be great for us at quarterback, running back, receiver. Whatever the coaches decide they want to do, that’s what we’re going to do, and if that’s going to help us win games, I’m for it.”

Among the questions will be how extensively Nebraska will try to involve whichever quarterback does not begin the season as the starter in a week-to-week game plan. In 2018, when Martinez and Tristan Gebbia were competing for the job ahead of coach Scott Frost’s first season at NU, Frost and Verduzco both said they like to have one guy as the starter rather than having some variation of a “two-quarterback system.”

Of course, Nebraska has also used multiple quarterbacks in each of the past two years out of necessity due to injuries to Martinez and other reasons. Then, last year against Iowa in November, McCaffrey got some run in certain packages.

“That’s going to be ultimately Frosty’s decision as it relates to how all of that gets played out,” Verduzco said Thursday. “But I think you’d love to have as many good quarterbacks in your room as possible that you feel good about, that you feel can go into a game if they have some game prep and win a game for you.

“We feel good about Adrian and Luke both.”

Watch now: Martinez says McCaffrey has been pushing me, "I love it"

One key to Ty Robinson's big offseason in the weight room? Having the right workout partners

"They took me as their workout partner and, I mean, they just go crazy in the gym."

Life in the Red: Husker DL coach Tony Tuioti has several candidates to fill the middle

With Darrion Daniels in the NFL, it's shaping up to be a committee approach on Nebraska's interior defensive line. Here are some names to watch.

The Huskers are now running live tackling drills "quite often." With that, the defensive picture is starting to clear up. Here's what we know.

Two-Minute Drill: Reacting to conversations with the key members of Nebraska's offense

Mario Verduzco talked about more than just Adrian Martinez and Luke McCaffrey. The latest on freshman Logan Smothers, who he said is "sharp as a tack."

Watch Now: The latest glimpse of a Nebraska football practice, from the turf at Memorial Stadium

The latest glimpse of the Husker football team's practice sessions, released Friday by Nebraska Athletics, takes viewers onto the field.

Eric Crouch expresses confidence in Adrian Martinez in part because of the junior's ability to weather adversity. That's critical at QB, Crouch says.

Dedrick Mills will get plenty of chances this season to run the ball as NU's "bell cow" back. He's probably kicking the stall in anticipation.

Nebraska quarterback Adrian Martinez (2) warms up before a game against Indiana in October 2019 at Memorial Stadium. 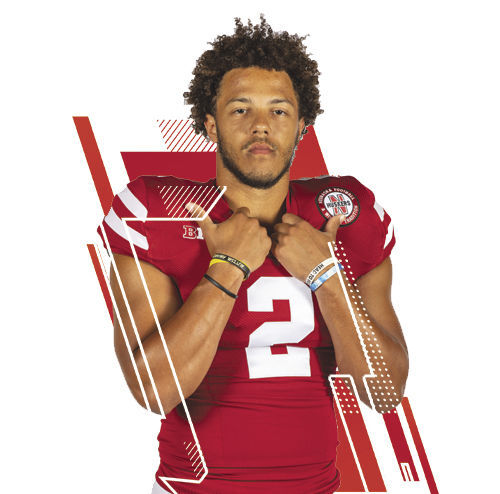