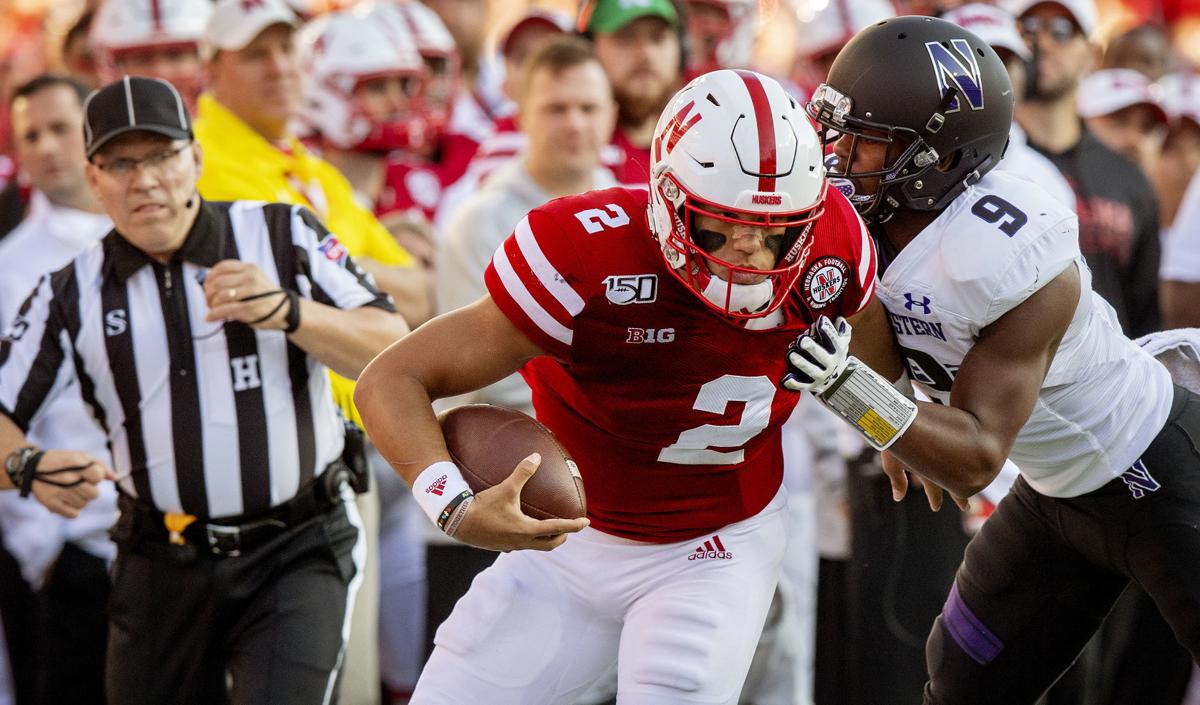 Nebraska quarterback Adrian Martinez (2) gets pushed out of bounds by Northwestern's Roderick Campbell (9) in the third quarter on Oct. 5 at Memorial Stadium. The Huskers haven't said whether or not Martinez will start against Indiana on Saturday. 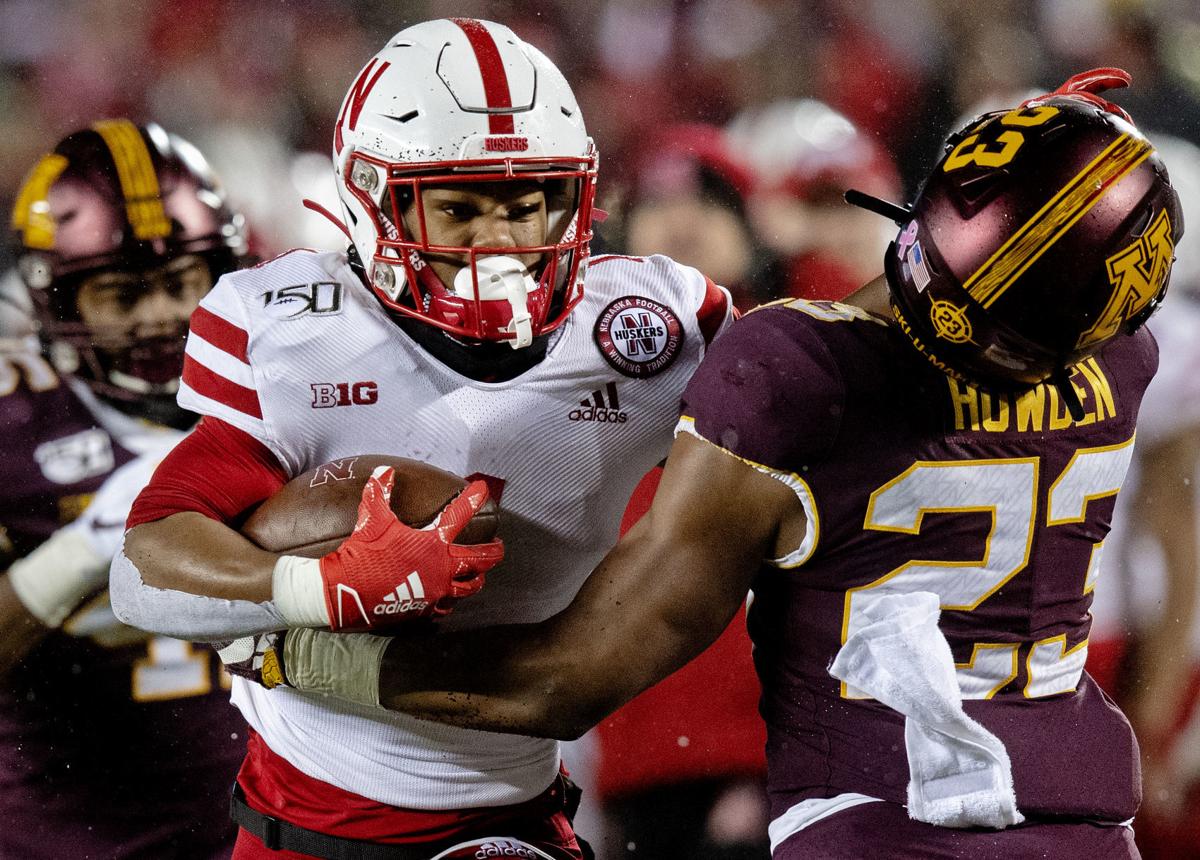 As the Nebraska football team returns from its first bye week and prepares to host Indiana on Saturday afternoon, it's an ideal time to sneak a look back at the first seven games and take stock of where the Huskers find themselves at the season's unofficial midpoint.

At 4-3 overall and 2-2 in Big Ten play — and coming off a dispiriting 34-7 loss at Minnesota on Oct. 12 — the Huskers clearly hit the bye week at a frustrating moment in the scope of the regular season.

After the game, sophomore wide receiver Kade Warner said that one of the things head coach Scott Frost told the team during a lengthy postgame discussion was to remember, “It’s never as good as you think and it’s never as bad as you think.”

So, with that in mind, let’s take a straightforward look at the good, the bad, the ugly and the surprising with five games remaining in the regular season.

Big plays and turnovers have dried up. Frost wants his offense to rack up big plays and use an opportunistic defense to create more chances to score. Nebraska forced nine turnovers in the first three weeks and registered 24 “chunk” plays to beat Illinois despite going minus-3 in the turnover department. In three games since, the Huskers have forced just one takeaway and have just 17 “chunk” plays. The offense has subsequently stalled, registering just one touchdown in each game.

A needed break. Nebraska and Michigan State were the only two teams that hadn’t had a bye week in the Big Ten before this weekend. Now, the Huskers have to get healthy, get back to basics and come out of the off week with a sense of urgency.

Where do the big plays come from? Can sophomore running back Maurice Washington return to form? Can the Huskers find any other reliable threats in the passing game? Can the tight ends get untracked? That’s to say nothing of the injuries to quarterback Adrian Martinez and dynamite freshman Wan’Dale Robinson.

Can the defense carry the flag? Early in the season, it looked like Erik Chinander’s unit might be capable. Recently, a staunch outing against Northwestern has been sandwiched by poor performances against Ohio State and Minnesota. There are dangerous offenses remaining on the schedule and NU’s offense has struggled so far. We’ll find out exactly what kind of group Chinander has over the coming five games.

Get the next two. If Nebraska finds a way to beat Indiana at home and Purdue on the road, the Huskers would go into their second bye week at 6-3 overall and 4-2 in Big Ten play, perhaps not in great position to win the West, but bowl eligible and with a shot to recalibrate the sights for a November stretch run that includes Wisconsin, Maryland and Iowa.

Lamar Jackson: The senior cornerback is having the type of season he predicted and has gone from head-scratching high-profile recruit to a potential NFL Draft pick. He and Dicaprio Bootle form a rock-solid pair on the edges. Jackson’s maturity and play style are quickly catching up to his natural talent level.

Wan’Dale Robinson: Everybody expected big things from the freshman wide receiver, but he’s met every expectation and more. Before an injury against Minnesota, Robinson had become perhaps NU’s most important skill player. The Huskers need to hope he can return from an apparent left foot/ankle injury quickly.

Quarterback depth: Sophomore starter Adrian Martinez played well over NU’s first five-plus games and sophomore backup Noah Vedral acquitted himself well after Martinez went down with an apparent left knee injury against Northwestern. Can they be better? Absolutely, but the Huskers are much better depthwise than 2018.

Secondary development: Jackson’s not the only player in Travis Fisher’s room who has improved. The group survived a Week 1 injury to junior Deontai Williams and have been pretty solid overall. Now, can they turn the turnover tap back on down the stretch?

Maurice Washington: The sophomore showed game-breaking ability early in the season, but has been slowed almost entirely the past three games (43 total yards on 19 touches). He’s served two half-game suspensions, been in and out of games, and hasn’t shown a lot of burst the past three weeks.

Senior outside linebackers: Husker coaches said before the season that they were relying on seniors Alex Davis and Tyrin Ferguson to be difference-makers on the edge. Combined, they have 18 tackles (four for loss) in 13 games.

Kanawai Noa: Noa arrived this summer and immediately gained a reputation as a fast learner with sure hands. Frost has been adamant that Noa’s played well, but the ball hasn’t found him. Through seven games, the Cal graduate transfer has seven catches for 71 yards and a touchdown.

Offensive line play: Nebraska hasn’t been able to run the ball consistently for most of the year. The Huskers ran for 364 yards against Illinois but have just 468 since (3.84 per carry). Only 14 teams in the country have allowed more than NU’s 19 sacks.

Four Nebraska true freshmen have already exceeded the four-game maximum and will not be redshirting in 2019: Robinson, outside linebacker Garrett Nelson, cornerback Quinton Newsome and walk-on linebacker Luke Reimer.

After that group, only wide receiver Darien Chase has played in three games. The Huskers have several that have played in two games — defensive backs Noa Pola-Gates and Myles Farmer, tight end Chris Hickman, running back Rahmir Johnson — and more that have played in one and are surely ticketed for redshirt seasons.

Two interesting nonfreshmen to keep an eye on: junior college defensive lineman Keem Green, who should play in three of Nebraska’s final four games and sophomore kicker Barret Pickering, who could be a redshirt candidate if he misses one more game due to the injury that’s kept him out all season.

A look at the numbers through Week 7

Here’s a look at Nebraska offensively and defensively in general statistical terms compared to the 2018 season.

Nebraska head coach Scott Frost has to be feeling a level of anxiety as he looks for answers to problems in all three phases of the game — offense, defense and special teams. But offense is his baby. He calls the plays. And he now must find enough good ones to help Nebraska (4-3, 2-2 Big Ten) get to six wins and a bowl game.

KEARNEY — A warrant has been issued for a California man involved in a construction zone crash in Nebraska that killed three people.

This week represents the first week since Scott Frost took over as Nebraska's head coach that the team has a scheduled bye week. As such, Huskers coaches will be out on the road recruiting from now through the end of the week.

Frost on radio: Vedral graded out 'really well' against Gophers; Huskers need others to step up

Nebraska experienced its share of significant problems in last week's 34-7 loss at Minnesota, but quarterback Noah Vedral wasn't among them.

After suggestion from fan, John Cook also is trying to take the NU volleyball team to Ireland to play

In his 20 years as Nebraska volleyball coach the motto for coach John Cook has been to dream big. His latest? Join the football team in Ireland in 2021.

Husker Extra Podcast: What's ailing the Huskers and what must change in the coming weeks

Steven M. Sipple: A Saturday without Husker football? Allow me to share some highlights

As Saturday arrived in all its sun-splashed glory, I felt an immediate surge of bye-week euphoria. No Nebraska football game to cover. No honey-do list. The day was a blank slate. It should be a crime to feel this much joy.

The Cornhuskers' matchup with the Boilermakers will start at 11 a.m. and is set for broadcast on Fox, the Big Ten announced Monday morning.

Maurice Washington will not play against Indiana; future with program 'still to be determined'

Scott Frost's appearance at the Nebraska football weekly news conference lasted just shy of 12 minutes. That's a very short stay at the podium — one of the shortest I can remember in 25-plus years of covering these events.

The Nebraska football team set out to use the first of its two bye weeks as a chance to get back to basics.

Ohio State is still on top, but Minnesota is rising and Wisconsin is falling in Parker Gabriel's latest Big Ten power rankings.

Nebraska quarterback Adrian Martinez (2) gets pushed out of bounds by Northwestern's Roderick Campbell (9) in the third quarter on Oct. 5 at Memorial Stadium. The Huskers haven't said whether or not Martinez will start against Indiana on Saturday.