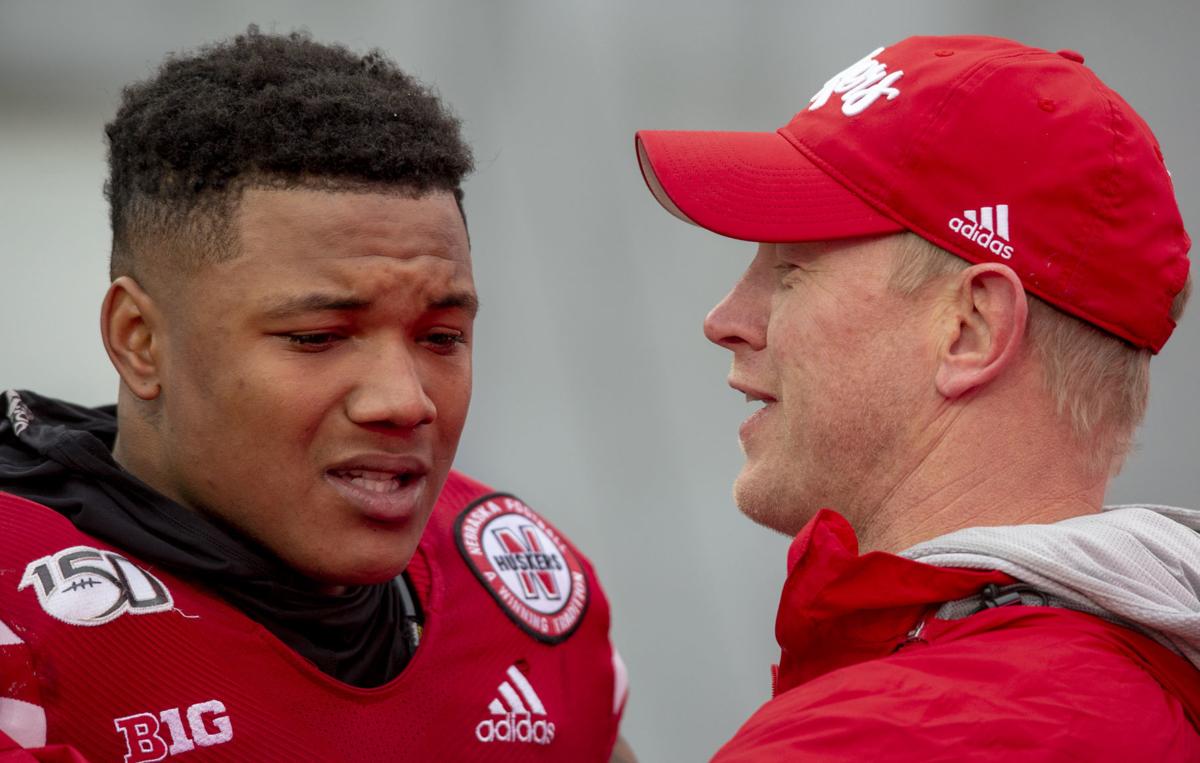 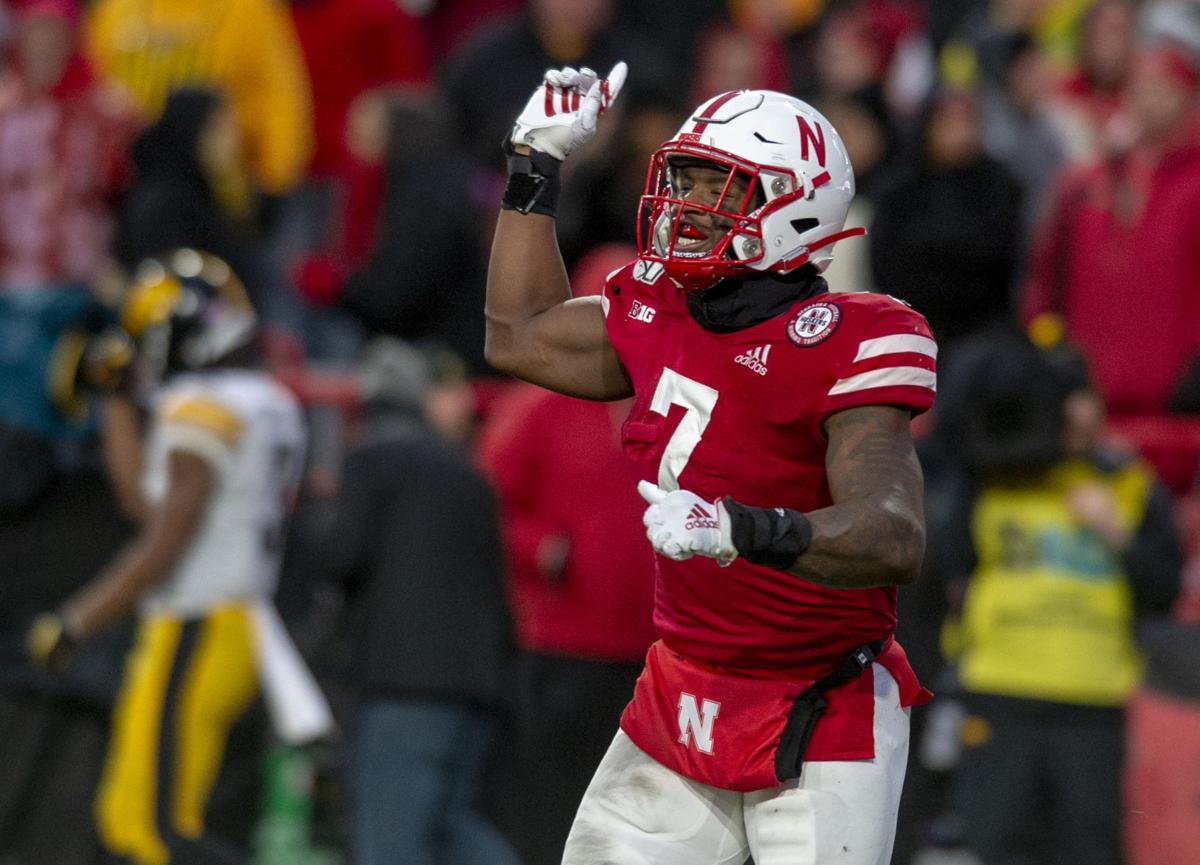 Nebraska captain Mohamed Barry shown in his final game with the Huskers on Nov. 29, 2019, at Memorial Stadium.

Among so many questions around the Nebraska football program as a long offseason begins to set in, one fact is for certain: The Husker defense is going to look considerably different next fall.

The Huskers’ entire starting defensive line graduates, as do cornerback Lamar Jackson, inside linebacker Mohamed Barry, outside linebacker Alex Davis and a host of rotational players.

Jackson and the defensive linemen, in particular, improved their games considerably from 2018 to 2019, becoming the strong points of the defense. Senior defensive lineman Khalil Davis led the team with eight sacks, and his brother Carlos was second with four. Darrion Daniels only arrived on campus in January, but he was elected a captain and he backed it up, anchoring the middle of Erik Chinander’s 3-4 defense and representing a significant upgrade from recent years on the interior.

Jackson, a 6-foot-3, 215-pounder, turned himself into a likely NFL Draft pick and perhaps a relatively early-round one at that.

Barry’s led the team in tackles the past two seasons. So on and so forth. The unit overall didn’t play as well as it wanted to over a 5-7 season, but by almost any metric it took a step forward from 2018.

Where it goes from here, this group won’t be around to find out. But those who spoke with reporters after Friday’s 27-24 loss against Iowa, bringing curtains to their collegiate playing careers, had nothing but good things to say about the future.

“You should see it; we’re close, you have to believe it, you have to see it, you have to feel where everybody is coming from, including the coaches,” Jackson said. “We’re all one body and we all believe our coaches and we all believe in each other. These last couple of weeks, Coach (Scott Frost) has been saying, ‘Get on somebody's hat.’ Ever since then, I’ve never had more fun. Spontaneous celebrations (are) one of the best feelings in football. I’ve never had more fun, I truly loved it.

“We pretty much found the formula. It isn’t just get serious and be quiet. It’s love each other, it’s have fun, enjoy everything you do, do it with a purpose. As long as we keep that rolling through the offseason, this thing is going to get flipped faster than anybody can expect. I have all confidence that it’s going to happen.”

Nebraska senior defensive back Lamar Jackson reacts after the Huskers fall to the Hawkeyes 27-24 on Black Friday.

Jackson, a high-profile recruit out of high school, had a career full of highs and lows in Lincoln, but turned in a strong final season and made big strides over his final year-plus after getting benched early last season.

“I wish we had him for four years because I really appreciate what he has done and the progress he has made,” Frost said Monday.

“I learned a lesson through it all, through all the hard times, through all the good times,” Jackson said Friday. “At the end of the day, even though the outcome was what it was, it’s some of the most fun I’ve had my whole career, playing for my brothers. I felt like everyone was out there giving it all they got, everybody left it all out there on the field, including myself.

“Of course it sucks, but I can’t change the outcome. I can only tell you how I feel and I’m extremely appreciative of everything. … There’s nothing I can really say except I wish we got the win, but I’m extremely grateful for everything and every situation.”

Barry struck a similarly reflective tone. It’s a group that could have struck a bitter tone at the end. The four seasons Jackson was on campus, NU totaled 22 wins and 27 losses. In Barry’s five: 27-34.

But that’s not what the linebacker and captain from Georgia thought about on Friday afternoon.

“I’m just thankful for this program. The past five years has meant a lot to me,” Barry said. “It’s been a process, it’s been a journey, it’s been something I’ve been thankful for — the pain, the success, the achievement, the mistakes, everything has molded me into the man I am today. The people around me who have put their arms around me and have helped craft me into the guy I am now. I love my bros, the Blackshirts I’ve played with, the friends I’ve made, the best friends, the lifelong friends I’ve created here. I’ll always be thankful to this program.”

* Nebraska really struggled on first down on Friday against the Hawkeyes, totaling only 40 yards on 30 tries (including a false start penalty that didn’t actually count as a snap). Of those 30, 14 went for zero yards or negative. That’s just not a sustainable rate.

On a similar note, NU got very little going in its horizontal passing game — swing passes, laterals and screens. Those represented eight of Nebraska’s 12 completions on the day and netted only 18 yards (including seven for zero yards or negative), by the Journal Star’s count.

Spielman had a 39-yard touchdown grab in the third quarter, and his other two catches totaled minus-5. Stoll was targeted six times and had three catches for a grand total of a single yard.

* Iowa’s last-minute scoring drive is all the more unbelievable when the first two downs are taken into consideration. Nate Stanley started with back-to-back incompletions — the first an overturned call that took a long completion away from the Hawkeyes — leaving Iowa in third-and-10 with just 19 seconds remaining from its own 26. The odds of scoring points from that position, particularly with no timeouts remaining, cannot be good.

* A couple of season wrapup items: Nebraska was more reliant on the run game overall in 2019 than it was a year ago. The Huskers ran the ball on 63% of their snaps this season, a significant uptick from 53.5% in Year 1 under Scott Frost.

* A sure sign of a team that’s stuck somewhere in the middle: Nebraska scored 336 points on the season and allowed 333. If you want to outperform your scoring differential, you’ve got to be good in close games, and the Huskers weren’t, going 2-4 in games decided by one possession. In the past two years combined, they’re 3-9.

* A look at the final participation numbers for Nebraska’s redshirt-eligible players: Everybody except the four freshmen mainstays — WR Wan’Dale Robinson (10 games), OLB Garrett Nelson (11), DB Quinton Newsome (10) and ILB Luke Reimer (10) — will retain a redshirt. Here’s how the numbers shook out:

* Robinson finished his standout freshman season with 1,029 all-purpose yards and 793 offensive yards in 10 games. The freshman from Frankfort, Kentucky, tried to go against Iowa but the hamstring injury that cost him the past two games just wouldn't cooperate and he finished with three carries for 14 yards.

* Interestingly, junior wide receiver JD Spielman was targeted 15 fewer times this year than last (78 compared to 93) even though he played in all 12 games for the Huskers compared to 10 last year. He did more damage with his chances this fall, though. Spielman finished with a career-high 898 yards on just 49 catches, good for 18.3 per catch and 11.5 per target, both significantly better than his marks of 12.4 and 8.8, respectively, in 2018.

* Many folks expected a big uptick in production from Nebraska’s tight ends group in 2019, but it didn’t materialize.

Ask yourself this: If Adrian Martinez was still a can't-miss, no-doubt superstar in the eyes of his coaches, would Scott Frost be giving packages of plays to two other QBs?

Huskers flip a switch on defense, but Hawkeyes dim the lights one more time

You know there’s trouble brewing on the defensive side of things when "Chinander" starts trending on Twitter on a Friday afternoon.

Nebraska had to dig itself out of first-half deficits of 11 and 14 points against Iowa on Friday at Memorial Stadium. The Huskers also were digging out of several second- and third-and-longs, too.

Iowa kicker Keith Duncan watched his kick sail through the uprights. Then he turned to Nebraska's bench, wagged his index finger and "may or m…

Nebraska broke out a three-quarterback system Friday, and it provided equal parts excitement and confusion for those watching and those on the field.

Tony Daniels knows his sons, Darrion and Damion Daniels, appreciated just how special this season was for the brothers, playing on the Nebrask…

Unlike your Thanksgiving Day meal, Nebraska's recruiting visitors list was light for the Iowa game.

Nebraska entered Saturday's full college football slate with a razor thin chance at qualifying for a bowl game despite its 5-7 record.

The offseason is not yet 48 hours old, but Nebraska's coaches are already out on the road recruiting as a 14-day contact period opened Sunday.

Follow along live as the Nebraska coaching staff makes its rounds on the recruiting trail ahead of National Signing Day.

Three outgoing Nebraska seniors are going to play in one of the more prestigious all-star games this winter.

Steven M. Sipple: Chinander's crew made progress in 2019, but not nearly enough

Nebraska's defense made strides in some key areas this season, but those strides weren't nearly big enough to make much of a dent.

Ohio State and Wisconsin are at the top of Parker Gabriel's final Big Ten football power rankings. Where did Nebraska finish?

Nebraska captain Mohamed Barry shown in his final game with the Huskers on Nov. 29, 2019, at Memorial Stadium.