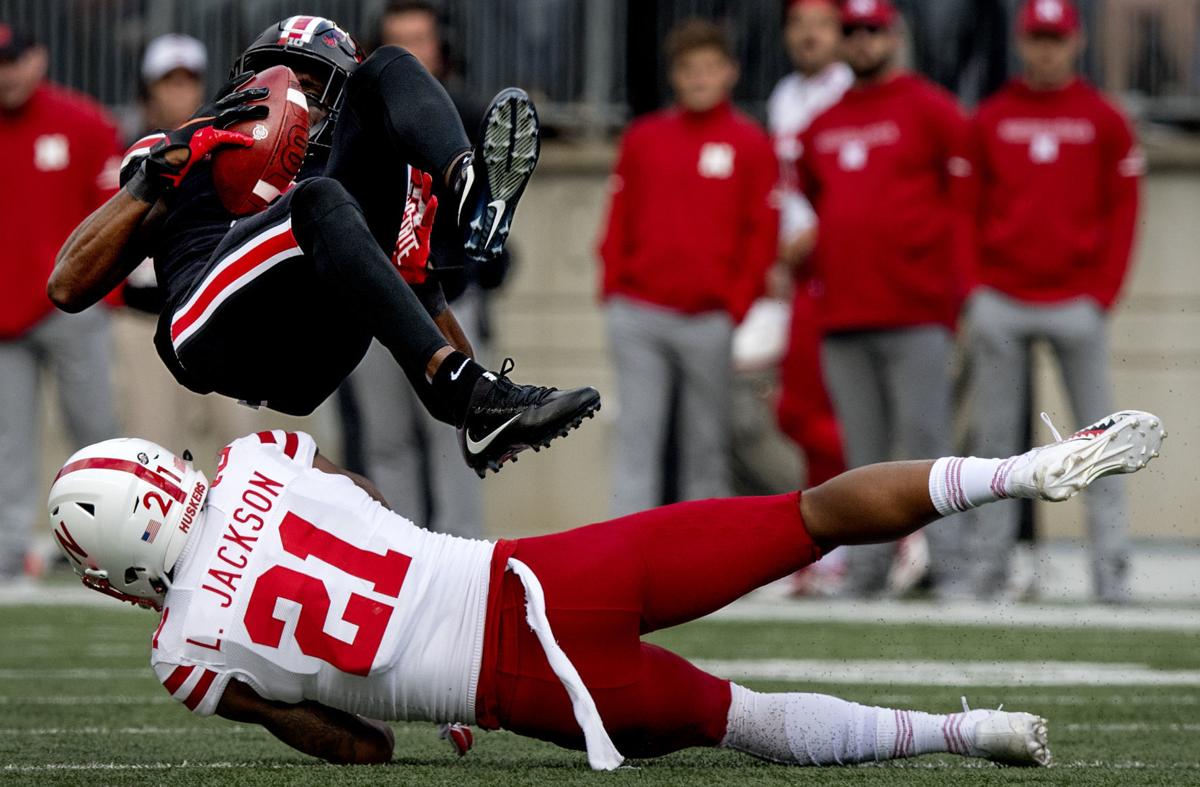 Nebraska defensive back Lamar Jackson (21) sends Ohio State's Binjimen Victor flying with a hit during a game in November in Columbus, Ohio. 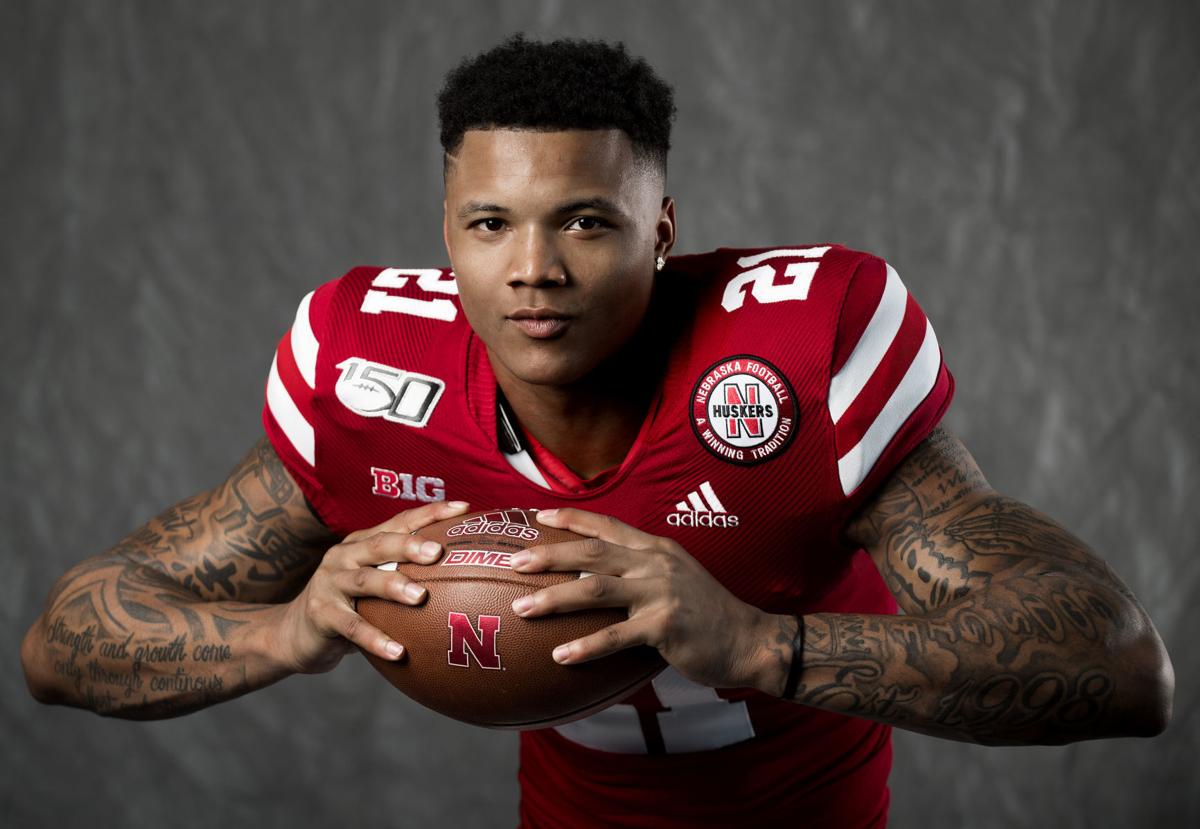 Lamar Jackson was benched a year ago and now he’s considered a team leader. The senior cornerback has had his share of ups and downs, but he has a chance to form a solid duo outside with junior Dicaprio Bootle.

The discussion sounded a bit peculiar in the context of Nebraska's significant defensive struggles last season.

When Husker senior cornerback Lamar Jackson was asked Thursday if the secondary was in the midst of "reloading" in the wake of key personnel losses at the safety position, his first words were, "No steps back." That's probably a good idea considering Nebraska's defense ranked 94th nationally in average yards allowed in 2018 and 78th in average passing yards allowed as the Huskers slid to 4-8.

Going backward in 2019 would be a problem.

But there's another part of the discussion that lends legitimacy to it. Nebraska returns both of its starting corners in Jackson and junior Dicaprio Bootle, who both enter this season with confidence gleaned from their strong play in 2018. That said, the 6-foot-3, 215-pound Jackson, who made a career-high seven pass breakups and recorded his first two career interceptions, sounds confident in the entire secondary.

"I feel like in the secondary room, we all kind of feed off each other," he said. "We have a lot of confidence, a lot of guys who want to play at the next level, a lot of guys who have their own personal motivators. And for the most part, I just feel everybody's grown up as people, as men."

Although Nebraska returns every corner from its 2018 roster, it loses three of the safeties from last season's four-man rotation in departed seniors Aaron Williams, Tre Neal and Antonio Reed.

"Everybody's just trying to recreate their destiny in a positive way and just make sure they do everything they can do on this football field to improve the team and to help themselves when it comes to the next level," Jackson said. "A lot of guys have NFL dreams, so I feel like that's one of our biggest motivators — to push each other and really make sure we give our best."

A native of Elk Grove, California, Jackson's NFL dreams are realistic. That's essentially what he heard from Nebraska head coach Scott Frost and defensive coordinator Erik Chinander the Sunday morning following NU's 42-28 home loss to Purdue on Sept. 29. Jackson was benched during that game for talking trash to the Boilermaker sideline and drawing a flag.

The message that Sunday from his coaches was along the lines of this: You have pro potential, so start acting like a pro. He responded well because he felt the coaches were on his side. Against then-No. 8 Ohio State in early November, Jackson made three tackles, recorded his second pick and forced a fumble that was recovered by the Huskers. He played some of the best football of his career down the stretch.

He evidently carried his momentum into spring drills. Secondary coach Travis Fisher said Jackson and safety Deontai Williams had the most interceptions during the spring. But Jackson isn't exactly resting on his laurels.

"It was a confidence-boost, yeah, but I feel like it's just natural," he said. "I mean, I'm trying to get picks. I want picks. But at the end of the day, that's practice."

"My coaches believe in me, my coaches are confident in me," Jackson said. "My teammates believe in me. But at the end of the day, I'm not the best in the country. I'm not leading the country in picks. Really, my biggest motivator is taking that from practice and putting it on the field this fall."

A stat by Pro Football Focus was floating around recently that was flattering to both Jackson and Bootle. Among Big Ten corners, Bootle ranked first last season in forced incompletion rate at 27.1%, while Jackson was third at 20.7%. That helps explain how Nebraska ranked 34th nationally in pass-efficiency defense.

Jackson is aware of the stats. But he falls back on a familiar refrain: He wants more. More from himself, and more from his team.

Most of all, he wants Nebraska to come up with more interceptions. It had 11 last season, with Williams also snaring two.

"I feel like I've got it figured out. Now, at this point, I've got to take all this stuff out of my head and put it on the field and display that for everybody in the world, just to set myself up for a great future, as well as (Bootle)."

He also throws the safeties into the conversation.

"If everybody does what they say they're going to do and do what they need to do, the numbers are going to speak for themselves. We are the best, because we can be. We hope we do that."

Held: Backfield inexperienced, but Huskers committed to 'get this thing right'

Running backs coach Ryan Held has a big challenge in front of him, but Held, he expressed confidence during a Thursday evening appearance on the "Sports Nightly" radio program.

Husker breakfast links: Good morning! The 2019 season is here, and so is our new feature

Fall camp is here, and so is our new feature, Husker Breakfast Links — a landing spot for some Husker quick hits and story/video links to star…

Consider this a refresher course. Or perhaps just a reminder. Bottom line, there are certain stats that are a better measure of Erik Chinander's defense than others because of the nature of Nebraska's offense.

Summer now in the rearview mirror, Huskers looking for 'toughness' as camp opens

Jack Stoll isn’t afraid to put Nebraska’s 2019 aspirations right out in the open.

If you asked any adult at Thursday's Nebraska Football Fan Day, you'd get a mixed bag of glowing praise and high expectations.

After JD Spielman, Nebraska has no shortage of question marks at the wide receiver position.

As the Nebraska football team takes a wait-and-see approach on the health of redshirt freshman Cameron Jurgens, it will be Will Farniok gettin…

Nebraska checked in as the first team outside the preseason Amway coaches poll, compiled by USA Today.

Head coach Scott Frost said Thursday that, while this is not yet a formalized Unity Council like the one that prevailed during his playing days, the Huskers continue to move in that direction as his second preseason camp gets underway.

Steven M. Sipple: As Frost's players toil in August, they should know he was weight-room freak

Steven M. Sipple: Duval is a bit of a mystery man, but his role in Frost's grand plan is clear

Nebraska head strength coach Zach Duval eschews media interviews. But we're getting a better feel for his style. "He has these expectations of you," Matt Farniok says. "You don't want to fail for him. You want to meet his expectations so it's kind of a constant grind of like, 'He knows I can do this, so I've got to do this.' It's just kind of a cool way to do it."

Good morning! Yeah, it's Monday, we know the feeling. But the media gets access to the Huskers after practice today and we're that much closer…

Red Report: Domann not yet cleared for camp; WR Robinson 'a problem' for defense; Fisher insights

Husker OLB coach Dewitt lost 102 pounds during cancer battle, but he's back to work and loving it

Nebraska outside linebacker coach Jovan Dewitt lost 102 pounds while battling throat cancer earlier this year, but he's back on the practice field for the Huskers and feeling "95 percent," he told reporters Monday.

Nebraska defensive back Lamar Jackson (21) sends Ohio State's Binjimen Victor flying with a hit during a game in November in Columbus, Ohio.

Lamar Jackson was benched a year ago and now he’s considered a team leader. The senior cornerback has had his share of ups and downs, but he has a chance to form a solid duo outside with junior Dicaprio Bootle.