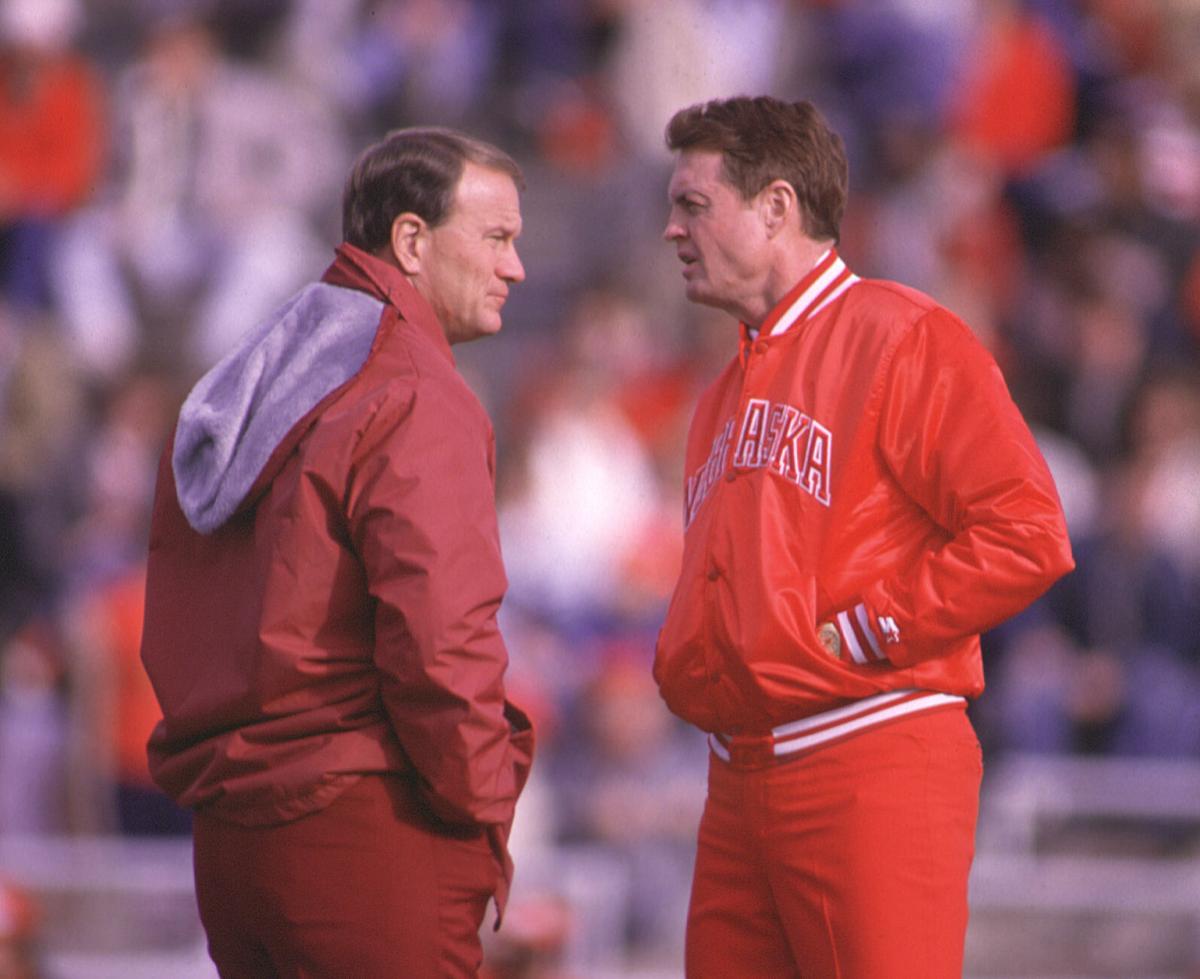 Tom Osborne talks with Oklahoma Coach Barry Switzer before the 1985 game between the two schools. Osborne and Switzer came into the Big Eight conference the same year. 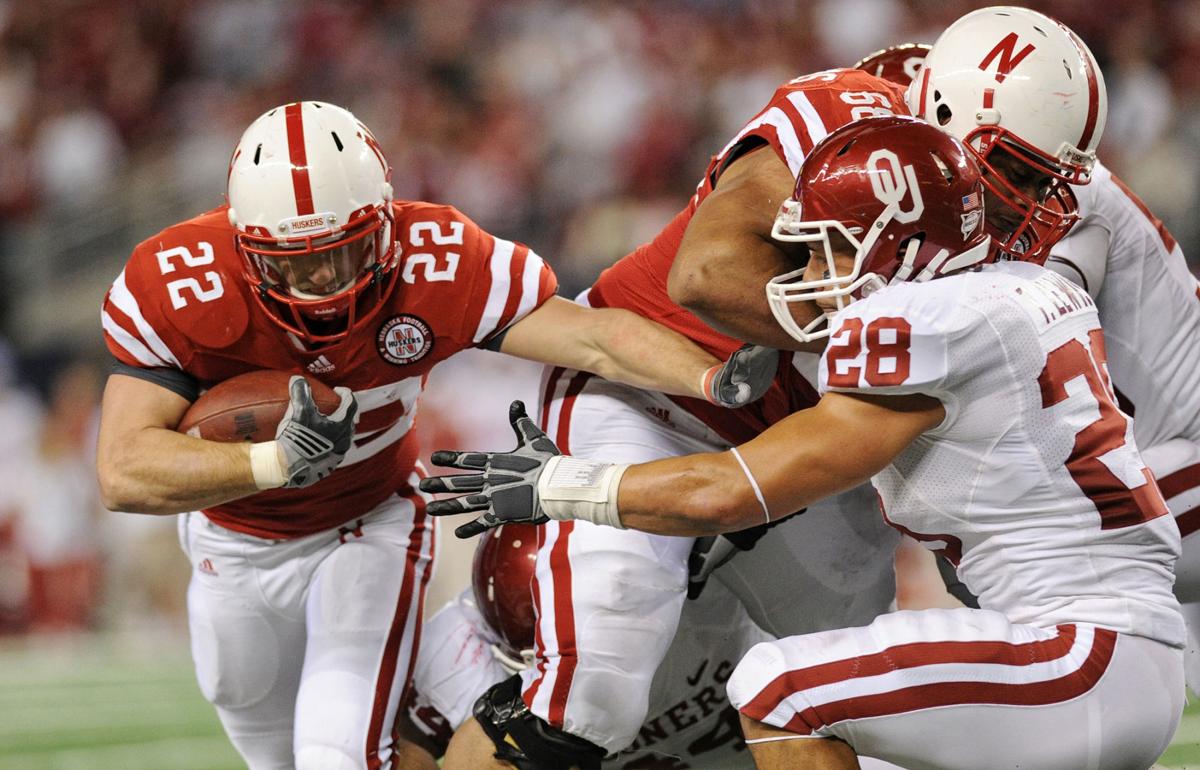 The last time Nebraska and Oklahoma met, Rex Burkhead (22) and the Huskers were trying to knock off the Sooners in the 2010 Big 12 title game.

Tom Osborne won't be in Norman this weekend.

As Nebraska and Oklahoma gather to celebrate all the characters who played a role in the 1971 "Game of the Century" and built the rivalry into one of the richest in college football before meeting once again on the field, Osborne will watch on television from Lincoln.

"And try not to throw anything at the TV set," he joked this week.

In his own understated way, Osborne said he had planned to attend the game in person before other obligations kept him in Lincoln. He'll probably see the game better on TV anyway, he said.

But the man who helped sew the tapestry of the rivalry will still watch knowing his fingerprints are on the matchup even now.

When toe meets leather shortly after 11 a.m. Saturday, it will mark the renewal of a matchup that hasn't been played since 2010, and the culmination of an effort spearheaded by Osborne and Oklahoma athletic director Joe Castiglione in 2012 when Osborne was still Nebraska's AD.

It was so natural, such a no-brainer, that the two schools engaged in perhaps the least stressful negotiation process in college football history.

"It was just a matter of two or three emails, or whatever," Osborne said. "and Joe Castiglione and I are good friends, and we'd been in the Big 12 meetings together; I always admired Joe and he's a very easy guy to get along with."

A few things have changed, of course.

Castiglione is still at OU. Nebraska, since 2012, is on its third athletic director and second football coach. The programs, certainly, have gone in opposite directions in the years since the games were scheduled. And that's without getting into Nebraska's efforts this summer to try and get out of the game.

Much of that will be forgotten by Saturday. Whatever may or may not happen on the field will largely take place in the shadow of the larger celebration surrounding the action. Many of the key participants from 1971 will be in Norman for various gatherings, and will be recognized by those with an appreciation for college football history.

The nostalgia will be there, at least in part, for Osborne. But not in a way that perhaps gets his fire burning white-hot like it did when he was butting heads with Barry Switzer when the two were first offensive coordinators at their schools before moving in to the head jobs.

"A lot of things have changed," Osborne said. "But I think still to the fans, some of the older fans, it does have meaning and purpose, and brings back a lot of memories.

"So probably for us older folks it does have some significance."

The significance was clear in 1971. Nebraska was already going to the Orange Bowl. Oklahoma was headed to the Sugar Bowl thanks to the way bowl game spots were negotiated then.

It was just a matter of which team would win and become the heavy favorite to win the national title, and go down as one of the great teams in college football history to that point.

Osborne said being able to get the teams back on the field to commemorate that day was important.

"And with the fragmentation of the conferences and so many people going different directions, it maybe has a little bit special meaning because it’s pretty unlikely that Nebraska and Oklahoma will ever be in the same conference again," Osborne said.

Perhaps, in years past, there was hope NU and OU could once again clash on a yearly basis. But with Oklahoma's move to the SEC, those titanic Big Eight matchups will have to live on in memories.

"It looks like now, that’s pretty much done," Osborne said. "If not forever, at least for a long, long time."

Photos: Take in all of the sights from Memorial Stadium, where Nebraska hosts Buffalo

Game On: Storylines, players and matchups to watch (and a prediction) for Huskers vs. Sooners

Time to level up. Parker Gabriel takes a closer look at how the Huskers and Sooners line up: Storylines, keys, head-turning stats, predictions.

NU not interested in underdog card as OU looms: 'What type of team would we be if we didn't believe?'

The Huskers are more than three-touchdown underdogs, but they aren't wild about playing the nobody-believes-in-us tune. In fact, they're excited.

Steven M. Sipple: He (still) could use more help, but Martinez isn’t one to complain at all

Nebraska's O-line is off to a slow start through three games, arguably the team’s biggest concern. Just Martinez’s luck. But he stays confident.

Nebraska-Oklahoma pregame observations: Could NU be closer to full strength vs. OU?

Tom Osborne talks with Oklahoma Coach Barry Switzer before the 1985 game between the two schools. Osborne and Switzer came into the Big Eight conference the same year.

The last time Nebraska and Oklahoma met, Rex Burkhead (22) and the Huskers were trying to knock off the Sooners in the 2010 Big 12 title game.