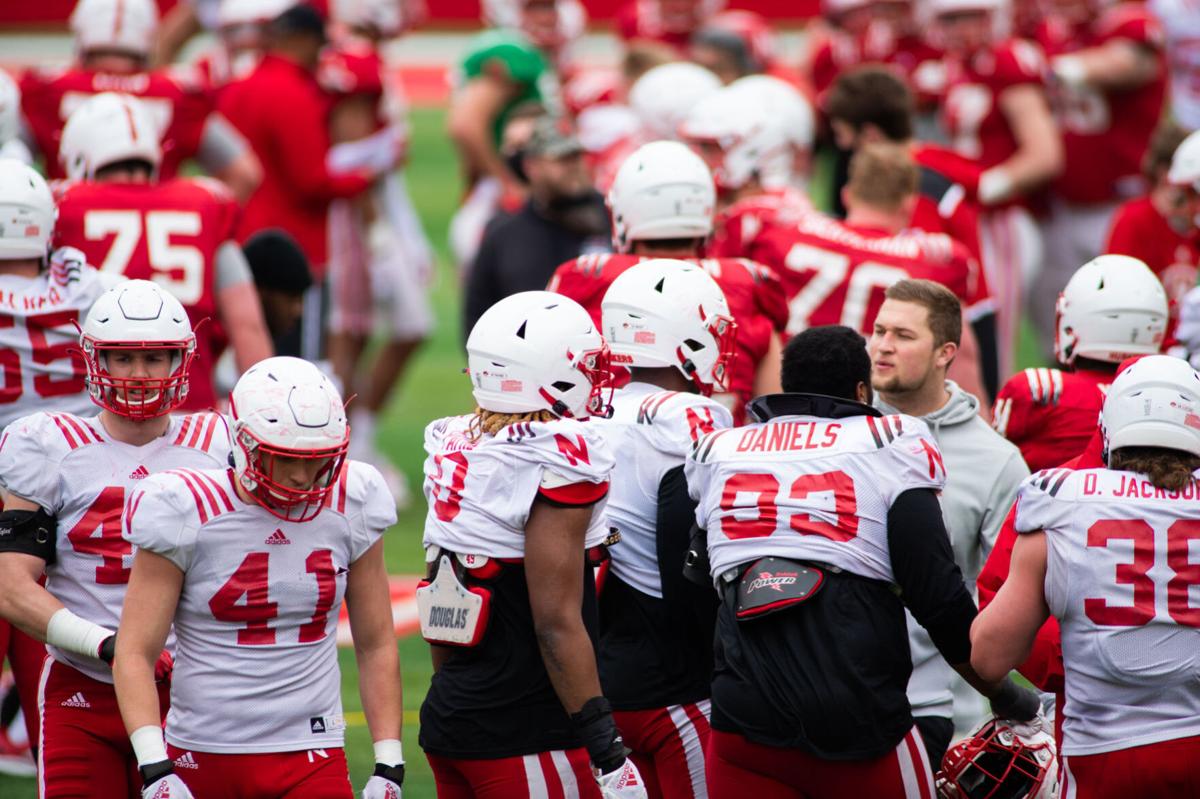 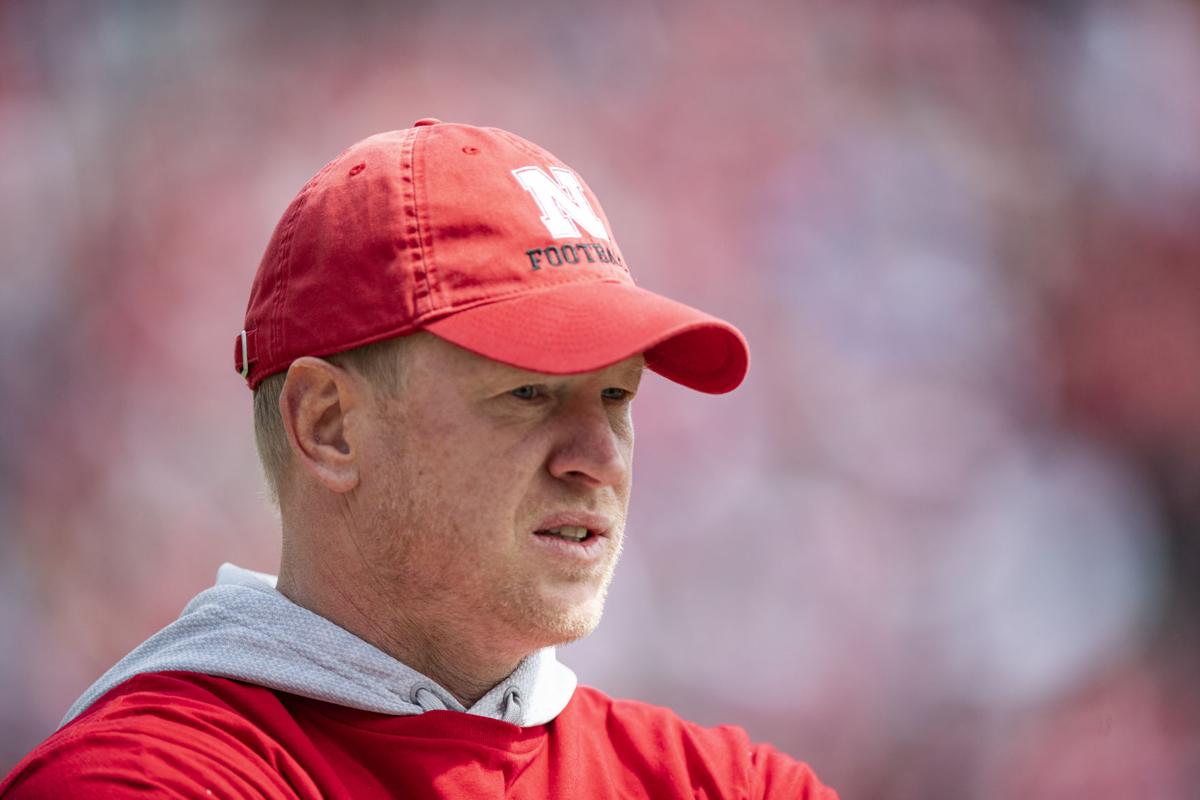 Nebraska football coach Scott Frost watches the first half of the Red-White Spring Game on April 13, 2019, at Memorial Stadium.

Nebraska is set to play a full 60 minutes on Saturday for its Red-White Spring Game, but the format is going to look different from a normal contest in several ways.

Most notable: The first half will not include any live tackling, but the second half will.

Coach Scott Frost on Wednesday indicated that’s essentially the compromise the staff reached after batting around several ideas, including holding several veteran players out or to very limited roles altogether.

“It’s going to give us a chance to get more work out of our veterans and then gets some live reps for our young guys.”

Nebraska is being cautious in how it approaches the final of 15 spring practices because Frost said his team overall is "beat up" at the end of a long, taxing five-week stretch.

“We’ve had a couple times up to 43 guys on our injury list with everything from a couple big ones to tweaks and sprains and bumps and bruises. We’re a little beat up, but we expected that with the type of spring that we’ve had.”

Watch now: Will the Huskers pursue a QB in the transfer portal?

That eye-popping number would represent 31.3% of Nebraska’s 137-man spring roster. Still, the coaching staff wanted to give some of the veteran players a chance to get out and get some work in front of a crowd that is expected to be more than 30,000 at Memorial Stadium.

“I imagine most of the veterans will play the first half now that it’s not tackle,” Frost said. “It’s going to be practice tempo and we’ll trust the referees to blow it down at their discretion. That’s going to give us an opportunity to let some of the veterans play a little bit more.”

Fans are always excited to see how players look, but it isn’t a particularly useful day from an evaluation standpoint for the coaching staff. Or at least no more so than any other day.

“About the same as every other practice, maybe less. This is kind of a showcase,” Frost said. “The only thing we’re really looking to see is how they perform when the lights are on a little bit. But we have hundreds and hundreds of reps of practice that we can evaluate and a lot of those veteran guys are going to get 30-50 reps in the first half of Saturday’s game, so that’s a small portion of what the work they’ve put in this spring. It’s important, but it’s no more important than any other practice that we’ve had.”

Another difference: Coordinators Matt Lubick (offense) and Erik Chinander (defense) are going to call plays for both teams from the coaches’ boxes high above the field. In years’ past, Frost has spread around the play-calling duties for the spring game.

Photos: What a Husker football practice (with fans!) looks like

The project, which carried an initial price tag of $155 million, was delayed by almost exactly a calendar year due to the coronavirus pandemic.

Former Husker star Harry Tolly wasn't only a QB; he confounded Sooners in '59 as DB as well

Harry Tolly led the Nebraska football program to one of its greatest upsets, a 25-21 win against Oklahoma in 1959. He died last week at age 83.

As a veteran Husker but one who's gone under the radar, Deontre Thomas is looking to solidify a role on the Nebraska defensive line.

The charter member of Nebraska’s 2023 class is Pierce tight end Benjamin Brahmer, who has already garnered rave reviews for his athleticism an…

Late last month, Bill Moos was listed as a preliminary candidate for the Pac-12 commissioner vacancy in a San Jose Mercury News report.

The Red-White Spring Game rosters are set. Check them out here

Adrian Martinez and Matt Masker on the Red Team. Logan Smothers and Heinrich Haarberg on the White. Here's a full look at the rosters.

A list of recruits who the Journal Star has confirmed plan to attend the spring game and a bit about each.

Saturday's Red-White Spring Game is the first event that will bring large numbers of customers back for drinks or to watch Husker football since the coronavirus pandemic hit last March.

Well-traveled Shamiel Stevenson on the move from Nebraska basketball, will turn pro

The 6-foot-6, 245-pound guard will leave the Nebraska men's basketball team after two seasons to pursue a professional career.

Veterans to watch? Fresh faces to watch? Your offensive guide to the Red-White Spring Game

Whether you're going to Memorial Stadium, or watching on TV, we list some names to circle on your copy of the spring game roster.

If you're not at the stadium — or, even if you are — kick back and follow along with us.

Nebraska football coach Scott Frost watches the first half of the Red-White Spring Game on April 13, 2019, at Memorial Stadium.