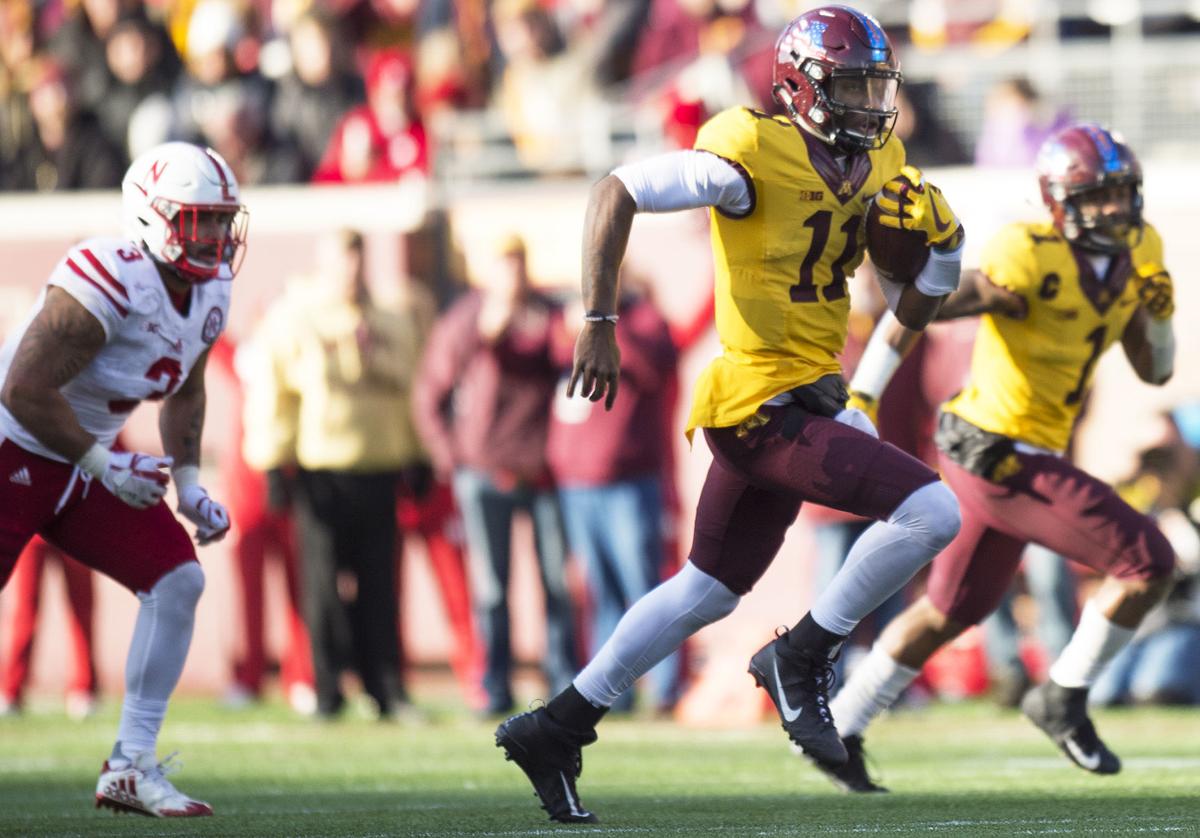 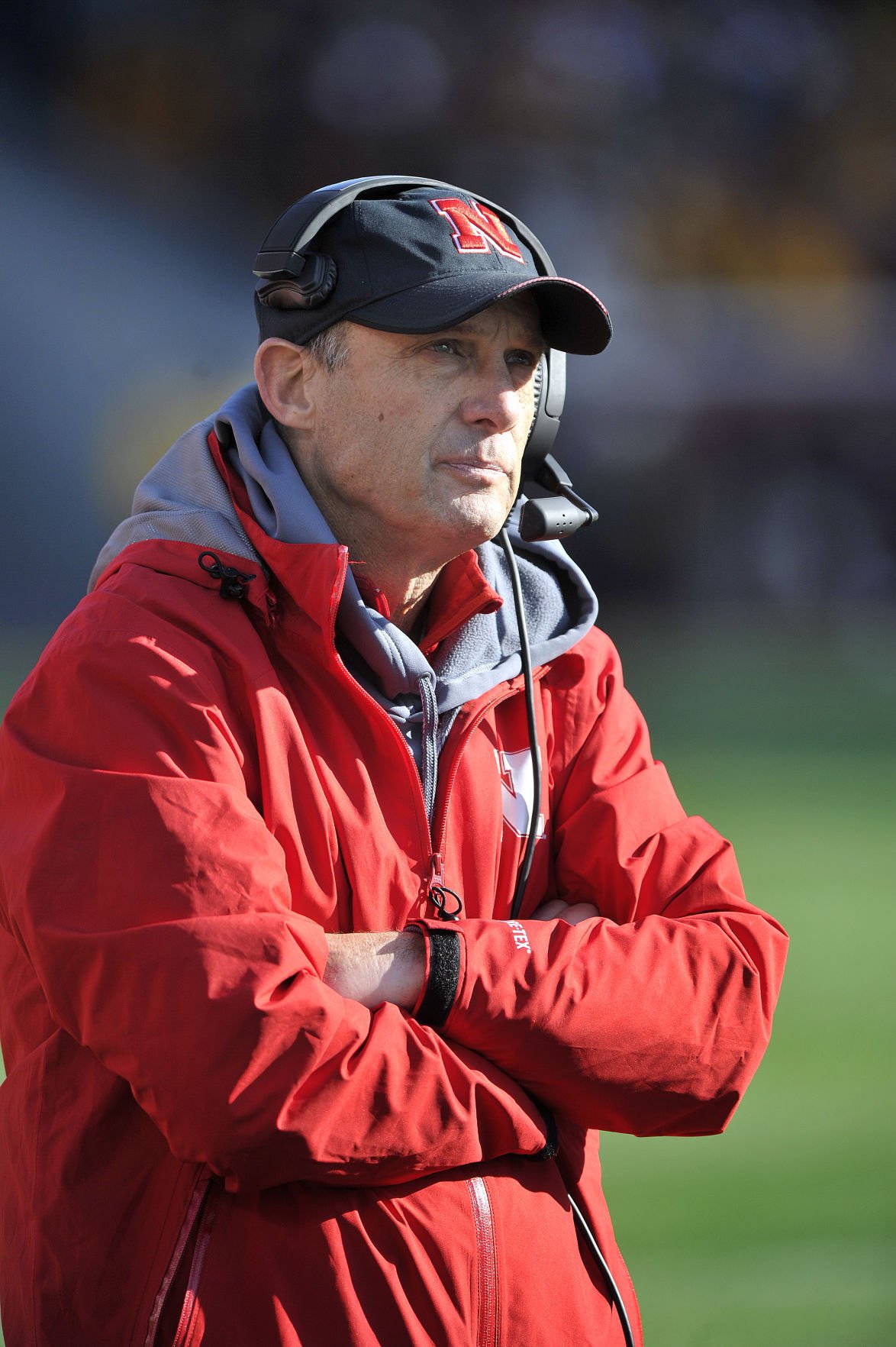 Nebraska coach Mike Riley walks the sideline during the third quarter of Saturday's game against Minnesota at TCF Bank Stadium in Minneapolis. 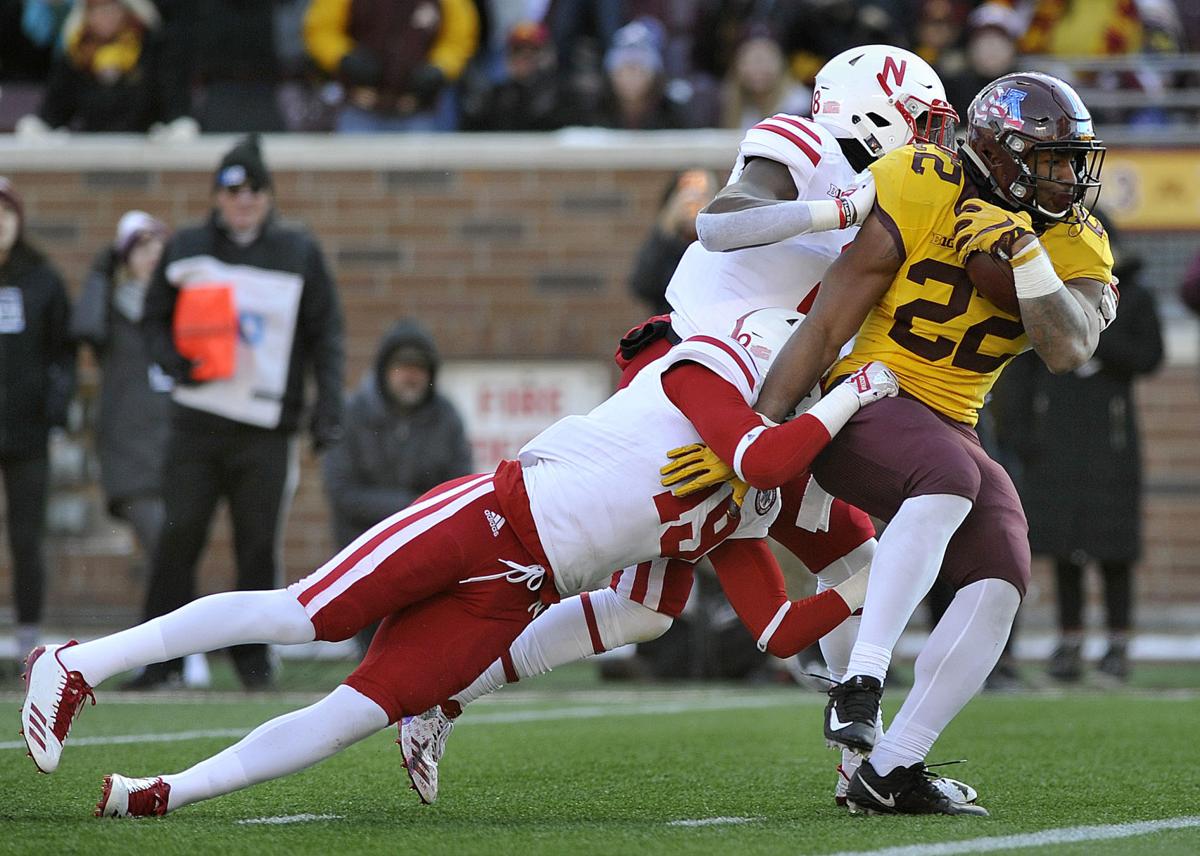 Minnesota's Kobe McCrary drags Nebraska's Marquel Dismuke (19) and Chris Jones into the end zone to score a touchdown in the third quarter Saturday at TCF Bank Stadium in Minneapolis.

MINNEAPOLIS — As Nebraska began its preparations for Minnesota on Monday, senior linebacker Chris Weber said qualifying for and playing in a bowl game "would mean everything" to him.

Redshirt junior quarterback Tanner Lee said finishing the season on a strong note and earning seniors like Weber one more game would be a "huge motivating factor" for he and his teammates.

Instead of playing like a team motivated to lengthen its season, though, Nebraska looked on Saturday like a team without direction and headed for an ugly end.

Weber, limited by a neck stinger suffered last week that temporarily left him without feeling and sapped the strength in his left shoulder, watched from the sideline early on as Minnesota’s offense marched up and down the TCF Bank Stadium turf.

Lee, whose day ended at halftime due to an "impact migraine," played well but could not lift his team out of its quickening tailspin.

P.J. Fleck’s Gophers simply dominated. These teams entered with the same record, but finished looking like programs headed in opposite directions after a 54-21 blowout.

It is the second time this season the Huskers have given up at least that many points and leaves the team at 4-6 overall and 3-4 in Big Ten play.

Head coach Mike Riley insisted after the game that his team did not quit.

"I think there’s a lot of disappointment, and disappointment drags you down," he said. "It might look like quit, but I think in the description of this team and how they react, that they’re just really disappointed in how it’s going. You do everything you can on the boundary to rally that and we could just never get it back to the point where we made a dent that way."

Minnesota entered Saturday averaging 150.8 rushing yards in Big Ten play and with five rushing touchdowns in its first six league games, of which it won one. The Gophers had scored a total of 44 points their past three games.

Against the Huskers, they rolled up 409 rushing yards, six rushing touchdowns and 514 total yards of offense.

Senior running back Rodney Smith returned the opening kickoff 100 yards for a touchdown and then the Gophers scored on eight of their 10 offensive possessions before killing the afternoon’s final 4 seconds with a kneel-down.

They rushed for 238 yards (10.8 per carry) in the first half, including a 73-yard scoring scamper by sophomore quarterback Demry Croft, who entered the afternoon with 154 rushing yards in seven games.

He more than doubled his season rushing total against a listless Husker defense, rolling up 183, a school record for UM quarterbacks. Croft added touchdown runs of 1 and 3 yards for a three-score day.

The Huskers simply could not slow UM’s read-option attack. Playing without junior safety Aaron Williams, NU rotated junior Antonio Reed and redshirt freshman Marquel Dismuke opposite senior Joshua Kalu. When Croft would pull the ball and get to the edge, the quarterback often only had one man to beat.

"We structurally had a player responsible for the pull, who had a hard time with it," defensive coordinator Bob Diaco said.

In addition to the opening return, Smith cracked the 100-yard rushing mark in the third quarter and finished with 134, while fellow senior Kobe McCrary finished with 93 and three scores of his own.

"It started bad and went from there," Riley said.

"We couldn’t fix the things in the second half that were hurting us in the first," sophomore defensive lineman Carlos Davis added. "That played a big factor in the score. … We had a defensive plan and it didn’t seem to work. That’s about it."

Davis was asked if the defense still had faith in Diaco, given that the plan did not work and also considering the comments the first-year coordinator has made over the past week.

"He’s a leader," Davis said. "You’ve got to listen to your leader, and we’re going to do that and ride out the season."

Lee led a scoring drive on NU’s first chance as the Huskers tied the game on a 1-yard Mikale Wilbon touchdown run. That was the Huskers’ first rushing touchdown since the second quarter of a Sept. 29 win over Illinois, snapping a span of 286 minutes, 41 seconds.

The Gophers struck back with a 75-yard scoring drive to take a 14-7 lead on Croft’s first touchdown, but NU drove 68 yards to the Minnesota 7 before turning the ball over on downs.

That was the last time it felt like the Huskers had the Gophers within reach.

Without Lee in the second half, the NU offense could mount no counterpunch. Instead, Minnesota continued running the ball and continued scoring.

Just before junior Minnesota kicker Emmit Carpenter added his third field goal of the day and extended the Gophers’ lead to 40-14 late in the third quarter, senior kicker Drew Brown sat alone on a warming bench at the far end of NU’s sideline, with his hands across his white jersey.

It must have been a bitter feeling for Brown and his teammates. In a season where several times Riley’s team seemed to hit a low point — 42 points given up in the first half against Oregon, a home loss to Northern Illinois, decimation at the hands of Ohio State, an overtime defeat last week to Northwestern — this moved the bar even lower.

"We’ve got some more games, and we can beat these two and go to a bowl game. That’s what matters. Our coaches are competitors, and I have faith in them. They did their part to get us ready, and we have to execute at the end of the day.

The Gophers entered the game 1-5 in Big Ten play, with only a seven-point home win over hapless Illinois in the conference win column. They had not scored more than 27 points in league play — that came in a three-point loss to Michigan State in mid-October. But UM rolled all afternoon against a defensive system that first-year coordinator Bob Diaco said Tuesday he needs at least a full year with in order to mold it into “one of the best defenses in the country.”

“Here’s what happened: They moved the football and we couldn’t get them off the field,” Riley said. “I know that the score indicates that we didn’t (match UM’s intensity) and I know that we probably got set back on our heels a little bit — a lot — with the opening kickoff, but like I said then, we responded.

“But we never got our feet on the ground at any time that I can remember, defensively.”

The loss makes it increasingly likely that the Huskers will not qualify for a bowl game for the first time since 2007 and that they have just two games — at Penn State and home against Iowa — remaining this fall. They figure to be substantial underdogs in both contests.

“Right now you have to inherently rely on the character of the people around you,” Riley said. “The players and the coaches. It sounds like a broken record, but the coaches will get together a plan and prepare. The players will have to call upon whatever their own personal pride to do the right thing.

“Whether or not their lights have been on all the way, whatever that is or the opinion is of what it looked like today, these are good kids.”

Nebraska's defense is giving up 412 yards per game, which sits at No. 2 on the all-time school charts in terms of yards allowed. Two of the worst three seasons, defensively, have come under Mike Riley.

The Scene: Rick Spielman doesn't have to travel far to get up-close look at his son

MINNEAPOLIS — Forget "strain." Forget, "It takes time." Forget all the ribbing Bob Diaco has taken for his defense’s play on the field and the…

Record-breaking Spielman strong again as numbers continue to pile up

MINNEAPOLIS — It was only going to be a matter of time, but JD Spielman got the work out of the way quickly Saturday.

Lest there were lingering doubts about new Nebraska athletic director Bill Moos' decision regarding Mike Riley's future at the school, all questions seemingly were answered in this game, right?

MINNEAPOLIS — No matter how ugly Nebraska’s loss to Minnesota on Saturday got as the second half progressed, it would be hard to blame redshir…

Folks wondered if new Nebraska athletic director Bill Moos might pull the plug on Mike Riley's tenure as Husker football coach, such was the dramatic nature of a 54-21 loss Saturday at Minnesota. Turns out, there was no news conference. We heard only silence. In that silence, a vision became increasingly clear.

Nebraska coach Mike Riley walks the sideline during the third quarter of Saturday's game against Minnesota at TCF Bank Stadium in Minneapolis.

Minnesota's Kobe McCrary drags Nebraska's Marquel Dismuke (19) and Chris Jones into the end zone to score a touchdown in the third quarter Saturday at TCF Bank Stadium in Minneapolis.