Subscribe
Read Today's E-Edition
Share This
Game of the Century resonates with many, but most Husker players unfamiliar with history of NU/OU rivalry
0 Comments
Share this 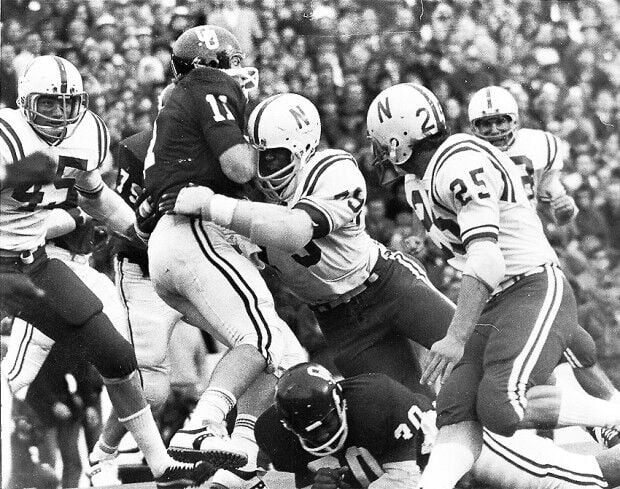 Nebraska defensive tackle Rich Glover makes a tackle against Oklahoma in the Game of the Century in 1971. 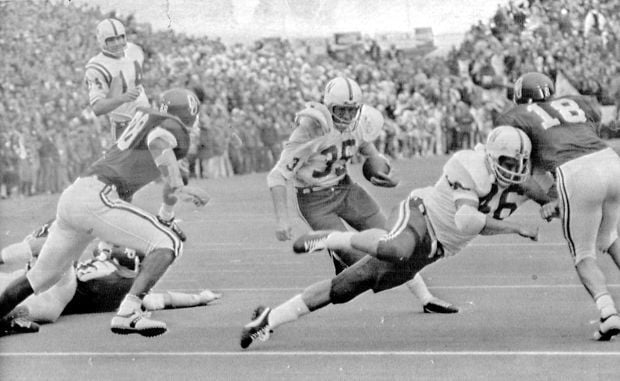 Nebraska's Jeff Kinney (35) gets a block from fullback Maury Damkroger (46) as he scores from the 2-yard-line with 1:38 left in the 1971 "Game of the Century" at Norman, Okla. Kinney scored on the handoff from quarterback Jerry Tagge (left) to cap a 74-yard drive in 12 plays in Nebraska's 35-31 victory.

The thing with the Game of the Century, of course, is that it happened last century.

The 1971 classic between Nebraska and Oklahoma lives in college football lore for those who follow the game closely and study its history intently.

But for guys born in the new century — also known as pretty much everyone on Nebraska's roster — the rivalry and the games that defined it live well in the past. The teams haven't met since most of NU's players were around 10 years old.

Saturday's matchup between the Huskers and Sooners, while being a national stage for both teams, is more for the parents and the grandparents than the players.

By the time he really started watching college football, Reimer said, Nebraska was in the Big Ten and the series with the Sooners was dissolved.

While that might make fans of a certain vintage wince a little, that's the reality of Saturday's game. Nebraska knows it will see a top-five opponent on the road. The Huskers know they have an opportunity, as a three-score underdog, to manufacture a shocking upset and potentially change the narrative of their season.

But outside of that, the celebrations surrounding the game will amount to little more than a lesson in college football history for Nebraska's players.

"You know, I don’t remember at all because I was a little baby. I know it’s a huge rivalry, I know that," said sophomore linebacker Garrett Nelson (born in 2000). "I mean, it's a nameless, faceless opponent every week. We treat every game like it’s the Super Bowl, prepare like it’s the Super Bowl. The whole cliché deal. We need to focus on us and what we need to do and the rest will take care of itself."

Brant Banks didn't exactly grow up an Oklahoma fan, as the NU offensive lineman (born in 2000) lived in Texas. But he also didn't know much about Nebraska either, before being recruited by, and eventually signing with, the Huskers.

"Especially now seeing them, now that I'm at Nebraska, they're just like any other team," Banks said. "It's a nameless, faceless opponent. We have to go out there and do what we have to do, and that's the way we're going to win."

That doesn't lessen the importance of the game in Banks' eyes. He's heard about the rivalry from his father. But his words paired with Nelson's illustrate the approach NU is taking this week: it's not Oklahoma. It's just the next game on the schedule.

Four Downs: The 'line of the day' as Huskers talk Sooners, and three more notes

"I'm excited to bring it back," Banks said. "And hopefully we can go out there and show what we can do against a big opponent.

Adrian Martinez is in the group of players who gets into the history of the game. A self-described "college football junkie", Martinez devours documentaries about the game and seems to understand the place the NU/OU rivalry holds in the bigger picture of college football.

"It means a tremendous amount to the fans, and to us as players to be a part of this rivalry," Martinez said. "It's the stuff I grew up wanting to be a part of, simple as that. I'm from California, and I knew about the Oklahoma/Nebraska rivalry. It's big, and I'm excited to finally be a part of it."

That history includes NU coach Scott Frost, who was the Huskers' quarterback for the two most lopsided whippings in the history of the series: 73-21 in 1996, and 69-7 in 1997. Before that, he was driving to games with his parents.

"I remember coming to a bunch of them. Driving from O'Neill and being here in Lincoln, or driving from McCook to come see the games; going to games around Thanksgiving when I was a little boy was a special deal," Frost said. "So I've seen a lot of them, been a part of a lot of them."

Now Frost the coach, still searching for the spark he hopes will light his alma mater's flame once again, will man the sidelines.

"This was my favorite game of the year growing up, my entire life. Just like every Nebraska fan, I think," Frost said. "and I was lucky enough to play in two of them.

"One of the best rivalries in sports. It's kind of a shame it went away, but it's going to be special to be a part of it in a different role."

Watch now: Take a listen to what Scott Frost and the Huskers are saying as Oklahoma week begins

Watch now: Luke Reimer discusses how he will prepare for Oklahoma

Watch now: Samori Toure asks, 'What kind of team would we be?' if Huskers didn't believe they could beat OU

Four Downs: The 'line of the day' as Huskers talk Sooners, and three more notes

Watch now: Adrian Martinez on NU-OU: 'I'm from California and I knew about the rivalry'

Watch now: Turner Corcoran not satisfied with his play this season

Photos: Take in all of the sights from Memorial Stadium, where Nebraska hosts Buffalo

A look at how Husker recruits and prospects are doing on the prep gridiron, beginning with McQueen's Ashton Hayes' ground attack.

The Word with Garrett Snodgrass: How the family business drives the York native in football

From working on the farm to watching his dad coach the Dukes, Snodgrass' heart and passion lies in the Midwest way of life.

How does Nebraska get its run game going? And just how much has freshman OL Prochazka put himself in the mix?

Scott Frost described in detail why the run game is a "group effort." Some nuts-and-bolts talk there. As for Prochazka, he's "in the conversation."

Steven M. Sipple: Frost gets point across on bad call and other takeaways from NU luncheon

Coaches all over America might do well to take note of how Scott Frost handled a question about his team's offensive pass-interference penalties.

Red Report: Frost's two-letter response to injury question; the Grinch; how Toure stepped in on punts

Out by the end of Saturday's game: Allen, Manning, Vokolek, Martin, Betts. "Those are some of our most talented skill guys and we need them back."

Nebraska will play under the lights for the first time this season when it travels to East Lansing.

Ryan Held has given each of his top three running backs a chance early in a game, then deciding how to distribute carries from there.

After an impressive start for Iowa, and a stumble in the road for Ohio State, there is some movement atop Parker Gabriel's weekly league rankings.

'What he's doing is special': Huskers getting big plays in multiple ways from QB Martinez

Adrian Martinez is throwing 60-yard touchdown passes and breaking off 70-yard runs. Here's a closer look at his big-play dynamic so far in 2021.

From rivalry to respect: 'The whole world converged on Norman, Okla., that week'

“It still matters, it just depends on your age. If you’re looking at 18- to 30-year-olds now, it's about the dread of getting blown off the field, not a long rivalry," Hail Varsity radio host Chris Schmidt said.

Steve Glenn began putting together Nebraska road game travel packages when he started Executive Travel 35 years ago and took some very large Husker contingents to the most memorable games of the '80s, '90s and early 2000s.

Rich Glover is returning. An 800-mile drive from his home in Snellville, Georgia, to Owen Field in Norman.

Nebraska defensive tackle Rich Glover makes a tackle against Oklahoma in the Game of the Century in 1971.

Nebraska's Jeff Kinney (35) gets a block from fullback Maury Damkroger (46) as he scores from the 2-yard-line with 1:38 left in the 1971 "Game of the Century" at Norman, Okla. Kinney scored on the handoff from quarterback Jerry Tagge (left) to cap a 74-yard drive in 12 plays in Nebraska's 35-31 victory.