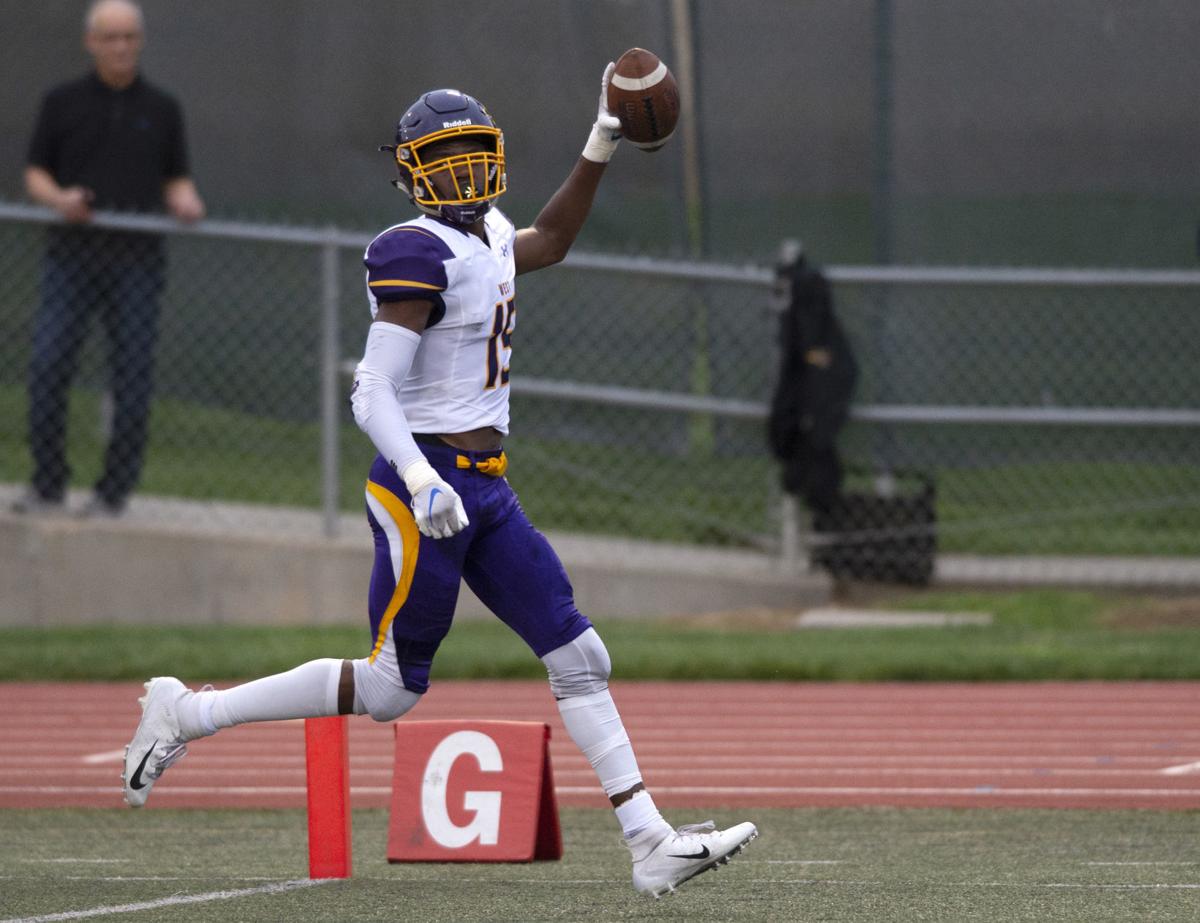 Bellevue West's Zavier Betts scores a touchdown against Lincoln High on Aug. 30 at Beechner Field. Betts is one of 14 players who have verbally committed to Nebraska in the 2020 class. 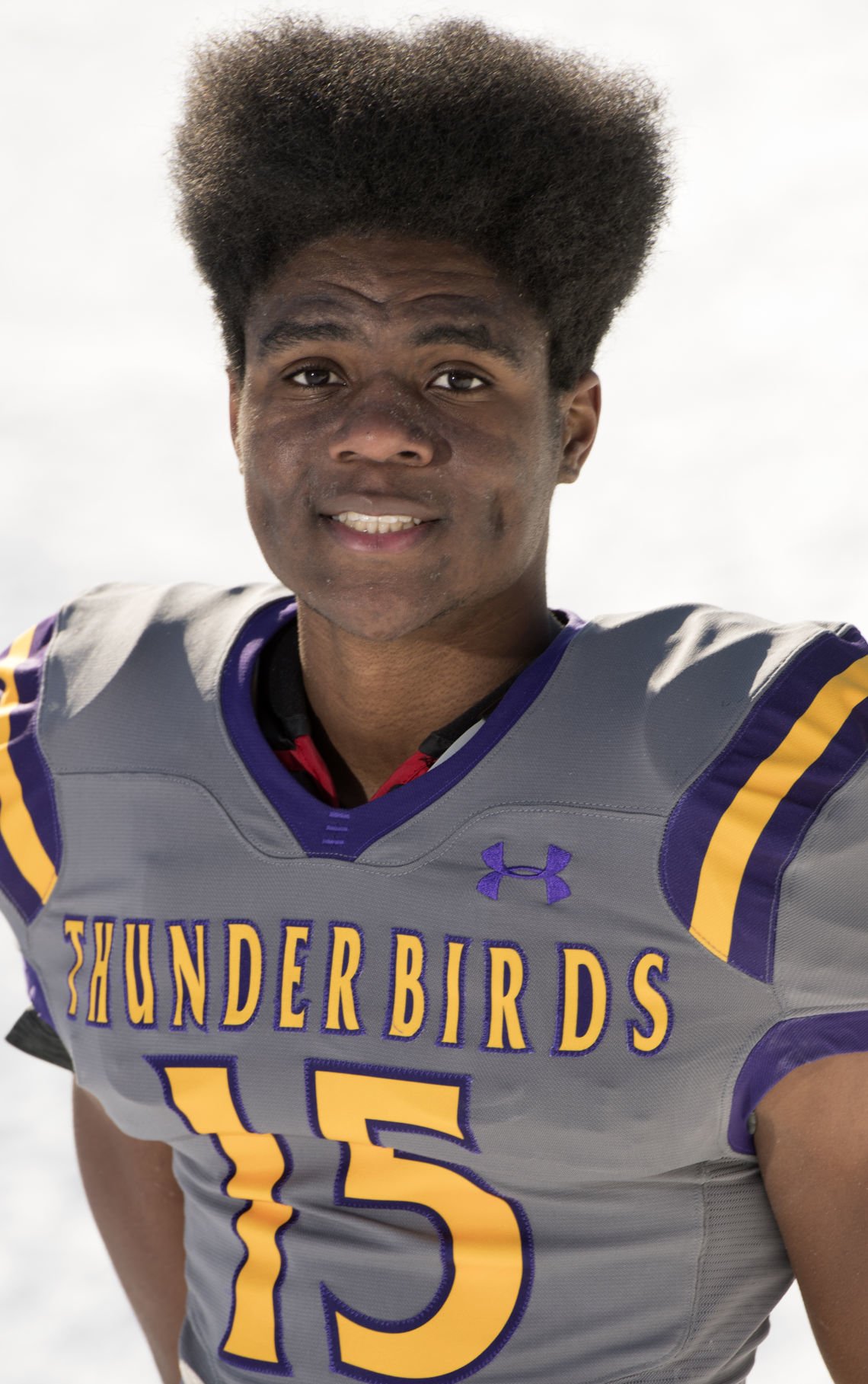 City profile: Bellevue has a population of approximately 53,000 and is about one hour from Lincoln.

Players to play NCAA Division I in the past seven years: 7.

Number of players out for football: 110 in high school.

This week: Betts will be playing in Lincoln this week as Class A top-ranked Bellevue West (4-0) travels to play at Lincoln Pius X at 7 p.m. Friday.

Season stats: An impressive seven of Betts’ 19 receptions have been touchdowns, and he has 526 yards receiving.

Rankings: Rivals.com ranks Betts as a four-star prospect and the No. 1-ranked player in Nebraska. He committed to Nebraska on April 3.

On our radar: “Zavier played for a local team here in eighth grade coached by Clester Johnson. Clester is obviously one of our better alumni here from Bellevue West who played in the early ’90s and went on to Nebraska and won a couple of national titles. He settled back in Bellevue after college and also coached some youth football. So when Zavier was coming up through, Clester said, ‘Hey, man, I think we got a pretty special kid.’ And knowing Clester for a long time he doesn’t really sugarcoat a whole lot. He’s not one of those guys to embellish kids’ abilities. So we knew when he said we got something special coming that we had something special coming. And that turned out to be pretty accurate. The kid started the last one-third of the state championship season in 2016 as a freshman. There are freshmen that play on varsity, but there are not very many freshmen that start on varsity when you’re talking about teams that are playing for state championships.”

The best play I’ve seen him make in a game: “There is a couple. We had a play at Omaha Burke (in 2017) where we’re going vertical down the left sideline and the quarterback threw it behind him and somehow he’s able to come out of a dead sprint, plant off his inside foot, turn his body outside, lay out and catch a ball, which I still don’t know how he caught it. But I honestly think it was just this last week we had a third-and-17 against Elkhorn South and we ran our double-dig concept. And basically you’re going to get drilled. We’re going to get the first down if you catch the ball, and in the past he’s dropped it. And he got hit by two guys and held on to it and we converted a third-and-17 against the (No. 7) team in the state of Nebraska. I like little stuff like that, because, man, we throw it to him vertical all the time and he’s got a gazillion touchdowns. He’s faster than 95 percent of the people he plays against, and then you combine the fact that he’s 6-foot-3 and 200 pounds.”

What fans don’t understand about the recruiting process: “I don’t think they understand the pressure that is on these kids. And the Twitter thing, they get direct messages all of the time and they got people tweeting at them. And they got the visits. Zavier kind of shut his (recruiting) down after he decided to commit to Nebraska, he hasn’t gone anywhere but Nebraska. But for instance Keagan Johnson, my junior that will end up playing Division I football, he’s got five different schools that he’s got to go on unofficial visits. So last week we play our football game and get done at about 9:30, he showers and they literally leave from our parking lot to go to Northwestern. He’s spending 17 hours in a car over Saturday and Sunday. I’m a big Husker fan, and they do have disadvantages because the schools are so far apart and where the kids are that we’re getting them from. My family lives 11 miles from Clemson and the kids down there in three hours can go to 20 different schools. We don’t have that here. The only ones that are close are Nebraska, Iowa State, Kansas State and Iowa, if you really want to stretch it. And the rest of them are FCS, but that’s why the FCS schools around here are so good because they’re getting these kids that are under-recruited.”

2018 was the year of the quarterback. But this coming high school football season in Nebraska, the focus is on the guys on the other end of th…

The 305-pounder from South Dakota started every game since ninth grade, playing this year as a defensive tackle and left tackle.

Omaha North coach Larry Martin knows what a power running game is capable of doing. He saw his Vikings bulldoze their way to the 2017 Class A …

Nate Glantz is only five games into running Bellevue West’s complex offense, and the senior quarterback seems to be making progress every week.

Like the saying goes, it’s not about how you start, but how you finish.

Sevion Morrison is his high school's record holder for career rushing yards with 4,543. The previous record of 4,008 was held by former Oklahoma and NFL running back Spencer Tillman.

Bellevue West's Zavier Betts scores a touchdown against Lincoln High on Aug. 30 at Beechner Field. Betts is one of 14 players who have verbally committed to Nebraska in the 2020 class.