Parker Gabriel and Steven M. Sipple break down Boilermakers-Huskers, and field your questions

First, the Memorial Stadium crowd’s patience thinned, then its ranks thinned as a picturesque Saturday afternoon faded into dusk and Nebraska drifted toward its third straight loss in a wayward season.

Even then, at the tail end of a lifeless second half, four interceptions and 80-plus Purdue snaps into the game, Nebraska tried to throw one more punch. The home team engineered a late scoring drive against the prevent-minded Boilermakers, then had an onside kick squirt loose and up for grabs. At least one Husker had a chance at it. Instead, Purdue made the play.

A fitting end to a demoralizing 28-23 loss for Scott Frost’s team, its third straight and fifth in the past six games. The Huskers are 3-6 overall and in last place in the Big Ten West with November games against Ohio State, Wisconsin and Iowa remaining.

“We played a really poor second half,” Frost said after falling to 15-26 overall in his tenure here.

The Huskers had a chance at the onside kick, but it only provided the coda rather than telling the entire story. The game was lost because Nebraska’s first seven possessions of the second half resulted in three Adrian Martinez interceptions and four punts. The game was lost because NU ran the ball 10 times for 15 yards in the second half and because all of that combined to allow Purdue to possess the ball for 38 minutes and 38 seconds and run 28 more plays than the Huskers did.

Afterward, Frost said “magic speeches” weren’t going to save his reeling football team this year and turned the postgame locker room over to his captains to deliver the message they saw fit.

Junior tight end Austin Allen used the floor to take personal responsibility, telling his teammates he let them down when he allowed a potential fourth-quarter grab pop out of his hands and turn into Martinez’s fourth interception of the afternoon.

“Frustration for me is at an all-time high because I didn’t control what I could control,” Allen said. “… I told the guys that I failed them and nobody’s going to work harder this week. There was a lot of attention to detail that was lacking on my end today.

“Not only did I let my teammates down, but I let the whole state down.”

Frost took a more global approach and wondered about his team’s edge.

“I think edge is the problem. I think it’s the gritty competitor that’s going to go get it done when it matters,” Frost said. “We had a chance to go recover the onside kick and, I have to see the replay, but I thought we had it. There’s the play. And there’s 20 of them in every game. There’s the play and we fail to make the play more often than we need to in order to win games.”

Senior outside linebacker JoJo Domann bristled at the suggestion that the edge had dulled or the want-to of this group had changed as a once-promising season slowly slid into a fifth straight campaign riddled with disappointment.

“It’s not a matter of want-to for us. You can’t challenge our want-to. The ‘man in the arena’ quote. That’s just unfair. Plain and simple,” Domann said. “Obviously there’s something that’s not creating the result that we want and I’ve got three games — hopefully, four games, left in this thing and I’m going to do my part in bringing everything that I have to the table and to building this culture and to representing this ‘N’ and to represent the last name on my back and that’s what I’m worried about.”

Now, the Huskers will have to win their final three — likely all as underdogs — to qualify for a bowl game, though that seems a distant storyline at this point. Ohio State will again come to Memorial Stadium as a multiple-score favorite next weekend.

For that reason, this day, a resplendent autumn Saturday, sun-splashed and downright warm, felt like the moment at which any late-season surge that the Huskers might have drummed up had to start.

Instead, coming off of a bye week that afforded extra time to prepare for the Boilermakers — who, by the way, came off back-to-back rugged outings against Iowa and Wisconsin — Nebraska finished minus-4 in the turnover battle, allowed Purdue to run 86 plays and had no answers in the second half until the one late scoring drive.

Purdue’s offense didn’t exactly feel dominant — its longest play from scrimmage was 21 yards — but Jeff Brohm’s team did enough to stay on the field, aided by the four Nebraska giveaways. And they chipped away. The Boilermakers came in averaging 48 rushing yards per game in league play but churned out 116 on 41 carries Saturday. One week after taking six sacks and throwing three interceptions against Wisconsin, quarterback Aidan O’Connell completed 34-of-45 for 233 and a pair of touchdowns on a turnover-free afternoon. Nebraska recorded two sacks on 47 drop-backs.

Purdue didn’t lead the game until late in the third quarter, but it essentially bided its time, waited out the Huskers — who blew multiple opportunities to control the game — and then finally capitalized on second-half turnovers.

“I give Purdue a lot of credit. They stuck to their plan and won a game on the road in the Big Ten,” Frost said. “You can’t go minus-4 in turnovers and beat very many people in the Big Ten, and we played a poor second half.”

Nebraska’s best chance at taking the bull by the horns came when Chase Contreraz’s first career field goal at NU put the home team ahead 17-14 with 1:20 to go in the first half. The Huskers forced a three-and-out, got good field position with :20 left and put the ball in the air on first down, looking to extend the lead. Martinez, though, saw the ball hit the outstretched fingertips of Samori Toure and fall harmlessly to the turf. The senior receiver would have scored easily and Nebraska would have led by 10 and had the ball again to start the third quarter.

“The play was there and if we hit that, it’s probably a different game even with the pick six and giving them seven points in the first half,” Frost said.

Instead, NU went three-and-out with a three-point lead to start the second half but got the ball back again with good field position thanks to a 62-yard William Przystup punt and a strong opening series from the Blackshirts. Instead of capitalizing on a drive that started from the PU 41, the Huskers’ veteran quarterback made a big mistake.

Martinez, pressured on second-and-14 by Purdue star defensive end George Karlaftis, tried to backhand flip the ball to a receiver and saw Jalen Graham come away with his second interception of the day.

The Boilermakers didn’t get points, but the gaffe switched the field position and the game’s momentum, and after Nebraska went three-and-out again on its third trip of the quarter, Purdue finally cashed in a 48-yard scoring drive and took its first lead of the game, 21-17, at the 2:47 mark of the third quarter.

From there, Purdue had control of the game. Just like Minnesota did two weeks ago when it pulled ahead. The Huskers lost another game by one score, just like their other five losses this year.

“We’ve got a good enough team to win these games and we’re not winning them,” Frost said.

The Scene: 'A lot of adrenaline' for Air Force team that parachuted into Memorial Stadium

Micah Pugh briefly played college football at Air Force. Then he found a more exciting way to get on the field.

Stat tracking: Third-and-longs make for a long day for NU; Bell gets his catches

Nebraska's offense looked out of sync most of the day. One of our stats uncovers a contributing factor, especially in the second half.

Your Report Card: Purdue vs. Nebraska

Your turn to grade the Huskers' performance against Purdue on Saturday.

Purdue's adjustments, including how it defended Martinez, pave the way for road victory

"We definitely adjusted some things and focused more on the running back and less on the quarterback running the ball," Jeff Brohm said.

Nebraska's offense, defense hurt each other as Purdue wins the game — and time-of- possession battle

The Huskers committed four turnovers, which put the Blackshirts in a pickle. Then, Purdue was able to move the chains, time and time again.

The redshirt freshman from Missouri Valley, Iowa, was a second-team junior college All-American in 2019 and then walked on with the program he grew up rooting for.

A look at some talking points after the Huskers' game against Purdue on Saturday.

Martinez threw four interceptions Saturday — three in the second half — as Nebraska's offense bogged down its defense by leaving it on the field far too long.

Steven M. Sipple: The sad story of the end of Frost's tenure at NU may now be writing itself

It seems increasingly possible that when this regular season ends, Nebraska A.D. Trev Alberts will be left with a decision that isn't all that difficult.

Now, the only kickoff time to be determined on Nebraska's schedule is a Nov. 20 road trip to Wisconsin

With 'no new answers,' where do reeling Huskers go from here?

With a losing skid now at three games, Nebraska has arrived at the same conundrum that many struggling teams face this time of year.

NU coach Scott Frost said "a great team doesn't need a coach to motivate it all the time." Trouble is, the Huskers are far from great.

Frost talks job status, says 'We've got to get the wins. The wins take care of everything'

A third straight loss has stirred up questions of the future of the Huskers and Frost at Nebraska. The coach addressed "hot seat" talk Monday.

Logan Smothers would not be eligible for a redshirt if he plays again this year. But, if he's needed, "he’s got to be ready to go."

Ohio State's top three receivers this year have combined for 1,897 yards and 18 touchdowns through the Buckeyes' first eight games. 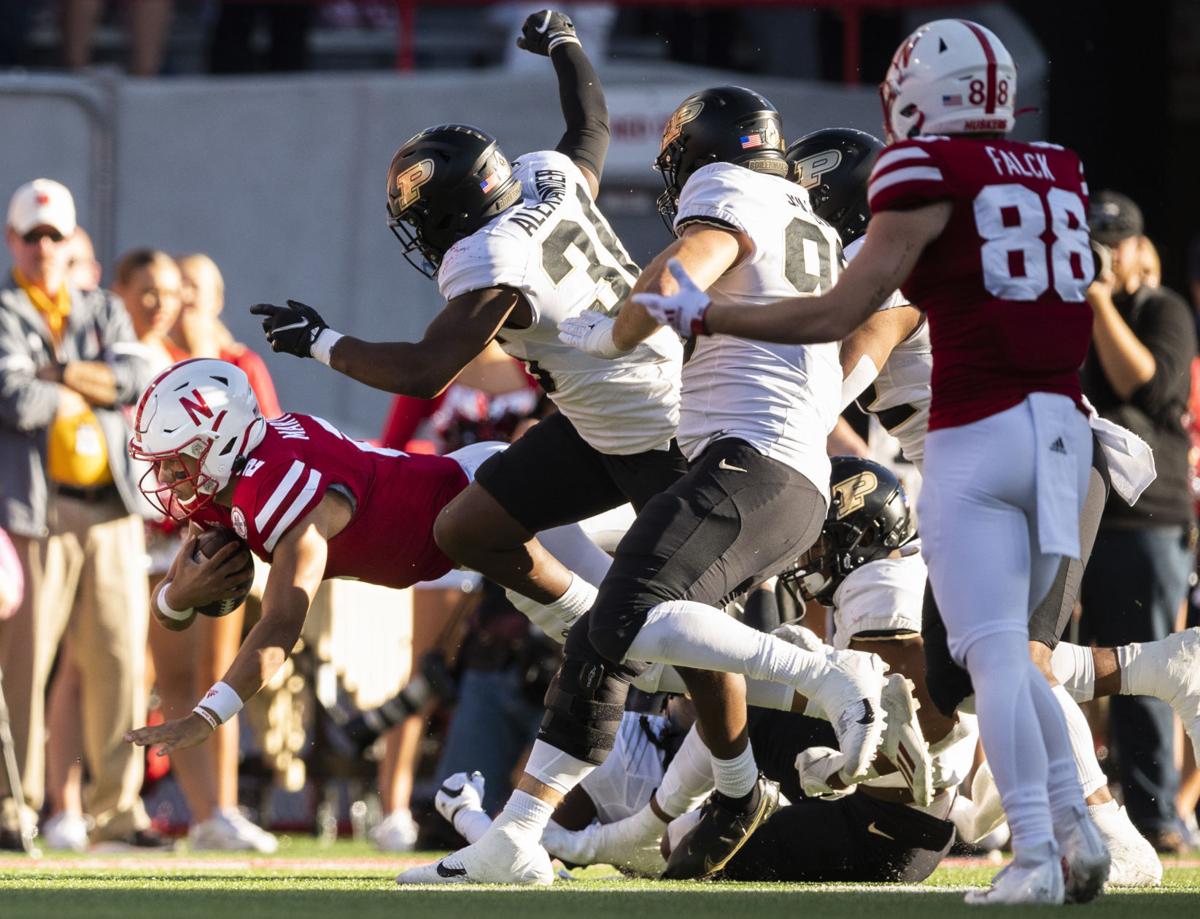 Nebraska's Adrian Martinez (2) gets tackled by several Purdue players in the third quarter on Saturday, Oct. 30, at Memorial Stadium. 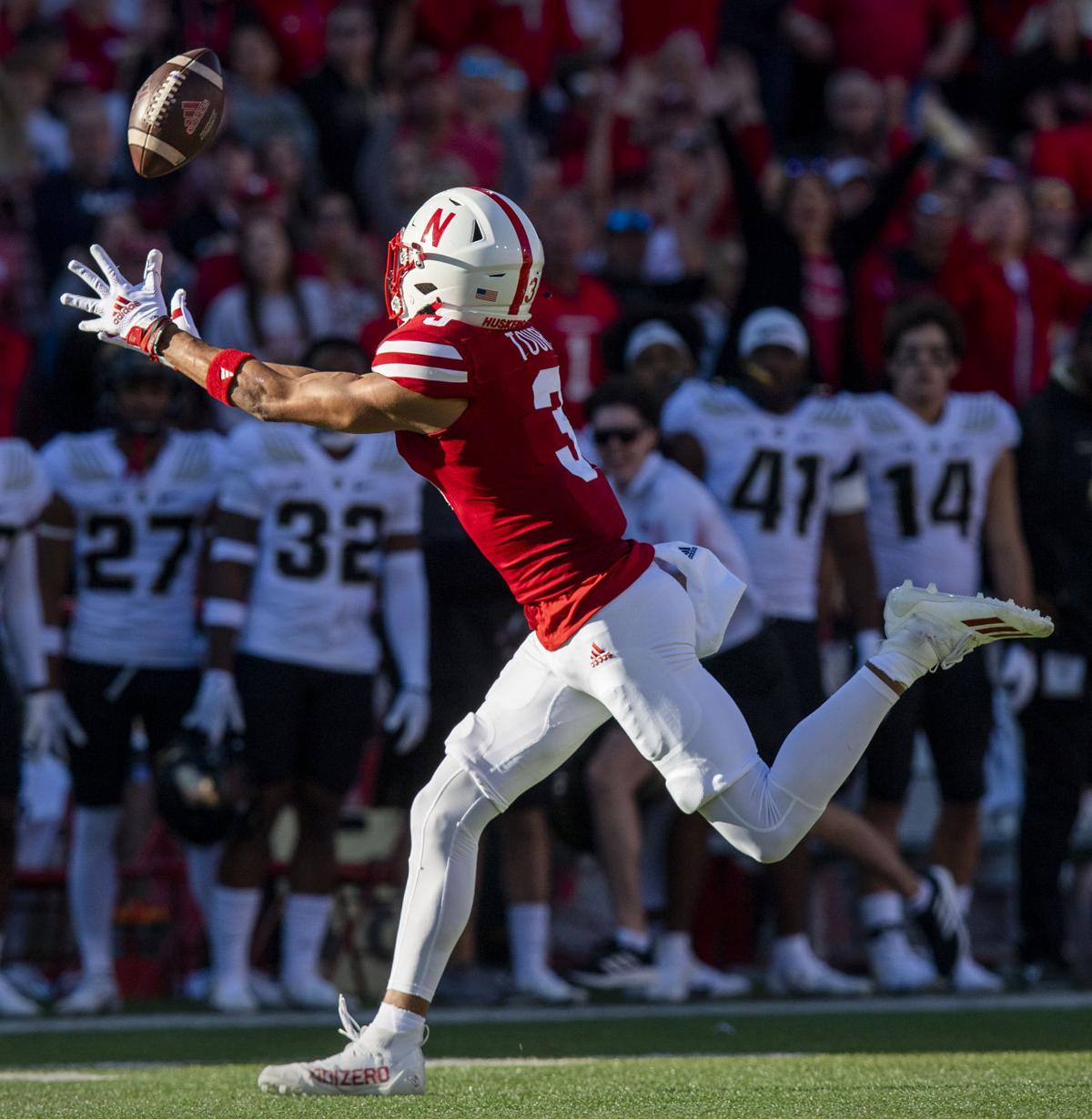 Nebraska wide receiver Samori Toure (3) fails to get a hand on a pass from Adrian Martinez in the second quarter against Purdue on Saturday at Memorial Stadium.