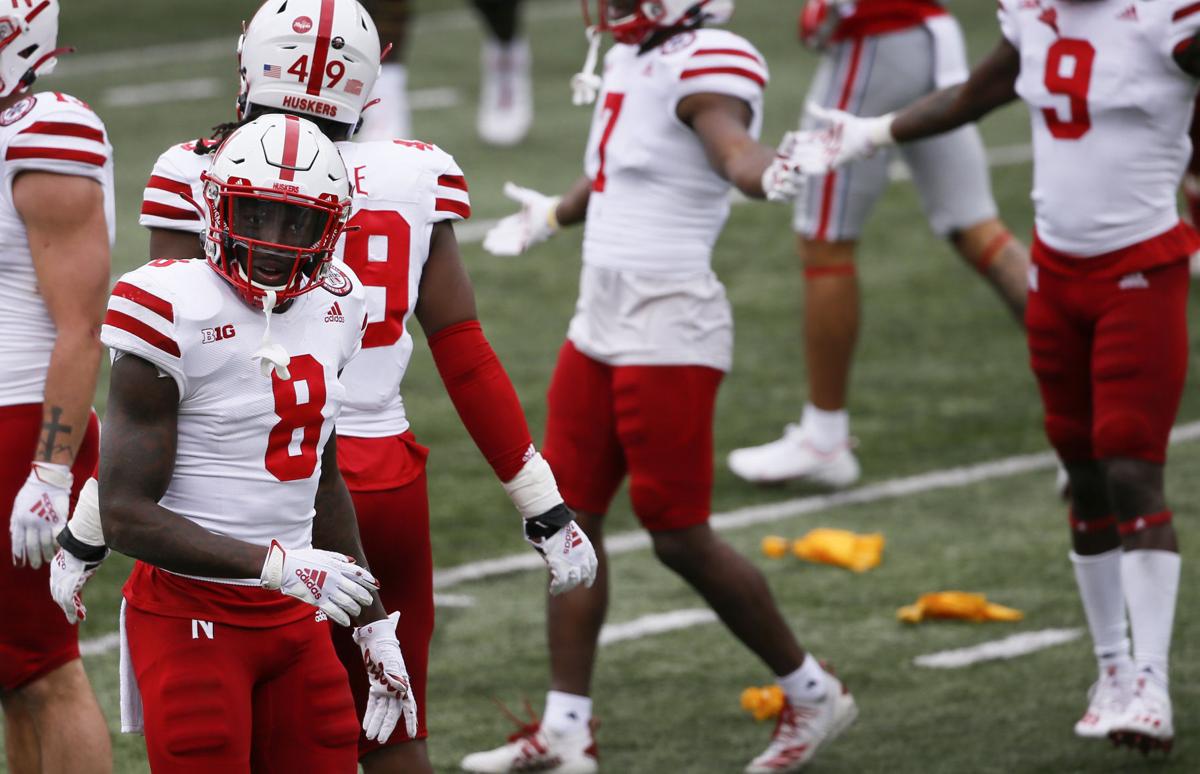 Nebraska safety Deontai Williams (8) reacts after being called for targeting during the fourth quarter against Ohio State on Oct. 24 in Columbus, Ohio. 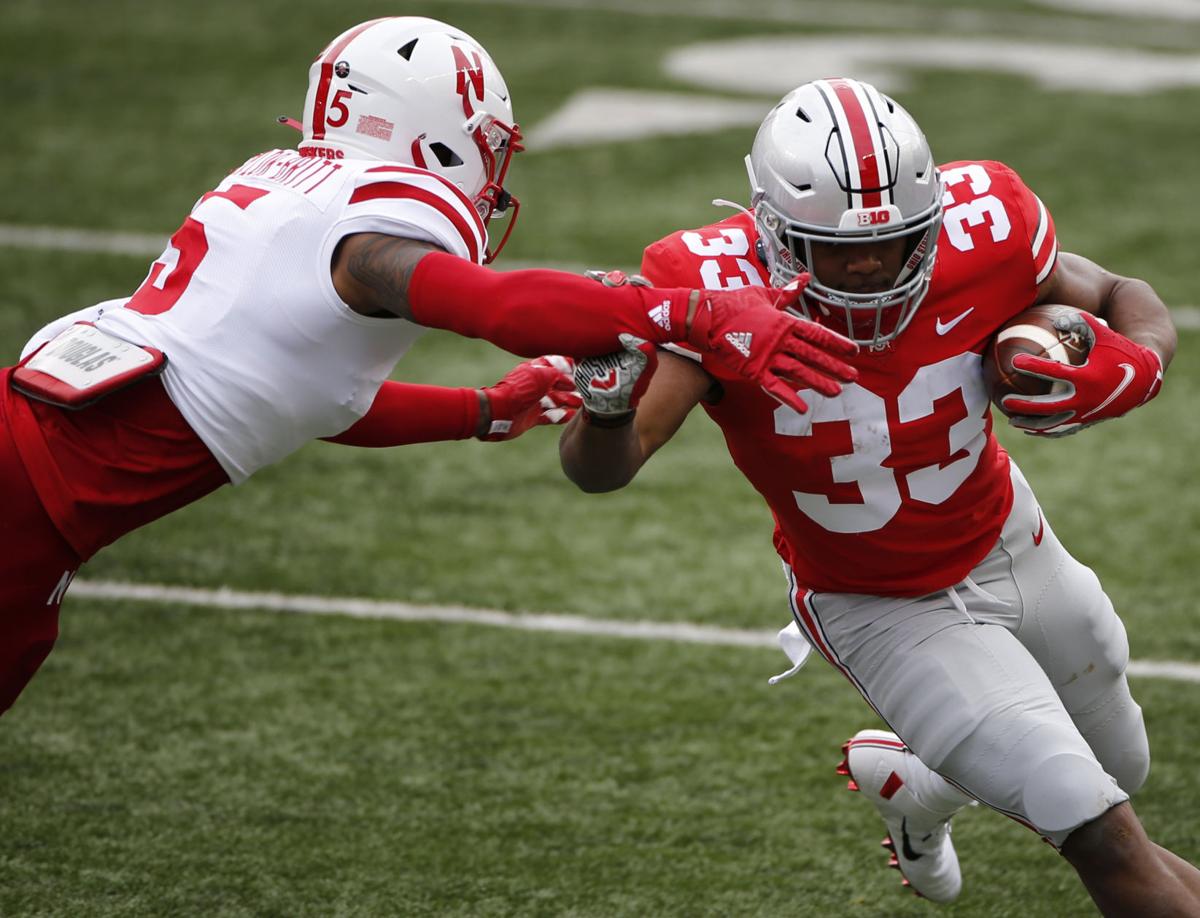 Nebraska defensive back Cam Taylor-Britt  forces Ohio State running back Master Teague (33) out of bounds during the first half Saturday in Columbus, Ohio.

That Justin Fields had his way with Nebraska's secondary was concerning enough.

That the NU defensive backfield lost two starters because of targeting penalties in the second half only added to the misery.

Because cornerback Cam Taylor-Britt and safety Deontai Williams were both ejected in the second half of Saturday's loss to Ohio State, both could potentially miss the first half of next week's game against Wisconsin and quarterback Graham Mertz, who only went 20-for-21 for 248 yards and five touchdowns for the Badgers on Friday night.

"I’m not going to say anything now other than on the field it looked to me like Deontai hit him in the chest with this shoulder. But that’s just me seeing it live in the stadium big screen," Nebraska coach Scott Frost said of the two plays and whether there could be potential to get either player back for the full game against Wisconsin. "Hopefully we can have some discussions about that. We’ll see where that goes.

"We’ve got to play smart as a team. The other one certainly wasn’t violent, but it was a dumb play and we need to fix those things."

Taylor-Britt was ejected first early in the second half after a hit on Ohio State running back Steele Chambers. Taylor-Britt appeared to lower his head on a glancing blow to Chambers at the end of a long run in Ohio State territory.

A junior, Taylor-Britt immediately put his hands in the air before leaving the field. Television cameras showed an emotional Taylor-Britt on the sideline after he had been ejected.

Create your own user feedback survey

It was probably easier to do so in a win, but Ohio State coach Ryan Day was sympathetic to NU losing both players.

"I know Scott and I know the guys on the defensive staff and I know that they would never teach that. There's some tough spots in there," Day said. "We certainly know and understand it from last year, we had our own share, but when it's going fast, you're trying to make decisions on how to get a guy down, it's hard.

"I'd be shocked if there was any (malicious intent) there. But at the same time you understand you've got the protect the players and that's part of this right now, which isn't easy at times."

Correct or not, the portion of Nebraska's defense many considered a strength prior to the season is now down two starters.

A third key player, linebacker JoJo Domann, was also called for targeting before that call was reversed.

"We got to be physical when it’s time to be physical, in the box particularly. And then we’ve got to be smart when it’s hits outside the box like that on defenseless receivers — keeping our head up, using our shoulders, just being smart about that," Domann said. "It’s tough when bullets are flying, but we’re football players and we can do that."

Now, Nebraska has to find a way to maintain physicality while toeing the line against going too far. And the Huskers will have to do it against a Wisconsin team always among the most physical in the Big Ten.

"Things that we need to work on is not beating ourselves with penalties," linebacker Collin Miller said. "Penalties is what can kill the game, so we've got to focus on penalties. Wisconsin is a physical team, too, so just got to keep that physicality up."

Notes: A 'normal' Saturday in empty stadium; rotation on the OL; progress against the run

Not many people saw it in person, but it's still a win for Ohio State in a game that players said seemed normal on the field.

McCaffrey provides spark, both QBs have strong moments as NU gets both on field

Saturday was the first taste of the two-headed monster Nebraska appears to have at quarterback, and it sure tasted good to Husker fans.

Many Nebraska fans will never get used to highlighting positives in a 35-point loss. It's hard to blame them.

The Nebraska-Ohio State football game was the highest-rated college contest on television Saturday.

Husker Extra Rewind: An offensive foundation to build from and questions to answer

A drive early in the second quarter provided a glimpse at the foundation Nebraska is building.

The Big Ten announced Monday morning the Week 3 schedule and the Huskers and Wildcats will kick off at 11 a.m. at Ryan Field in Evanston, Illinois.

Nebraska safety Deontai Williams (8) reacts after being called for targeting during the fourth quarter against Ohio State on Oct. 24 in Columbus, Ohio.

Nebraska defensive back Cam Taylor-Britt  forces Ohio State running back Master Teague (33) out of bounds during the first half Saturday in Columbus, Ohio.