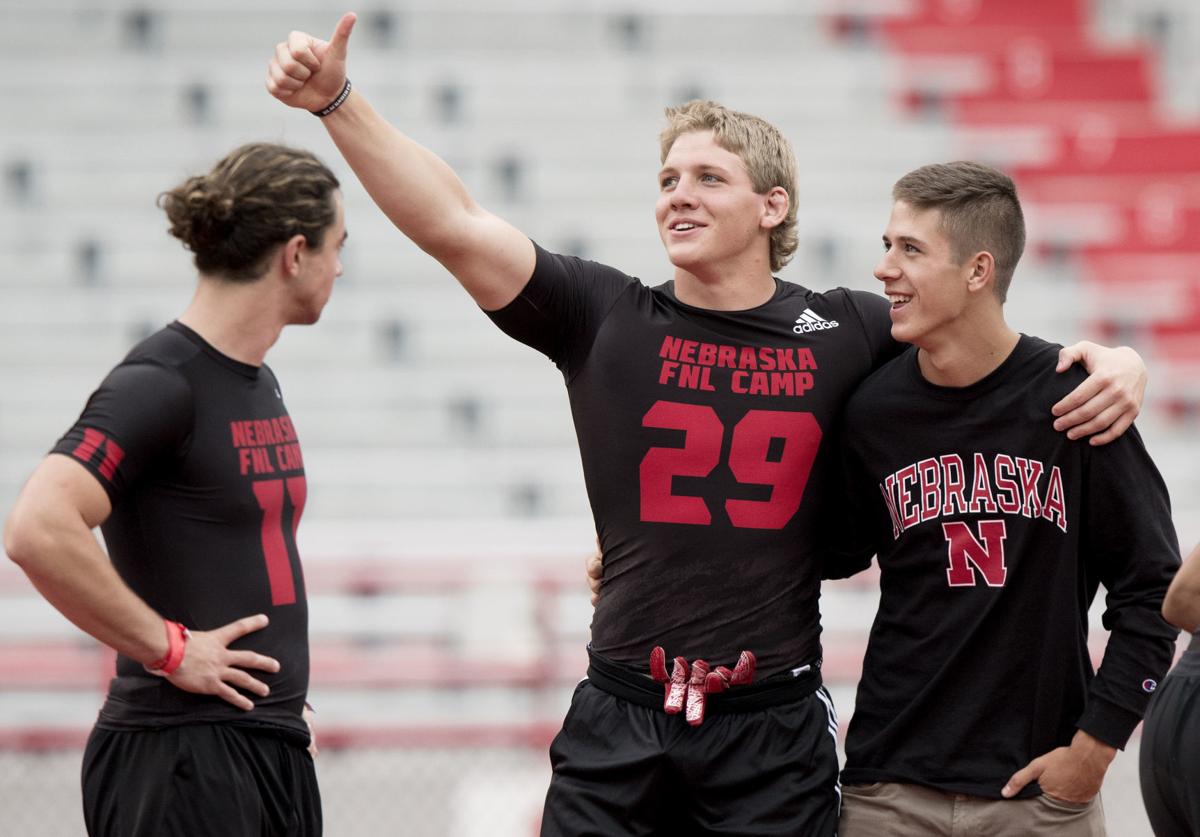 Seven days and 30 degrees cooler, Nebraska put on its second Friday Night Lights event in front of more than 2,300 people at Memorial Stadium.

Round 2 looked somewhat similar to last week's event in that it featured a large group of campers — more than 250 — and the bulk of them came from within the state's borders.

In all at the two FNL camps this month, Husker coaches got their eyes on more than 550  campers, many of whom attended both events.

This camp was as much about a couple of players who were here but didn't participate as it was about the high school players running through drills led by NU assistant coaches and watched carefully by many current Huskers.

McCaffrey caught up with quarterbacks coach Mario Verduzco before the camp, then spent much of the evening walking around with incoming freshman Tate Wildeman, a fellow Colorado player and former conference opponent. The pair mingled with current players and took in the sights.

Meanwhile, Alexander spent much of the camp with one of the newest Husker commitments — junior college defensive back Will Jackson. Jackson, now in Lincoln and enrolled in summer classes, and Alexander are both impressive-looking athletes. Alexander does not yet have a Husker offer and had a visit to Texas State planned for Saturday.

Alexander maintains he doesn't care if he ends up at a big school or a small school, but given his offer list, it appears NU would become a serious player in his recruitment if it extends a scholarship offer.

Nebraska visit was a whole blessing 🤩 and some! Great campus and even better coaching staff. #GBR🌽 #JUCOproduct pic.twitter.com/JUcEYueEpE

Here are some other observations from the evening:

McCormack also ran well, clocking a sub-:04.6 40 and checking in at 6-1 and 214. He's had a good camp season, last month earning the linebacker MVP honor at a large Rivals camp in Chicago.

Neither has a scholarship offer, but both could gain at least consideration for walk-on spots as the cycle progresses.

An intriguing quarterback: The quarterback play Friday was better than last week, and the most interesting prospect of the group was 2020 signal-caller Roman Purcell (Indianapolis). The Warren Central player was the fastest quarterback of the group by a considerable margin. He showed flashes of a good arm, but also inconsistent accuracy.

Purcell, listed at 6-1 and 190, has offers from Kentucky, Louisville and a host of smaller schools.

Defensive lineman Ethan Piper is 6-4 and 285 and had several good repetitions 1-on-1.

Athletes Garrett Nelson (Scottsbluff) and Garrett Snodgrass (York) are both versatile and will have position options when they get on campus.

The junior-to-be from Jefferson already has a Husker offer, which came at the beginning of May, and has since added offers from Iowa State, Cincinnati, UCF and others.

Henderson committed to Minnesota for the 2018 class, but but now is a 2019 recruit. He's a three-star prospect.

Mitchell (6-0 and 220) is originally from Middletown, New Jersey, but wound up at Fort Scott (Kansas) Community College. Mitchell, older than most of the kids at the camp, showed a physical edge.

2020 tackle Corcoran on campus again: Sought-after tackle Turner Corcoran made the drive with his basketball coach from Lawrence, Kansas, for the second time in recent months.

Corcoran, a consensus four-star prospect, is ranked in the top 100 in the nation by both Rivals and 247Sports. He did not participate in the camp itself, instead spending time with McCaffrey and others.

Great day visiting Lincoln with @turnercorcoran !! Thanks again to @CoachRHeld and @GregAustin2717 for having us up! See you again in September! #GBR
🌽⚪️🔴 pic.twitter.com/6NNrY3UWTz

Some visitors from SEC country: No, not exactly what you're thinking. Among the fans in attendance, the two men in Mississippi State gear definitely stood out. The Bulldog fans and Mississippi natives made the trip to Omaha for the College World Series and, as college football fans, drove to Lincoln just to see Memorial Stadium. As they walked on Stadium Drive, they were alerted by a Husker fan that a free camp was going on and they could just walk in.

Memorial Stadium certainly left an impression on the pair, who raved about the size of the place and the length of NU's sellout streak.

Reimer took part in last week's FNL camp, ran well and will be an interesting player to watch this fall.

The prospects and fans were out for Friday Night Lights, Part II at Memorial Stadium on Friday, June 22, 2018. Lincoln Journal Star photos by …

Matthew Anderson, a 6-foot-7 tackle from Leesville, La., plays football for his mom. On Friday, he made public his commitment to play football at Nebraska as part of the Huskers' 2019 class.

A weekly look at the latest in Nebraska football recruiting.

As more than 300 campers worked out on a steamy Memorial Stadium turf during the first of Nebraska’s two Friday Night Lights camps, Scott Fros…

South Dakota State was the first NCAA Division I school to offer a football scholarship to Luke Reimer.

Former Marine Kapitulik helps Nebraska football get with The Program

Scott Frost and Eric Kapituilk have been friends for eight years. The Nebraska football coach and ex-Marine special forces commander hiked the Grand Canyon together in May and and Kapitulik's group, The Program, came to Lincoln recently.

Make sure the windshield wipers work on a rainy Monday, because we're taking a drive.

The first time Luke McCaffrey visited Nebraska’s campus, he had just received a scholarship offer four days earlier and rushed to get a trip t…

Nebraska is three days into preseason preparations for the 2018 campaign, but on Sunday night added another piece for 2019.

Wandale Robinson and the end zone were meant to be paired together. 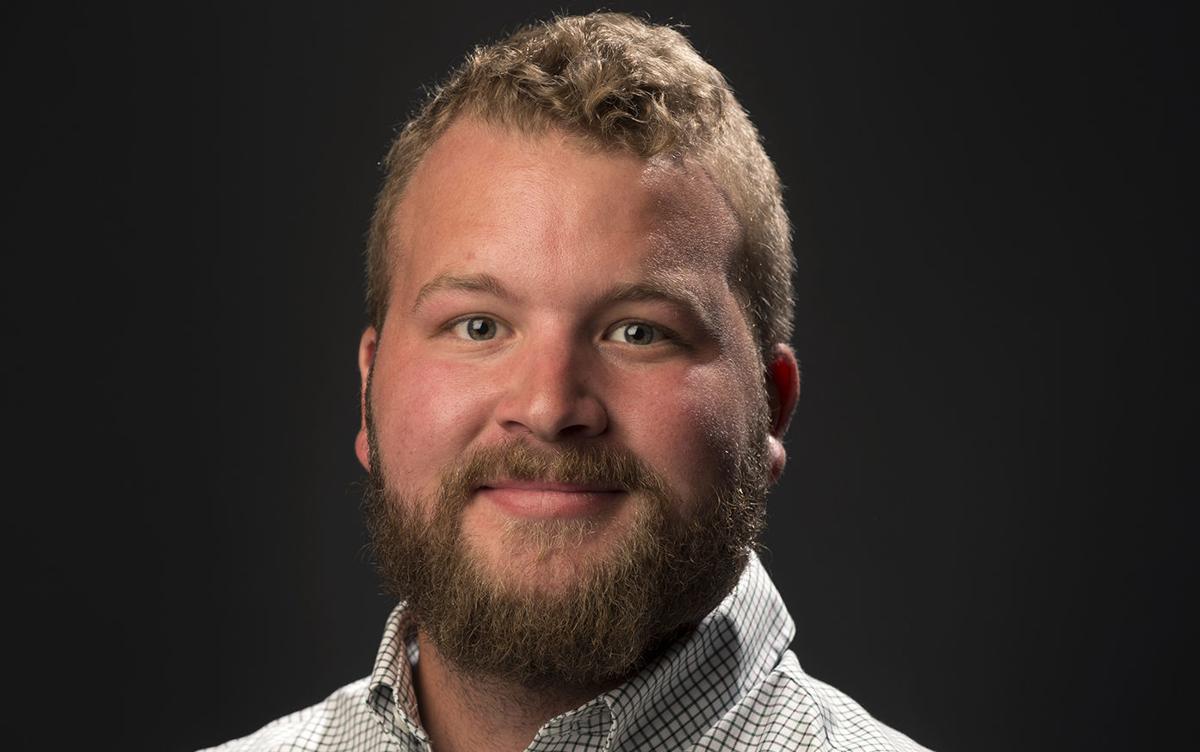