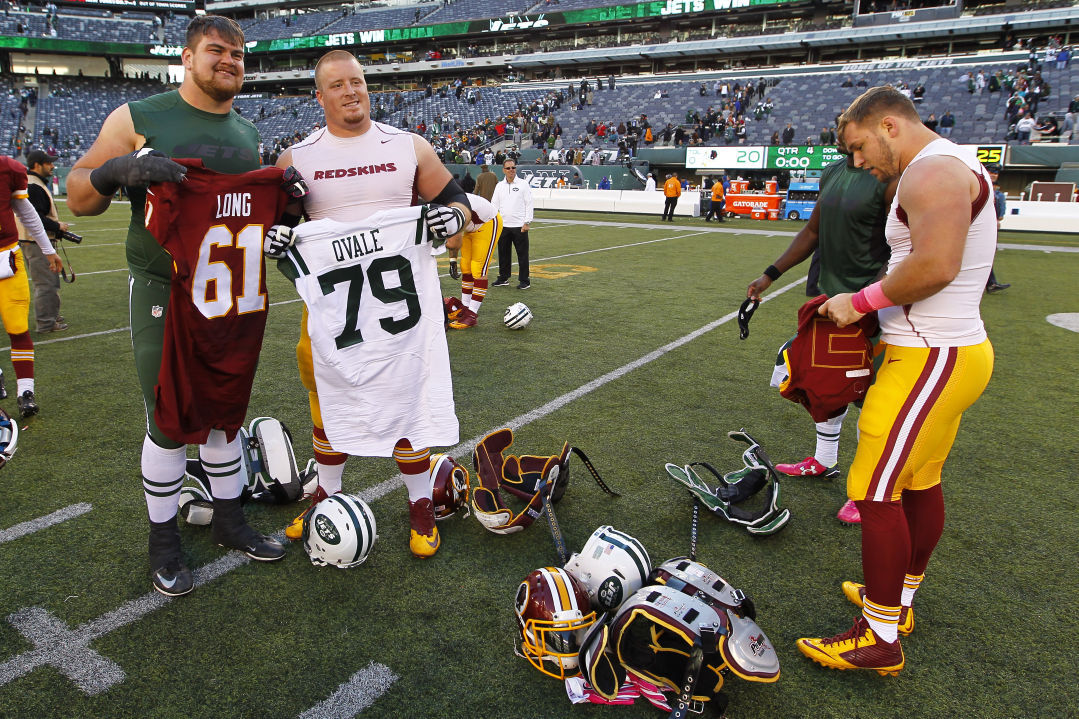 New York Jets tackle Brent Qvale (left) and Washington guard Spencer Long exchange jerseys as Will Compton (right) joins them after a game last year. All three are former Huskers in the NFL. 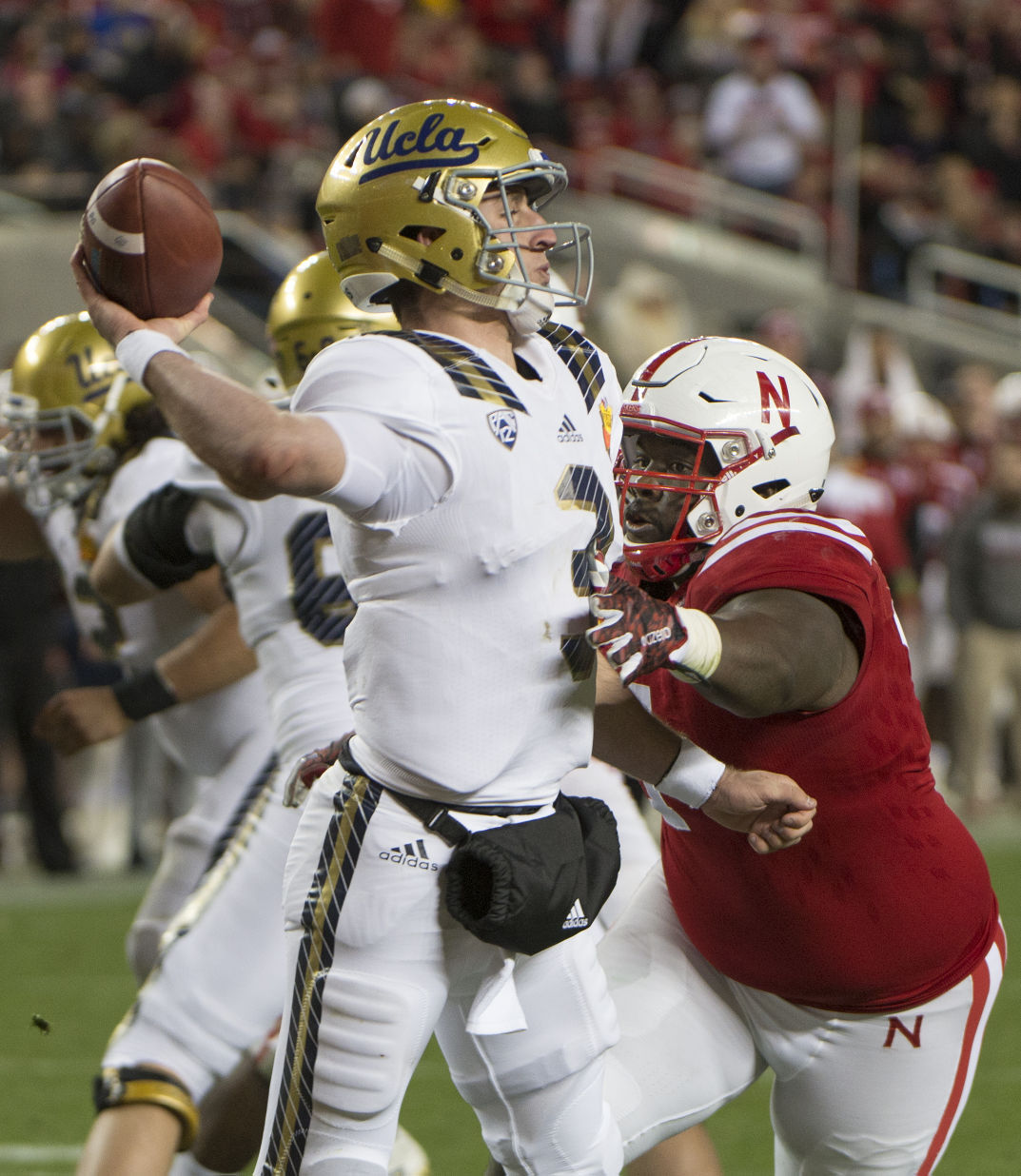 Brent Qvale wore a tuxedo on his big draft day, standing a few feet from the groom. His fiancee sat in the audience, no doubt occasionally peeking at his phone. She wasn't being disrespectful. Everyone understood.

Several people there, including the groom, Cole Pensick, and another one of the best men, Jeremiah Sirles, were waiting for their phones to show an unfamiliar area code, too.

“During the ceremony, I'm standing there and obviously paying attention," said Qvale, a Husker senior offensive lineman in 2013. "But in the back of your head, you're wondering, 'What's happening, Is anything going on? Did I miss a call?' Just waiting."

Everyone is just waiting. Dr. Seuss was no doubt referencing the NFL Draft when he wrote that, no?

Jay Moore remembers his waiting game. Back in 2007, the first three rounds were on a Saturday and the final four on Sunday.

The former Husker defensive end's agent had calculated that Moore had about a 20 percent chance of being drafted in the second round, 50-60 percent of going in the third, otherwise the fourth.

Moore spent the early part of that Saturday playing golf with family and friends. He hit it well on the front nine. The back nine? "My mind was definitely wandering more towards football."

Moore was starting to monitor which D-linemen were going off the draft board. He saw his teammate, Adam Carriker, had been picked in the first round. He was at his parents' house in Elkhorn to see Husker running back Brandon Jackson picked in the second, and linebacker teammate Stewart Bradley taken in the third.

Moore thought Philadelphia or Arizona or Tampa Bay might make his day before that third round ended. Didn't happen. Saturday ended with him atop of Mel Kiper's draft board ("kind of cool") but not yet drafted.

"I was a little frustrated," Moore said. "I went on a little walk around the neighborhood."

Wait until the morning. The call came early in the fourth round. A Bay Area number. The San Francisco 49ers' general manager and defensive coordinator told him he'd been drafted.

Who says you can't party on a Sunday?

“Literally anyone and everyone we knew came over to my parents' house," Moore remembers.

A joyous gathering hanging out in the garage and driveway. "We took that party, even though it was on a Sunday, pretty early into the morning on Monday."

The waiting isn't easy. Several former Huskers are about to find that out when the NFL Draft takes place this weekend.

Will Maliek Collins or Alex Lewis get picked on Friday when the second and third rounds occur? When might Vincent Valentine get drafted? Will Andy Janovich get picked? What other Huskers might get their chance, even if it's by way of post-draft free agency?

Patience. Moore has some good advice.

"It's just a starting point. That's the best way I can put it," he said. "It’s an opportunity and that’s all you can ask for. Everything you've done up to this point, you’ve put 100 percent of your effort into it, you’ve left no stone unturned and it’s 100 percent out of your control. Whatever happens, happens. It’s in God’s hands. It’s just a starting point. Where you go from there is totally up to you."

Granted, there's money at stake. With each passing round, a player can lose hundreds of thousands of dollars in signing bonus cash. Even with that, Moore reminds, "That first contract is what it is and it's about getting to that second contract and building on that one, so don't stress about it too much."

In Qvale's case, the stress ended during the wedding reception. Sirles and Pensick got their calls too.

Qvale remembers his agent telling him in the seventh round about some teams that were interested. The New York Jets, in particular.

There were some anxious moments. Qvale tried calling his agent over a span of about 15 minutes after the draft and couldn't reach him.

No worries. His agent had been working on his behalf. He called Qvale back. Imagine how good it sounded to the big man when he heard, "It's all good. You're signed. You’re on the Jets.'"

You know what Qvale did with that free-agent chance? He got on the practice squad the first year and did well enough that he signed another three-year deal prior to last season. Then he pushed himself onto the Jets' active roster every week last fall.

So Qvale would tell this year's Husker draft hopefuls to make the most of this week's waiting game experience.

“Definitely surround yourself with people you like being around," he said. "Try to enjoy it. It only happens once."

Moore would second that.

He was on a roller coaster that lasted about 36 hours that spring weekend in 2007. But you know what he tells you now?

"I wish I could go back and relive everything from that day. It was a lot of fun."

Many Husker streaks have fallen in recent years. Here's one that remains: Since the common NFL Draft began in 1967, the Huskers are one of jus…

Collins and Valentine get their good news in the third round

Another Husker D-lineman is going to Big D. Then Big V went off the board earlier than many may have guessed.

Drift back a year and step into Andy Janovich's turf shoes.

New York Jets tackle Brent Qvale (left) and Washington guard Spencer Long exchange jerseys as Will Compton (right) joins them after a game last year. All three are former Huskers in the NFL.