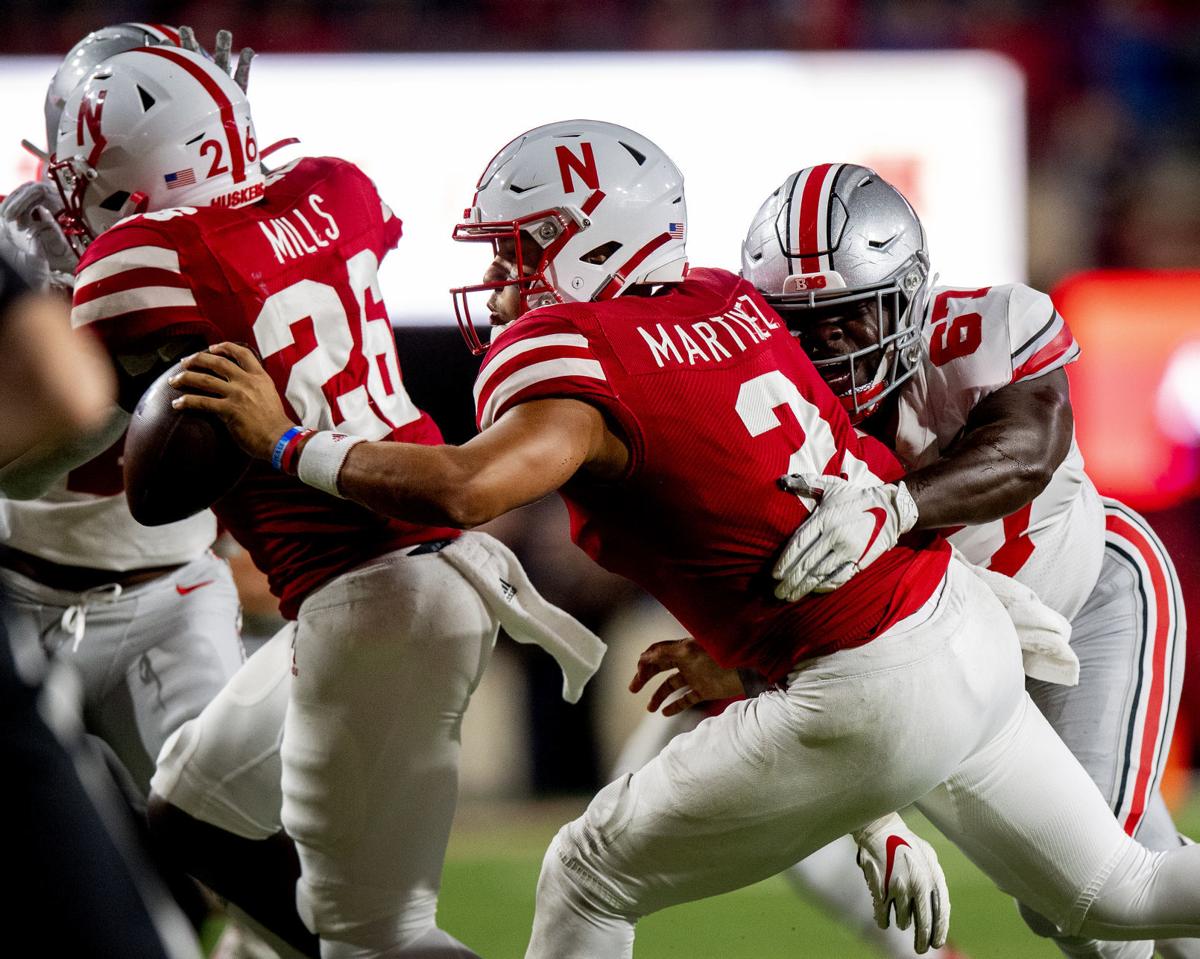 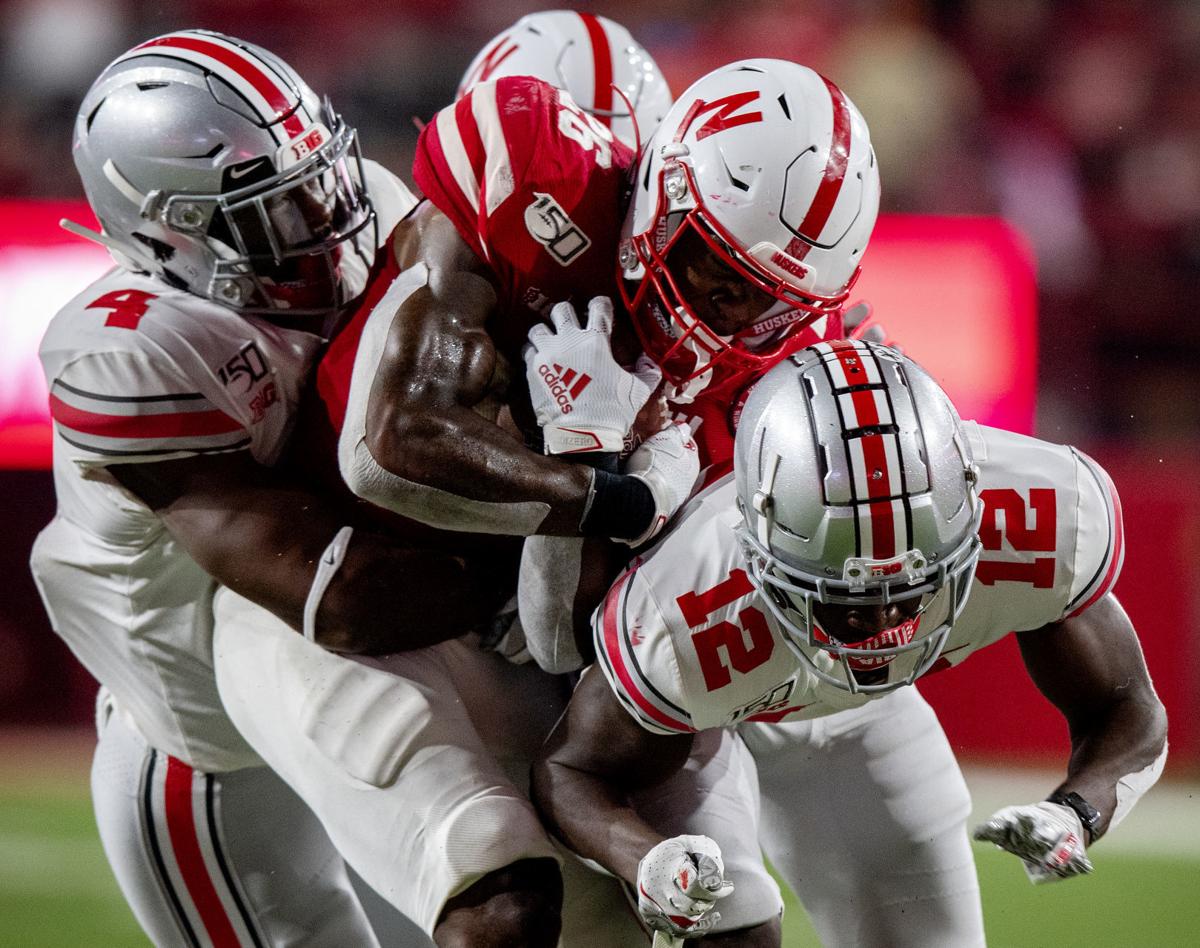 A pair of Buckeyes try to bring down Nebraska running back Dedrick Mills (center) in the third quarter last Saturday at Memorial Stadium.

Call it whatever you want.

Whatever the name, Nebraska fans and opponents can expect to see more of the new package that the Huskers broke out late in the first quarter of a lopsided loss to Ohio State on Saturday night. Operating out of an I-formation and out of Frost’s double wing, the Huskers for one drive looked more like the teams Frost quarterbacked in the mid-1990s than the ones he’s coached the past three seasons.

“We have some personnel that I think can run it,” Frost said Monday. “You can’t run that stuff unless you’ve been working on it, and we’ve been working on it for a long time. Some of the things we’re running fit the defense that (Ohio State) gave us. I thought the guys went out and executed that well. We had a whole drive that we put together with that stuff. …

“I want that to be a piece of what we’re doing. It’s part of what Nebraska has been built on and the fabric of what we are, what we need to get back to a little bit. We have the right personnel to do it. So, we’ll pick our spots but it certainly looked pretty good on the first time out.”

Head football coach Scott Frost talks about moving on from Ohio State and preparing for Northwestern on Sept. 30, 2019.

Key in that personnel group are sophomore quarterback Adrian Martinez and junior running back Dedrick Mills, who filled a similar role in 2016 at Georgia Tech, when he won the ACC’s freshman of the year award as the "B" back or fullback in Paul Johnson’s option offense.

“It's simple because I played at Georgia Tech before. It's something I was used to,” Mills said. “They thought I was the perfect back for it."

Don’t expect the Huskers to fully turn back the clock by two decades and turn into a full-on option attack, but Frost said it will continue to pop up, particularly based on how defenses want to align against the Huskers.

“I think it could be a real weapon for us moving forward, and we’re going to continue to work on it and progress with it,” Martinez said. “We’ll see where it goes in the coming future.”

Martinez and tight end Austin Allen both said that Frost helped demonstrate the finer points in practice. Martinez joked this summer at Big Ten football media days that he didn’t watch much film of Frost because the offenses are so different. Now, though, he confirmed that brushing up.

“It was nice to see him running this offense, so it was a better understanding for us,” Allen added. “He could tell the guys exactly what he wants.”

“I think that’s a huge weapon we can use, because a lot of times teams are practicing for our spread, RPO offense,” Allen said. “And when we throw in something like that, teams have to waste a couple days just talking about this I-formation offense.”

Two-minute drill: Moving on to Northwestern

Steve Sipple and Parker Gabriel give the highlights of the Monday press conference with Scott Frost and Nebraska football players on Sept. 30, 2019.

Watch: Martinez on moving on, 'excited' to host Nortwestern

Quarterback Adrian Martinez talks about moving on from the loss to Ohio State on Sept. 30, 2019.

Steven M. Sipple: Mills at fullback should continue; lay off Martinez; and Walters' plight at WR

A message for those misguided souls who are calling for Nebraska quarterback Adrian Martinez to be benched: Lay off the sophomore. Note Scott Frost's opening statement Saturday as he assessed his team's performance against Ohio State. He started with, "We didn't protect well enough ..." Bingo!

Frost, Cook weigh in on California law that grants college athletes rights to some payment

For the first time, Nebraska fans are going to be able to listen to Husker football in Spanish.

Cheer up, Nebraska football fans. It's a new week and NU will not be seeing Ohio State anytime soon. Up next is the Wildcats. Let's hit the br…

It's important to note that Ohio State is the class of the conference -- by far, it says here -- because Nebraska will now settle into a four-game stretch of its schedule that appears manageable (as opposed to monstrous like OSU). The key for Scott Frost as the program's leader is to avoid allowing his team's confidence and psyche to be profoundly impacted by the Buckeyes' beating.

Turnovers haunted Nebraska at Colorado. They nearly led to a loss in Champaign, Illinois.

Nebraska pulled out all the stops this week in the lead-up to the most anticipated game at Memorial Stadium in some time.

Nebraska head coach Scott Frost's general message Monday was Adrian Martinez needs help from his teammates. "We're putting a lot on Adrian anyway. But when he's worried about where the snap is, worried about who's coming unblocked, worried about if his receiver's going to be in the right place -- that's too much to put on a quarterback."

Husker recruit watch: The next Duck-R Husker shining in Texas

Nebraska likes to recruit athletes who can produce as a wide receiver and ball carrier. Wan'Dale Robinson is a prime example.

Red Report: Moving past OSU; Buckeyes get Frost's vote; remembering those lost; Green gets in

The games don't stop, even if it might feel to some outside the program like the world is ending.

Ohio State's convincing win over Nebraska made the Buckeyes an even stronger choice at the top, while Minnesota moves up in the latest Big Ten power rankings.

Defensive coordinator Erik Chinander reflects on Ohio State and talks about the Northwestern offense after practice on Oct. 1, 2019.

Red Report: Blackshirts have to 'put the fire out'; questions at QB, WR for Northwestern

The Nebraska football team is tied for 128th nationally in turnovers lost with 14. That's the same number as 0-5 New Mexico State and just one fewer than than Hawaii, who leads the nation. But Erik Chinander isn't making any excuses for his defense.

Rapid Reaction: Preparing for Northwestern; forcing mistakes; Ohio State one of the best

Northwestern may rank 126th nationally in total offense, but Nebraska linebackers coach Barrett Ruud notices something that all offenses could…

One year after penalties, turnovers hurt vs. Northwestern, a familiar challenge awaits Huskers

The first play of Northwestern’s game-tying drive a year ago against Nebraska, the drive that covered 99 yards in just 1 minute, 53 seconds to…

A pair of Buckeyes try to bring down Nebraska running back Dedrick Mills (center) in the third quarter last Saturday at Memorial Stadium.