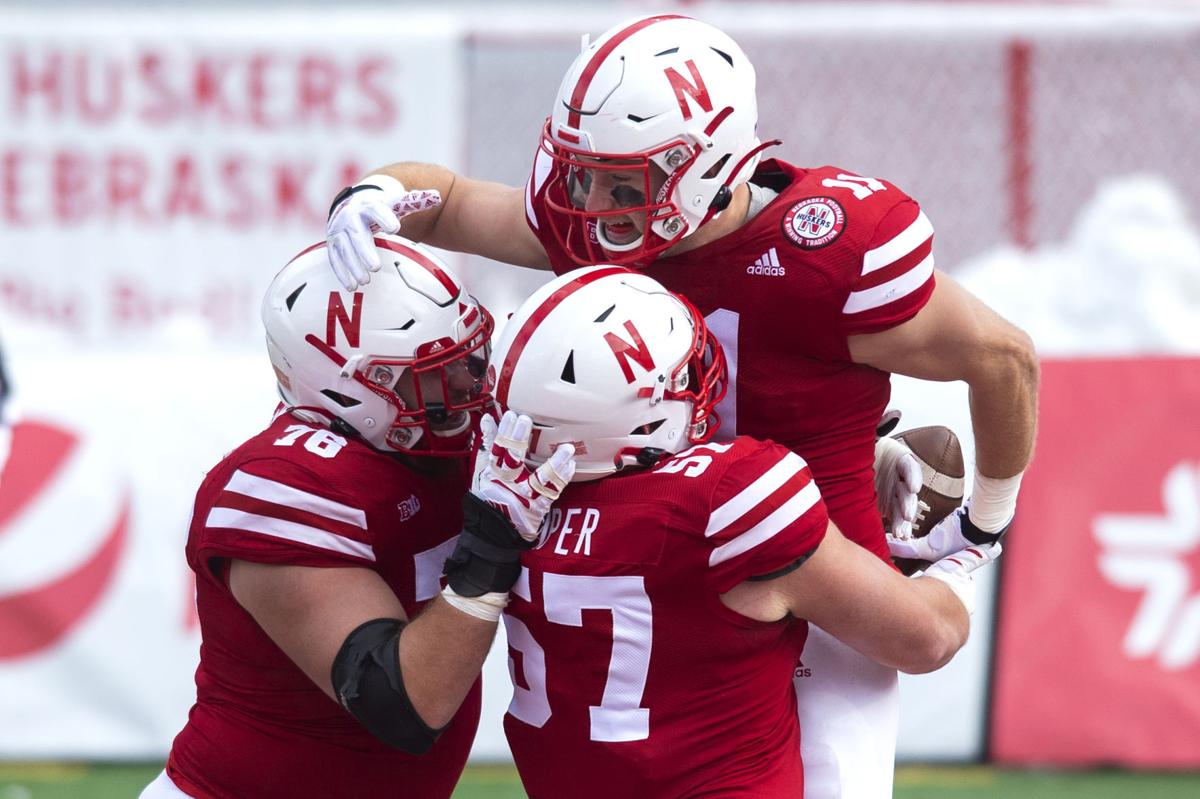 Nebraska's Austin Allen celebrates his touchdown catch with Brenden Jaimes and Ethan Piper against Minnesota on Dec. 12, 2020, at Memorial Stadium. 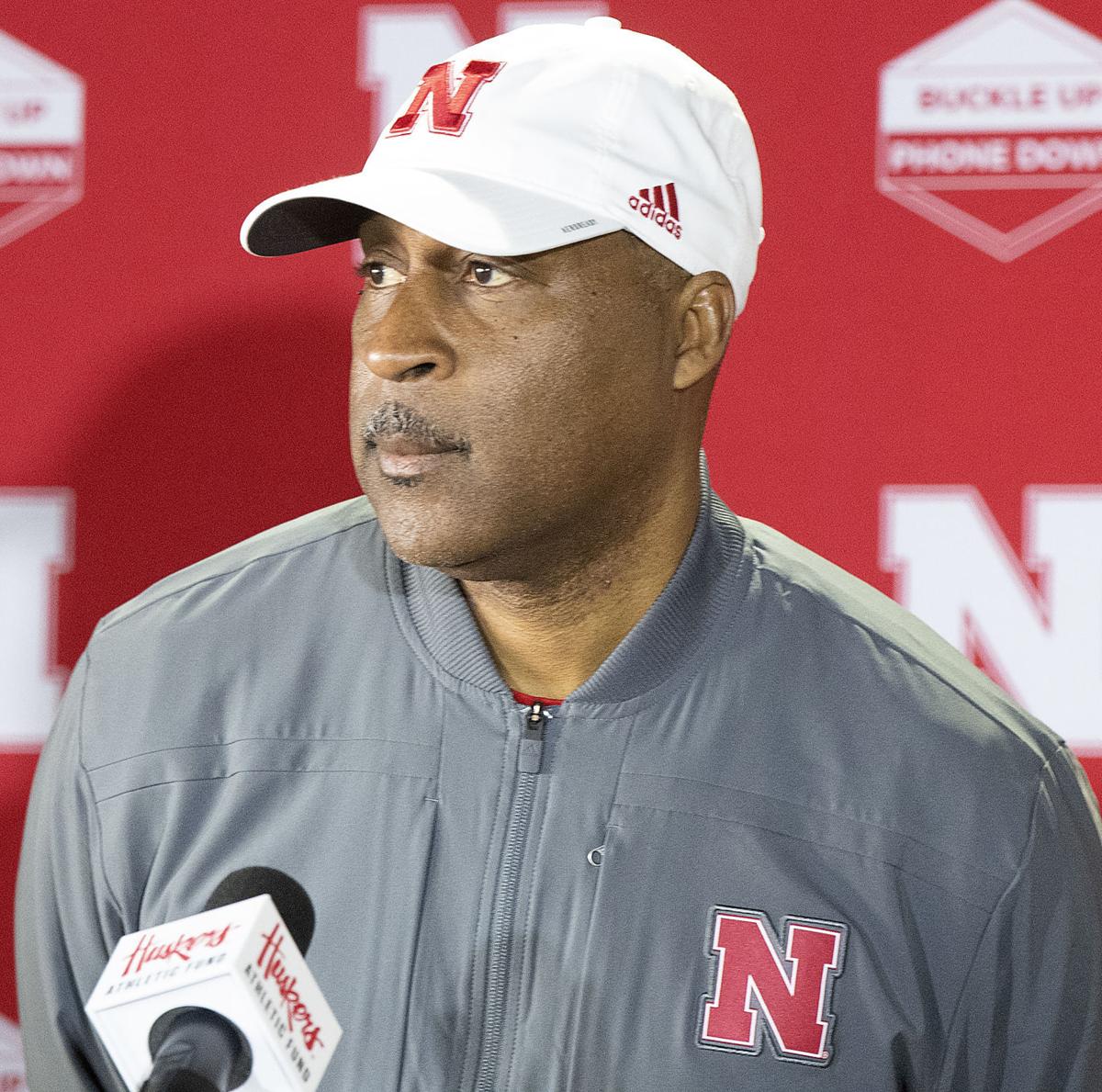 He oversees what's unquestionably one of the strongest position groups on Nebraska's football team.

The group is led by a couple of veteran players, Austin Allen and Travis Vokolek, and includes the most highly touted recruit in the Huskers' class of 2021.

So one might think Husker tight ends coach Sean Beckton's job might seem a little easier to him this year than in some years.

In fact, he said, he expects his guys to focus on becoming one of the top tight ends groups in nation.

"If they're not living up to that standard, I'm going to let them know on a daily basis," Beckton said.

Allen, a 6-foot-8, 250-pound junior from Aurora, embraces a leadership role for the entire offense. He's the team's leading returning receiver, although his 18 receptions for 236 yards were a distant second last season behind 5-9 sophomore slot receiver/running back Wan'Dale Robinson (51 catches for 461 yards), who in January transferred to Kentucky.

If Nebraska's downfield passing game improves — a priority, according to coach Scott Frost — Allen figures to be even more of a prime target. According to Beckton, Allen is an elite pass catcher and route runner.

However, "He really needs to continue to develop at the point of attack in his blocking," the coach said. "He's really made a lot of strides over the last two years. I'm really, really excited to see his strength gains translate to the field when we put the pads on Friday.

"He's really increased his strength level. You can tell just by looking at him and watching him doing things the first two days."

On the other hand, the 6-6, 260-pound Vokolek's blocking is of no concern. He's a road-grader who last season routinely knocked defenders 10 yards down the field, Beckton said.

However, "He's got to get better understanding the entire offense," the coach said. "Austin Allen has really helped him grow in our offensive scheme. Those guys have done a lot of studying together as far schemes and things that have really helped (Vokolek) play fast. He made a couple adjustments (Tuesday) that I hadn't gone over. But him and Austin being in the offense together and going through different things, he made the adjustments.

"I was so proud of that because now he's figured out the entire scheme and how we run things and what our rules are. He doesn't have to think about it. He's not making as many mistakes as he did last year."

Meanwhile, Fidone, a 6-5, 220-pound native of Council Bluffs, Iowa, could be an immediate factor in 2021. He's learning to play the traditional tight end position as well as being split outside as a receiver. He's already making progress.

However, "The game is faster than he's ever experienced in high school," Beckton said. "He's got to understand the pace of play, how guys move. They're bigger, faster, stronger. Then he has to learn all the details that he wasn't coached in high school. He's got to understand details help you win routes, details help you win in blocking schemes and all those different things.

Beckton hopes Fidone becomes part of a tight end group that supplies the offense with more overall production this season and in coming seasons. Last season, the group averaged 4.3 receptions per game. It loses only 2020 senior Jack Stoll (seven receptions for 89 yards), who's now training in hopes of being selected in the NFL Draft.

This spring, Beckton is also working with true freshman James Carnie, a Norris graduate who's currently limited by a shoulder injury that dates to high school.

Nebraska offensive coordinator Matt Lubick is receptive to ideas on how to use tight ends, said Beckton, who studies tight end play throughout the college game and the NFL.

"One of the good things about Coach Lubick is he wants you to bring information to him," Beckton said. "So I made a cutup of some of the really good tight ends across the country. (Kyle) Pitts is one of them, down in Florida. I wanted to see how they're using that guy because we have guys who can really catch the ball and really get open."

Nebraska got a jump-start to its 2023 recruiting class on Friday when it landed a verbal commitment from Pierce tight end Benjamin Brahmer. He…

The report says as many as 10-12 may have already been discussed and none of the candidates "would qualify as finalists."

Huskers land verbal commit from Florida WR Victor Jones Jr., who wants to 'air it out' in Lincoln

Husker center Cam Jurgens' next challenge: 'Ultimate control' of not only himself, but OL room, too

Believe it or not, Cam Jurgens will likely be the most experienced member of the starting quintet up front in the fall. So what's next for him?

A columnist's conversation with a spokesman for the football gods may help Nebraska fans feel a bit better about Scott Frost's plight.

Nebraska's leading tackler in 2020, JoJo Domann embraces the notion of being a leader “on an emotional, physical and spiritual level.”

One area the quarterback is working on? Turnovers. As Mario Verduzco not-so-subtly put it, “No more frickin’ turnovers. That’s it.”

Athletic director Bill Moos said he hopes for a capacity as high as 75% for the spring game, depending on guidance from local health officials.

Nebraska's Austin Allen celebrates his touchdown catch with Brenden Jaimes and Ethan Piper against Minnesota on Dec. 12, 2020, at Memorial Stadium.