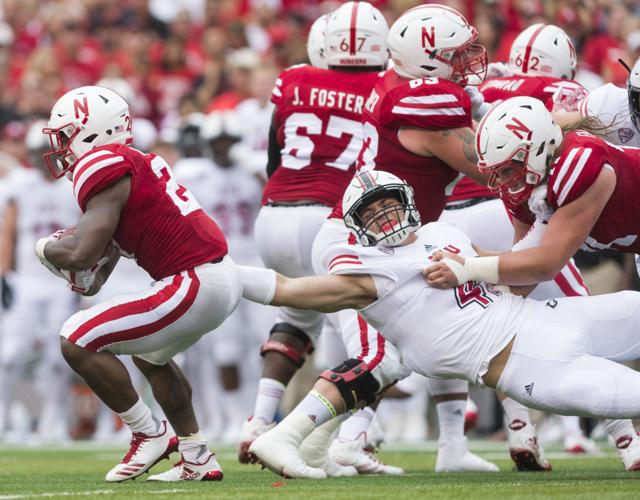 Nebraska running back Mikale Wilbon (21) gets some help from offensive lineman Matt Farniok (right) as he slips away from Northern Illinois' Christian Blake (4) in first-quarter action at Memorial Stadium on Saturday. 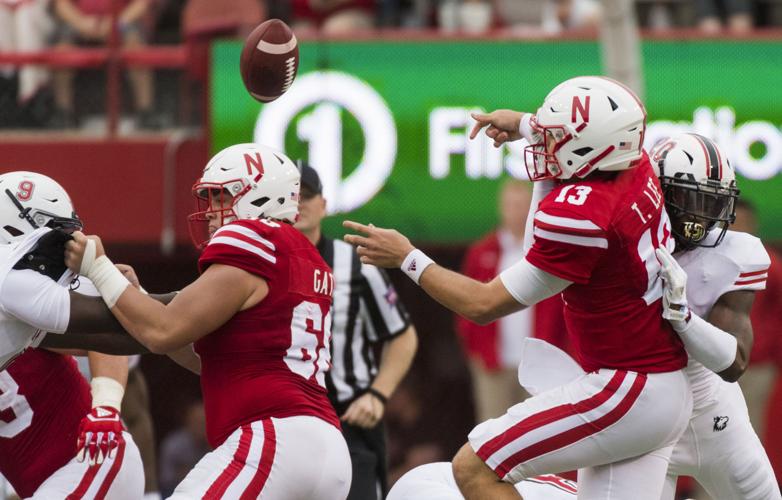 Nebraska quarterback Tanner Lee (13) is hit by Northern Illinois safety Mycial Allen (20) as he throws an incomplete pass in second-quarter action at Memorial Stadium on Saturday.

Nebraska’s starting offensive line Saturday against Northern Illinois trotted on to the field for the Huskers’ first series with 52 combined starts and 72 games played.

They collectively did not feel great about pass protection the first two weeks — position coach Mike Cavanaugh referred to it as, “just average” earlier that week — but had helped power a run game that averaged 5.0 yards per carry and placed sophomore Tre Bryant in the top 10 in the nation at 299 yards through two weeks.

In a demoralizing 21-17 home loss to the Mid-American Conference's Northern Illinois, though, the unit had trouble from the start. Monday, head coach Mike Riley said he thought the group struggled both with communication and technique against a defensive line it outweighed by an average of more than 40 pounds per man.

Sure, redshirt freshman Matt Farniok was making just his second start and Cole Conrad is playing center this year for the first time, but Riley admitted it was surprising to see a veteran unit struggle the way Cavanaugh’s did Saturday.

“Disappointed for sure,” Riley said. “Surprised? Probably. We certainly can do better than that. That’s re-examining our overall process of getting ready, that needed to be done.”

The Huskers managed just 85 rushing yards on 36 attempts against NIU (2.4 per carry). They had 39 negative yards as the Huskies racked up nine tackles for loss. By unofficial count, running backs Mikale Wilbon (24 carries) and Devine Ozigbo (two) met a defender at or behind the line of scrimmage on 18 of their 26 chances.

Quarterback Tanner Lee was sacked three times, not necessarily an alarming number given his 47 pass attempts, but he was hurried seven other times and forced to move around due to pressure often. He took several squared-up, crushing hits.

“I think they’re real hungry and I think we are all embarrassed,” Cavanaugh said Monday evening.

The problems spanned the entire line. Farniok got beat on speed rushes from NIU sophomore Sutton Smith multiple times. The Huskies interior linemen pushed back guards Tanner Farmer and Jerald Foster and center Cole Conrad. Left tackle Nick Gates overstepped to the outside and allowed a clean rush through for a hit on Lee that led to his second interception.

Offensive coordinator Danny Langsdorf said Monday that he felt NU could not dial up shots downfield in the middle of the game because the protection had, “a real difficult time." That included a pair of seven-man, max-protect situations that still allowed pressure on Lee.

“A couple of times when we got beat, it was flat out just bad technique,” Cavanaugh said. “Not setting correctly, leaning, your head’s down and you’re up on your toes — you can’t move your feet if you’re like that. We’ve got to become more detailed.

Neither, it seems, was the Huskers’ communication.

“It’s all the way down the line, it’s not just one call,” Cavanaugh said. “So it’s got to be echoed and we’ve got to do a way better job. Some of the things we talked about (today were) their assignment, and then obviously the adjustment, but the first thing I talked bout was communication. That’s huge.

“I don’t think they’re confused, I think they have to talk so we’re all on the same page. There’s six of us. … You never assume anything.”

Nebraska cannot assume it will have either of its top two options at right tackle against Rutgers, either. Farniok broke a bone in his wrist, according to Riley, and had a pin inserted. He may be available in some capacity, but Riley mentioned his role on the field-goal shield rather than right tackle. If senior David Knevel (ankle) isn’t ready to return to action, NU has a decision to make. It could start sophomore Christian Gaylord or true freshman Brenden Jaimes. Cavanaugh all but ruled out moving Conrad back to right tackle, where he started five games in 2016, and starting Michael Decker at center.

“I think our best guy at center right now is Cole,” Cavanaugh said.

Said Riley earlier in the day, “We talked about all of that, and one thing you have to be careful of is guys are placed as starters for a reason. And if we do that, are you weakening yourself at two spots too much? But those are all good questions and things that are being examined.”

Decker played a few snaps at center Saturday against NIU when Conrad limped off.

Cavanaugh said Jaimes and Gaylord split repetitions with the No. 1s Monday in practice.

“Gaylord is a guy that’s athletic,” Cavanaugh said. “Jaimes has a lot of great tools, he doesn’t really flinch, he’s a good athlete and he loves football. … We let them go (today) and we’ll watch the film and see how it looks.”

However the lineup shakes out, this is a veteran unit that throughout fall camp welcomed the challenge of being one of the roster’s strong points. In order for the offense to get back to the balance it showed in the opener, the line will have to be much better across the board.

As with all high-level employees of the University of Nebraska-Lincoln, a change in the athletic director or football coach would come only on…

Nebraska running back Mikale Wilbon (21) gets some help from offensive lineman Matt Farniok (right) as he slips away from Northern Illinois' Christian Blake (4) in first-quarter action at Memorial Stadium on Saturday.

Nebraska quarterback Tanner Lee (13) is hit by Northern Illinois safety Mycial Allen (20) as he throws an incomplete pass in second-quarter action at Memorial Stadium on Saturday.