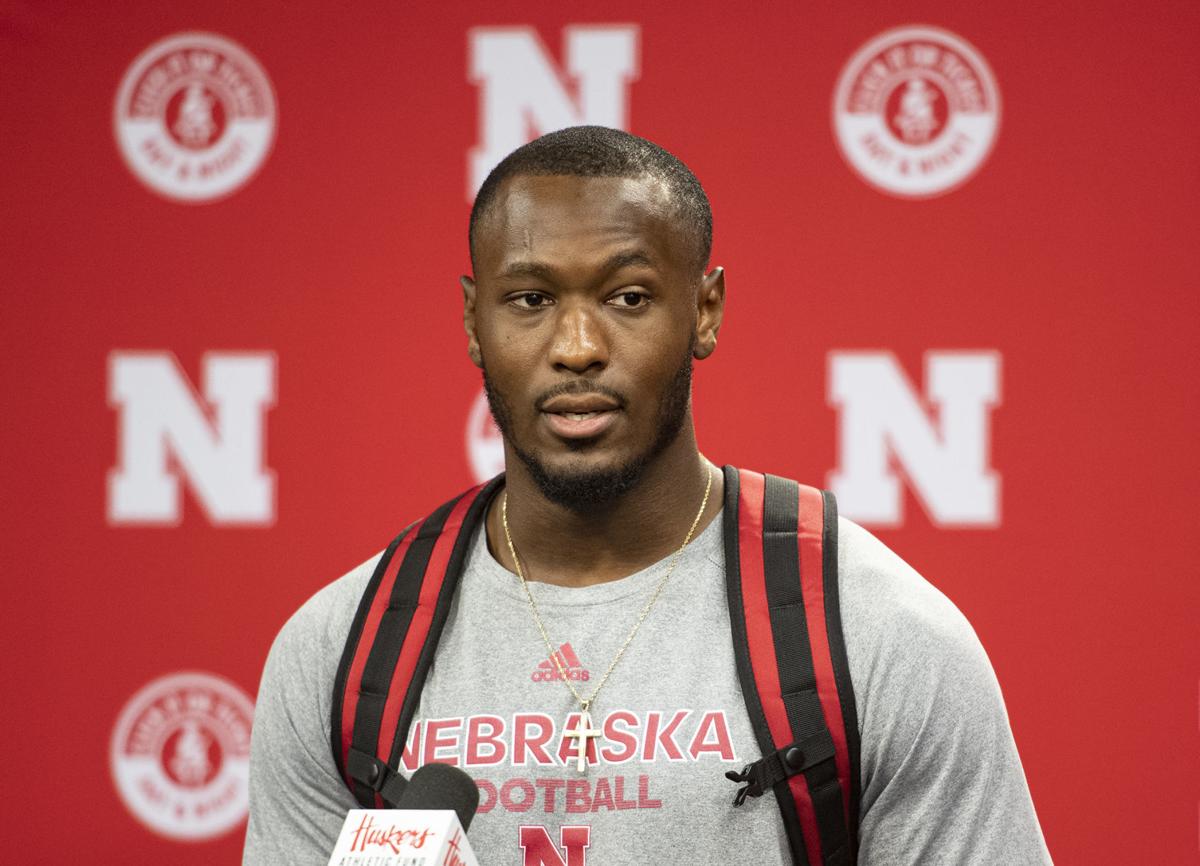 Outside linebacker Alex Davis answers questions on Aug. 1 during a news conference at Memorial Stadium. 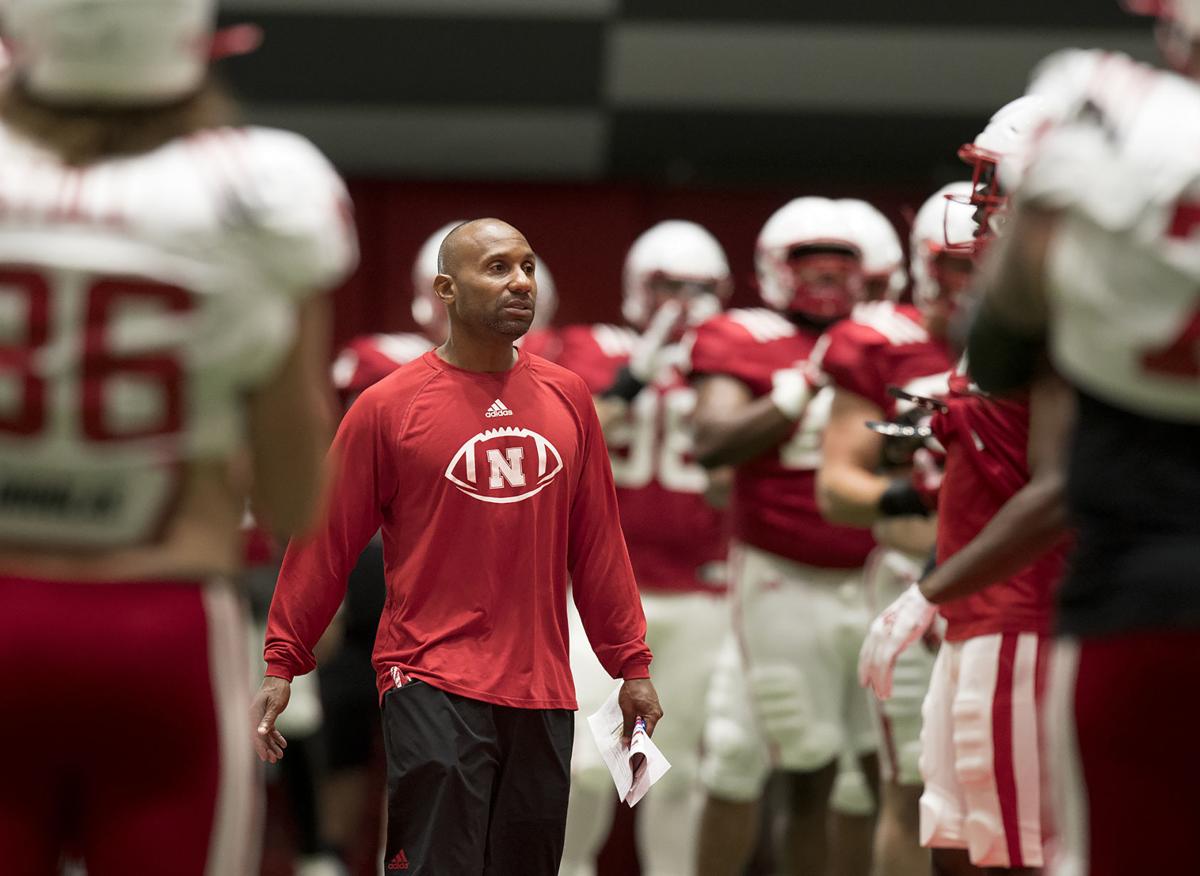 1. Husker head coach Scott Frost on Friday was the latest to laud the offseason work of senior outside linebacker Alex Davis.

The 6-foot-5, 250-pound Davis has always looked the part, but the production has not followed. In 37 career games (including nine starts), the Riviera Beach, Florida native has 24 total tackles. In 12 games last year (four starts), Davis had five total stops and just one unassisted tackle.

Frost and the coaches believe, though, that Davis has a chance to end his career on a positive note.

“Alex has always had the skill and the gifts to do it. I think for him it was just getting comfortable with the position,” Frost said. “He’s not a guy that’s played football his whole life; I think he was a basketball player growing up. And I think he’d be the first to tell you there were times last year when he was in the right place or doing the right thing, but at the moment of truth he didn’t go make the play. And some of that I think he was thinking too much.

“This year he seems to be cutting it loose, looks a lot better in pass rush. I’m anxious to see what he can do on the field. If he plays the way he’s practicing, he’s going to have a good year.”

2. Frost on Friday also said he likes the direction NU’s running back room is headed under Ryan Held.

Questions still remain — Maurice Washington’s status, Dedrick Mills’ workload, who’s next after those two, etc. — and one that’s interesting to consider is this: Who’s the game-breaker?

The most logical answer is Washington, who is a highlight waiting to happen given his open-field abilities. The interesting twist to that, though, is that he didn’t hit many (or any) home runs in 2018.

In 101 total touches, Washington produced 23 “chunk plays," categorized as rushes of 10-plus yards and receptions of 15-plus. That’s a strong percentage. Of those, his lone score came on a 28-yard reception up the left sideline against Iowa.

His three rushing touchdowns came from 8, 3 and 3 yards. That’s not to say he won’t take more long runs the distance this fall, only to say he hasn’t shown that part of his game yet. For reference: Devine Ozigbo turned his four longest runs in his senior season — 66, 60, 59 and 40 — into touchdowns and had eight “chunk-play” scores on the year.

Before the 2018 season started, Held accurately pegged Ozigbo as the home run hitter of the group, a comment that drew some raised eyebrows because the senior hadn’t shown that ability previously in his career.

Held last week gave a nod to freshman Rahmir Johnson as a player who could go the distance. Time will tell with Mills and Washington. Oh, and don’t forget about sophomore quarterback Adrian Martinez.

3. There’s a similar conversation in the wide receiver room.

Junior JD Spielman is a bona fide big-play threat and NU has high hopes for freshman Wan’Dale Robinson. Senior transfer Kanawai Noa is showing himself as a steady option so far, and Kade Warner draws praise for always being in the right spot.

As the Huskers and offensive coordinator Troy Walters look for other options to step up and claim playing time, though, the ability to stretch the field is going to play a big role. Senior Jaron Woodyard is a candidate, as is freshman Demariyon “Peanut” Houston.

Overall, Frost said Friday he thinks the receivers group can be “way better” than a year ago.

“Seven-on-seven looks different because we’re stretching the field, guys are running full speed, and we’re getting to spots we couldn’t get to last year,” he said.

4. Sports Illustrated ranked the top college football programs of all time this week as part of its coverage of the sport’s 150-year anniversary and Nebraska checked in at No. 7.

Oklahoma and Tennessee rounded out the top 10.

What say you, Husker fans?

5. There’s only so much to be gleaned from just more than two minutes of video footage published by the Husker football program’s official Twitter account from Sunday’s closed scrimmage, but here’s at least one observation:

Reimer is one of five freshman walk-ons to crack the 110-man camp roster, a feather in the cap in its own right, and physicality like that certainly will not go unnoticed.

6. Two skill position players in the 2020 recruiting class have included Nebraska in their top groups in recent days.

One is Lawaun Powell, a three-star wide receiver from East St. Louis, Missouri, who listed his top three as the Huskers, Illinois and Purdue. The other is Texas running back Frank Brown (Houston) who listed his top five as NU, Houston, Arkansas, Utah and Arizona.

I would like to thank all the schools that recruited me but at this point I would like to focus on these three schools
1. Nebraska #GBR #Huskers
2. Purdue #BoilerUp
3. Illinois #littyville pic.twitter.com/ROJjV02oJJ

Three-star running back Sevion Morrison (Tulsa, Oklahoma), who used an official visit to Lincoln over the summer, is set to make his college choice on Aug. 21 and Nebraska is widely considered to be in strong contention.

Nebraska currently has eight verbal pledges for its 2020 class, which is ranked No. 62 in the nation by the 247Sports Composite.

Good morning. We're less than two weeks away from game week in Lincoln. In the meantime, it's time for some breakfast links.

Nebraska freshman inside linebacker Nick Henrich is unlikely to participate during preseason camp, according to his position coach, but is sti…

Nebraska is a 4-8 football team until the Huskers prove they aren't.

Who's No. 28!? It's Husker walk-on Luke Reimer, who's made a quick impression this month

Lincoln North Star graduate Luke Reimer enjoyed a strong scrimmage Sunday. "We were like, 'Who's #28? Who is that?'" Husker sophomore defensive back Cam Taylor said Tuesday. "He's a walk-on, but he won't be a walk-on for long."

Former McCook standout Zach Schlager announced Tuesday that he is transferring from Colorado State's football program to Nebraska, where he'll…

Barrett Ruud expects top trio of ILBs to not only hold down the fort but excel in an otherwise inexperienced position group.

Outside linebacker Alex Davis answers questions on Aug. 1 during a news conference at Memorial Stadium.