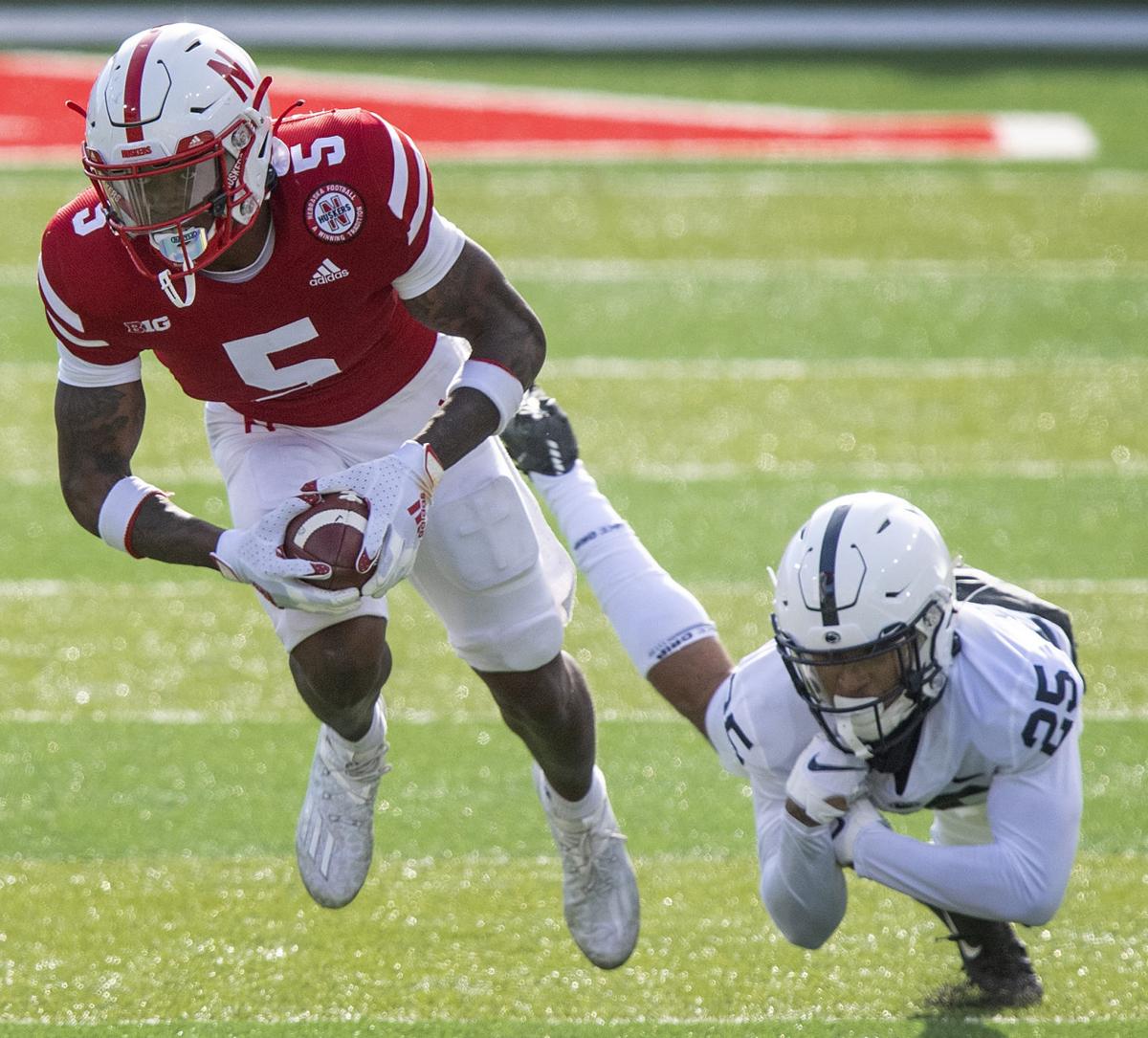 Nebraska's Cam Taylor-Britt (5) runs back a punt as he avoids the tackle of Penn State's Daequan Hardy in the first half Nov. 14, 2020, at Memorial Stadium. 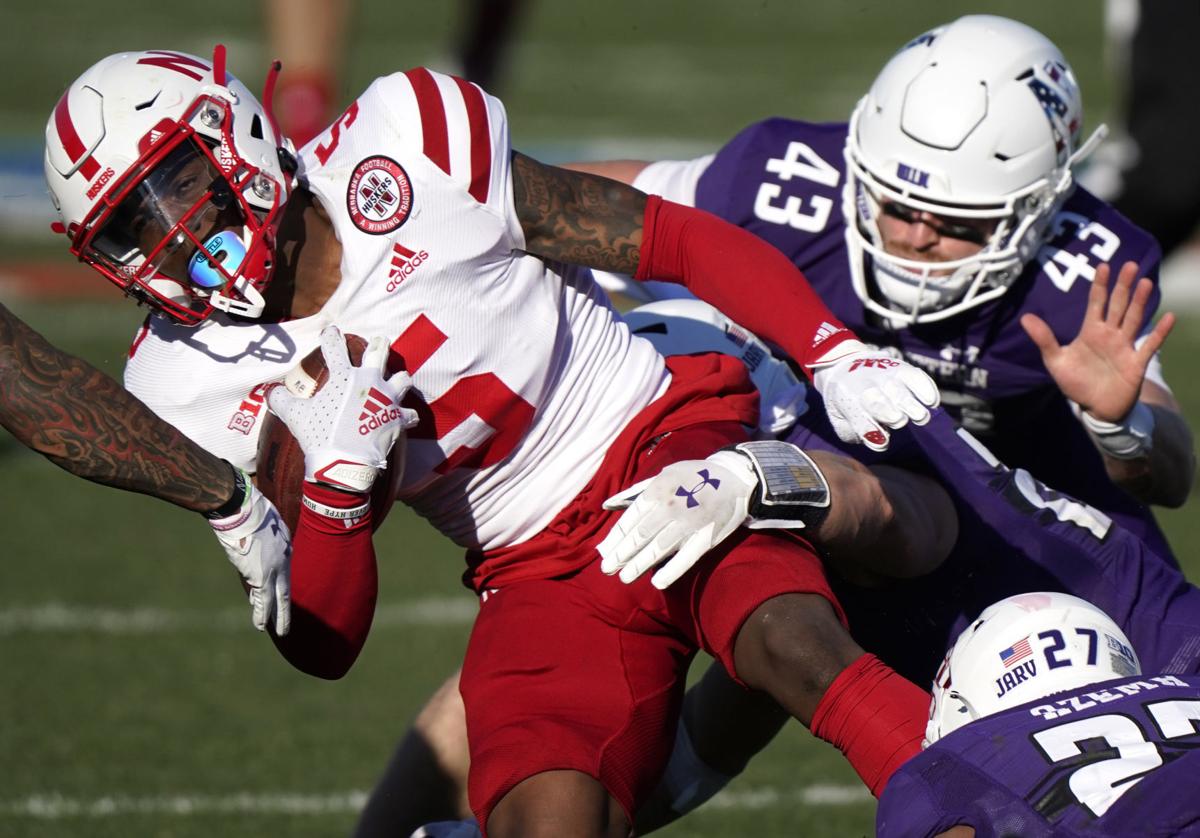 Nebraska defensive back Cam Taylor-Britt is tackled by Northwestern defenders  on a punt return on Nov. 7, 2020, in Evanston, Ill.

As Cam Taylor-Britt walked away from the makeshift news conference area in an open-air, ground-level concourse at Memorial Stadium on Wednesday afternoon following a 10-minute exchange with reporters, he looked at a school official with a big smile and said, enthusiastically and without a hint of sarcasm, “I love doing these.”

The standout junior cornerback might have been a little more excitable than usual — a moment of editorializing here: in-person interviews this spring, even with the slightest of inconveniences like social distancing and question-asking through masks, is a resoundingly welcome relief from Zoom Life. But the bottom line is that Taylor-Britt has plenty to be excited about.

He’s back for a fourth season at Nebraska after what he called an easy decision to put off the NFL Draft process for one more year. He’s got veterans all around him in the secondary, a hot competition for the starting cornerback job on the other side of the field and daily challenges in practice from a receiver corps that he says is much improved from the past two seasons.

With the recruiting dead period expected to end, get to know the six Husker targets planning to visit Lincoln on June 4

And he was not shy about sharing his excitement this week.

“The group is great,” he said of the Nebraska secondary. “Just being a veteran now is crazy to me. I was just the young guy coming up here and speaking on the older guys. The young guys in the room are really taking on the coaching, I can say, they’re always in (secondary coach Travis Fisher's) office and always asking questions.”

While discussing the competition at cornerback, Taylor-Britt was asked who has been backing him up so far this spring.

The 6-foot, 200-pounder was named second-team All-Big Ten by the conference’s coaches in 2020, his best collegiate season to date. Taylor-Britt has always had a knack for making plays, but last fall became a dependable cover man while adding a pair of interceptions and six passes defended. Not only that, but he averaged 13.2 yards on six punt-return attempts and said he could add kick return duties to his plate in 2021.

Whatever jobs the Montgomery, Alabama, native manages to talk his way into, he said he plans on being a better player in 2021 than he was last year.

Watch now: Scott Frost breaks down depth at WR, looks ahead to hosting fans for practice

“I really didn’t have a decision on coming back or leaving,” he said. “I’ve got this little chip on my shoulder right now and I’d say the chip is that I didn’t play to my ability. I know people say I played well or this and that, but I feel like I have a lot more in me.”

As for that competition across the field from him? Taylor-Britt quickly rattled off four players in the mix, including Quinton Newsome, Nadab Joseph, Braxton Clark and Tamon Lynum. Freshman Marques Buford Jr. is out for the spring with an undisclosed injury.

“On the other side, it’s rough right now, and when I say rough, the competition there is really good, really good,” Taylor-Britt said. “I believe Coach is going to have a hard time picking who’s going to be the starter because we have a lot of good guys. …

“Those guys come in every day and they’re looking at each other right in the face and letting you know that, ‘I’m coming to work today, I hope you are, because I want that spot.’”

Where each Husker quarterback stands at midpoint of spring ball, according to Scott Frost

Frost and HUusker players covered a lot of ground with reporters after NU’s seventh spring practice Monday. Here are some quick hits.

Steven M. Sipple: If NU is looking for leaders, it may do well to start with its fatherly safeties

Safeties Deontai Williams and Marquel Dismuke surely are among the strongest leaders on Nebraska’s roster. Listen to them. They just have to be.

For Husker WR corps in 2021, familiarity may be one key to increased production

The Husker receiving group, with few players who have seen much time on the field at NU, seems to be getting the offense down this spring.

Tuioti: “I love it here, but I haven’t been happy the past two years because I know we can do better." How? He shares a few ways.

Husker football to allow up to 4,000 fans into April 17 practice at Memorial Stadium

The Huskers will allow 4,000 fans into Memorial Stadium for the workout, which is scheduled for approximately 2:15-4:45 p.m. Details here.

In last year's finale, the Huskers started three freshmen on the offensive line for the first time ever. The team rushed for 365 yards.

Red Report: Farmer not quite 100 percent; receivers 'way better;' and keep an eye on Payne

Life in the Red: One draft analyst's thoughts (and mock draft landing spot) on Brenden Jaimes

Could the former Husker offensive lineman be the highest NFL Draft selection in the last three or four years? One expert thinks so.

Nebraska's Cam Taylor-Britt (5) runs back a punt as he avoids the tackle of Penn State's Daequan Hardy in the first half Nov. 14, 2020, at Memorial Stadium.

Nebraska defensive back Cam Taylor-Britt is tackled by Northwestern defenders  on a punt return on Nov. 7, 2020, in Evanston, Ill.