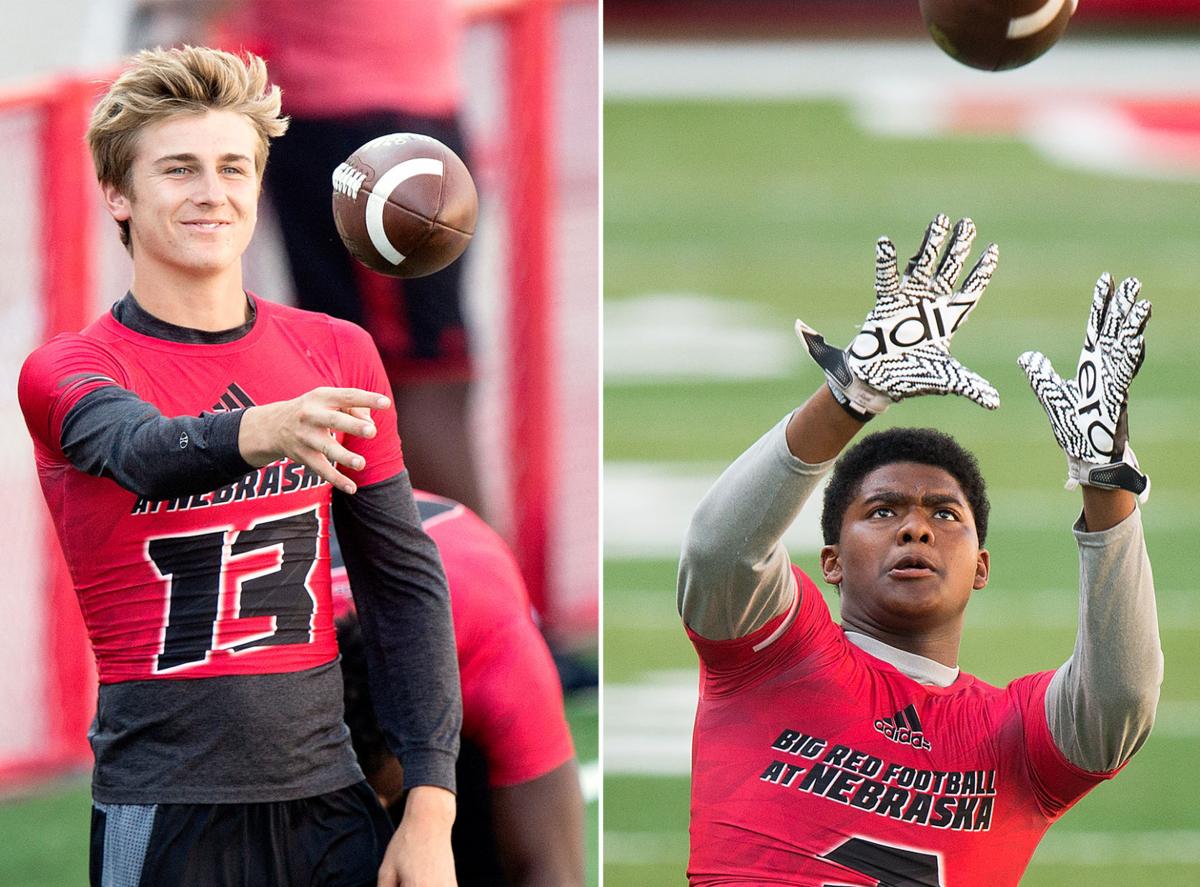 Calabasas' Tristan Gebbia (left) and Keyshawn Johnson Jr., committed to Nebraska within weeks of each other. Both will be on campus in the coming weeks.

Tristan Gebbia threw for 13,109 yards and 141 touchdowns in high school.

Tristan Gebbia completed 858 passes and threw for 13,109 yards and 141 touchdowns in high school competition, but right now he is remembering a specific throw when ball met turf.

It's top of mind because it was the first pass he ever threw in a game to Keyshawn Johnson Jr., his chum and future college roommate and fellow face in a "Calibraska" movement that eventually found its way on T-shirts sold in Nebraska stores. Still weird for them to think about that. Did that really happen? Really it did.

The story can turn to T-shirts and dealing with expectations set close to the clouds soon enough, but first, that pass. It gives you some insight into Gebbia that the quarterback still remembers a throw late in a game of his sophomore year most would have forgotten by that night's postgame taco run.

"I just remember taking a bunch of hitch steps and throwing this dig route. I think it was the hardest pass I've thrown in my career," Gebbia says. "It kind of bounced off his chest and went straight in the air. I was thinking, 'Yeah, I probably should have taken some heat off that one.'"

They'd get on the same page soon enough — on the field and off. That summer after their sophomore year, Gebbia says the two played 120 games of "Madden" against one another over the span of two months.

Something more than a video game bond, though. "We're like brothers," Gebbia says.

Now the quarterback and wide receiver from Calabasas High School in California are inside of two weeks until they show up to Lincoln on Jan. 5 as early enrollees, allowing them to participate in winter conditioning and spring football. They fully understand the challenge ahead, and embrace it all the same.

It sure doesn't hurt they're taking it on together.

"I came in thinking he was going to be a guy who didn't really talk or went through the motions," Johnson says. "Then I started to really understand and meet the kid, and I started to see that this guy is someone you would want to go to battle with. Someone you would be on the front line of an army with. He's the definition of a leader, in my opinion.

"I listen to him as much as I can when it comes to football. If something happened wrong, we're always coming together. 'What happened?' We figure it out. We figure out how it's going to work the next time."

It just so happens the next time will be in Lincoln, Nebraska.

They will arrive with as many eyeballs on them as anyone in this Husker recruiting class.

Gebbia, because he is the four-star quarterback and the new QB on the block always gets imaginations dancing.

Johnson, because of his receiving talents that attracted big-time programs and also, maybe-ya-heard-this-one, he's the son of former NFL standout and No. 1 draft pick Keyshawn Johnson Sr., who played for Mike Riley when he was the offensive coordinator at USC.

"That's kind of how it has been my whole life. … I obviously have the last name, the first name and the Jr. on it," he says. "You obviously have to take that into account. I know that I have to go out there and do what people think I'm going to do. It brings a lot of pressure, but I'm used to it."

He recalls some of the best advice he's received from his father: Be your own person.

"Just make sure I leave a mark … and make sure it's a good mark. Always be a leader …" he says of his father's message. "He motivates me to be better in everything. I get compared to him so much, but how can you be better than the No. 1 draft pick? Exactly."

Even so, there's nothing wrong with taking aim at even the toughest targets to reach if it makes you better.

Johnson has been committed to the Huskers since March 23, and Gebbia since April 5. They've been to Lincoln for summer camps and games, and tried to peer recruit others into the class, but now they're about to officially be part of it all.

"It's definitely a weird feeling that it's actually here now," Gebbia says. "Because you keep sitting back saying, 'All right, get through these last couple months of high school, do the best you can,' and here it is. Now we're going. College football."

Remember that kid on the playground who always wanted to be "all-time quarterback?" He'd spend recess throwing touchdowns to both teams.

Basketball and baseball had his attention, too. But that arm was meant to throw a football. Besides, it's in the genes for him, too. His dad, Rich Gebbia, was a tight end at Ole Miss.

The natural gifts, though, wouldn't shine through as brightly without much hard work. The 6-foot-3, 180-pound quarterback has studied the position closely. His head coach at Calabasas, Casey Clausen, played QB at Tennessee. Gebbia has also worked closely with other quarterback teachers such as Steve Clarkson and Rudy Carpenter, who played at Arizona State.

Gebbia just finished a season where he threw for 5,338 yards and 65 touchdowns. He completed 341 of 455 passes (70 percent) and had a quarterback rating of 136.7. His 13,109 career passing yards are second all-time in high school football in California, only behind Jake Browning, who is now starting at Washington.

He could certainly pound his chest about that, but Gebbia passes off the praise, saying he's benefited from throwing to receiver talents such as Johnson, Darnay Holmes, Brian Hightower and Johnny Wilson during his high school career. All are big-time college prospects.

"I'm just glad I could play a part in it," Gebbia says. "The good news is with those numbers, they got me to a place too, so I'm real happy about that."

That place he's headed to also happens to have an open starting quarterback job after the position has been manned consistently for 3½ years by Tommy Armstrong.

Certainly Gebbia will be playing catch-up to junior Tanner Lee, who has already played two seasons of college ball at Tulane, and Patrick O'Brien, last year's ballyhooed Husker QB recruit who learned while redshirting this fall.

"There's competition anywhere you go at a D-1 university," Gebbia says. "I'm excited to get there and compete. There's going to be a lot of hard work ahead of me, but I'm going to do a lot of things right and learn from my mistakes really fast."

While visiting for a Friday Night Lights camp in the summer, Gebbia and Johnson got an early taste of how it might feel, throwing and catching touchdowns inside Memorial Stadium. A couple thousand fans cheered loudest when Gebbia connected with his buddy on a routine passing drill.

Gebbia said that weekend there was a "magical feel" to throwing in that stadium.

He also said this: "There's not a day that goes by that I don't think about playing in that stadium and doing really great things."

The attention can blow you away if your feet aren't planted firmly.

Gebbia remembers the first time he and Johnson realized people were actually walking around campus in "Calibraska" T-shirts that were being sold in Nebraska stores.

"It was kind of like, 'We haven’t even done anything yet.' The people are going crazy," Gebbia says. "It's kind of a weird feeling. It feels cool and it's a little bit overwhelming at times."

At one Friday Night Lights camp, even Mike Riley had the shirt on.

Johnson thinks it's kind of cool, and enjoys the social media interaction with fans. Like when he asked a few weeks back if there were any places to get good pho (a Vietnamese soup) in Lincoln. There was quick feedback that yes, there is fine pho here.

"Sometimes it gets pretty mind-boggling. It kind of messes with your mind," Johnson says of the attention. "Makes you kind of feel like you're somebody that you're not. Reading your news clippings every single day. Kind of just boosts up your head a little bit. It's like a good thing and bad thing at the same time."

Leaving behind your high school friends and family a semester early has its drawbacks, too, though Johnson plans to go back for graduation and prom.

"I even talked to my dad sometimes about it," Johnson says. "But I also have to think of the expectations that I have. I know that I have to be like this, I have to do well ... and get ready for college football, big boy football. ... It's not bad, just a new chapter."

That page turns the first week of January. Johnson says his family will make the trip with him to help move in. It's more than 1,500 miles from Calabasas to Lincoln.

Travel all that way and see the same guy you've been catching passes from for three years.

"It's surreal. Being able to go to college with my best friend ..." says Johnson. He laughs at the thought. "It's pretty cool. Pretty much all we've been looking forward to since we committed."

Kids and their video games, I tell ya what.

The college football coaches of America have spoken. They want a 10th full-time assistant and an early signing day.

Driving for 6: Picking some class favorites

Let's go on a drive.

How many Californians would you guess Ohio State has on its football roster? Or the Big Ten champions Penn State?

Tristan Gebbia, Keyshawn Johnson and the Calabasas (California) crew are a victory from state championship gold.

For Husker QBs Lee, O'Brien, competition for 2017 is already ongoing

It was about a half-hour after the last of the seconds had melted away from the 2016 Husker football season. Danny Langsdorf had fielded quest…

Can Husker recruiting produce a memorable weekend in San Antonio?

You know, San Antonio has been pretty good to Husker football. Down there amid the River Walk revelry in the land where Popovich treads, that'…

Calabasas' Tristan Gebbia (left) and Keyshawn Johnson Jr., committed to Nebraska within weeks of each other. Both will be on campus in the coming weeks.

Tristan Gebbia threw for 13,109 yards and 141 touchdowns in high school.