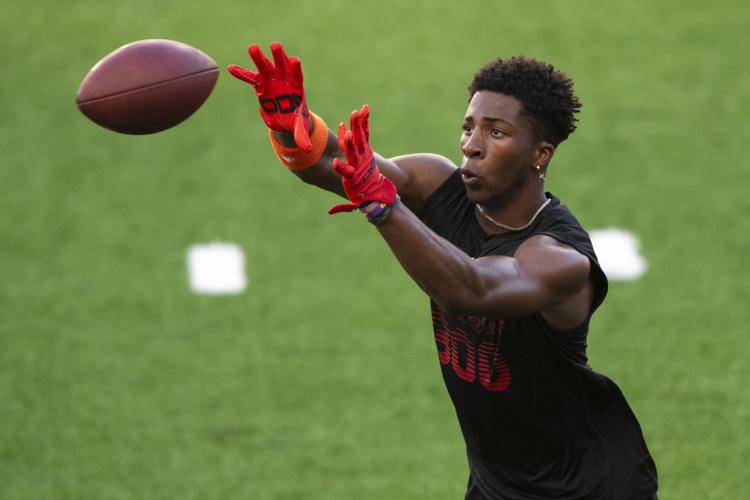 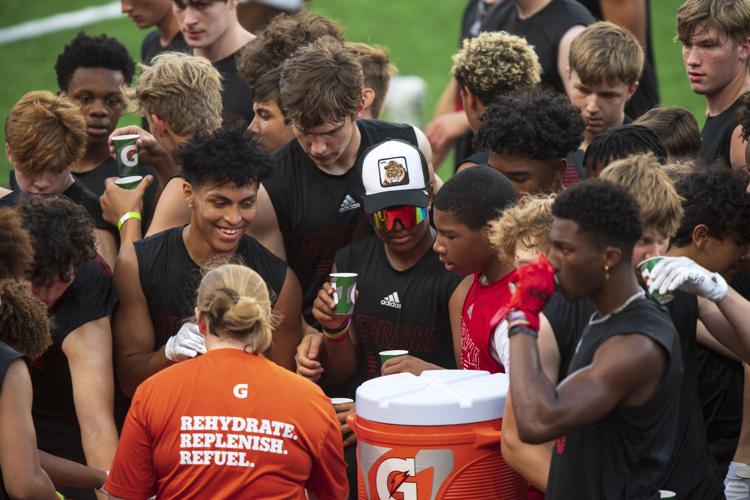 Campers gather around the water station during a break in the action at Nebraska's Friday Night Lights camp on June 17, 2022, at Memorial Stadium.

The sun went down and the breeze rolled in. So did more than 330 campers at Nebraska’s second Friday Night Lights event.

Perhaps a quarter of those players were on NU’s radar headed into the night. The prospect right at the center of the radar — perhaps the top in-state recruit for 2024 — bolted out of his breaks a little quicker than most of the receivers.

That’d be Bellevue West wideout Dae’Vonn Hall, the four-star, top-100 prospect who had nine touchdown catches last season for one of the state’s best teams and has offers from NU, Iowa, Wisconsin and Minnesota, among others.

Hall, at front of his line all night, worked through the series of drills laid out by receivers coach Mickey Joseph.

Many of Joseph’s teaching points focused on footwork and change of direction, as Hall and dozens more navigated around small cones in sharp, 90-degree turns designed to test a receiver's ability to keep his speed through quick adjustments. Joseph stood just outside the drill, exhorting wideouts to keep moving their arms as they ran, the better to keep balance. Joseph also used a metal arch, of sorts, to keep receivers low on their breaks.

The back half of Friday Night Lights always involves a series of pitch-and-catch drills that culminates in the popular one-on-one events that go into the south end zone of Memorial Stadium. Before those, NU’s offensive coaches put quarterbacks and receivers through an innovative drill that had four quarterbacks throwing simultaneously to four receivers all running different routes. It tested the players’ ability to focus not only on their assignment, but the ball meant to come their way.

The 6-foot-1, 190-pound Hall aced the exam. Given a post route, he angled his assignment at the right spot and snagged with his hands a slightly overthrown ball in the middle of the end zone.

The Huskers had had dozens of prep quarterbacks on hand, including several in the 2024 and 2025 classes who may collect more offers as they go through recruiting cycles. Wheaton (Illinois) St. Francis quarterback Alessio Milivojevic, a 2024 prospect, had a strong throwing session. He has offers from Mississippi and Bowling Green so far. He threw for 1,517 yards and 11 touchdowns last season as a sophomore.

Nebraska’s Adidas Pipeline Camp for offensive and defensive linemen is set for a scorching Saturday afternoon. That camp, which began early in the Scott Frost era, tends to attract younger linemen still in the developmental stage.

Florida State transfer Chubba Purdy is making fast friends at Nebraska this summer after axing the cleats that hurt his foot.

Nebraska landed its eighth commit for the 2023 class - and the first defensive lineman - on Monday when Argyle (Texas) standout Riley Van Poppel picked the Huskers.

Turner Corcoran got tired of waiting. But, he details how he remained productive while sitting out the spring with an injury.

Casey Thompson has two goals this summer — be a leader, master Nebraska's playbook

Within the Nebraska quarterback's to-do lists are two overarching goals The Husker thinks it might be a grind — if he didn’t love football so much.

At a youth camp in Papillion, Husker defensive lineman Nash Hutmacher — up to a 800-pound squat — said he is confident in Nebraska's new-look defensive front.

Three-star linebacker Hayden Moore has committed to Nebraska football. And with a 90 mph fastball, he could be a two-sport athlete for the Huskers.

Campers gather around the water station during a break in the action at Nebraska's Friday Night Lights camp on June 17, 2022, at Memorial Stadium.