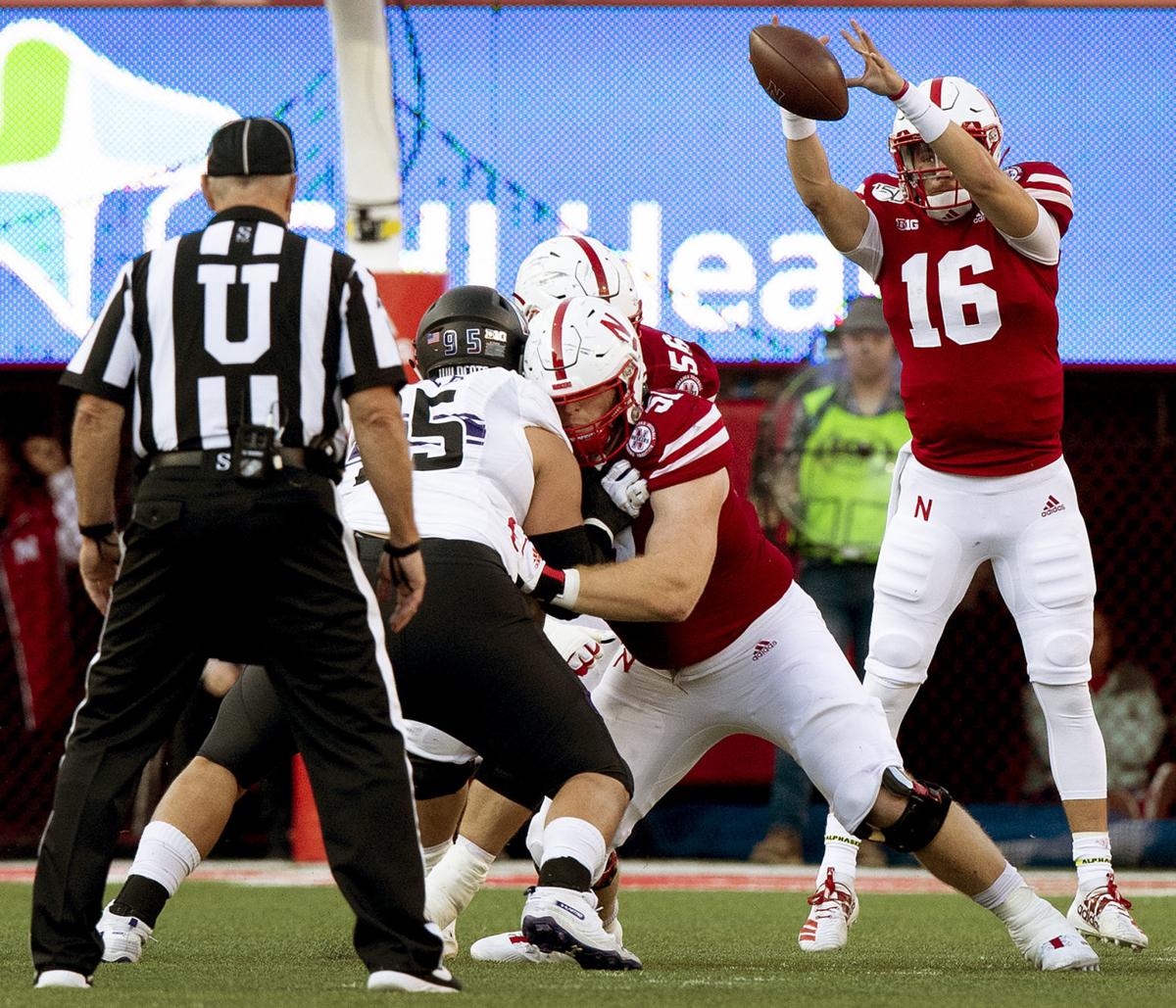 Nebraska quarterback Noah Vedral (16) reaches up for the high snap from center Cameron Jurgens in the fourth quarter against Northwestern Saturday at Memorial Stadium.

Matt Farniok turned a few heads Monday when the junior captain said there was no excuse for Nebraska's continued issues with off-target snaps throwing off the timing of the Husker offense.

It's on the entire offensive line, Farniok said, to help redshirt freshman Cameron Jurgens rectify an issue that has cropped up in nearly every game Nebraska has played this season.

"In Week 7 we need perfect snaps, and it's just the number one rule of our center and that's what we expect from our center," Farniok said. "He knows he needs to fix it, and he has been working on it."

On Wednesday, offensive line coach Greg Austin shed light on how the snap problem is the responsibility of everyone, not just Jurgens.

"Everybody's shortcomings and their successes is on the offensive line. Certainly I take just as much blame as anybody for the snaps, and we've got to fix it," Austin said. "And when (Farniok) said the whole line, there is no one individual person in any offensive line. Yeah, we're looking at Cam and a snap that goes over a guy's head or is mishandled, but that's on the right tackle, that's on the left tackle. We have to hold him accountable, everybody has to hold him accountable. That's the reason why we say it's on the whole line."

Austin equated the issue to a team struggling to keep its quarterback from getting hit.

Two-Minute Drill: The latest on QBs and running backs

Parker Gabriel and Steve Sipple give insights on quarterbacks and running backs from Nebraska offensive coaches after practice on Oct. 9, 2019.

Austin said Jurgens' issue is about technique. When the first-year center gets fatigued, Austin said, is when the issue shows up the most. There are also times Jurgens is anxious about coming off the ball and doesn't use proper technique.

"It's not a fundamental deal, it's more a focus deal. And that's what we gotta continue to work on, is continuing to calm him down," Austin said. "When he gets tired, it's just like anybody — technique goes to s-&thinsp-&thinsp- when they get tired. And unfortunately his snaps, as a new guy in his position, that's what affects him. So that's what we're working on right now."

Most of Saturday's off-target snaps came in the first half. However, with Noah Vedral behind center in the fourth quarter, one snap went wide right and through his hands, forcing the quarterback to retreat and grab the ball before eventually throwing it away. Another was high and to the right that Vedral was able to corral.

So, Austin and the offensive line will continue to search for the right buttons to push to try and shepherd Jurgens forward in his development. There's a delicate balance, Austin said, in pushing a player to mature, but not ruining his confidence in the process.

Nebraska head coach Scott Frost said Monday the onus was on Maurice Washington to respond well this week in practice to last week's first-half benching against Northwestern, and running backs coach Ryan Held said the sophomore has done just that.

Nebraska sophomore quarterback Adrian Martinez was present at practice Wednesday morning and wearing full pads, but his participation level an…

Jackson knows he should have returned late INT, but Chinander calls it 'huge play' in D's progress

Lamar Jackson had just made arguably the biggest play of his career on Saturday at Memorial Stadium, but he thought he should have done more.

Nebraska's class of 2020 secondary is going to have a distinct geographic flavor to it. The verbal commitment of Ronald Delancy III on Tuesday afternoon marked the Huskers' third defensive back commit from the state of Florida.

McCaffrey 'got the juice flowing a little bit' in his college debut, ready for next opportunity

Even with Adrian Martinez hobbled by an apparent knee injury, Luke McCaffrey says the Nebraska reserve quarterbacks' mental approach to preparation this week is the same as it is any other week. "Every week's a game week and no matter who's playing everybody's got to be ready for game day."

Husker Extra's Chris Basnett takes a look at Minnesota ahead of Saturday's game against Nebraska.

Thursday's report examines the uncertainty at both quarterback and kicker as Nebraska travels to Minnesota this weekend. Plus, Maurice Washington earning praise after suspension and a pair of Huskers nominated for national honors.

Nebraska quarterback Noah Vedral (16) reaches up for the high snap from center Cameron Jurgens in the fourth quarter against Northwestern Saturday at Memorial Stadium.