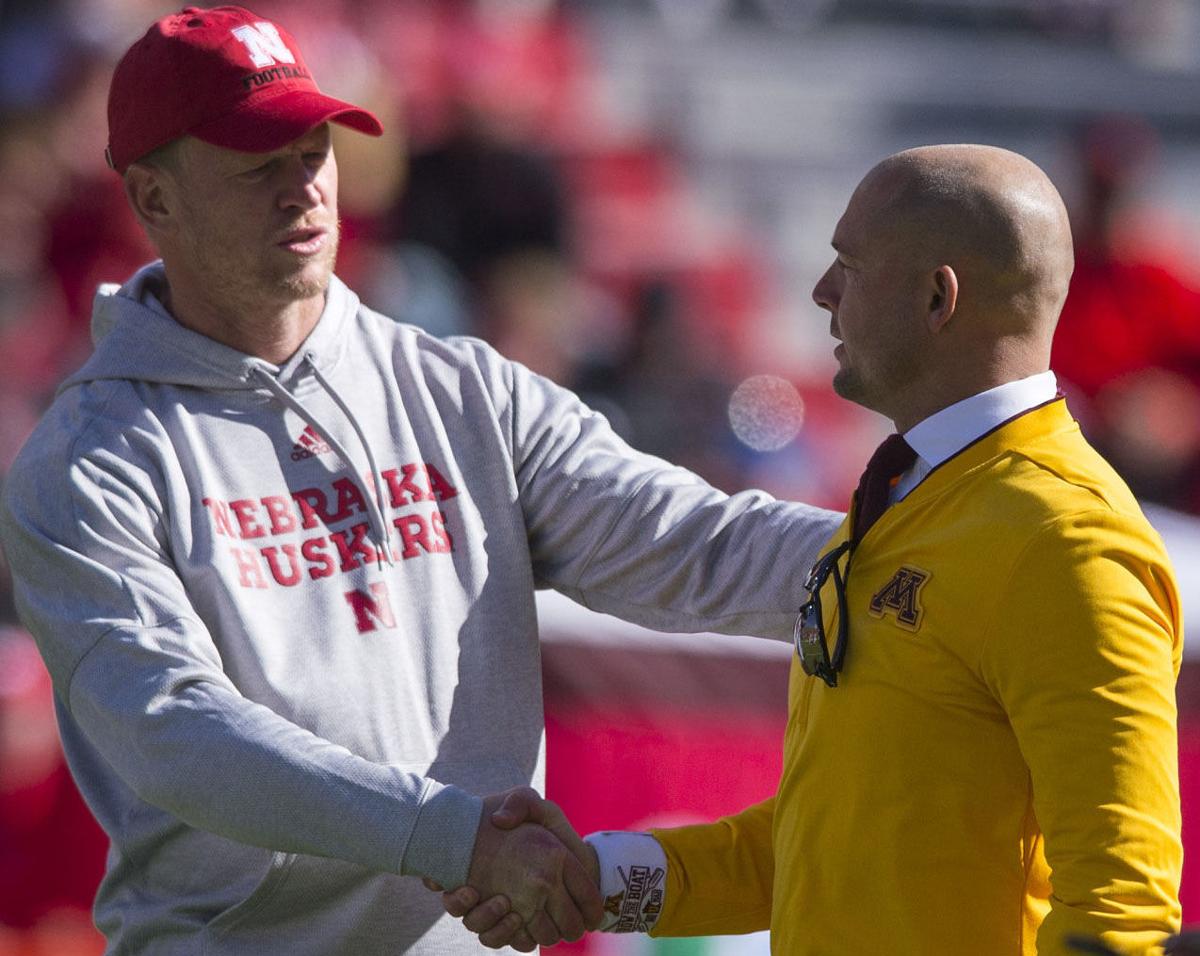 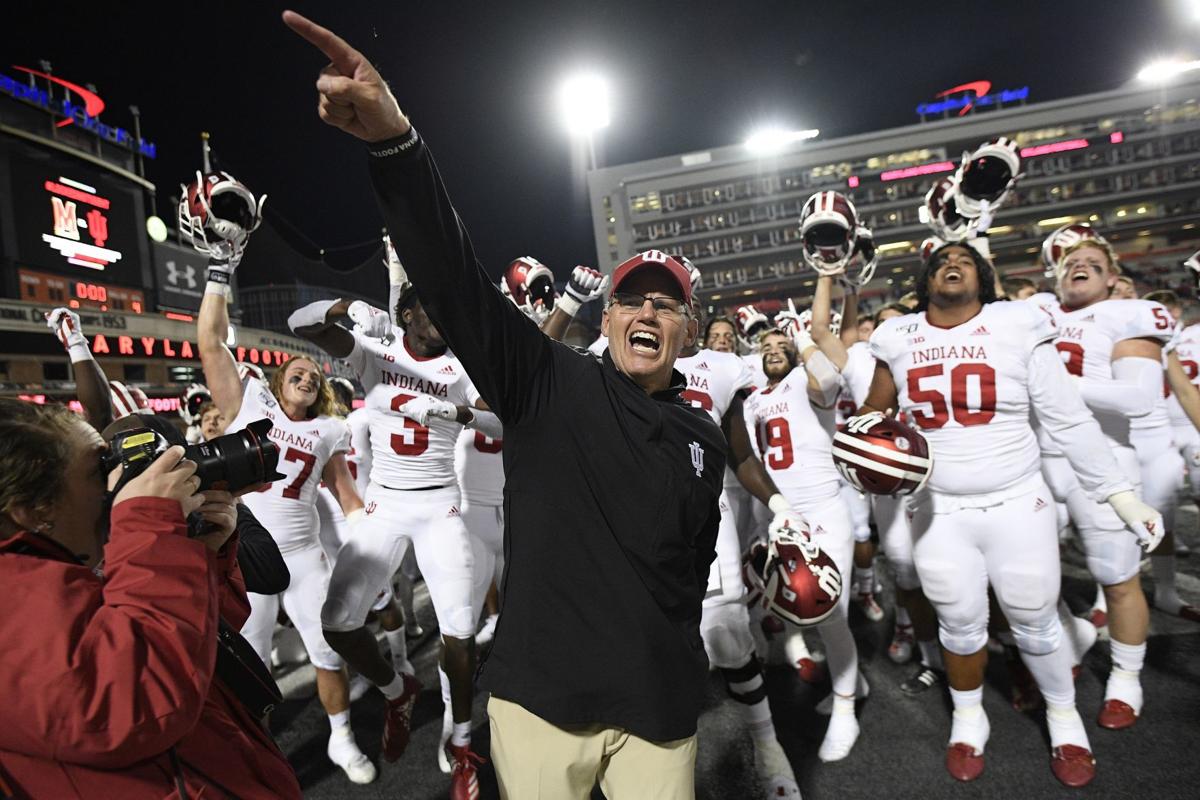 Indiana head coach Tom Allen (center) celebrates Saturday with his team after their victory over Maryland in College Park, Md. on Oct. 19.

While Nebraska used its second bye week looking for ways to resuscitate a season teetering on lost in part due to a three-game losing streak, three teams who have actually made the sort of gains the Huskers were hoping for this fall each had good weekends.

P.J. Fleck’s third Minnesota team, which caught some offseason love to help offset a healthy dose of skepticism, announced its arrival on the national scene by knocking off No. 4 Penn State and improving to 9-0.

Further south in the Big Ten West, Lovie Smith’s fourth Illinois team, who was almost unanimously pegged as the division’s cellar dweller and the one team out of seven that had no chance of playing in Indianapolis, won its fourth straight game in dramatic fashion over Michigan State and became bowl eligible at 6-4.

In the Big Ten East, Tom Allen’s fourth Indiana team had a bye week after running its winning streak to four. The Hoosiers jumped into both The Associated Press (No. 24) and coaches’ (No. 25) polls, hit mid-November ahead of Michigan in its division and, likely or not, is playing for a shot at up to 10 regular-season wins.

You never know exactly when a team might turn the proverbial corner. A year ago, Minnesota, Illinois and Indiana combined to go 16-21 overall and 7-20 in Big Ten play. So far this fall: 22-6 and 14-5.

Remember, even at the beginning of this season, UM squeaked out its first three games against FCS South Dakota State, Fresno State and Georgia Southern.

“Then you started to see this team develop,” former Ohio State coach Urban Meyer said on Fox’s College Football Extra on Saturday night. “That’s a tribute to that coaching staff, Coach Fleck and that staff. They’re really good. I noticed that about three to four weeks ago, I was doing a (Big Ten Network) segment, I ran it back and I said, ‘That’s Minnesota?’”

At Illinois, most wondered if this was Smith’s last chance, and many assumed it probably was. Now the Illini have a four-game winning streak of their own, are going to a bowl game and have a chance to make more waves before the month is out.

Cornerback Cam Taylor-Britt talks about the team's attitude on Nov. 11, 2019.

Those situations, each similar but unique in their own ways, help illustrate multiple conversations currently pertaining to Nebraska football. First, the Big Ten isn’t getting any easier, as the Huskers and second-year head coach Scott Frost have learned. NU dominated Minnesota and Illinois both in 2018. This year, the Huskers got blown out by the Gophers and now a 42-38 win at Illinois in September looks like easily their best of the season so far.

Frost, of course, would love to see a similar run in Lincoln over the season’s final three games as his team comes off a bye week and prepares for a closing stretch that begins Saturday against Wisconsin, continues at Maryland on Nov. 23 and concludes Black Friday (Nov. 29) against Iowa.

He said Monday he’s seen growth from his program this season on offense even if that growth isn’t showing up necessarily in the win-loss record.

“I think there has been a lot of progress made. I don’t think you can always see it because some of it has not been made in other areas just because of circumstances with some things,” Frost said. “We are playing some young guys on the offensive line. I think they can continue to get better. I think we have had solid play from our tight ends. The running backs have played well at times. It’s been kind of a revolving door back there a little bit with injuries and other things.

Quarterback Adrian Martinez talks about his performance against Purdue on Nov. 11, 2019.

“There are definitely some areas where we’ve improved. We need the rest of the pieces to catch up with that improvement.”

That, to put it simply, is what’s happened in Minneapolis, Champaign and Bloomington this fall. Change doesn’t happen suddenly, but it’s showing through clearly in Fleck’s third season and Allen’s and Smith’s fourth.

Meyer made it clear he didn’t believe in Minnesota, for instance, as recently as September.

“That’s another way to measure a coaching staff is, 'How does it take off or go throughout the season?,'” he said. “At the beginning of the season, I kind of said, ‘Let’s move on. Who’s it really going to be in the West?’”

Part of what drove offseason expectations for Nebraska was its 4-2 finish in 2018, but that run hasn’t led to the sort of improvement in the win-loss column that many expected. Other programs have taken off while the Huskers remain stuck in some of their old habits, trying to achieve the changes they’re sure are happening to reach point where it starts showing up on the scoreboard.

“I think what it shows you is, in this league, a play here and there is going to make a difference in games, and that happened in that game,” Frost said of UM’s win over Penn State. “In this league and really anywhere in football, when things are going well for you and you’re on a roll, you can kind of catch that momentum and ride it. And when it’s going the other way, it seems like bad things happen to you over and over.

“You’ve got to try and be one of those teams that gets some momentum like they have.”

Watch: Domann on preparation for Wisconsin standout running back Taylor

Watch: Domann talks matching up against a 'big' Badgers offense

No. 15 Wisconsin at Nebraska

As the Nebraska football team gets back to work after the bye week, coach Scott Frost is prioritizing efficient offense to snap a six-game skid against Wisconsin. Plus, other notes include a freshman rising up the depth chart and the team's final scholarship awarded.

The final piece of the Nebraska football team's 2019 schedule is in place.

Nebraska second-year head coach Scott Frost would be operating with haste if he began making staff changes now. Let's see what his program looks like once it has a roster full of players that his staff recruited -- with veterans who came up in the system. Is that a crazy notion?

Ex-Huskers in the NFL, Week 10

"I'm having trouble sleeping," says Nebraska head coach Scott Frost, whose team is 4-5 after finishing 4-8 last season. "I usually fall asleep, then I wake up and my mind starts running and I can't get back to sleep. We're all anxious for this to get changed. I don't think there's going to be a lot of really good rest around here until we get it to where it's supposed to be."

The Big Ten announced Monday that the kickoff time of Nov. 16's matchup between Nebraska and Wisconsin at Memorial Stadium would be in the mor…

Frost hears positive fan feedback, but at times gets vibe that 'it must be getting bad out there'

"Everybody I see tells me that they knew what an undertaking this was, and that you don't fix 15 years in 18 months," the second-year Nebraska coach told the Journal Star. "But every once in awhile, someone will come up to me and say, 'Hey, don't listen to what everybody's saying.' Sometimes I think they forget you're an actual human being. Then I kind of scratch my head and think, 'Wow, it must be getting bad out there.'"

Bye weeks are a time to heal up, a time to work on fixing mistakes and a time for reflection.

Southeast grad Bryson Williams will not play against Nebraska

Lincoln Southeast graduate Bryson Williams will not get a chance to play in his return to Lincoln on Saturday.

With their statement win over Penn State on Saturday, the Minnesota Gophers climb in Parker Gabriel's weekly Big Ten power rankings. Where do the Nittany Lions and others sit?

New Blackshirts Nelson, Jackson 'exactly what you want on and off the field'

“It’s a big deal, especially with a newer staff, when you see guys that are exactly what you want on and off the field from a character standpoint and a mentality standpoint, and those guys are that.”

Defensive coordinator Erik Chinander shares news on the blackshirts and talks about preparing for Wisconsin after practice on Nov. 12, 2019.

The Joe Burrow discussion among Nebraska football fans is intriguing because it emanates from a simple question: Why did Burrow never become a legacy player at Nebraska? "It's really easy," his brother, Jamie Burrow, told the Journal Star. "At every turn, there just wasn't interest from Nebraska, for one reason or another."

A year ago against Wisconsin, Nebraska quarterback Adrian Martinez rolled up a career-best 441 total yards of offense.

Indiana head coach Tom Allen (center) celebrates Saturday with his team after their victory over Maryland in College Park, Md. on Oct. 19.