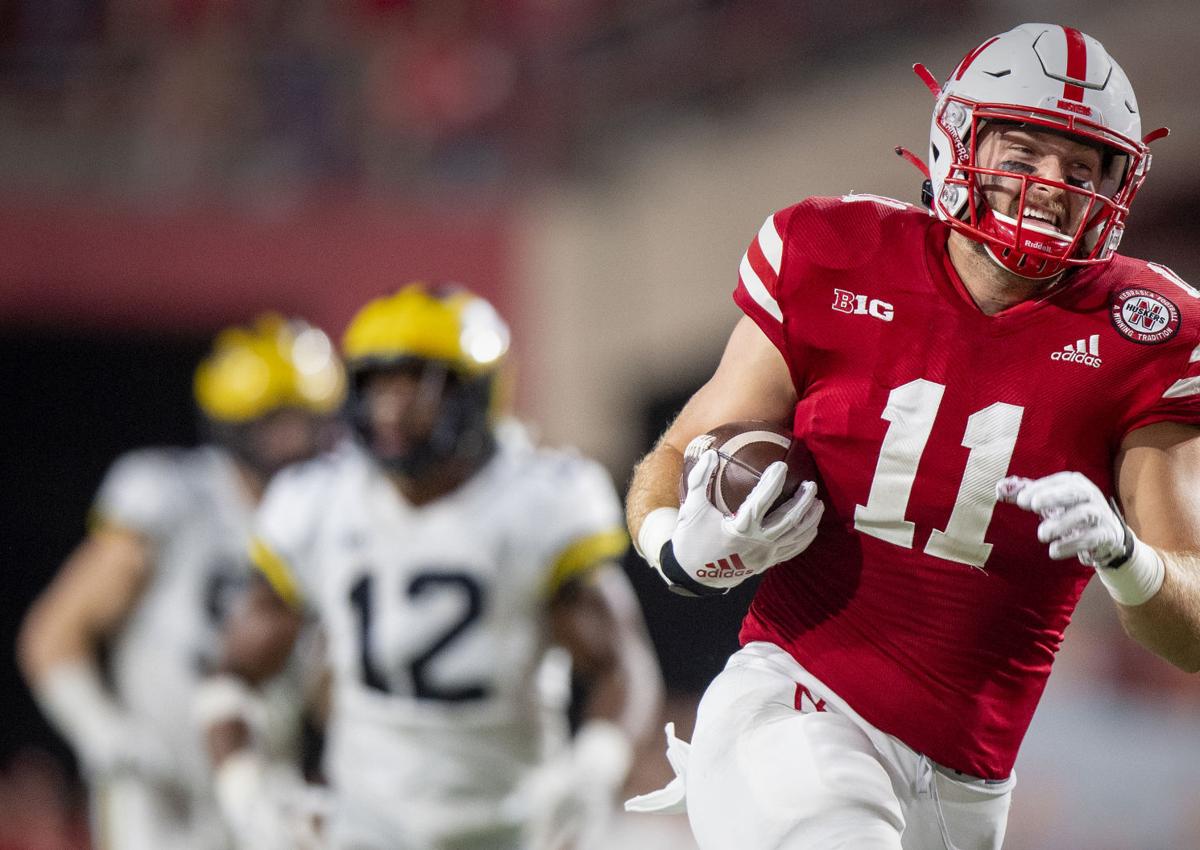 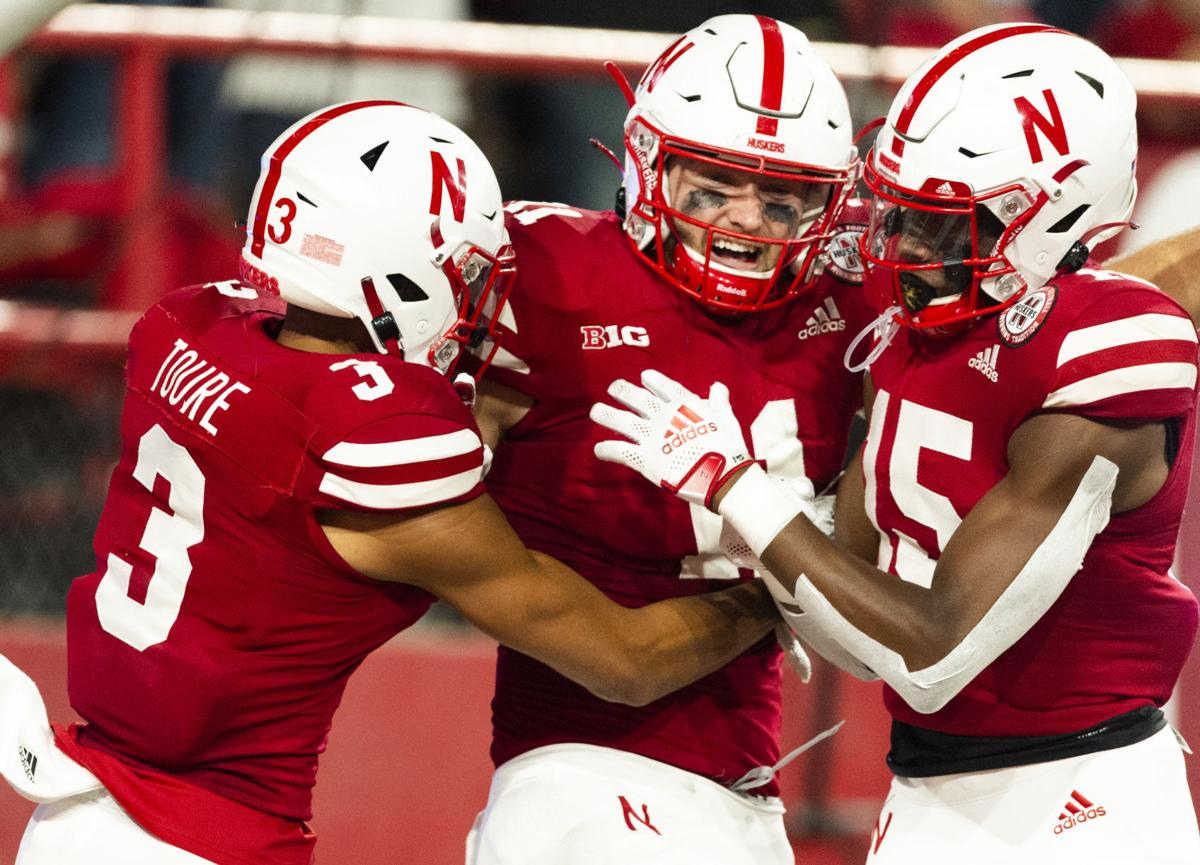 Watch now: Martinez on costly fumble: 'I thought the play was over'

Time and time again, Rahmir Johnson ran up the gut to little success during the first half of Michigan's 32-29 win at Memorial Stadium.

Nebraska’s stellar rushing attack that entered Saturday night averaging 237.5 yards per game went missing against a stout Michigan front seven, and the Huskers entered the halftime break without a point on the scoreboard.

Maybe the old game plan went to the trash can because Nebraska’s second-half turnaround came to fruition immediately.

On the opening drive of the second half, Nebraska called just one designed run. Instead, senior tight end Austin Allen split the Michigan defense for a 46-yard receiving touchdown and the Husker passing game roared to life, finally.

“We just had the mentality in the first half that we knew we had a lot of stuff left in our arsenal to run, so we were confident in that aspect,” Allen said. “We knew after the first half we could battle with those guys.”

After holding Nebraska below 100 passing yards in the first half, the Michigan defense got a taste of a clicking Husker offense the rest of the way. The Huskers went back to some of the option looks that flustered Northwestern last week, and it sprung a big play on a 41-yard touchdown toss to Rahmir Johnson.

Then, when senior safety Deontai Williams made a game-changing interception late in the third quarter, Nebraska wasted no time getting back to its passing offense. It took one throw, 13 yards from Martinez to Levi Falck, for the Huskers to gain their first lead of the game.

“We made a few adjustments that helped, and there was a great job by coach (Matt) Lubick scheming up a couple things that gave us some big plays,” said Nebraska coach Scott Frost. “Neither of us ran it down each other’s throats, so we had to hit some big plays.”

'I thought tonight was the night': Brutal trend under Scott Frost continues as No. 9 Michigan escapes Nebraska

The improvements in the passing game helped finally open up space for Johnson in the middle of the defense, too. After Martinez evaded multiple Michigan defenders to find Oliver Martin for a highlight-reel 30-yard catch-and-run during the fourth quarter, Johnson ripped off a 24-yard gain on the ground two plays later.

And when the Huskers made it to the red zone, room opened up at the line of scrimmage for Martinez to run for a 5-yard score.

Martinez completed 18 of 28 passes for 291 yards and three passing touchdowns, his first game with three passing scores since Nebraska’s 42-38 win over Illinois on Sept. 21, 2019. Martinez tacked on another 38 yards and a touchdown on the ground, while Johnson led the Huskers with 67 rushing yards and 105 receiving yards.

All 29 of Nebraska’s points came after the halftime break, with the Huskers totaling 298 of their 431 yards during the second half.

“There was a genuine belief and confidence going into this game, and those same feelings were there on those drives,” Martinez said. “I truly believe it was earned confidence that we knew we could move the ball on them.”

It was yet another stellar performance from Martinez, who is now level with Tommy Armstrong for the most 250-yard passing games in school history (14). Martinez continues to put his name all over the school’s record book — his 32 career rushing touchdowns place him level with Steve Taylor for the second-most in school history. Martinez also posted at least 300 yards of total offense for the 18th-straight game, an ongoing school record.

“I loved the way Adrian played; Adrian’s a warrior,” Allen said. “He’s my guy and I trust him back there.”

Photos: Nebraska hosts No. 9 Michigan under the lights at Memorial Stadium

Nebraska-Michigan pregame observations: Huskers appear healthy ahead of bout with Wolverines, who are without a key WR

Nebraska and Michigan are about an hour from kickoff on an overcast evening at Memorial Stadium. Here are a few pregame observations.

Chris Basnett weighs in with his report card from the Huskers' game against Michigan.

Stat tracking: The turnover battle, Nebraska's up and down night running the ball

Nebraska and Michigan met under the lights Saturday at Memorial Stadium. Here were four key statistical areas for the Huskers.

A look at some talking points after the Huskers' game against Michigan on Saturday.

A 'Clint Eastwood win:' How Michigan buckled down from its first deficit of season to thwart NU upset bid

A quick-hitting yet insightful dissection of Nebraska's loss to Michigan, including quotables, turning points and game balls.

Let's take a closer look at Huskers-Wolverines, starting off with how Nebraska's option scheme is opening the door for other opportunities.

"It's just tough," Scott Frost said of the Elkhorn South graduate's injury. "Teddy's just been improving by leaps and bounds since he got here."

Scott Frost and a few Nebraska players talked about the importance of self-care during the season, especially during the current stretch.