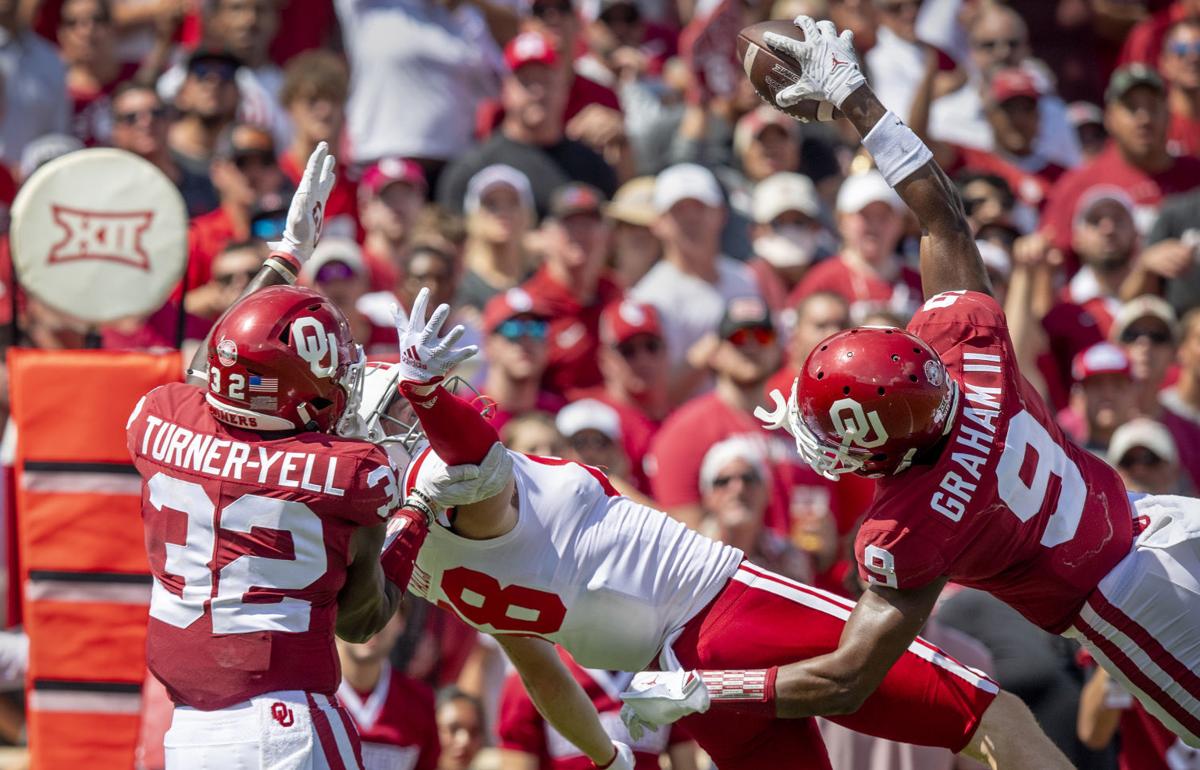 Oklahoma's D. J. Graham (9) pulls in a one-handed interception on a pass intended for Nebraska wide receiver Levi Falck (88) in the fourth quarter as Sooners teammate Delarrin Turner-Yell (32) defends on the play near the goal line Saturday in Norman, Okla. 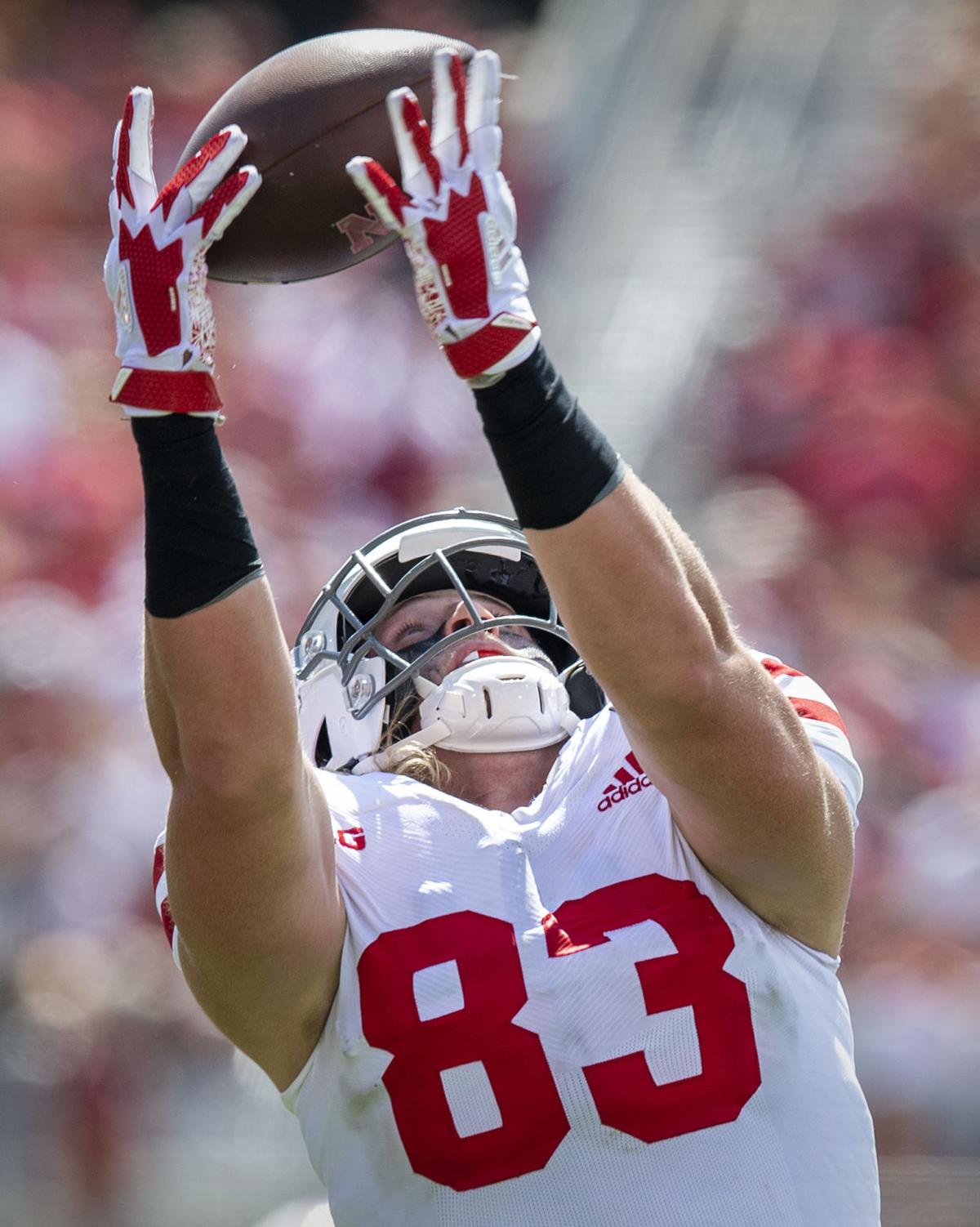 Nebraska tight end Travis Vokolek pulls in an Adrian Marinez pass for a first down against Oklahoma in the second half Saturday in Norman, Okla. 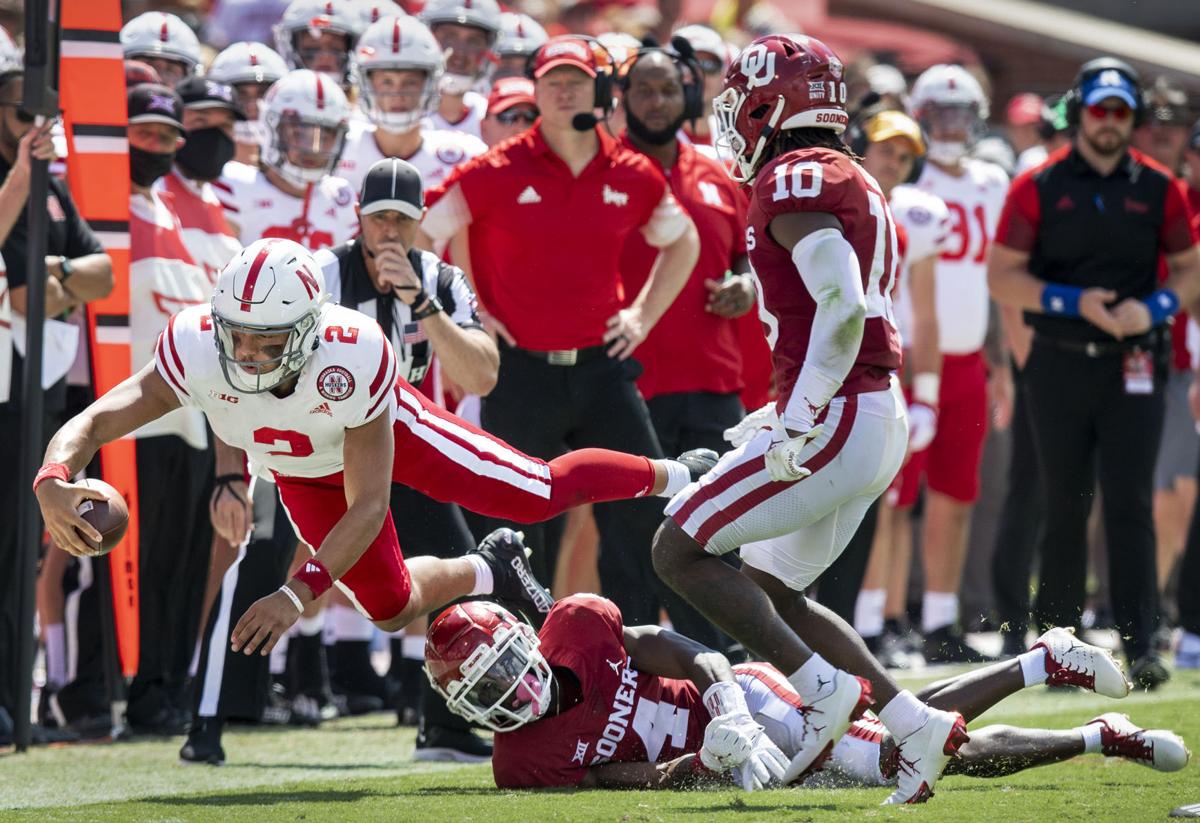 Nebraska quarterback Adrian Martinez (2) lunges forward for a first down against Oklahoma's Jaden Davis (4) and Pat Fields (10) in the third quarter as Husker head coach Scott Frost looks on Sept. 18 in Norman, Okla.

NORMAN, Okla. — Scott Frost stood in front of his team in the visiting locker room at Gaylord Family Memorial Stadium, this old building where Nebraska and Oklahoma have done battle so many times in history but not since 2008, and thought his Huskers were about to pull a shocker on the No. 3 team in the country.

The fourth-year Nebraska coach, still searching for a signature victory at his alma mater, told his team before the game started that if the Huskers got to halftime either leading or “right in the game,” he thought they’d win.

In the game, Nebraska most certainly was, thanks largely to its defense, as the Huskers trailed 7-3 at halftime.

Instead of a shocker, though, Nebraska came up short by a 23-16 margin on an afternoon that simultaneously looked and felt and proceeded like a blow-for-blow contest but also will test the extent to which silver linings or moral victories are still worth something to a team that’s been close so many times in three-plus seasons and has lost more times than it's prevailed.

“I’m proud of our players, I’m proud of our team,” Frost said after the game. “And I’m disappointed for them because we had a chance there and that would have been pretty special.”

It certainly would have been.

The head coach said Nebraska set out to minimize the number of possessions for both teams in the first half. NU won the toss, deferred and put the Blackshirts on the field, eventually getting to halftime in great shape even though the Sooners marched 75 yards on 14 plays for an opening touchdown in 6 minutes, 8 seconds.

“The game plan was executed almost perfectly at half. We were in a tight game, 7-3 I think, and then we were just going out to try to win the game,” sophomore inside linebacker Luke Reimer said.

Nebraska entered as a three-touchdown underdog in part because of its track record, of course, but also because of a perceived gulf in the overall talent level and explosiveness.

On this day, the difference was really simply about execution on offense and in the kicking game.

The Huskers advanced the ball to OU’s 33-yard line or farther five times in the opening three quarters and came away with only nine points.

“Man, if I had a nickel for everything we’re doing to try to avoid those mistakes, I’d have a lot of nickels,” Frost said. “We’ve got to lock in. I know crowd noise can be a factor, it’s a factor in our home stadium, too. The penalties don’t seem to go our way and we’ll just double down again and keep trying to make sure those things don’t happen again.”

Instead of a bounce-back from a rough start to the season for Culp, the longest kick of his career was only a momentary respite.

He missed from 50 in the second quarter and 35 on the third quarter’s opening march, squandering two more scoring chances for the Huskers and running his season tally to 3-of-8 on field goals. Culp has missed five of his last six.

“It’s really frustrating,” Jurgens said of the offense’s inability to finish drives in the end zone. “I know we gave up nine points in the kicking game, but to be honest, we need to be scoring and not leaving it up to any of that.

“If we go down there, we need to be scoring, so we’ve just got to keep working on it.”

Even when Nebraska did manage to punch in a touchdown on a short run from junior quarterback Adrian Martinez (323 total offensive yards and two touchdowns) at the end of the third quarter, the kicking game faltered. Frost called for a change after Culp’s second miss and instead of closing the gap to 14-10, freshman Kelen Meyer had his point-after attempt blocked and returned for two points.

So, OU led 16-9 after adding that three-point swing to Culp's two earlier misses.

“We spotted them nine points and lost by seven,” said senior outside linebacker JoJo Domann, who finished with a game-high 12 tackles (one for loss) and a pass break-up.

The Sooners pushed the advantage to 23-9 with a 65-yard march. They missed a field goal, too, in the second quarter, but converted their three red zone chances against a physical Nebraska defense into touchdowns.

“They’re a good team, but we were confident in our game plan and thought we could get done what we needed to get done,” said Reimer, who finished with seven tackles. “Just in the end came up a little short.”

Martinez responded with a 55-yard rainbow up the left side to freshman receiver Zavier Betts against single coverage and the Huskers halved the distance to the end zone with a sideline penalty on OU, but the drive went haywire from there.

Martinez snapped the ball as the play clock hit zero to avoid taking a penalty and lost a yard. Then he narrowly missed tight end Austin Allen in the end zone before a third-down sack. On fourth-and-17 with nearly half of the fourth quarter gone and trailing by 14, Martinez was flushed to his right and threw his only interception of the season to date.

“I don’t know what happened. We have to talk. I didn’t want to burn the timeout,” Frost said of the first-down blunder, a seemingly frequent occurrence for NU after big offensive plays. “We called trips right, it either got signaled in wrong or they lined up wrong. Adrian made a decision not to burn a timeout and to try to get what he could on the play. Those things can’t happen. I don’t know exactly what happened. I wasn’t watching the signaler, but that was costly.”

The interception hardly tells Martinez’s story for the day. He was Nebraska’s best player again and continued to walk the line between making the plays he’s supposed to make and then pulling Houdini acts when the pocket broke down.

The Fresno, California, native completed 19 of 25 passes for 289 yards and repeatedly turned nothing into something with his legs.

“I think he’s been balling out the entire season,” Jurgens said. “I’m so proud of (him). That guy’s a gamer and he’s been leading us. I’m so proud of that man and I’ll follow him anywhere.”

A three-and-out from the defense set up Nebraska’s offense in good shape, and Martinez hit Omar Manning for a touchdown with 5:38 remaining to get within seven.

Lincoln Riley’s team couldn’t quite bleed the rest of it off the clock, but it did whittle it to 57 seconds before punting the ball back to Nebraska. The Huskers’ last-gasp, desperation drive was finished almost as quickly as it started when they gave up a sack on a seven-man protection on the first play.

The final miscue wasn’t a red zone error, but it spoke to the overall hill Nebraska was unable to overcome.

And yet, Nebraska now heads into the teeth of its Big Ten slate. Beginning Saturday, a critical four-game run — at Michigan State, vs. Northwestern, vs. Michigan and at Minnesota — before a late-October bye week starts with one more close call rather than the best win in the program’s recent history because of, essentially, most of the same problems that have dragged against forward momentum like an anchor all along.

Too many self-inflicted errors and too many missed opportunities.

“I told them after the game, everything they want to accomplish this year is right in front of them,” Frost said of his players. “We’re going to get more opportunities to win a big game, but if they play like that, like we played today, all year and fight that hard all year, we’re going to have a chance in a lot of games.”

They had a chance to win this one, too, and didn’t get the job done.

Photos and videos: Oklahoma holds off Nebraska 50 years after the Game of the Century

Here's our deep dive into the stats — a look at some areas of focus coming into the game and how they played out in a loss to the Sooners.

The Scene: Walking the sidelines with his QB recruit son, Dominic Raiola shares his own NU-OU memories

Dominic Raiola was in Oklahoma to join his QB son on a visit. But it gave NU's former Rimington Award winner a chance to see a rivalry renewed.

'That's what we needed': How did they survive NU scare? Sooners point to blocked extra point

The Sooners popped a big play Saturday. But it wasn't the offense. No, it was a blocked extra point and subsequent return with a steal-your-mojo play.

'We're not after good': Blackshirts give Huskers a shot, but defenders insist there's still more in the tank

The numbers say Nebraska did things not many defenses have been able to do to the Sooners since Lincoln Riley took over at OU in 2017.

Nobody can question Nebraska's fight. You've seen tangible progress in the program the past three games. But can NU stop getting in its own way?

Viewpoints on Oklahoma's seven-point win over Nebraska on Saturday, including trips to the Sooners' locker room and Twitter.

Nebraska's "twin towers" at tight end figure to be on the field at the same time a lot moving forward — just in time for the Big Ten gantlet.

The sixth-year Husker safety made an astute observation before Oklahoma's big gain on a trick play. He takes blame for not communicating it.

Oklahoma's D. J. Graham (9) pulls in a one-handed interception on a pass intended for Nebraska wide receiver Levi Falck (88) in the fourth quarter as Sooners teammate Delarrin Turner-Yell (32) defends on the play near the goal line Saturday in Norman, Okla.

Nebraska tight end Travis Vokolek pulls in an Adrian Marinez pass for a first down against Oklahoma in the second half Saturday in Norman, Okla.

Nebraska quarterback Adrian Martinez (2) lunges forward for a first down against Oklahoma's Jaden Davis (4) and Pat Fields (10) in the third quarter as Husker head coach Scott Frost looks on Sept. 18 in Norman, Okla.