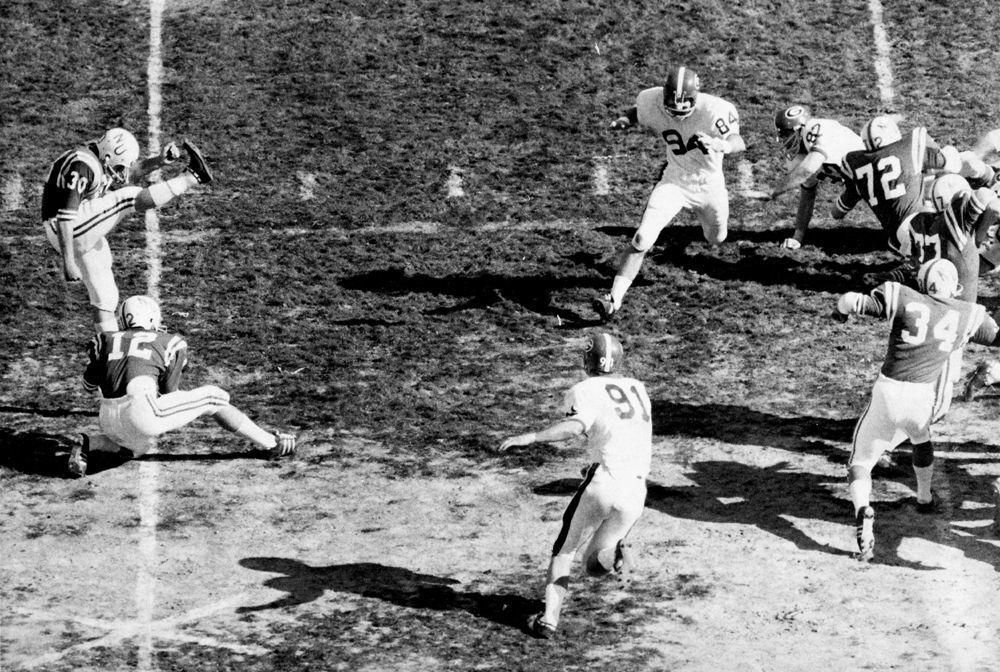 Paul Rogers boots one of his four field goals in the 1969 Sun Bowl against Georgia.

One of his high school football coaches, 1953 Heisman Trophy winner Johnny Lattner, told him so.

But Carstens will never forget the 1968 season opener when Nebraska hosted unranked Wyoming and needed a cool and collected sophomore named Paul Rogers to come through in the game's final 21 seconds.

Rogers booted a 51-yard field goal to lift the Huskers to a 13-10 victory.

It was Carstens' (then a redshirt freshman) introduction to the kicker from Iowa, and a reminder that Carsten probably wasn't going to be needed for kicking on Bob Devaney's team.

"That thing, it probably would have made it from 71 yards," Carstens recalls.

Now jump two years to 1970. Nebraska had one of the nation's top defenses, and it had an offense that could score a lot of points (65 against Oklahoma State this weekend 50 years ago).

But the Cornhuskers also had some dynamic weapons on special teams. There of course was Johnny Rodgers and his ability in the return game.

Not to be overshadowed were the legs of Rogers and punter Jeff Hughes. Together, they helped lead Nebraska's march to a national championship in 1970.

"The thing about those two guys," Carstens said, "they were humble and they were such team players."

They also were outstanding athletes.

But in the 1960s and 1970s, kickers and punters also played other positions, and Nebraska had two who could do it all.

Rogers came to Nebraska to play running back and he started at right halfback in 1967.

Rogers later moved to defensive back before his full focus turned to kicking.

"The problem with that, he was such a good kicker, they didn't want to get him in the game to play in the offense and defense — my own personal opinion — they were afraid he was going to get hurt," Schneiss said.

Hughes carried the label as punter but he was one of the best athletes on the 1970s team. Sports Illustrated listed him as one of the greatest athletes to come out of his home state of Vermont where he also was an All-American hockey player.

He was super-fast, too, running a 100-yard dash in 9.6 seconds and the 200 in :21.12. The Nebraska track coaches lured him to run track at Nebraska, but Hughes asked if there was a chance to play football, too.

A week later, Devaney and Tom Osborne, after watching his film, called Hughes and offered a football scholarship.

"Usually one of the guys that started in the backfield was the punter and then you returned kickoffs, you returned punts," Hughes said this week from his Florida home. "You played the whole game, you never came off the field.

"Paul did that, I did that, Jeff Kinney, we all did it. Johnny Rodgers, he played defense."

Hughes had his sights set on one of NU's skill-position spots during his first few seasons. Rodgers impressed the coaches and passed Hughes on the depth chart.

"They tried him at some different spots, but they really wanted to make sure in case John got hurt that they had another guy back there," Schneiss said of Hughes, who also was slowed by a blown shoulder.

"Jeff kept us in tremendous field position, just from his punting," Carstens said. "There was never an issue. I don’t think he ever lost a snap from center, I don’t think he ever had a bad kick. It was amazing and his athletic ability … that guy is the greatest athlete to come out of the state of Vermont. He was so fast."

Talk to some former Huskers, and they'll tell you Rogers' foot played a role in saving Devaney's job.

The Rock Rapids, Iowa, native made three game-winning field goals in 1968, helping Nebraska take off for the great run that started in 1969, which included a four-field goal showing against Georgia in the Sun Bowl.

"We lost to Oklahoma on national TV 47-0 (in 1968)," Carstens said of Rogers, who passed away in 2018. "Devaney was halfway out the door and Paul saved his job with a couple of those winning field goals. He was a very, very special kicker."

Rogers, who also was moved from wingback to make room for Rodgers, also booted a school-record 55-yard field goal against Kansas in 1969, a mark that didn't fall until Alex Henery booted a 57-yarder against Colorado in 2008.

"Yeah, Devaney had a special place in his heart for him, that’s for sure," Schneiss said.

Nebraska showed its superiority and its right to its No. 4 national ranking with a victory against Kansas in 1970 to push its unbeaten streak to 13.

The Nebraska squad voted to award the game ball to the defensive unit, and head coach Bob Devaney couldn't have agreed more with that move.

The Huskers went on more long marches than a Boy Scout troop during the afternoon, according to a story from Oct. 4, 1970.

The Huskers were the No. 9 team in the nation going into that game on the West Coast, and still a 13-point underdog to the Trojans.

A last-second pass breakup preserved a 21-21 tie with the Trojans.

Bill and Jesse Kosch have been part of five Nebraska national titles. But Bill makes sure his son knows none were as important as the first.

Revisiting Johnny Rodgers' first varsity game for the Huskers, and the story of how Bob Devaney steered him from USC.

The Big Ten announced Monday morning the Week 3 schedule and the Huskers and Wildcats will kick off at 11 a.m. at Ryan Field in Evanston, Illinois.

Jerry Tagge came out of the proverbial bullpen for the Huskers in Ames and directed an awesome attack against the Cyclones.

Nebraska whipped the Kansas State, 51-13, to clinch at least a tie for the Big Eight title in 1970, their sixth in the last eight years.

Awaiting the team at the hotel was a case of champagne.

Paul Rogers boots one of his four field goals in the 1969 Sun Bowl against Georgia.