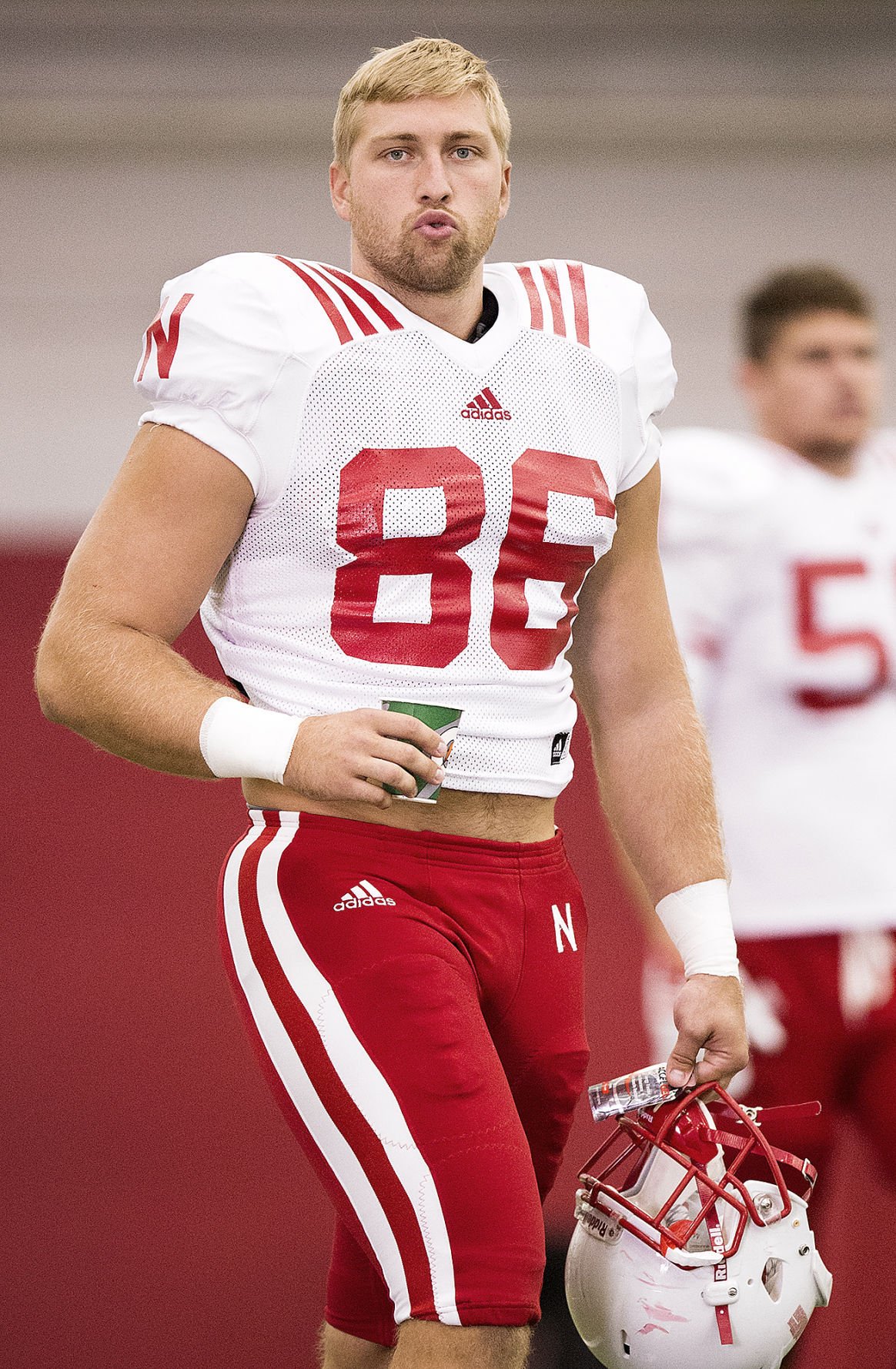 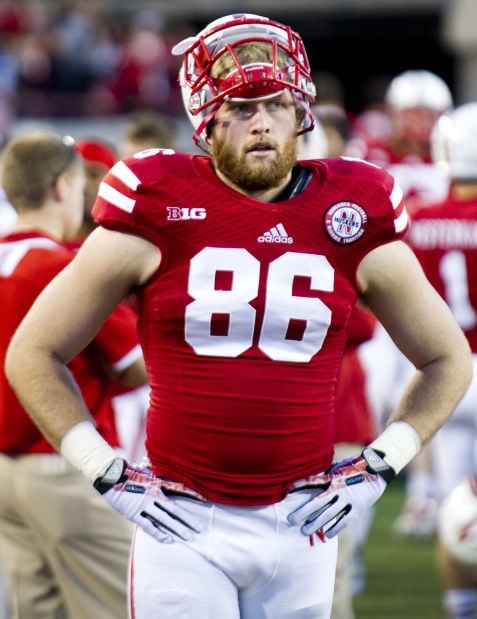 Nebraska tight end David Sutton (86) reacts to the game during the third quarter against Michigan State at Memorial Stadium on Saturday, Nov. 16, 2013.

David Sutton was in class that Thursday morning when the news hit him with the same surprise so many around here felt. Nebraska hires … Mike Riley?

Sutton knew the name. He knew the coach was from Oregon State. He needed to know a lot more. A Google search was about to give him a jolt.

His research took him to a stats page of Oregon State's leading receivers in 2014. “Right off the bat I saw two of their top five receivers last year were tight ends, and I was like, ‘Oh, my gosh, there’s definitely going to be an opportunity when they get in here.'"

The excitement was only building.

Soon enough, Sutton and the tight ends were having a get-to-know-you meeting with graduate assistant Tavita Thompson, who works with the Husker tight ends just as he did for Riley at Oregon State.

Now, the fifth-year senior from Lincoln Southeast, who wouldn’t still be in a Husker uniform without a strong mixture of patience and persistence, uses “fun” to describe the dog days of fall camp.

“It’s definitely been a very fun transition,” he said.

He is yet to catch a pass in his career. But what matters now is this season, and it looks as if Sutton is about to have an extended role in his final season.

“It definitely didn’t happen as I planned it. I just wanted to persevere,” Sutton said. “It definitely wasn’t easy. But I chose to play football. I definitely had a future in baseball as well. But at the end of the day, Nebraska was the school.

"I grew up in Lincoln and this was the place that I wanted to be. … I had put in four years. I was coming into my senior year. I was like, ‘Why not?’ Just stick it out. Just give it one last go.”

During a summer interview, offensive coordinator Danny Langsdorf mentioned Sutton as a tight end option he liked in addition to juniors Cethan Carter and Sam Cotton.

He described Sutton and Cotton as "good grinders" at tight end. “They can line up and beat a linebacker one-on-one, but they can also bang on a defensive end and give us some lead in the run game," Langsdorf said.

While there are growing pains figuring out a new offensive system, Sutton feels it has the potential to be “dynamic” this fall.

“As we keep installing … you can just see everything evolve," he said. "I think that this can be a really exciting, playmaking offense. It’s going to be different than what people are used to. Because, last year, the past four or five years really, we were a no-huddle team. We would line up on the ball as quick as we could and we would go, go, go, go. We would try to wear defenses down. This is definitely much different. We’re a huddle-up, pro-style offense, and it’s just a lot of fun.”

When Sutton came out of spring ball, Thompson told him he had as good a shot as anybody. Just keep doing the same stuff.

Sutton wants to keep showing his versatility. Sure, he’d like to catch some passes. But there's more to it.

“We want to be a very strong running team, and I know with my size and strength I can be a focal point in that area. So I just want to be a balanced guy.”

He was plenty balanced as a multi-sport star in high school. Sutton was a really good baseball player. He played outfield and could really hit.

After his junior year at Southeast, he got a chance to play for the Nebraska Sluggers select team, which may have led to more scholarship opportunities in baseball. But Sutton grew a lot that year and the Huskers were knocking on the door.

Football was his choice.

It didn't always go as planned, but ask him about that choice now and you won't hear any regret.

“If you would have sat here and asked me this one year ago, obviously hindsight’s 20-20, but, obviously, my answer could have been different just because the situation was so different," he said. "But looking back on it, I don’t think I would do it any other way.”

Freshmen will have a say in starting safety job

As a former defensive coordinator, Brian Stewart understands the importance of placing a talented, coveted newcomer at the position that best …

Playing with edge, Utter in line for starting job

Dylan Utter spent the first three seasons of his Nebraska football career with the typical chip-on-shoulder approach taken by many in-state walk-ons.

With major changes on both sides of the ball, virtually every minute of Nebraska's preseason camp is important. Hence the clear feeling of urgency, Steven M. Sipple writes.

Langsdorf likes receiver options, but knows much work ahead

"I think that’s where this summer is going to be important, especially for the quarterbacks to get with the receivers and complete one-on-one passes."

Tommy Armstrong talks about letting the seniors down

Tommy Armstrong talks about letting the seniors down

Jack Gangwish talks about the loss to Iowa

Jack Gangwish talks about the loss to Iowa

Nebraska tight end David Sutton (86) reacts to the game during the third quarter against Michigan State at Memorial Stadium on Saturday, Nov. 16, 2013.